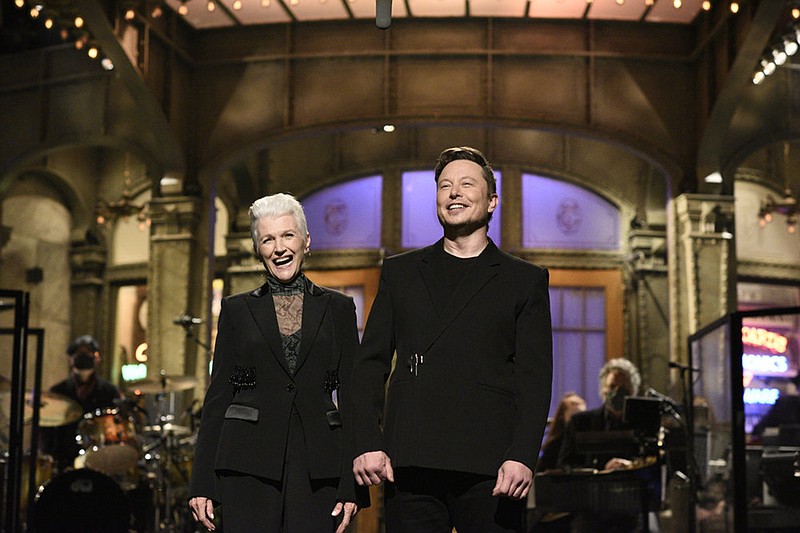 Saturday Night Live host Elon Musk with his mother, Maye, during the monologue on May 8, 2021. (Will Heath/NBC/TNS)

Maye Musk wants all women to feel confident in their swimwear.

The longtime model -- and mother of Tesla and SpaceX Chief Executive Elon Musk -- just made history on the cover of Sports Illustrated's swimsuit edition. At age 74, she's the oldest woman to grace the cover of the magazine's annual issue -- and she has a message for women everywhere.

"When women go to the beach, we're kind of shy about our bodies, but men will walk around, looking terrible, and they don't care," she told People. "I think we have to not care that much!"

Musk herself is no stranger to the bright lights. She first began modeling at age 15 while living in South Africa, later coming in as a finalist for the 1969 Miss South Africa beauty competition.

However, her profile skyrocketed in recent years after she posed nude for Time magazine's health issue in 2011. Soon after, she became Covergirl's oldest spokesmodel at age 69 and also appeared in Beyoncé's "Haunted" music video at age 65.

"I didn't think age would be a problem because as a dietician and a scientist, age is not a problem," Musk told Sports Illustrated. "I'm just so happy that people are actually booking me for talks on ageism and how to feel good about yourself at any age. I'm also very proud that I can give a message to women in the world to aim for happiness, do things you like to do, mix with nice people, be kind to everyone because you never know and pursue whatever you'd wish to do. I really am living the best life ever, and I never expected it."

As part of the cover package, Musk's son Tosca wrote a heartfelt letter to his mother, admiring her journey and accomplishments. Remarking how his mother "wasn't like the other mothers I knew growing up," he praised her work ethic and ability to reinvent herself, while also calling her the most fearless woman he's ever known.

"My whole life, I've seen my mom do everything," he wrote.