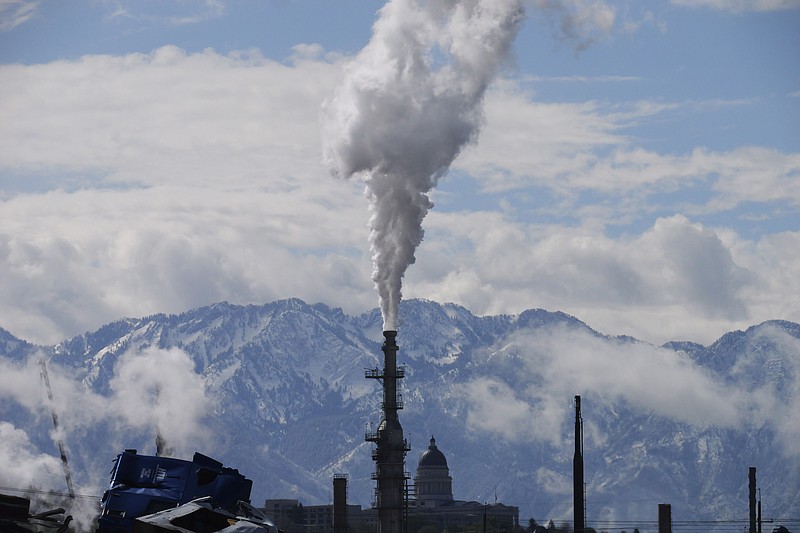 The Utah State Capitol, rear, is shown behind an oil refinery on Thursday, May 12, 2022, in Salt Lake City. A growing number of Republican-led states with economies that rely heavily on fossil fuels are pushing back against shifts in the financial industry to consider new factors such as environmental risk in their investment decisions. (AP Photo/Rick Bowmer)

SALT LAKE CITY -- Republicans are coming out swinging against Wall Street's growing efforts to consider factors like long-term environmental risk in investment decisions, the latest indication that the GOP is willing to damage its relationship with big business to score culture war points.

Many are targeting a concept known as ESG -- which stands for environmental, social and governance -- a sustainable investment trend sweeping the financial world. Red state officials deride it as politically correct and woke and are trying to stop investors who contract with states from adopting it on any level.

For right-wing activists who previously brought criticisms of critical race theory (CRT), diversity, equity and inclusion (DEI) and social emotional learning (SEL) to the forefront, it's the latest acronym-based source of outrage to find a home at rallies, in conservative media and in legislatures.

ESG has yet to take hold as mainstream political messaging, but backlash against it is gaining steam. Last week, former Vice President Mike Pence attacked the concept during a speech in Houston. And on Wednesday, the same day he said on Twitter he planned to vote Republican, Elon Musk attacked it after Tesla lost its place on the S&P 500′s ESG Index. He called it a scam "weaponized by phony social justice warriors."

The concept calls on investors to consider criteria such as environmental risk, pay equity or how transparent companies are in their accounting practices. Aided by recently proposed disclosure requirements and analysis from ratings agencies, they have adopted the principles to such an extent that those who use them control $16.6 trillion in investments held in the U.S.

In response, Republicans -- historically known for supporting fewer regulations -- are in many places attempting to impose new rules on investors. Their efforts reflect how members of the party are willing to distance themselves from big business to push back against those they see as ideological foes.

"We focus on sustainability not because we're environmentalists, but because we are capitalists and fiduciaries to our clients," Larry Fink, CEO of investment firm BlackRock and a leading proponent, told clients in a letter this year.

But Moore and others including Utah's Republican state treasurer Marlo Oaks argue favoring green investment over fossil fuels denies key industries access to the financial system and capital. They have targeted S&P Global Ratings for appending ESG scores to their traditional state credit ratings. They worry that without changes, their scores could make borrowing for projects like schools or roads costlier.

In an April letter, Oaks demanded S&P retract analysis that rated Utah as "moderately negative" in terms of environmental risk due to "long-term challenges regarding water supply, which could remain a constraint for its economy ... given pervasive drought conditions in the western U.S."

The letter was co-signed by the governor, legislative leaders and the state's congressional delegation, including Sen. Mitt Romney, whose former firm Bain Capital calls ESG factors "strategic, fact-based and diligence-driven." It said ratings system "attempts to legitimize a dubious and unproven exercise" and attacks the "unreliability and inherently political nature of ESG factors in investment decisions."

Though he likened ESG to critical race theory, Oaks said he was mostly concerned with capital markets and what he called attempts by fossil fuel opponents to manipulate them by pressuring investors to pick businesses with high ESG scores.

"DEI, CRT, SEL. It can be hard to keep up with the acronyms," he wrote on an economics blog last month, "but there's a relatively new one you need to know: ESG."

In more than a dozen red states, officials dispute the idea that the energy transition underway could make fossil fuel-related investments riskier in the long term. They argue employing asset managers with a preference for green investments uses state funds to further agendas out of sync with constituents.

In statehouses, anti-green investing efforts are backed by conservative groups such as the American Legislative Exchange Council and the Heartland Institute, a think-tank skeptical of scientific consensus on human-caused climate change that has backed bills that either divest state funds from financial institutions that use ESG or forbid them from using it to score businesses or individuals.

After conservative talk show host Glenn Beck visited the Idaho Statehouse and referred to ESG as critical race theory "on steroids," the Legislature passed a law in March prohibiting investment of state funds in companies that prioritize commitments to ESG over returns.

Though the policy doesn't mention it outright, Jonathan Williams, the group's chief economist, said ESG's mainstreaming amid broader trends of political correctness was a driving force. He said his research shows that incorporating factors beyond traditional financial metrics can lower the rate of return for already underfunded state pensions.

Sustainable investing advocates deny that charge and say considering the risks and realities of climate change amounts to responsible investing.

Though it's drawing enthusiasm, the green investment discourse differs from recurring debates over gender and sexuality or how history is taught. Both proponents and detractors acknowledged they're surprised pensions, credit ratings and investment decisions have become campaign rally fodder.

Last month at the Utah state party's convention, thousands of Republicans roared when Sen. Mike Lee described green investment in similar terms to critical race theory -- another acronym-based foil: "Between CRT and ESG and MSNBC, we get way too much B.S.," Lee said.

Bryan McGannon, a lobbyist with US SIF: The Forum for Sustainable and Responsible Investment, said opponents were wrong in framing sustainable investing trends as political. If states refuse to reckon with how the future will likely rely less on fossil fuels and limit how environmental risk can be considered, he said, they're making decisions with incomplete information.

"If a state's not considering those risks, it may be a signal to an investor that this might not be a wise government to be putting our money with," McGannon said. "Investors use a huge swath of information, and ESG is a piece of that mosaic." 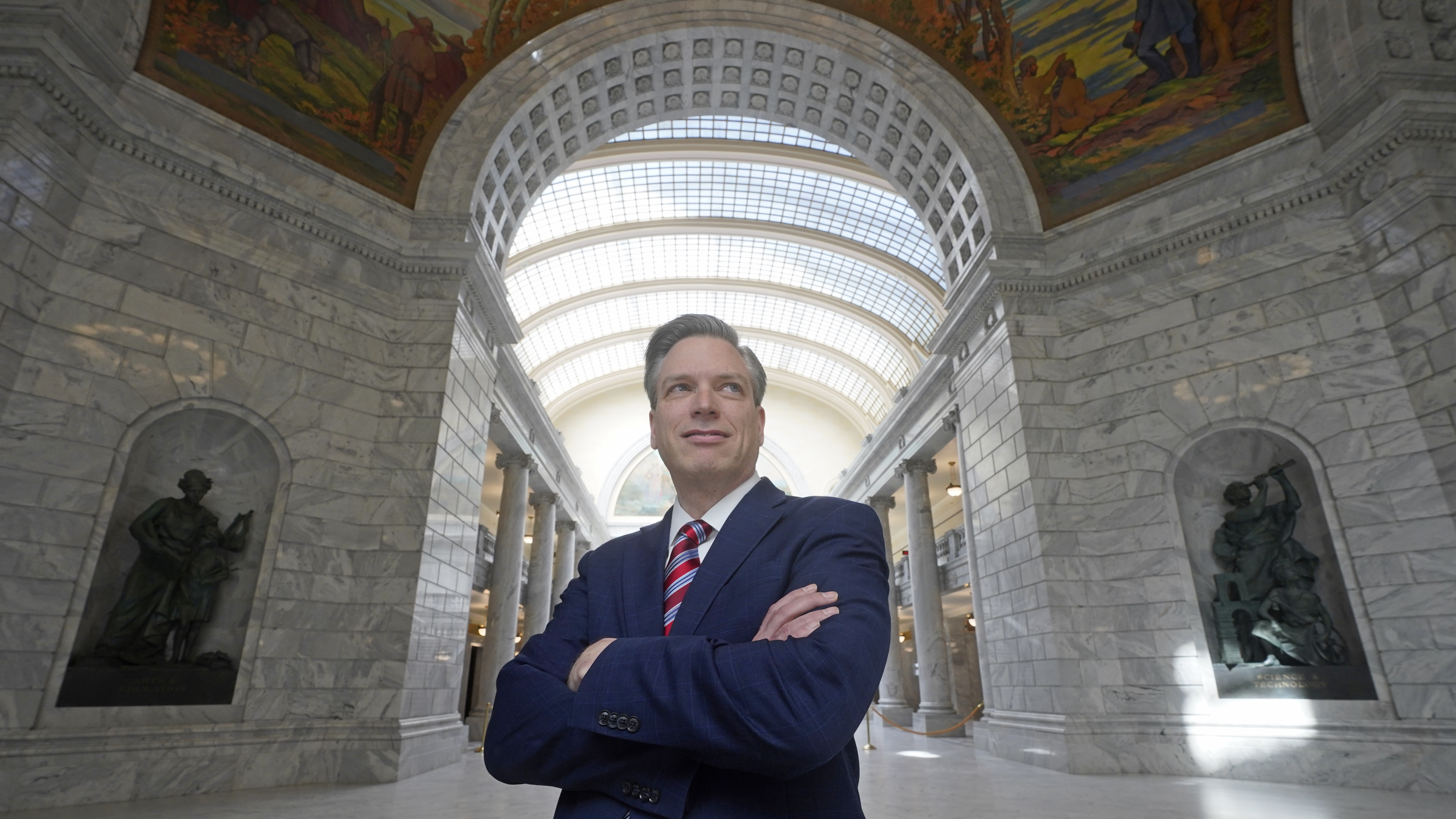 Utah Treasurer Marlo Oaks poses for a photograph at the Utah State Capitol on May 5, 2022, in Salt Lake City. A growing number of Republican-led states with economies that rely heavily on fossil fuels are pushing back against shifts in the financial industry to consider new factors such as environmental risk in their investment decisions. (AP Photo/Rick Bowmer)