WITH POLL | ‘Inherent in Christianity is free will’: Religious backers of abortion rights say God’s on their side 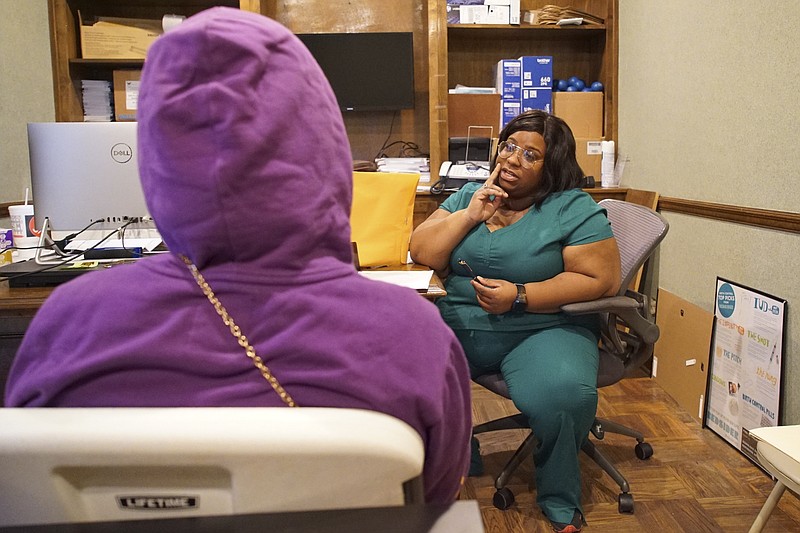 Head nurse Francia Webb talks to a client about abortion options at the West Alabama Women's Center in Tuscaloosa, Ala., on Monday, March 14, 2022. Webb says her experience suffering a miscarriage at five months has given her "a testimony" that she can share with clients considering ending a pregnancy. "By working here, I feel like it's like a blessing. Because I can minister and talk to people in all different kinds of ways, other than just abortion." (AP Photo/Allen G. Breed)

TUSCALOOSA, Ala. -- It was lunch hour at the abortion clinic, so the nurse in the recovery room got her Bible out of her bag in the closet and began to read.

"Trust in the Lord with all your heart, and lean not on your own understanding," her favorite proverb says, and she returns to it again and again. "He will make your paths straight."

She believes God led her here, to a job at the West Alabama Women's Center, tending to patients who've just had abortions. "I trust in God," said Ramona, who asked that her last name not be used because of the volatility of America's abortion debate.

CAN'T SEE THE POLL QUESTION? Read the story at TexarkanaGazette.com/news/polls

Out in the parking lot, protesters bellowed at patients arriving for appointments, doing battle against what they regard as a grave sin.

The loudest voices in the abortion debate are often characterized along a starkly religious divide, the faithful versus not. But the reality is much more nuanced, both at this abortion clinic and in the nation that surrounds it. The clinic's staff of 11 -- most of them Black, deeply faithful Christian women -- have no trouble at all reconciling their work with their religion.

And as the U.S. Supreme Court appears poised to dismantle the constitutional right to an abortion, they draw on their faith that they will somehow continue.

God is on our side, they tell each other. God will keep this clinic open.

Robin Marty, who moved from Minneapolis to Tuscaloosa a couple years ago to help run this clinic, was surprised to hear nurses pray for guidance as the future of abortion grows uncertain.

"That is one of the things that has caused a whiplash for me -- I had this stereotype in my head of a Southern religious person," said Marty. "I just assumed that there was no compatibility between people who are religious and people who support the ability to get an abortion."

Marty realized she was wrong . It's a common error.

"We need to have a real conversation about what we describe as Christianity," said Kendra Cotton, a member of the Black Southern Women's Collective, a network of Black women organizers, many of them from faith-based groups.

The white evangelical worldview that abortion is murder has consumed the conversation, flattening the understanding of how religion and views on abortion truly intersect, she said.

Before Roe v. Wade, faith leaders in many places led efforts to help pregnant women access underground abortions, because they considered it a calling to show compassion and mercy to the most vulnerable.

For faithful women of color, there's often a very different balancing act of values when confronting the question of whether women should be able to end unwanted pregnancies, Cotton said.

"We know that Christianity supports freedom, and inherent in freedom is bodily autonomy. Inherent in Christianity is free will. When people talk about the body being a temple of God, you have purview over your body, there is nothing more sacred," Cotton said.

The idea of the state restricting what a person can do with their own body is in direct conflict with that, she said, and it is reminiscent of being under someone else's control -- of slavery.

"You don't get to tell me what to do," Cotton said.

In Tuscaloosa, the West Alabama Women's Center sits on the edge of a nondescript medical plaza, a half-mile from the University of Alabama campus. Though many of the center's clientele are college students, others come from all over the state and some surrounding ones -- it is the only abortion clinic for two hours in every direction. Many of their clients are Black, many already have children and more than 75% survive below the poverty line.

Every patient comes into Ramona's recovery room after their abortion. She keeps the lights low. Working here, to her, feels like a righteous calling. She believes the Christian way is to love people where they are, and that means walking kindly with them as they make the best decision for themselves.

Sometimes they cry, and tell her they didn't want to be there. She's heard stories of rape and domestic violence, but most talk about fear of having more mouths they can't afford to feed. She always says, "I understand."

"I mean that, I do understand, I've gone through that myself," she said.

Ramona, 39, is a single mother of four children, and had her first child at 16. She sometimes imagines what her life might have been had she started her family later. She had to drop out of college. There were times, when her children were young, when she couldn't pay the gas bill, and she boiled water so they could have warm baths.

"Women go through so much, it's hard," she said. "So you should have that choice, whether or not you're ready to be a mother. No one else should choose for you."

Her daughter used to say "Mom, I want to be just like you," and she would stop her. "No ma'am," she'd say to her. "I want you to be better." Her daughter is now 22 and studying to be a doctor.

She clawed herself out of poverty and built a life she loves. Her co-worker at the front desk calls her Miss Wonderful -- she's at peace with God, she said, so every day is a great one.

For a time, she tried to be friendly with one of the regulars who protested outside, trying to convince patients that abortion is murder and they shouldn't go in. She'd visit on her breaks or as she was leaving for the day. They discussed Scripture, forgiveness, sin.

She'd say, "I can see where you're coming from. Can you see where I'm coming from? I'm not going to love you any less because of what you believe in or what you think."

Then one day she was walking by and he shouted at her: When you die, you know where you'll be going, and it isn't heaven. She doesn't talk to him anymore.

Alesia Horton, the clinic's director, eyed the protesters from the window.

"I don't know what Bible they're reading, 'cause it's not the one that I read," she said. She and Ramona have been friends since childhood and share a Christian faith.

If people heard the stories she had inside this clinic, she can't imagine trying to mandate that people be forced into motherhood. She had a patient once who had cancer, wanted the child but couldn't continue chemotherapy while she was pregnant. She had to choose between her own life and the child she wanted.

Just two weeks before, Horton wept when she met a 13-year-old who'd been raped, and she can't shake the look on the child's face, staring blankly in the exam room.

"It's going to be OK. Don't think you did anything wrong because you didn't," Horton told her.

She often hears patients cry that they're going to go to hell.

"I've had patients against abortion until it happened to their child, or it happened to them," she said. "The first thing they say, 'I don't believe in this.' And I say, 'Let's get past that. Now that you're pregnant, what are you doing to do? Are you still not going to believe in this? Now you're on the other side. Where you were judging, now it's you.'"

They pray that the Supreme Court won't overturn Roe v. Wade, because they know their poorest patients will bear the burden of abortion bans. Wealthy women will always find a way. They can travel to states where abortion is legal and all the headaches that entails: time off work, babysitters, a tank full of gas, hotel rooms.

If Roe falls, abortion would be barred in Alabama in almost every instance. A 2019 state law, put on hold by the courts for now, outlaws the procedure in all but emergency cases. This clinic is going to try to stay open for those left behind. It is expanding into a full-service gynecological office that people can turn to if they self-administer an abortion and require medical attention, without fear that someone will report them to the police.

In the meantime, the ideological gulf between the believers inside and outside remains wide.

Some of the protesters outside stand quietly, holding signs and hoping their silent presence rattles patients enough to head back to their cars and go home. Some shout at patients as they walk through the parking lot into the clinic, trying to hand them leaflets or direct them to the anti-abortion crisis pregnancy center next door. Some say they want abortion barred completely, with no exceptions even for rape or life-threatening complications, because they believe abortion is murder no matter the circumstances. Most would not give their names; the pregnancy center declined an interview.

The protesters are sometimes aggressive: They have screamed into the clinic's back doors, recorded biohazard bins being carted away, called police if a patient lashes out when they tell them they're going to hell.

The clinic locks the doors for security reasons during the lunch hour between morning and afternoon appointments. On a recent day, as Ramona read her Bible in the back room, a 23-year-old woman arrived and couldn't get inside.

A group of protesters beckoned the woman, who did not want to be named. She was confused -- perhaps these people worked for the clinic. "We can help you," they told her.

"I just walked over there and had a million things thrown in my face," the woman said. "I'm a baby killer, I'm a murderer."

She ran away weeping. The clinic staff heard and sought her out.

She glared at the protesters from the window. 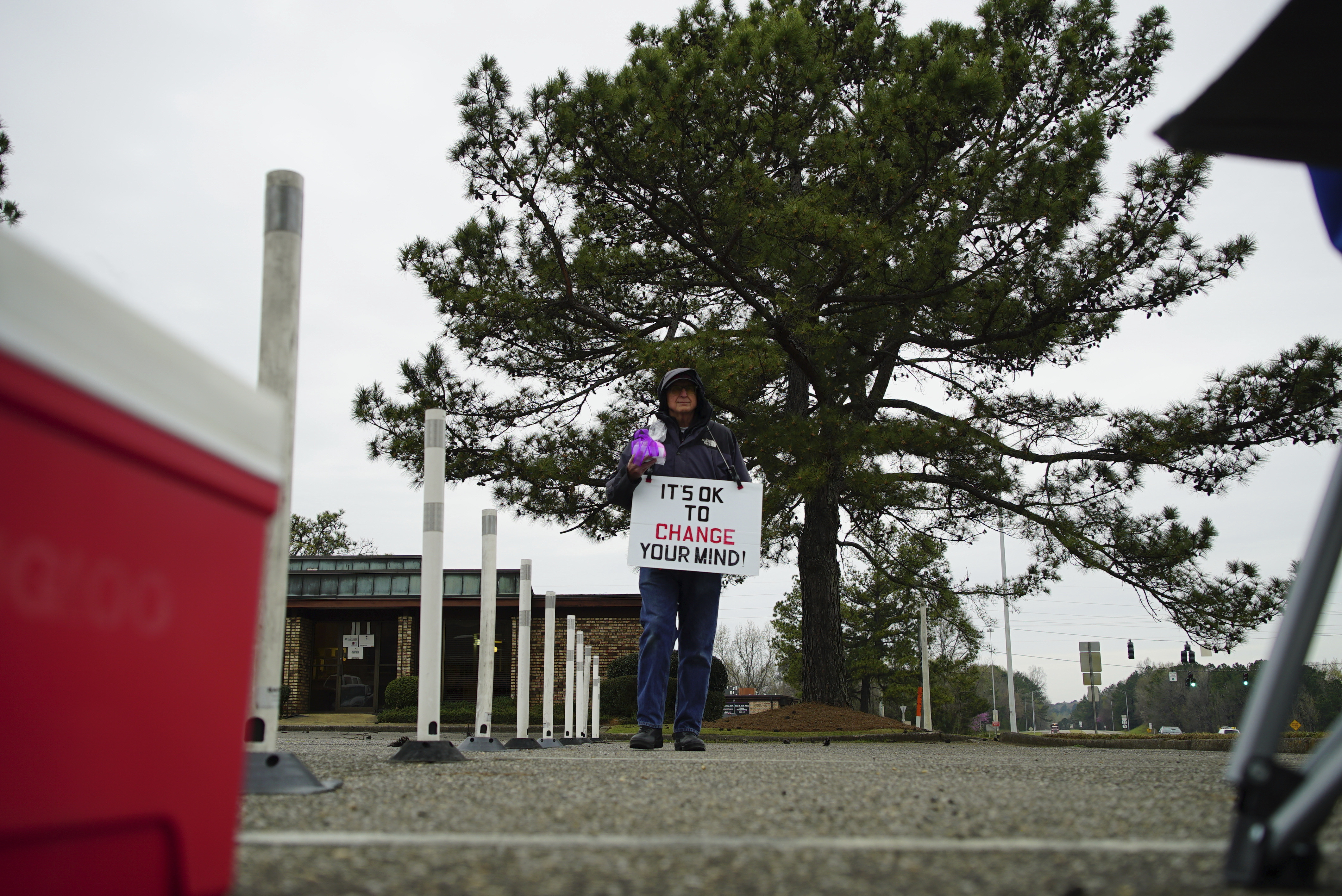 A protester paces the parking lot of the West Alabama Women's Center in Tuscaloosa, Ala., on Tuesday, March 15, 2022. The man belongs to a North Carolina-based Christian group called Love Life, which tries to convince people not to have an abortion. (AP Photo/Allen G. Breed) 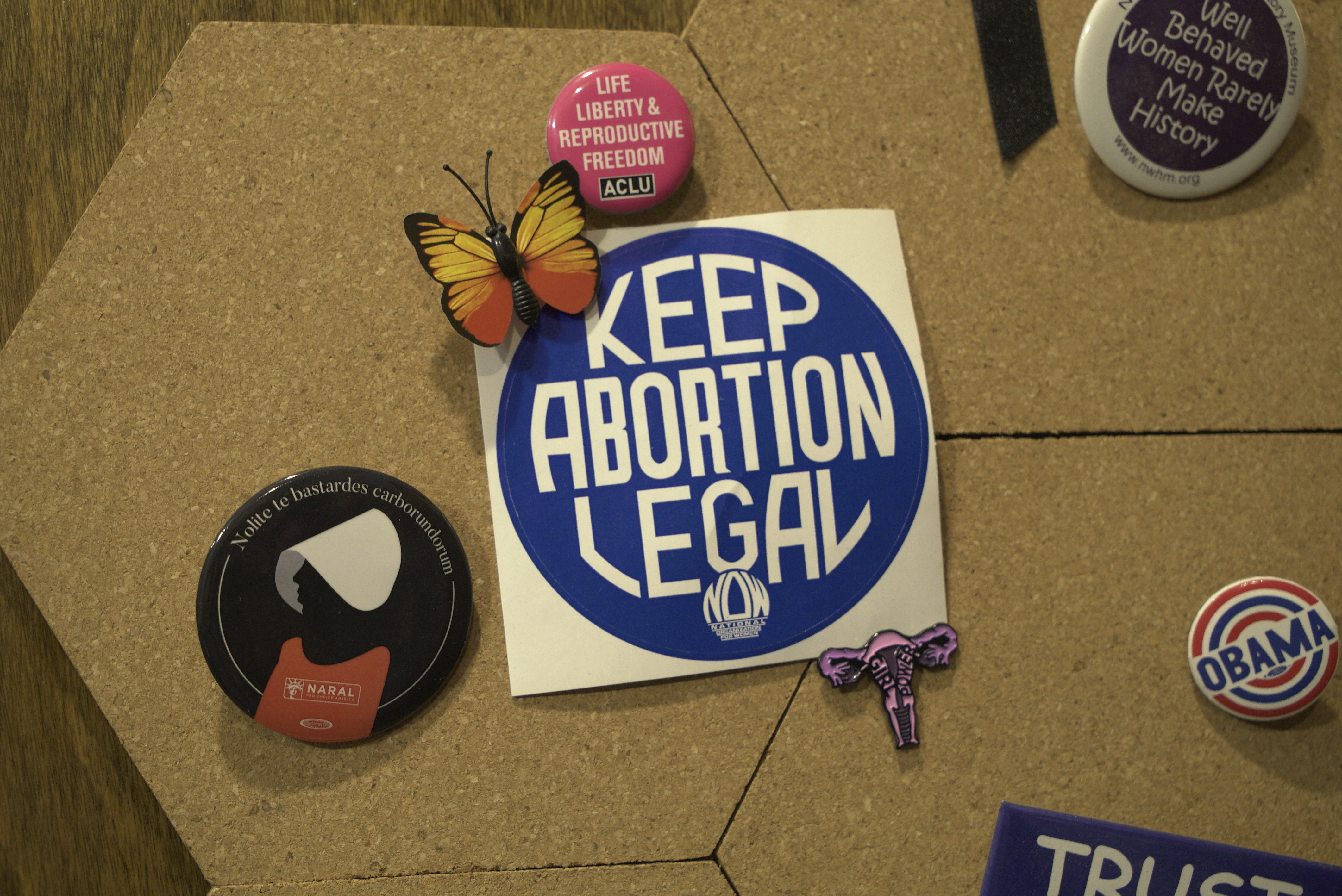 A button evoking "The Handmaid's Tale," a novel about repression of women in a United States that has become a Christian theocracy, hangs on a cork board at the West Alabama Women's Center in Tuscaloosa, Ala., on Tuesday, March 15, 2022. (AP Photo/Allen G. Breed)

Print Headline: ‘Inherent in Christianity is free will’: Religious backers of abortion rights say God’s on their side