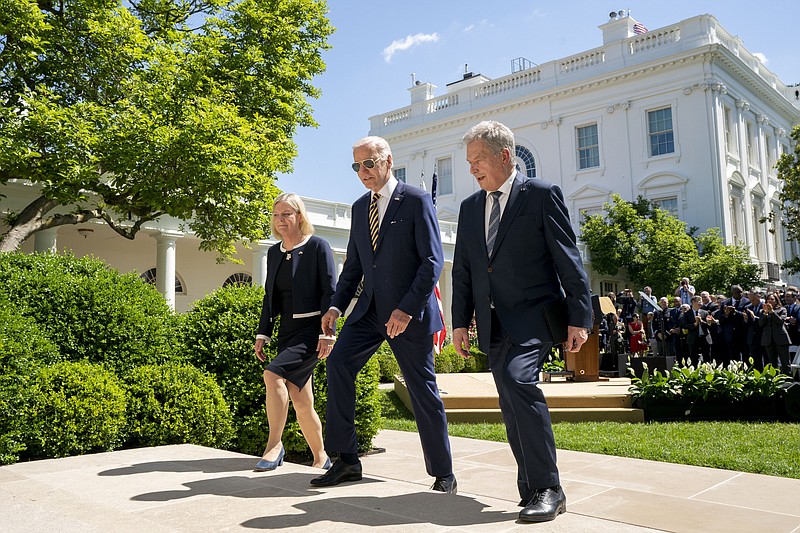 WASHINGTON -- Flanked by the leaders of Finland and Sweden, President Joe Biden forcefully supported their applications to join NATO on Thursday as Russia's war in the heart of Europe challenges the continent's security. The U.S. president rejected Turkey's opposition, insisting the two countries "meet every NATO requirement and then some."

Biden walked to a White House Rose Garden appearance with his hands on the shoulders of Prime Minister Magdalena Andersson of Sweden and President Sauli Niinistö of Finland for an event designed to emphasize U.S. backing of their NATO candidacies.

The firm show of support was targeted not only at Russia, but also Turkey's President Recep Tayyip Erdogan, who earlier emphasized his opposition to the two countries joining the military alliance. Erdogan's new comments added to uncertainty about whether he is determined to derail the expansion, which needs the unanimous support of all 30 NATO members, or whether he is using the threat to gain concessions from the two nations as well as the United States.

Biden, in a notable pledge, said the U.S. and allies would "deter and confront any aggression while Finland and Sweden are in this accession process."

Once-neutral Finland and Sweden are abandoning what in Sweden's case has been 200 years of military non-alignment, driven to join NATO's mutual defense pact in the wake of Russia's invasion of Ukraine and ongoing war there.

Acceptance of the countries would bring into the alliance two well-equipped, modern militaries on Russia's doorstep. It would also serve as a powerful and lasting rebuke to Russian President Vladimir Putin about the consequences of his invasion.

The two leaders also visited the Capitol and met with House Speaker Nancy Pelosi who said she was honored to "offer the fullest support and endorsement to your request to be part of NATO, the greatest defense alliance in the history of the world. "

Separately, the Senate approved $40 billion in fresh economic and military aid for Ukraine, sending the bill to Biden for his signature.

At the White House, Prime Minister Andersson said, "Russia's full-scale aggression against a sovereign and democratic neighbor ... was a watershed moment for Sweden. And my government has come to the conclusion that the security of the Swedish people will be best protected within the NATO alliance."

Not only are Sweden and Finland fully qualified, she said, but "having two new NATO members in the high north will enhance the security of our alliance."

Even as the three leaders were gathering, however, Turkish President Erdogan was hardening his public stand against the expansion effort. He accused the two countries -- as he often does the U.S. and Western nations in general -- of being too receptive to Turkish Kurdish groups that Erdogan calls terrorists.

Erdogan's abrupt objections on that point have brought uncertainty to an application process that had been expected to win quick approval. Turkey's threatened veto is crucial because NATO acceptance of new members requires unanimity.

"We have told our relevant friends we would say 'no' to Finland and Sweden's entry into NATO, and we will continue on our path like this," Erdogan said in a video aired Thursday in Turkey.

Still, U.S. officials remain hopeful. And NATO Secretary-General Jens Stoltenberg said Thursday: "I am confident that we will come to a quick decision to welcome both Sweden and Finland to join the NATO family."

Biden said he began the private discussions that led to the two Scandinavian leaders' "momentous" decision to join NATO back in December, even as Russian forces were gathering on the border with Ukraine, ahead of Putin's Feb. 24 invasion.

The United States and its allies say that the invasion, while failing in Russia's aim of unseating Ukraine's Western-friendly government, is only strengthening the West's security alliances.

Finland's Niinistö on Thursday credited Biden's months of encouragement with playing a crucial role in the decision by his country and Sweden to team with NATO to face any future threat from Russia or others.

The Finnish leader, speaking after Biden in the Rose Garden, addressed some of his remarks directly to the Turkish president.

"As NATO allies, we will commit to Turkey's security, just as Turkey will commit to our security," Niinistö said. "We take terrorism seriously. We condemn terrorism in all its forms and we are actively engaged in combating it."

The Finnish and Swedish leaders said their governments already are in discussion with Erdogan's to try to overcome Turkey's opposition "in an open and constructive manner."

"New members joining NATO is not a threat to any nation," Biden said. "It never has been."

Erdogan has said Turkey's objection stems from grievances with Sweden's -- and to a lesser degree Finland's -- perceived support of the banned Kurdistan Workers' Party, or PKK, and an armed group in Syria that Turkey sees as an extension of the PKK. The conflict with the PKK has killed tens of thousands of people since 1984.

Turkey also accuses Sweden and Finland of harboring the followers of Fethullah Gulen, a U.S.-based Muslim cleric whom the Turkish government blames for a 2016 military coup attempt.

The objections echo longtime Turkish complaints over even more substantial U.S. support for Kurds, as well as Gulen's presence in America.

Turkey's labeling of terrorists extends to Kurdish forces serving as close allies of the United States in Syria.

Erdogan has a history of exploiting high-profile NATO events to promote Turkey's interests, particularly when it comes to Western support for the country's fight against Kurdish extremists. At a NATO summit in 2009, he refused to endorse Anders Fogh Rasmussen as new secretary-general of the 30-nation alliance, demanding that a Kurdish TV channel in the Dane's home country be shut down first.

A decade later, at a summit in London in 2019, he threatened to block NATO moves to bolster the defenses of the Baltic countries -- Estonia, Latvia and Lithuania -- after he was criticized for launching a ground attack against Kurdish fighters in northern Syria. Both times he eventually backed down.

Speculation this time is more about the purchase of U.S. fighter jets than objections to the way Finland and Sweden are dealing with Kurdish extremists. Turkey was dropped from the F-35 advanced fighter jet development program after Erdogan bought a Russian air defense system.

Since then, Turkey has been pressing the U.S. to sell it new F-16 fighters or at the very least to refurbish its existing fleet. Rejecting Finland and Sweden's candidacies this week, Erdogan said that diplomats from the two countries should not even bother coming to Turkey to discuss that issue. At the same time, he sent Foreign Minister Mevlut Cavusoglu to Washington.