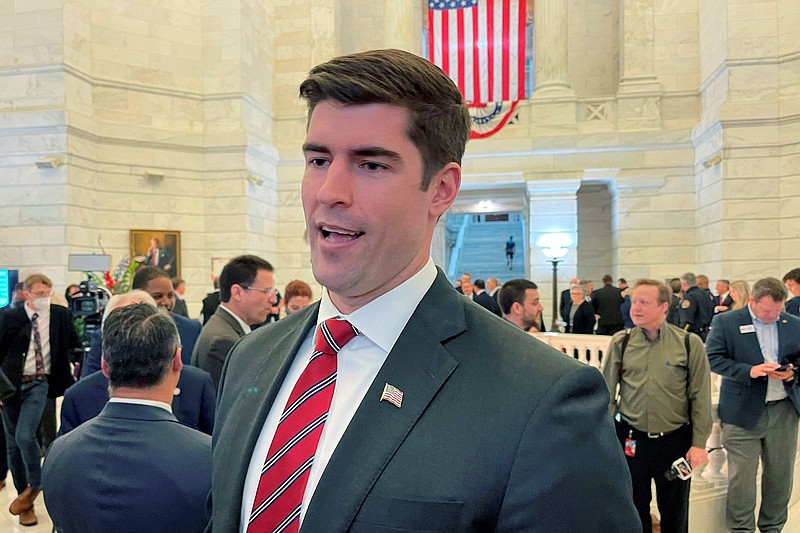 In a letter dated April 28, state Rep. Howard Beaty Jr., a Republican from Crossett, called for the U.S. Senate Select Committee on Ethics to investigate Bequette for not filing a public financial disclosure report within 30 days of becoming a candidate.

Bequette's failure to file the report within the 30-day window is a violation of the Ethics in Government Act of 1978, Beaty said in the letter.

The reports can provide insights into an individual's stock holdings, outstanding loans and non-investment income.

"Each day that Bequette fails to file his Personal Financial Disclosure (PFD) is another day Arkansans are left in the dark about the financial interests relevant to Bequette's campaign," Beaty says in the letter. "Arkansans deserve to know whether Bequette has conflicts of interest or financial entanglements relevant to his candidacy."

"By shirking his disclosure obligations under federal law, Bequette has a comparative advantage over other candidates who are more forthright about their personal finances," he argues in the letter.

Early voting is ongoing in the four-way Republican primary with the primary election set for Tuesday. Jan Morgan, a gun range owner and conservative activist, and Heath Loftis, a pastor, are also running in the race.

Bequette filed a statement of candidacy with the Federal Election Commission on July 12. Under federal law, Bequette was required to file a financial disclosure report -- or ask for an extension -- no later than August 12, Beaty wrote in the letter.

But, according to Beaty, the candidate had failed to file a report or an extension as of April 25 of this year.

Bequette's financial disclosure did not appear on a Senate website as of Friday.

"This complaint is just another desperate, baseless attack designed to distract the people of Arkansas from John Boozman's decades-long record of selling out to the radical left and the Washington establishment," a Bequette campaign official said in a statement Friday.

The statement did not address whether Bequette has filed his financial disclosure report.

Financial disclosure reports for Morgan and Loftis were also not posted on the Senate website as of Friday morning.

Loftis said he had no comment on the topic. In a statement, Morgan said "nothing at this point about Bequette surprises me." The statement did not address whether she had filed her financial disclosure report.

Beaty, in his letter, said Bequette should be "sanctioned appropriately" if he has not filed the disclosure forms within the 30-day window.

"Your office should investigate whether there is 'reason to believe' that Bequette willfully failed to file the required report, and, if so, ask the Attorney General of the United States to impose up to $50,000 in civil penalties," Beaty said in the letter.

Beaty's letter was addressed to U.S. Sen. Chris Coons, a Democrat from Delaware who serves as chairman of the Senate Select Committee on Ethics, and U.S. Sen. James Lankford, a Republican from Oklahoma who is vice chairman of the committee.

The committee did not respond to a request for comment on the status of its response to Beaty's letter.

During the primary campaign, Bequette has been a fierce critic of the incumbent. Bequette has called Boozman a RINO, an acronym meaning Republican In Name Only, and said the two-term senator only sides with former President Donald Trump when he can benefit.

"He's pretending to be a Trump supporter. And the more that the people of Arkansas are hearing about his record and learning about me, they know that I'm the America-first candidate in this race," Bequette said. "And I think that's why we're gonna force this runoff and win the runoff."

It's not the first time filing issues have been brought up in a U.S. Senate race.

The departure came after Mahony was accused by the Republican Party of Arkansas of misrepresenting his employment status on Federal Election Commission filings.

Additionally, Mahony, once in the race, missed deadlines for filing financial-disclosure paperwork. The document, once submitted, was flawed; Mahony refiled it five times over the space of 38 days after errors and omissions had been spotted.

Information for this article was contributed by Frank E. Lockwood of the Arkansas Democrat-Gazette.