‘It could have been different’: Texarkana mom describes horror of teen son’s shooting 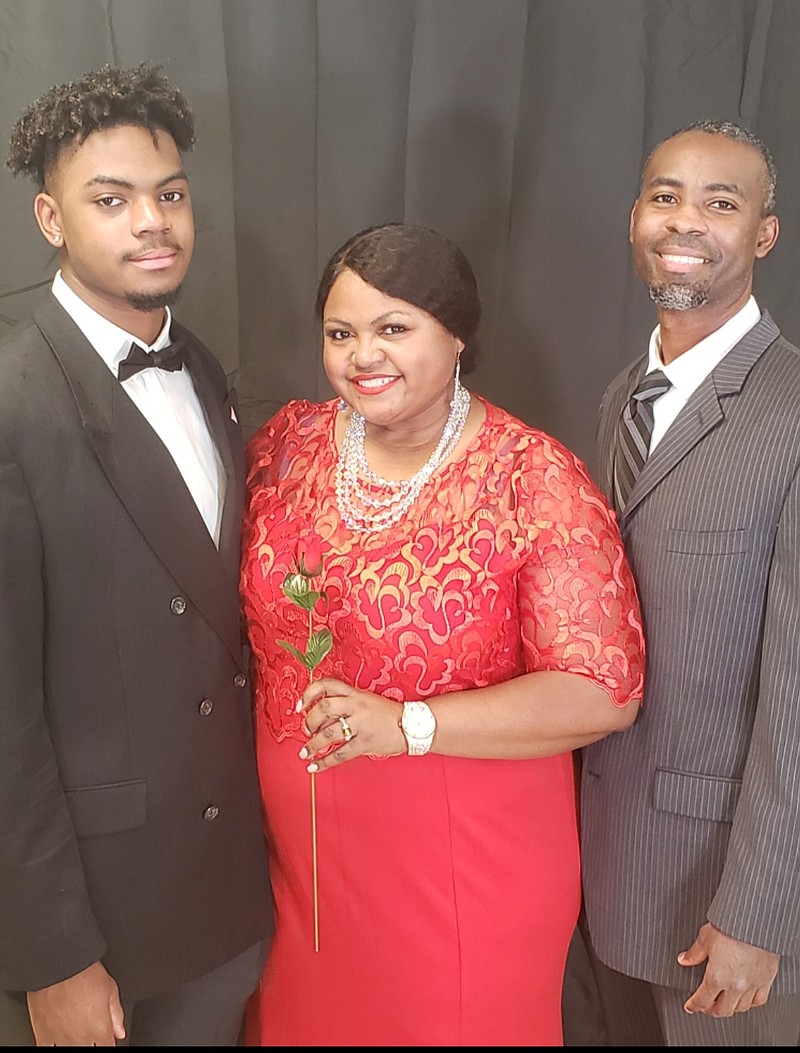 Braxton White takes a photo on prom night, Saturday, May 14, 2022, with his parents Shayla Washington White and Cedell White. Braxton, who will graduate Saturday, May 28, 2022, from Texas High School, was shot in the leg while leaving an after-prom party. No one has been arrested in the shooting. (Submitted photo)

TEXARKANA -- Shayla Washington White is so angry she is shaking. But she is also thankful son Braxton is home resting, right down the hall in his bedroom.

"I say thank you, Jesus, that he is home, because it could have been different," White said. "He is here. He is walking around, slowly but surely, but he's in pain. What could have happened didn't happen," she said.

Braxton White, an 18-year-old senior at Texas High School, was shot shortly after 1 a.m. Sunday, May 15 while walking back to his car from an after-prom party that he only attended for a few minutes.

It's been a frantic, stressful week for the family.

"Nobody can understand unless they have a child that is a victim to gun violence. It's just an unexplainable feeling," White said.

As of late Friday, no arrest had not been made in Braxton's shooting outside an Airbnb in the 2400 block of Brookridge Drive near Jefferson and Pinson in Texarkana, Arkansas. The shooting remains under investigation by Texarkana Arkansas Police Department.

About an hour before Braxton was shot, a female juvenile was shot in the 4300 block of North State Line Avenue. The girl was found sitting injured in the front passenger seat of a car when police arrived.

Wallace Stewart, 18, is charged with second-degree battery and tampering with physical evidence in the girl's shooting, according to TAPD.

White said Braxton, whom his friends call B, typically does not go to parties but decided to go to this one because it was prom night.

"It was a prom party but only supposed to be a few kids. He took his date home, changed clothes and went to the party. They were supposed to be playing Xbox and having pizza," White said. "He said he wouldn't stay long. I told him to call me as soon as he got there and he did. He was standing outside the door of the house and said he might come home because there were too many people there," she said.

He texted her a few minutes later to say the party was thinning out and he might stay a little longer. But White was ready for her son to be home.

"The whole night I didn't feel right," she said.

"As he's walking and texting me, that's when he was shot," she said.

"He said when he was hit, that it felt like a sting, like a charley horse times ten. He fell and crawled to his car," White said.

And she's grateful her son stayed on the ground, because reportedly bullets kept flying.

Braxton had the presence of mind to put pressure on his wounds and drove home, about 2 to 3 miles away.

"I woke up my husband, and we took him straight to St. Michael's," White said.

Seeing her son bleeding in the emergency room while having to answer questions about the shooting was hard for White to watch.

"They thought at first he might have been involved in the gunfire," she said. "He is not that person," she said.

Braxton is a good student; a prayer captain for the football team, on which he was a defensive lineman; and a peer coach at Spring Lake Park Elementary. He has received numerous college offers and plans to attend Missouri Western State University in the fall.

"My phone has been ringing nonstop from people who have known him through the years. They are calling to check on him."

The family got home from the hospital about 7 a.m. Sunday.

Braxton's high school graduation is scheduled for Saturday, May 28.

White never thought her son would be recovering from a gunshot wound at his own graduation.

She is outraged by the amount of gun violence locally. And the types of guns that many people have.

"This has got to stop. There is a lot of crime everywhere ... a lot of crime. Kids have guns and don't know how to use them," she said.

"Kid should be able to go to parties if they want to. People should be able to buy a bag of ice without being shot," she said in reference to a recent shooting in Texarkana Texas where a man was struck by a stray bullet and seriously injured.

She also thinks parents need to keep a close eye on what their teens are doing.

White recently did a Facebook live asking for information about the shooting. Any information she receives, she sends on to detectives.

"Call me, call the police. I need anybody with information to call. This mama don't play, and I won't stop until justice is served," she said. 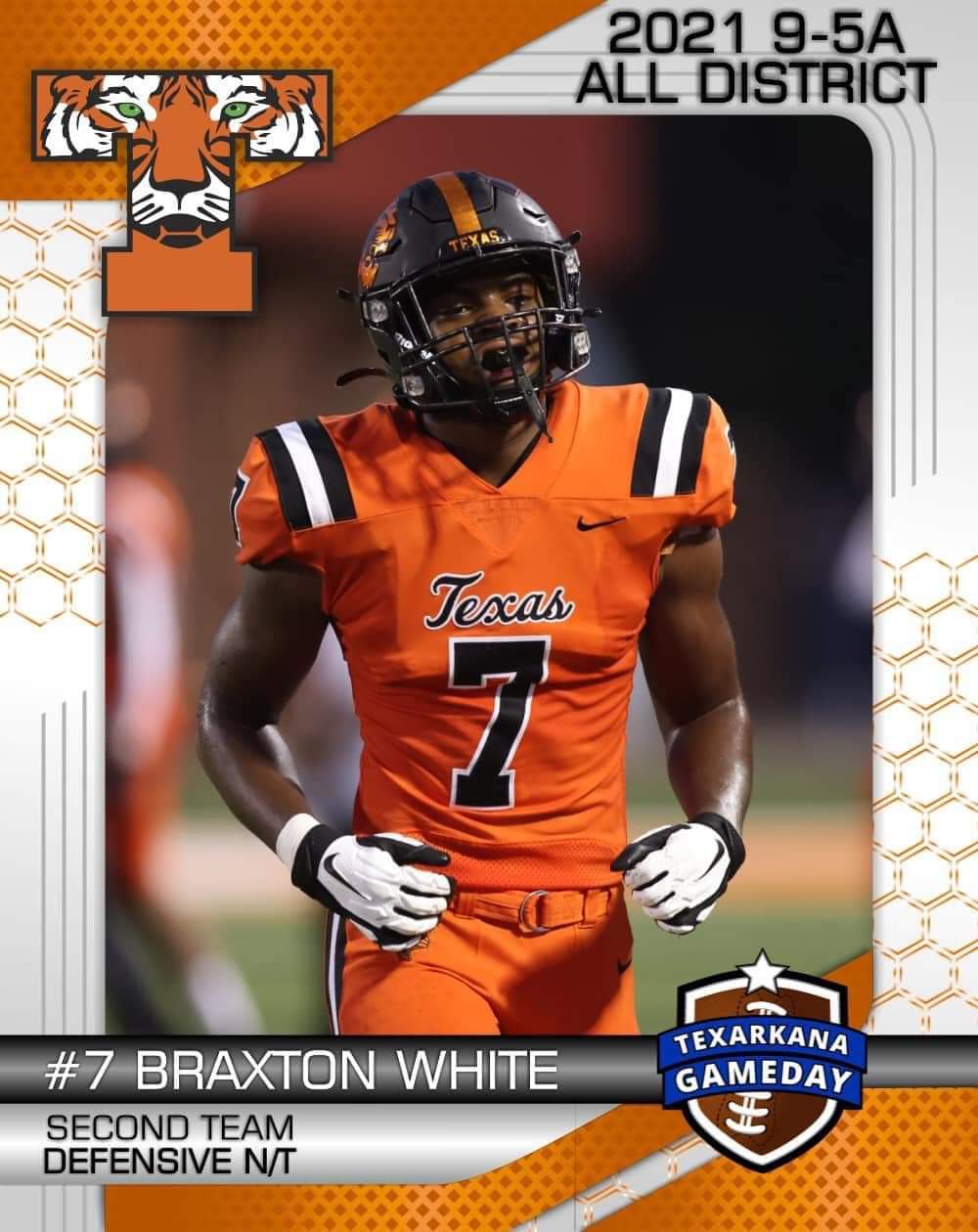 Braxton White is seen in uniform for the Texas High Tigers. The 18-year-old was a defensive lineman. (Submitted photo)

Print Headline: ‘It could have been different’: Texarkana mom describes horror of teen son’s shooting