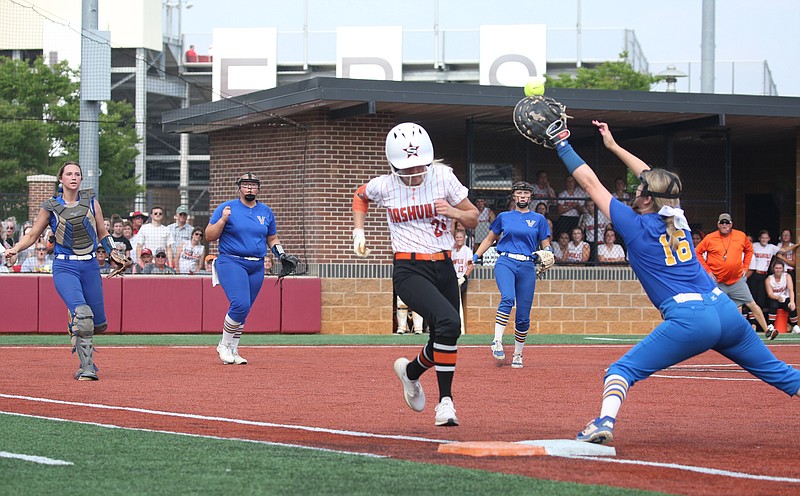 Ashley Chambers, center, runs to first base for Nashville during the Arkansas State 4A Girls Softball Championship Game against Valley View in Benton on Friday, May 20, 2022. Valley View would go on to win the championship game. (Arkansas Democrat-Gazette/Colin Murphey)

BENTON – It's a good thing Valley View didn't pack things up after the way it began Friday's Class 4A softball final.

Doing so would've denied the team and its fans a chance to witness something that's never been done in program history.

Riley Smith was nearly untouchable on the mound, and the Lady Blazers collected enough well-timed hits to hold off Nashville 2-1 at the Benton Athletic Complex and claim their first state championship.

"I told the girls before the game started that if they wanted to make it to the Promised Land, they had to step into the Jordan River, and God would part it," said an emotional Valley View Coach B.J. Zipfel. "And that's what happened. God gets all the glory, they get all the credit. I'm just super proud."

Zipfel's happiness was all over his face after his Lady Blazers responded to a shaky first inning by coming up big in clutch moments.

Valley View (24-5) trailed 1-0 after that opening inning but scored in both the second and third inning to take a one-run lead. That slim separation was all the Lady Blazers would need, and Smith made sure of it.

The sophomore held a potent Nashville offense in check by allowing just two hits. She had only three strikeouts, but she also never allowed the Scrapperettes to get comfortable offensively.

Smith, who earned Most Valuable Player honors after completing her masterpiece on 86 pitches, sat down 19 of the final 20 hitters on a Nashville team that lit up Morrilton and Stuttgart for a combined 27 hits and 26 runs during run-rule victories in the quarterfinals and semifinals.

"We were just hitting it right to people," Nashville Coach Boomer Brown explained. "All the credit to Valley View, though, because [Smith] battled on the rubber. She's a good player and was deserving of the MVP. But our sticks just went blank there for a while."

Nashville (27-5) also got a notable performance from its standout pitcher, Maci Junkins. The senior yielded 7 hits, struck out 7 and walked 1 on 99 pitches while throwing a complete game. But the runs were hard to come back in their first trip to the championship game since 2017.

The Scrapperettes did jump out on the Lady Blazers quickly. Nashville's Ashley Chambers singled to lead off the bottom of the first and would later steal second. She would go on to score off an error to put her team ahead 1-0.

But Valley View matched the Scrapperettes in the following inning. Sophie Newberry hit a two-out double down the left-field line before Grace Butler, who finished with a team-leading two hits, sent a ball into left-center for an RBI single to tie the game at 1-1.

The Lady Blazers surged out front in the third, thanks to another pair of back-breaking, two-out hits. Lexi Davis turned on a 2-2 pitch and cracked it into right field for a triple. Adrianna Winkfield then smacked a run-scoring single to give Valley View the lead for good.

Smith made that lead stand. McJunkins had the only other hit for the Scrapperettes – a single – in the fourth, but she never got past first base. The Lady Blazers star would notch the final six outs of the game on just 14 pitches.

"Today we made plays behind [Smith]," Zipfel said. "After that first inning, she just got back to what she does. None of what happened was any of her doing. Instead of her worrying about it and saying 'I'm gonna do extra', she just settled down and said 'I'm gonna do my part and my teammates have got my back'. And they did."