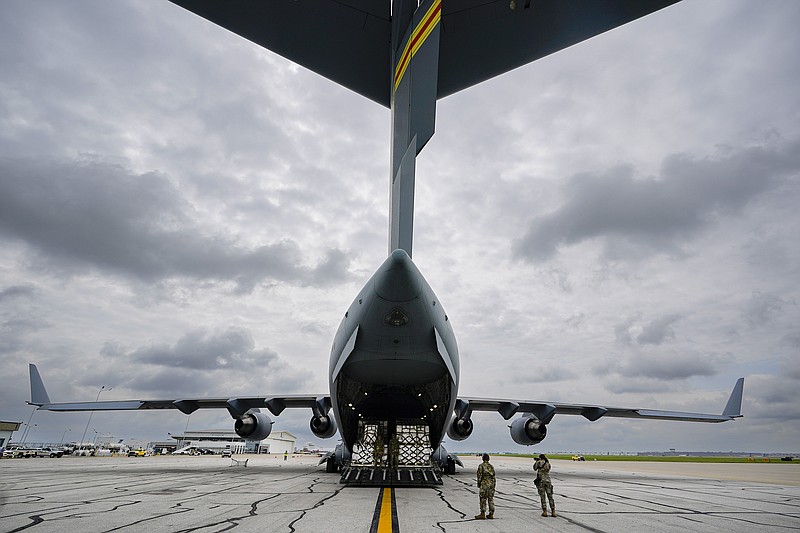 The crew of an Air Force C-17 begins to unload a plane load of baby formula at the Indianapolis International Airport in Indianapolis, Sunday, May 22, 2022. The 132 pallets of Nestlé Health Science Alfamino Infant and Alfamino Junior formula arrived from Ramstein Air Base in Germany (AP Photo/Michael Conroy)

TEXARKANA -- Trucks are delivering baby formula to Target daily, but it has not been enough to meet the demand.

"We are getting some in on the trucks every day, but it's not much, and typically by afternoon it's sold out," said Lisa McGaugh, store manager.

"What we are mainly hearing from parents is them asking if we have any more. They ask if we have more in the back, but we are putting it on the shelves as fast as we can," McGaugh said.

The distribution center for the Texarkana Target is in Tyler, Texas, McGaugh said.

Supplies of baby formula across the country have been severely curtailed in recent weeks after a February recall by Abbott Nutrition exacerbated ongoing supply chain disruptions among formula makers, leaving fewer options on store shelves and increasingly anxious parents struggling to find nutrition for their children.

A military plane carrying enough specialty infant formula for more than half a million baby bottles arrived Sunday in Indianapolis, the first of several flights expected from Europe aimed at relieving a shortage that has sent parents scrambling.

President Joe Biden authorized the use of Air Force planes for the effort, dubbed Operation Fly Formula, because no commercial flights were available.

Most local grocery stores have been affected by the shortage.

All baby formula retailers in Texas have been struggling to source baby formula for the past several months, said Gary Huddleston, grocery industry consultant for the Texas Retailers Association.

Texas baby formula retailers like Albertson's, Walmart, Target, Walgreens, CVS and others that operate in Texarkana are optimistic baby formula products from this plant will begin shipping soon, Huddleston said. Also, the other major baby formula manufacturers such as Nestle and Mead-Johnson have increased production, as well as importing product from foreign plants, he said.

However, due to the supply chain issues with baby formula, most Texas retailers have placed limits on the number of cans a customer can purchase.

"These limits are different at retailers but range from a limit of three cans to six cans," Huddleston said.

U.S. regulators and Abbott Nutrition hope to have the Michigan plant reopened next week, but it will take about two months before product is ready for delivery. The company must overhaul its safety protocols and procedures before resuming production.

Texarkana's hospitals have so far not been directly affected by the formula shortage.

"In terms of formula shortages, this is most affecting consumer purchasing, parents and caregivers trying to find formula at grocery stores and online. The hospital supply chain of formula has not been directly affected by the shortage and as such, we have not had to turn to breast milk banking for surplus formula stocking," said Dr. Loren K. Robinson, chief medical officer and vice president medical affairs for CHRISTUS St. Michael.

Wadley Hospital has not had a shortage yet, either.

"Right now we are not having any problems. Not to say we won't in the future," said Shelby Brown, director of marketing for Wadley.