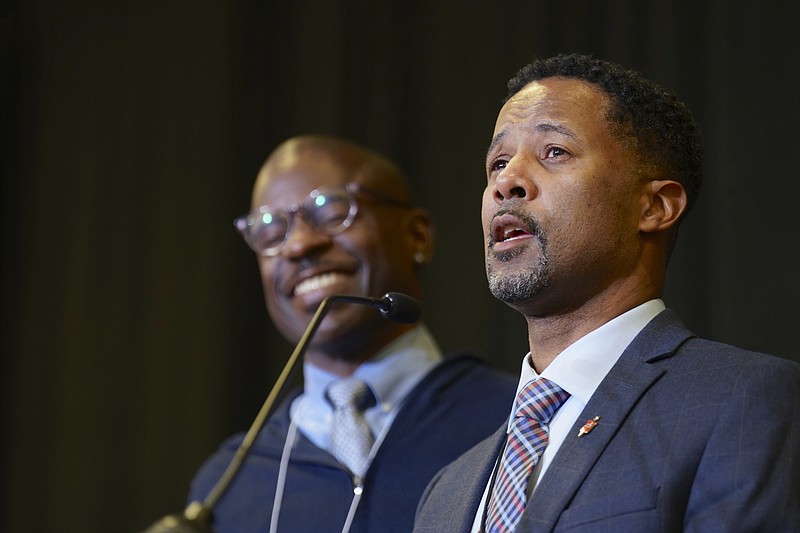 The United Methodist Church moved toward becoming more progressive and LGBTQ-affirming during U.S. regional meetings this month that included the election of its second openly gay bishop. Conservatives say the developments will only accelerate their exit from one of the nation's largest Protestant denominations.

Each of the UMC's five U.S. jurisdictions -- meeting separately in early November -- approved similarly worded measures aspiring to a future of church where "LGBTQIA+ people will be protected, affirmed, and empowered."

They also passed non-binding measures asking anyone to withdraw from leadership roles if they're planning to leave the denomination soon -- a category that almost entirely includes conservatives moving toward the exits.

The denomination still officially bans same-sex marriage and the ordination of any "self-avowed, practicing homosexual," and only a legislative gathering called the General Conference can change that.

But this month's votes show growing momentum -- at least in the American half of the global church -- to defy these policies and seek to reverse them at the next legislative gathering in 2024.

Supporters and opponents of these measures drew from the same metaphor to say their church is either becoming more or less of a "big tent," as the United Methodists have long been described as a theologically diverse, mainstream denomination.

"It demonstrates that the big tent has collapsed," said the Rev. Jay Therrell, president of the conservative Wesleyan Covenant Association, which has been helping churches that want to leave the denomination.

"For years, bishops have told traditionalists that there is room for everyone in the United Methodist Church," he said. "Not one single traditionalist bishop was elected. Moreover, we now have the most progressive or liberal council of bishops in the history of Methodism, period."

But Jan Lawrence, executive director of Reconciling Ministries Network, which works toward inclusion of Methodists of all sexual orientations and gender identities, applauded the regional jurisdictions. She cited their LGBTQ-affirming votes and their expansion of the racial, ethnic and gender diversity of bishops.

"It is a big tent church," Lawrence said. "One of the concerns that some folks expressed is that we don't have leadership in the church that reflects the diversity of the church. So this episcopal election doesn't fix that, but it's a step in the right direction."

The LGBTQ-affirming resolutions point "to the alignment of the denomination more with the mainstream of our country," Bridgeforth said. "It can also help us begin to center our conversations where we have unity of purpose, rather than centering on divisions."

Bridgeforth will lead churches in the Greater Northwest Area, which includes churches in Alaska, Idaho, Oregon, Washington, and small parts of Montana and Canada. He said he has always worked across ideological lines in his administrative duties and would continue to do so.

"I have used our differences as an opportunity for us to come together," he said. "It creates more space for a different kind of conversation than, 'That's different, that's bad, we can't be together.'" If some churches under his jurisdiction do choose to leave the United Methodist Church, Bridgeforth said he would help them make that transition.

"I would not want anybody to be where they don't want to be," he said.

Progressive groups have said the church should be open to appointing bishops and other clergy, regardless of sexual orientation, who show they have the gifts for ministry and a commitment to serve the church.

Conservatives, however, say the church needs to abide by its own rules.

"I am sure Bishop Bridgeforth is a person of sacred worth, but he does not meet the qualifications to hold the office of elder, much less bishop, and should not have been elected," Therrell said.

At least 300 U.S. congregations have left the denomination this year, according to United Methodist News Service. Hundreds more are in the process of leaving, and Therrell predicted that number would be in the low thousands by the end of 2023. Overseas conferences in Bulgaria and Slovakia have ended their affiliation with the denomination, and churches in Africa are considering it, he said.

Many are bound for the newly formed conservative denomination, the Global Methodist Church.

The UMC is a worldwide denomination. American membership has declined to about 6.5 million, from a peak of 11 million in the 1960s. Overseas membership soared to match or exceed that of the U.S., fueled mostly by growth and mergers in Africa. Overseas delegates have historically allied with American conservatives to uphold the church's stances on sexuality.

Support for a compromise measure that would have amicably split the denomination, negotiated in 2020, fell apart after that year's legislative General Conference was postponed three times due to the pandemic. The next General Conference is now scheduled to begin in April 2024 in Charlotte, North Carolina.

A vote by a 2019 General Conference was the latest of several in recent decades that reinforced the church's ban on gay clergy and marriage. But that vote also prompted many local conferences to elect more liberal and centrist delegates, whose influence was felt in this month's regional votes. 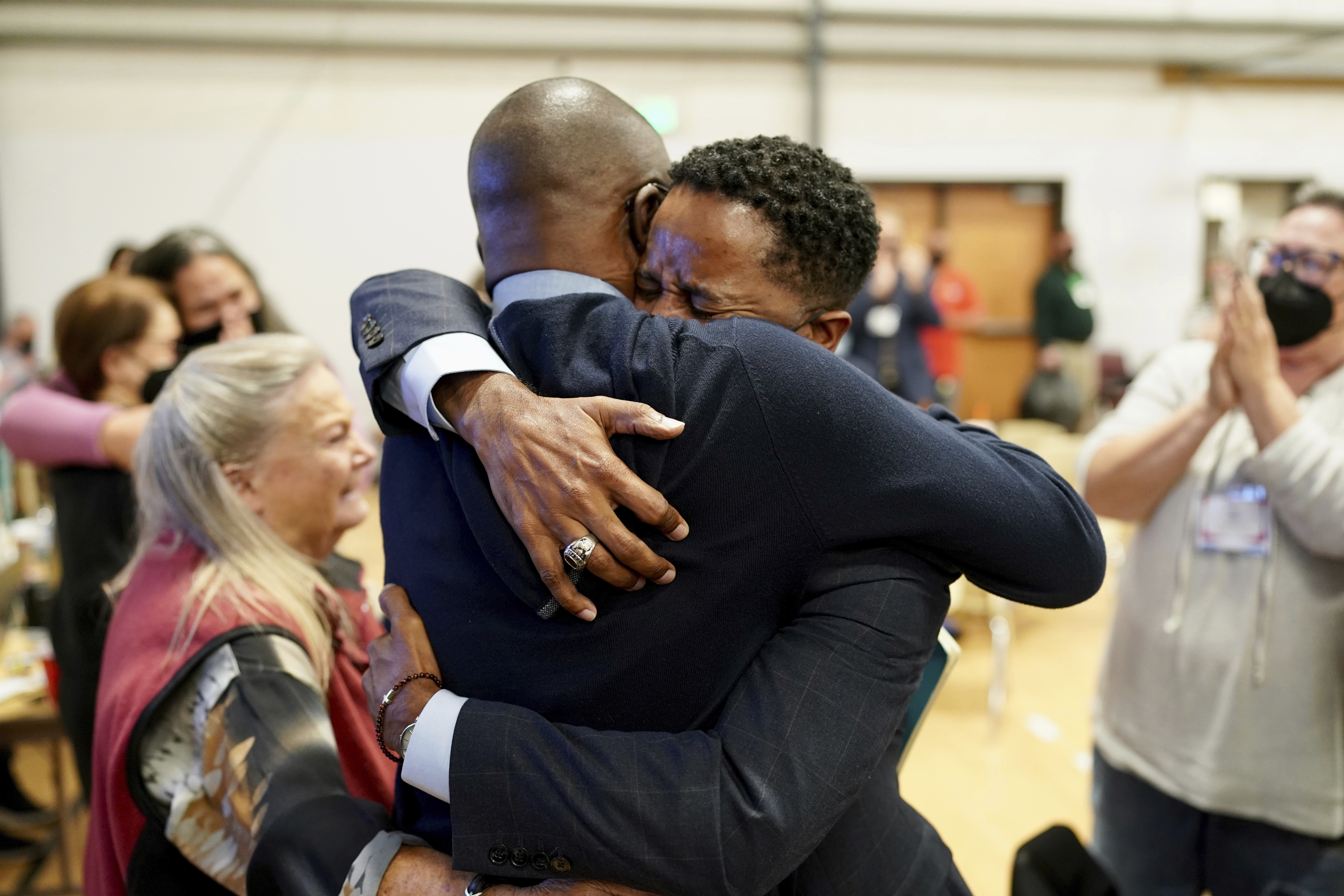 Bishop Cedrick Bridgeforth, a United Methodist elder in the California-Pacific Conference, embraces his husband, Christopher Hucks-Ortiz, after his election was announced on Nov. 4, 2022, at Christ United Methodist Church in Salt Lake City. Bridgeforth, who will lead churches in the Greater Northwest Area, said he has always worked across ideological lines in his work in church administration and would continue to do so. (Patrick Scriven/United Methodist News via AP) 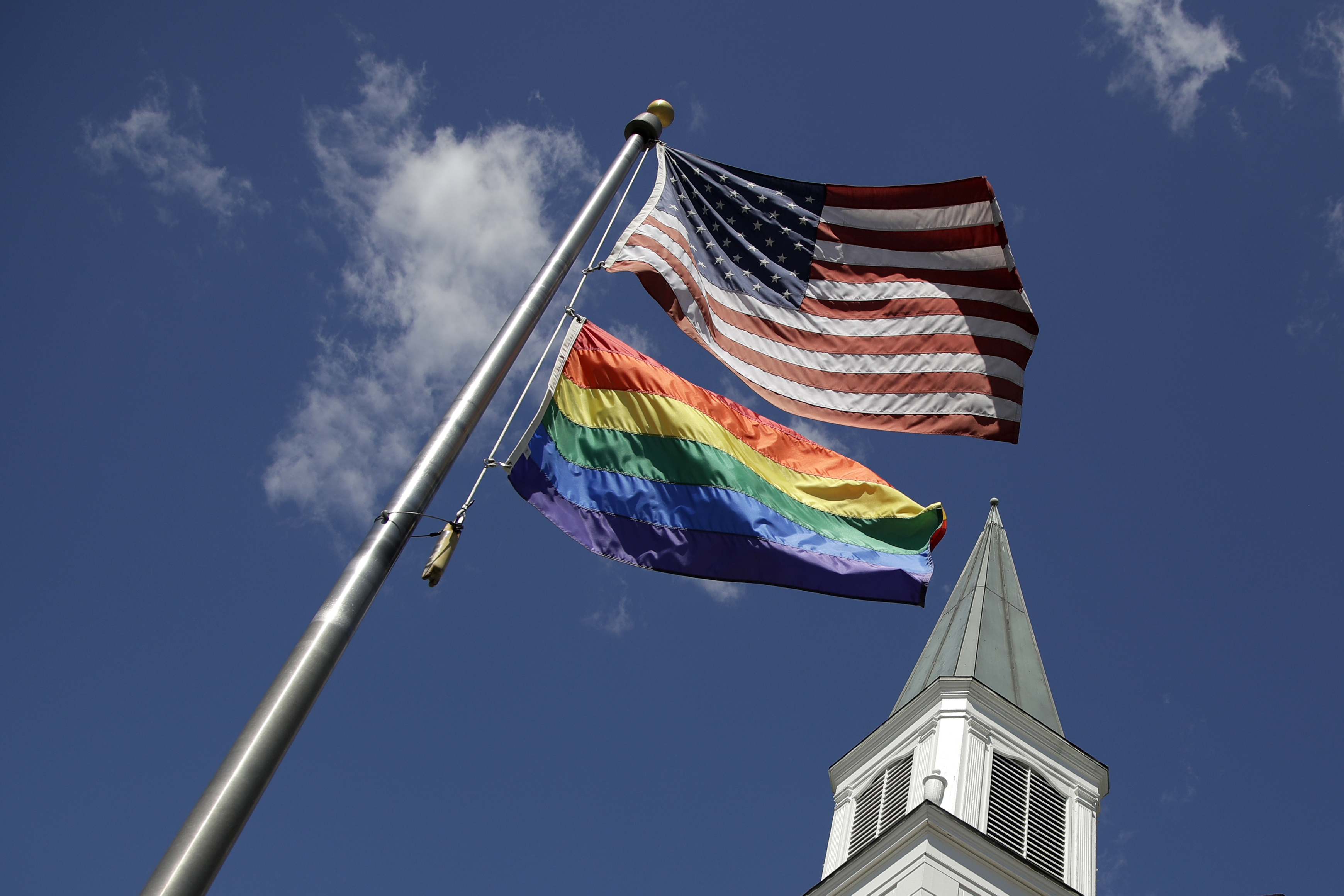 FILE - A gay pride rainbow flag flies with the U.S. flag in front of the Asbury United Methodist Church in Prairie Village, Kan., on Friday, April 19, 2019. The United Methodist Church moved toward becoming more progressive and LGBTQ-affirming during U.S. regional meetings in November 2022, that included the election of its second openly gay bishop. Conservatives say the developments will only accelerate their exit from one of the nation’s largest Protestant denominations. (AP Photo/Charlie Riedel, File)