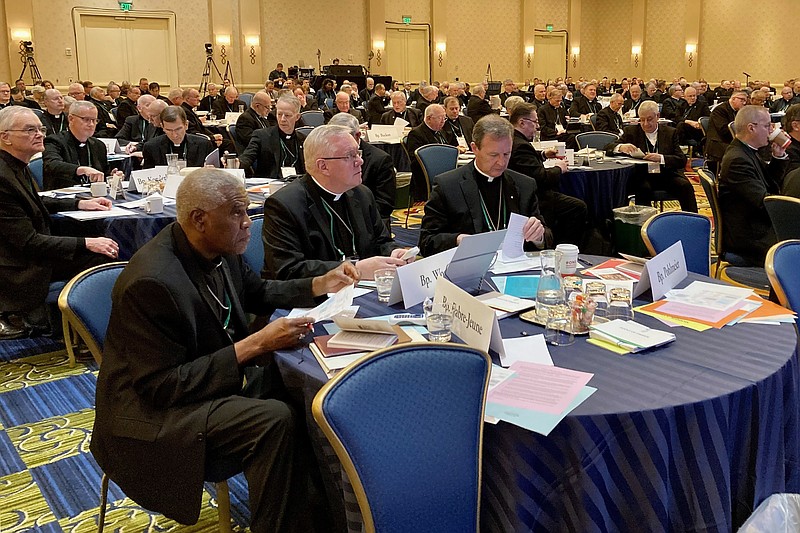 The U.S. Conference of Catholic Bishops gathers for its fall meeting in Baltimore on Wednesday, Nov. 16, 2022. (AP Photo/Peter Smith)

BALTIMORE -- Even as they signaled a continued hardline stance on opposing abortion and same-sex marriage, the nation's Catholic bishops acknowledged Wednesday that they're struggling to reach a key audience: their own flock.

The members of the U.S. Conference of Catholic Bishops rounded out their leadership bench during the last day of public sessions of their fall annual meeting in Baltimore, which concludes with private meetings Thursday.

They also set in motion a plan to recirculate their long-standing election document in 2024 -- a 15-year-old statement that prioritizes opposition to abortion -- while acknowledging it's outdated and adding a cover statement addressing such things as the teachings of Pope Francis and the Supreme Court's Dobbs ruling in June that overturned the nationwide right to abortion.

The bishops elected Oklahoma City Archbishop Paul Coakley as secretary in a 130-104 vote over Cardinal Joseph Tobin of Newark, New Jersey, who had been named a cardinal by Pope Francis. It's the second time in five years that the bishops have passed over a Francis-appointed cardinal for a key leadership post.

Earlier this year, Coakley had applauded the decision by San Francisco's archbishop to deny Communion to House Speaker Nancy Pelosi, a Catholic Democrat from that city who supports abortion rights. So had the bishops' new point man on opposition to abortion -- Bishop Michael Burbidge of Arlington, Virginia, elected Wednesday as chairman of its Committee on Pro-Life Activities.

The votes came a day after the bishops elected as their new president Archbishop Timothy Broglio of the Archdiocese for the Military Services. Broglio is also seen as more of a culture warrior than Pope Francis, though Broglio has dismissed the idea of any "dissonance" between the two.

At the same time, Coakley cited the importance of Francis' priorities in a news conference Wednesday.

Coakley is leading the bishops' review of, "Forming Consciences for Faithful Citizenship," a document they have used in election years with only minor revisions since 2007.

While a full revision will take years, bishops approved Coakley's recommendation to begin drafting a new introduction to issue with the document in time for 2024's election. It would incorporate recent events such as the Ukraine war and the Dobbs decision.

Coakley said the new introduction needs to reflect Pope Francis' priorities, such as promoting civil discourse and protecting the environment.

"It's a rich pontificate that offers us plenty to lay out for people ... to embrace the vision that Pope Francis has articulated," Coakley said.

Bishops from both the progressive and conservative flanks of the church echoed concern that Catholics aren't reading the document.

Bishop John Stowe of Lexington, Kentucky, a Francis appointee, said that bishops need a statement that's relevant amid the shaken confidence in democracy following the U.S. Capitol riot and in the wake of Dobbs and defeats for abortion opponents in votes on five state ballot measures. "It's irresponsible to issue an old teaching and suggest the church has nothing new to say when so much of this context has changed," he said.

Bishop Joseph Strickland of Tyler, Texas, one of the most outspoken conservative bishops, lamented the recent state ballot measures. Polls show Catholics to be mixed on legal abortion.

"I think it's a solid document," Strickland said, but "I think we have to acknowledge people aren't listening."

The gap between Francis and the U.S. bishops reflects in part the conference's continued emphasis on culture-war battles over abortion and same-sex marriage.

Francis, while also opposing both in keeping with church teaching, has used his papacy to emphasize a wider agenda of bringing mercy to those at the margins, such as migrants and other poor. The Vatican said in 2021 the church cannot bless gay unions because God "cannot bless sin," but Francis has made outreach to the church's LGBTQ members a hallmark of his papacy. As recently as last Friday, Francis met with the Rev. James Martin, an American Jesuit priest whom the pontiff has supported in his calls for dialogue with LGBTQ Catholics.

Both Pelosi and President Joe Biden, another Catholic who favors legalized abortion, have received Communion since 2021 in churches in Rome, the pope's own diocese.

The bishops also heard an impassioned talk Wednesday by Archbishop Borys Gudziak of the Ukrainian Archeparchy of Philadelphia on behalf of war-torn Ukraine.

At the same time, he said that on a conference call with staff at a Catholic university in Lviv, he heard only joy and resolve even amid losses of electrical power in Russia's missile barrage Tuesday. One staff member told him, "Better without electricity and with Kherson," he said, alluding to the recently liberated city.

Gudziak accused Russia of a "genocide" through such attacks and through its denial of Ukrainians' identity as a separate people.

Also Wednesday, a small group of survivors of sexual abuse and their supporters held a sidewalk news conference outside Baltimore Marriott Waterfront, where the bishops are meeting. While this year marks the 20th anniversary of the bishops' landmark policy barring all abusers from ministry, advocates are seeking more transparency.

They called for bishops in every diocese to post detailed lists of credibly accused abusers and to stop lobbying against state legislation that would extend statutes of limitations for abuse lawsuits.

David Lorenz, Maryland director of the Survivors Network of those Abused by Priests, cited Archbishop Broglio's archdiocese as one of the few that still does not publish even a minimal list of abusers. Broglio declined to comment.

"I don't need another apology because it doesn't do anything to protect kids," Lorenz added. "I want action to help kids. I want them (bishops) to be totally, absolutely transparent."

They include Michelle Duppong of North Dakota, a campus missionary who died of cancer in 2014 and is credited with showing faithfulness in suffering.

They also include two 20th century women: Cora Evans, a Catholic convert from Utah who reported mystical experiences from an early age; and Mother Margaret Mary Healy Murphy of Texas, founder of a religious order, who provided education and other ministry to African Americans. 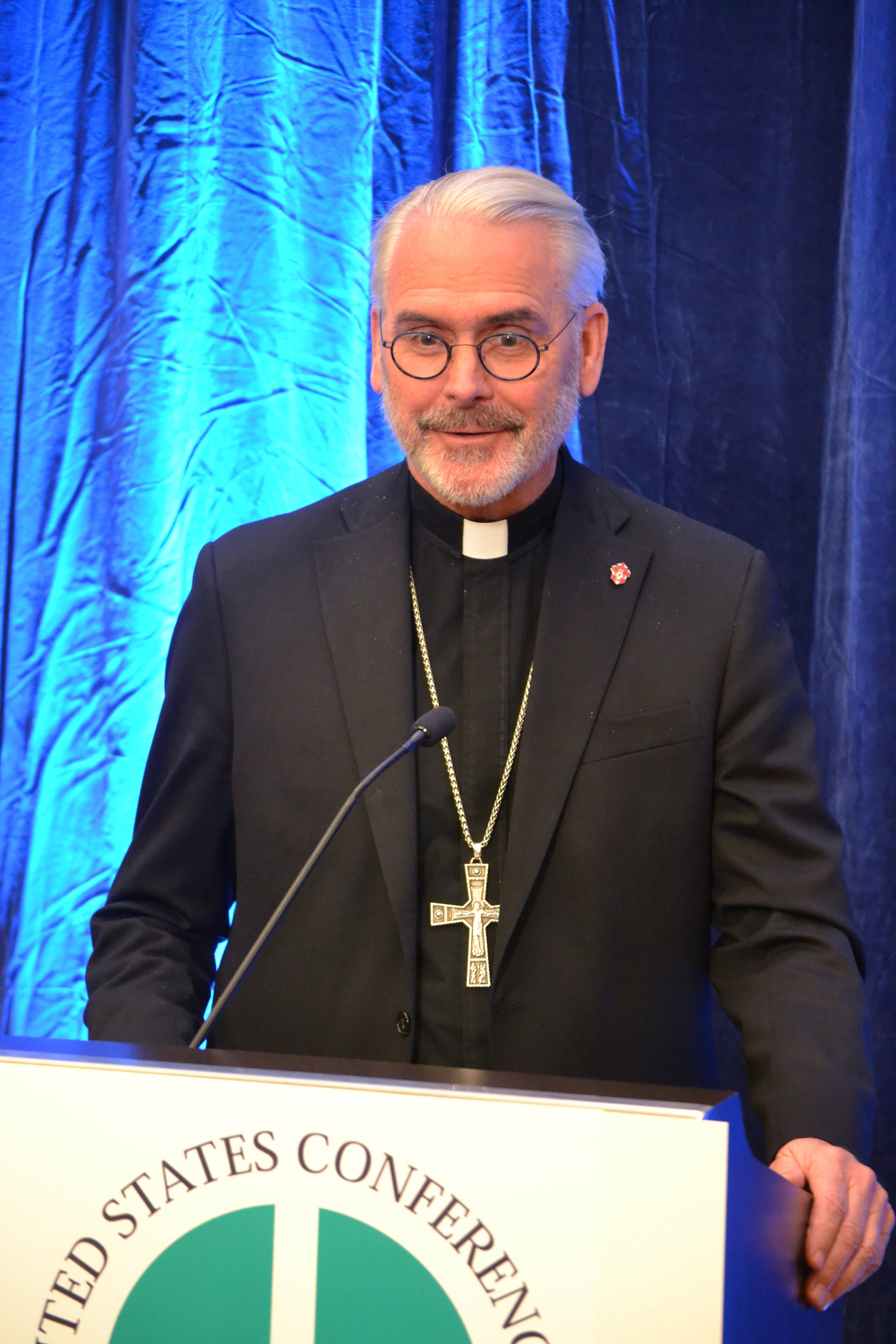 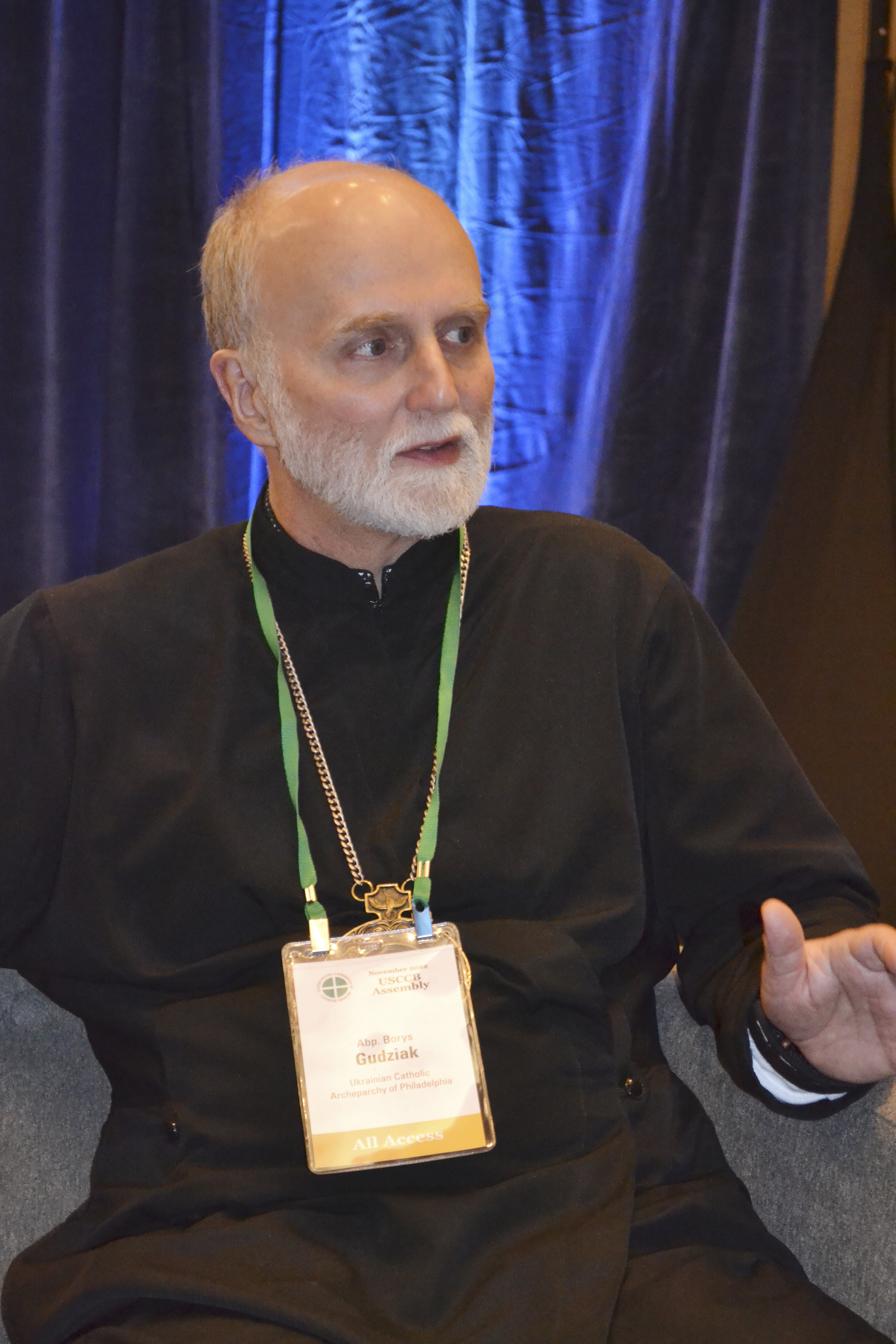 Archbishop Borys Gudziak of the Ukrainian Archeparchy of Philadelphia speaks about the Catholic response to the war in Ukraine at a U.S. Conference of Catholic Bishops’ news conference in Baltimore on Wednesday, Nov. 16, 2022. (AP Photo/Peter Smith) 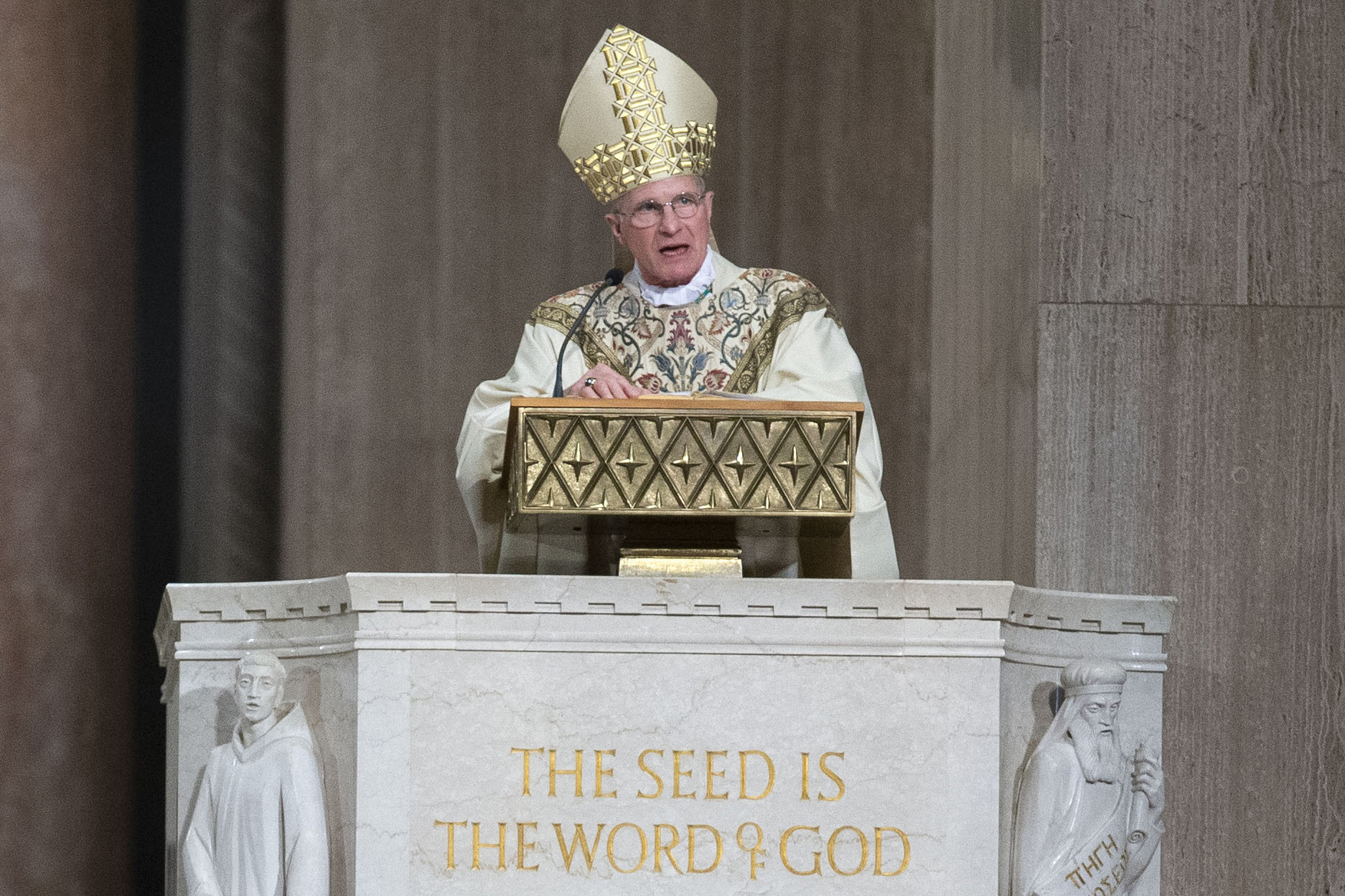 FILE - Archbishop Timothy Broglio conducts an Easter Sunday Mass at Basilica of the National Shrine of the Immaculate Conception in Washington, Sunday, April 12, 2020. Broglio of the Military Services, who oversees Catholic ministries to the U.S. armed forces, was elected Tuesday, Nov. 15, 2022, as the new president of the U.S. Conference of Catholic Bishops. (AP Photo/Jose Luis Magana)