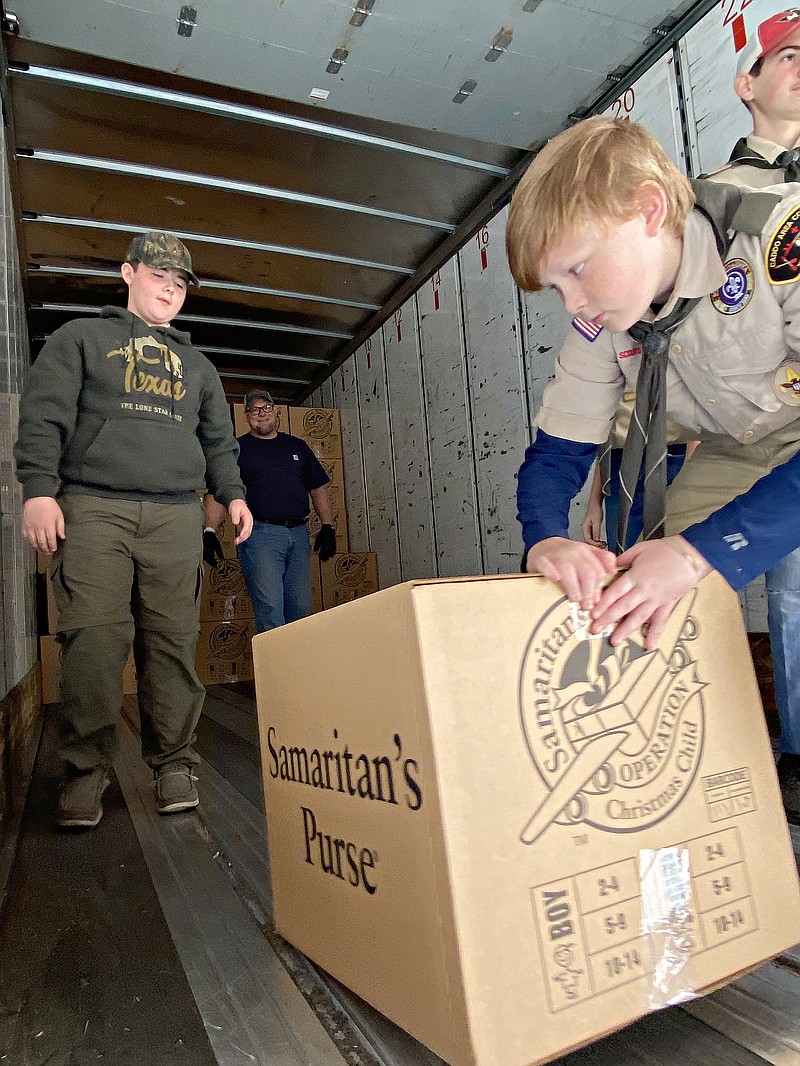 Boy Scout Brendan Morton loads a crate filled with shoeboxes for Operation Christmas Child as fellow Scout Keigan Owens, left, prepares to move the box to the back of a semi-trailer Monday afternoon, Nov. 21, 2022, at Cross View Baptist Church in Texarkana, Texas. The Scouts are with Troop 30 in Redwater, Texas. In all, the Texarkana area collected 35,000 shoeboxes during National Collection Week. (Staff photo by Stevon Gamble)

TEXARKANA, Texas -- Cross View Baptist Church was a hive of activity Monday as volunteers packed shoeboxes with gifts for children in other parts of the world.

The work put the bow on National Collection Week for Operation Christmas Child, an annual project of Samaritan's Purse.

Carolyn Sparkman, Texarkana area coordinator for Operation Christmas Child, said the weeklong campaign brought in nearly 35,000 shoeboxes filled with such things as toys, hygiene items and school supplies. There also were several who made financial contributions.

"We just appreciate everyone who donated shoeboxes, because that will enable us to spread the gospel around the world," said Sparkman, whose area includes Northeast Texas, Miller County in Arkansas and McCurtain County in Oklahoma.

Throughout Collection Week, students from area schools and church youth groups traveled to Cross View to help unload donated shoeboxes from cars, count them, pack them into shipping crates and load them for transport. On Monday, Boy Scouts Troop 30 of Redwater, Texas, packed the last of the shipping crates.

In all, the donations filled six semi-trailers, which are bound for Coppell, Texas, one of eight processing centers in the U.S., Sparkman said. About 800 boxes were shipped in August to places where it is difficult to minister openly.

Along with a gift box, each child will be hand-delivered literature about Jesus Christ and treated to a child-friendly gospel presentation that features clowns and pantomime.

"It is so much fun. They are so excited," Sparkman said in an earlier interview with the Gazette.

After the presentation, the children are invited to participate in a 12-lesson discipleship program that ends with a graduation ceremony.

"They become little missionaries themselves and reach out to other children in their area," said Sparkman, who helped with one such in-person delivery in 2016 in Paraguay.

While Collection Week may be over, the work of Operation Christmas Child never stops, Sparkman said.

"A lot of people contact us throughout the year," she said. "When we have anything in the newspaper they will say, 'You know, we saw your article in the newspaper, and we want to know more about this.'"