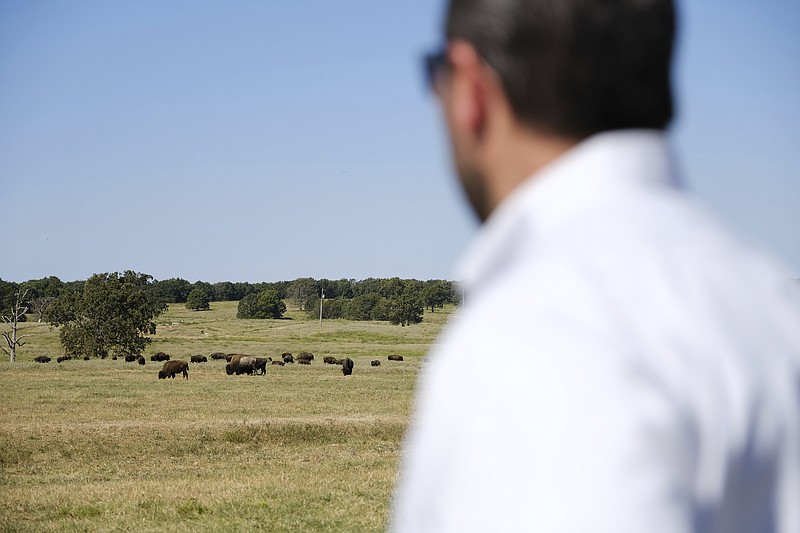 Bryan Warner watches bison in Bull Hollow, Okla., on Sept. 27, 2022. For now the Cherokee are not harvesting the animals, whose bulls can weigh up to 2,000 pounds and stand 6 feet tall, as leaders focus on growing the herd. But bison, a lean protein, could serve in the future as a food source for Cherokee schools and nutrition centers, says Warner, the tribe's deputy principal chief. (AP Photo/Audrey Jackson)

BULL HOLLOW, Okla. -- Ryan Mackey quietly sang a sacred Cherokee verse as he pulled a handful of tobacco out of a zip-close bag. Reaching over a barbed wire fence, he scattered the leaves onto the pasture where a growing herd of bison -- popularly known as American buffalo -- grazed in northeastern Oklahoma.

The offering represented a reverent act of thanksgiving, the 45-year-old explained, and a desire to forge a divine connection with the animals, his ancestors and the Creator.

"When tobacco is used in the right way, it's almost like a contract is made between you and the spirit -- the spirit of our Creator, the spirit of these bison," Mackey said as a strong wind rumbled across the grassy field. "Everything, they say, has a spiritual aspect. Just like this wind, we can feel it in our hands, but we can't see it."

Decades after the last bison vanished from their tribal lands, the Cherokee Nation is part of a nationwide resurgence of Indigenous people seeking to reconnect with the humpbacked, shaggy-haired animals that occupy a crucial place in centuries-old tradition and belief.

"Collectively those tribes manage over 20,000 buffalo on tribal lands," said Troy Heinert, a Rosebud Sioux Tribe member who serves as executive director of the InterTribal Buffalo Council, based in Rapid City, South Dakota. "Our goal and mission is to restore buffalo back to Indian country for that cultural and spiritual connection that Indigenous people have with the buffalo."

Centuries ago, an estimated 30 million to 60 million bison roamed the vast Great Plains of North America, from Canada to Texas. But by 1900, European settlers had driven the species to near extinction, hunting them en masse for their prized skins and often leaving the carcasses to rot on the prairie.

"It's important to recognize the history that Native people had with buffalo and how buffalo were nearly decimated. ... Now with the resurgence of the buffalo, often led by Native nations, we're seeing that spiritual and cultural awakening as well that comes with it," said Heinert, who is a South Dakota state senator.

Historically, Indigenous people hunted and used every part of the bison: for food, clothing, shelter, tools and ceremonial purposes. They did not regard the bison as a mere commodity, however, but rather as beings closely linked to people.

"Many tribes viewed them as a relative," Heinert said. "You'll find that in the ceremonies and language and songs."

Rosalyn LaPier, an Indigenous writer and scholar who grew up on the Blackfeet Nation's reservation in Montana, said there are different mythological origin stories for bison among the various peoples of the Great Plains.

"Depending on what Indigenous group you're talking to, the bison originated in the supernatural realm and ended up on Earth for humans to use," said LaPier, an environmental historian and ethnobotanist at the University of Illinois Urbana-Champaign. "And there's usually some sort of story of how humans were taught to hunt bison and kill bison and harvest them."

Her Blackfeet tribe, for example, believes there are three realms: the sky world, the below world -- that is, Earth -- and the underwater world. Tribal lore, LaPier says, holds that the Blackfeet were vegetarians until an orphaned bison slipped out of the underwater world in human form and was taken in by two caring humans. As a result, the underwater bison's divine leader allowed more to come to Earth to be hunted and eaten.

In Oklahoma, the Cherokee Nation, one of the largest Native American tribes with 437,000 registered members, had a few bison on its land in the 1970s. But they disappeared.

It wasn't until 40 years later that the tribe's contemporary herd was begun, when a large cattle trailer -- driven by Heinert -- arrived in fall 2014 with 38 bison from Badlands National Park. It was greeted by emotional songs and prayers from tribe's people.

"I can still remember the dew that was on the grass and the songs of the birds that were in the trees. ... I could feel the hope and the pride in the Cherokee people that day," Heinert said.

Since then, births and additional bison transplants from various locations have boosted the population to about 215. The herd roams a 500-acre (2-square kilometer) pasture in Bull Hollow, an unincorporated area of Delaware County about 70 miles (113 kilometers) northeast of Tulsa, near the small town of Kenwood.

For now, the Cherokee are not harvesting the animals, whose bulls can weigh up to 2,000 pounds (900 kilograms) and stand 6 feet tall (nearly 2 meters), as leaders focus on growing the herd. But bison, a lean protein, could serve in the future as a food source for Cherokee schools and nutrition centers, said Bryan Warner, the tribe's deputy principal chief.

"Our hope is really not just for food sovereignty's sake but to really reconnect our citizens back in a spiritual way," said Warner, a member of a United Methodist church.

That reconnection in turn leads to discussions about other fauna, he added, from rabbits and turtles to quail and doves.

Originally from the southeastern United States, the Cherokee were forced to relocate to present-day Oklahoma in 1838 after gold was discovered in their ancestral lands. The 1,000-mile (1,600-kilometer) removal, known as the Trail of Tears, claimed nearly 4,000 lives through sickness and harsh travel conditions.

While bison are more associated with Great Plains tribes than those with roots on the East Coast, the newly arrived Cherokee had connections with a slightly smaller subspecies, according to Mackey. The animals on the tribe's lands today are not direct descendants, he explained, but close cousins with which the tribe is able to have a spiritual bond.

"We don't speak the same language as the bison," Mackey said. "But when you sit with them and spend time with them, relationships can be built on ... other means than just language alone: sharing experiences, sharing that same space and just having a feeling of respect. Your body language changes when you have respect for someone or something."

Mackey grew up with Pentecostal roots on his father's side and Baptist on his mother's. He still occasionally attends church, but finds more meaning in Cherokee ceremonial practices.

"Even if (tribal members) are raised in church or in synagogue or wherever they choose to worship, their elders are Cherokee elders," he said. "And this idea of relationship and respect and guardianship -- with the land, with the Earth, with all those things that reside on it -- it's passed down. It still pervades our identity as Cherokee people."

That's why he believes the bison's return to Cherokee lands is so important.

"The bison aren't just meat," he said. "They represent abundance and health and strength." 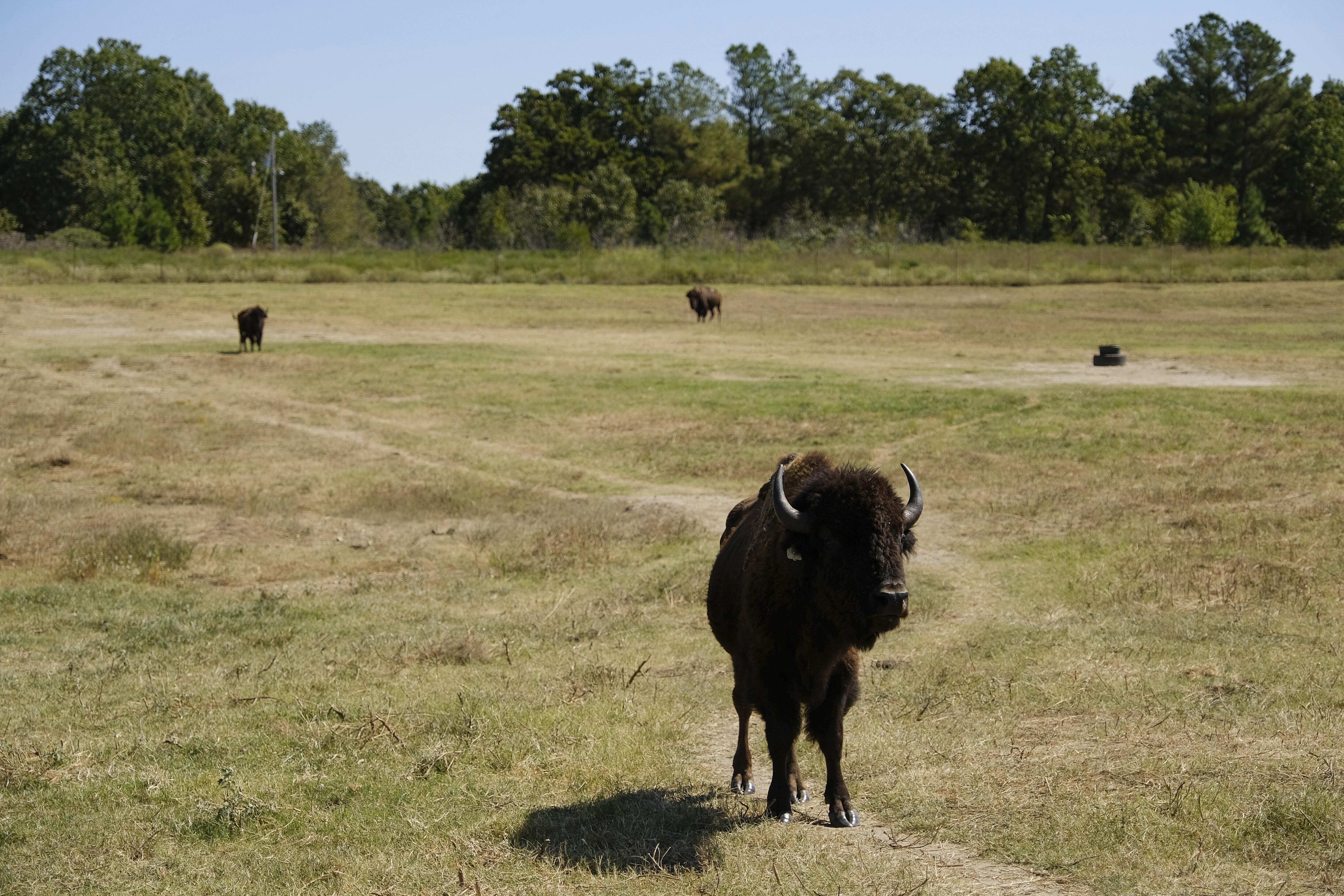 A bison walks along a path through a pasture in Bull Hollow, Okla., on Sept. 27, 2022. In Oklahoma, the Cherokee Nation, one of the largest Native American tribes with 437,000 registered members, had a few bison on its land in the 1970s. But they disappeared. It wasn't until 40 years later that the tribe's contemporary herd was begun. (AP Photo/Audrey Jackson)