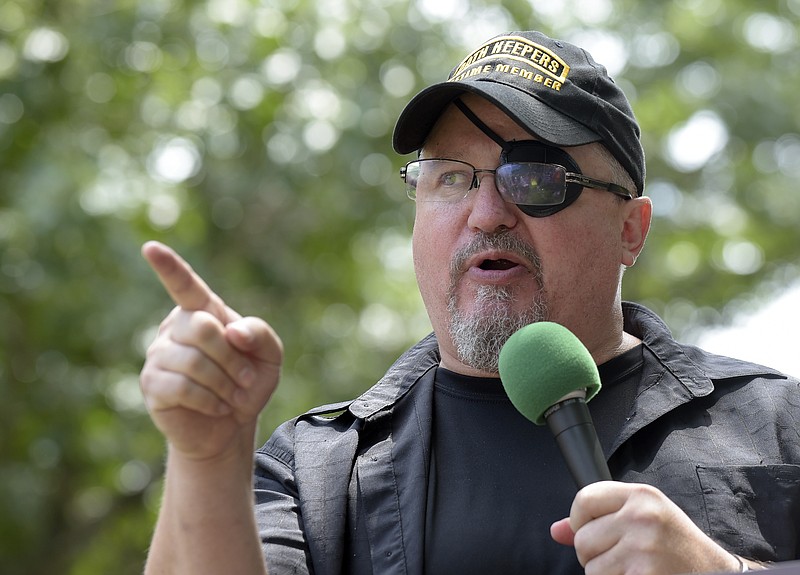 FILE - Stewart Rhodes, founder of the citizen militia group known as the Oath Keepers speaks during a rally outside the White House in Washington, on June 25, 2017. Rhodes was convicted Tuesday, Nov. 29, 2022, of seditious conspiracy for a violent plot to overturn Democrat Joe Biden’s presidential win, handing the Justice Department a major victory in its massive prosecution of the Jan. 6, 2021, insurrection. (AP Photo/Susan Walsh, File)

A Washington, D.C., jury found Rhodes guilty of sedition after three days of deliberations in the nearly two-month-long trial that showcased the far-right extremist group's efforts to keep Republican Donald Trump in the White House at all costs. Rhodes was acquitted of two other conspiracy charges.

Using dozens of encrypted messages, recordings and surveillance video, prosecutors made the case that Rhodes began shortly after the 2020 election to prepare an armed rebellion to stop the transfer of presidential power.

Over seven weeks of testimony, jurors heard how Rhodes rallied his followers to fight to defend Trump, discussed the prospect of a "bloody" civil war and warned the Oath Keepers may have to "rise up in insurrection" to defeat Biden if Trump didn't act.

One of Rhodes' co-defendants -- Kelly Meggs, the leader of the Florida chapter of the Oath Keepers -- was also convicted of the sedition charge, while three other co-defendants were cleared of the charge. Jurors found all five defendants guilty of obstruction of an official proceeding: Congress' certification of Biden's electoral victory.

Rhodes and Meggs are the first people in nearly three decades to be found guilty of the rarely used Civil War-era charge at trial. The trial was the biggest test yet for the Justice Department in its efforts to hold accountable those responsible for attack that shook the foundations of American democracy.

Seditious conspiracy calls for up to 20 years behind bars.

Rhodes' intends to appeal, defense attorney James Lee Bright told reporters. Another Rhodes lawyer, Ed Tarpley, described the verdict as a "mixed bag," adding, "This is not a total victory for the government in any way, shape or form."

"We feel like we presented a case that showed through evidence and testimony that Mr. Rhodes did not commit the crime of seditious conspiracy," Tarpley said.

On trial alongside Rhodes, of Granbury, Texas, and Meggs, were Kenneth Harrelson, another Florida Oath Keeper; Thomas Caldwell, a retired Navy intelligence officer from Virginia; and Jessica Watkins, who led an Ohio militia group.

Jury selection for a second group of Oath Keepers facing seditious conspiracy charges is scheduled to begin next week. Several members of the Proud Boys, including the former national chairman Enrique Tarrio, are also scheduled to go to trial on the sedition charge in December.

Defense attorneys accused prosecutors of twisting their clients' words and insisted the Oath Keepers came to Washington only to provide security for figures such as Roger Stone, a longtime Trump ally. The defense focused heavily on seeking to show that Rhodes' rhetoric was just bluster and that the Oath Keepers had no plan before Jan. 6 to attack the Capitol.

In an extraordinary move, Rhodes took the stand to tell jurors there was no plan to attack the Capitol and insist that his followers who went inside the building went rogue.

Rhodes testified that he had no idea that his followers were going to join the mob and storm the Capitol and said he was upset after he found out that some did. Rhodes said they were acting "stupid" and outside their mission for the day.

Prosecutors said the Oath Keepers saw an opportunity to advance their plot to stop the transfer of power and sprang into action when the mob started storming the Capitol. The Capitol attack was a "means to an end" for the Oath Keepers, Assistant U.S. Attorney Kathryn Rakoczy told jurors in her closing argument.

Jurors heard how Rhodes spent thousands of dollars on an AR-platform rifle, magazines, mounts, sights and other equipment on his way to Washington ahead of the riot. They watched surveillance footage from the Virginia hotel where some Oath Keepers stashed weapons for "quick reaction force" teams prosecutors said were ready to get weapons into the city quickly if they were needed. The weapons were never deployed.

On Jan. 6, Oath Keepers wearing combat gear were seen on camera shouldering their way through the crowd and into the Capitol. Rhodes remained outside like a "general surveying his troops on the battlefield," a prosecutor said. After the riot, Rhodes and other Oath Keepers went to an Olive Garden restaurant to celebrate, according to prosecutors.

The trial revealed new details about Rhodes' efforts to pressure Trump to fight to stay in White House in the weeks leading up to Jan. 6. Shortly after the election, in a group chat that included Stone called "FOS" or "Friends of Stone," Rhodes wrote, "So will you step up and push Trump to FINALLY take decisive action?"

Another man testified that after the riot, Rhodes tried to persuade him to pass along a message to Trump that urged the president not to give up his fight to hold onto power. The intermediary -- a man who told jurors he had an indirect way to reach the president -- recorded his meeting with Rhodes and went to the FBI instead of giving the message to Trump.

"If he's not going to do the right thing and he's just gonna let himself be removed illegally then we should have brought rifles," Rhodes said during that meeting, according to a recording played for jurors. "We should have fixed it right then and there. I'd hang (expletive) Pelosi from the lamppost," Rhodes said, referring to Democratic House Speaker Nancy Pelosi.

Three other Oath Keepers previously pleaded guilty to seditious conspiracy. The last time the Justice Department had secured such a conviction at trial, though, was in the 1995 prosecution of Islamic militants who plotted to bomb New York City landmarks. 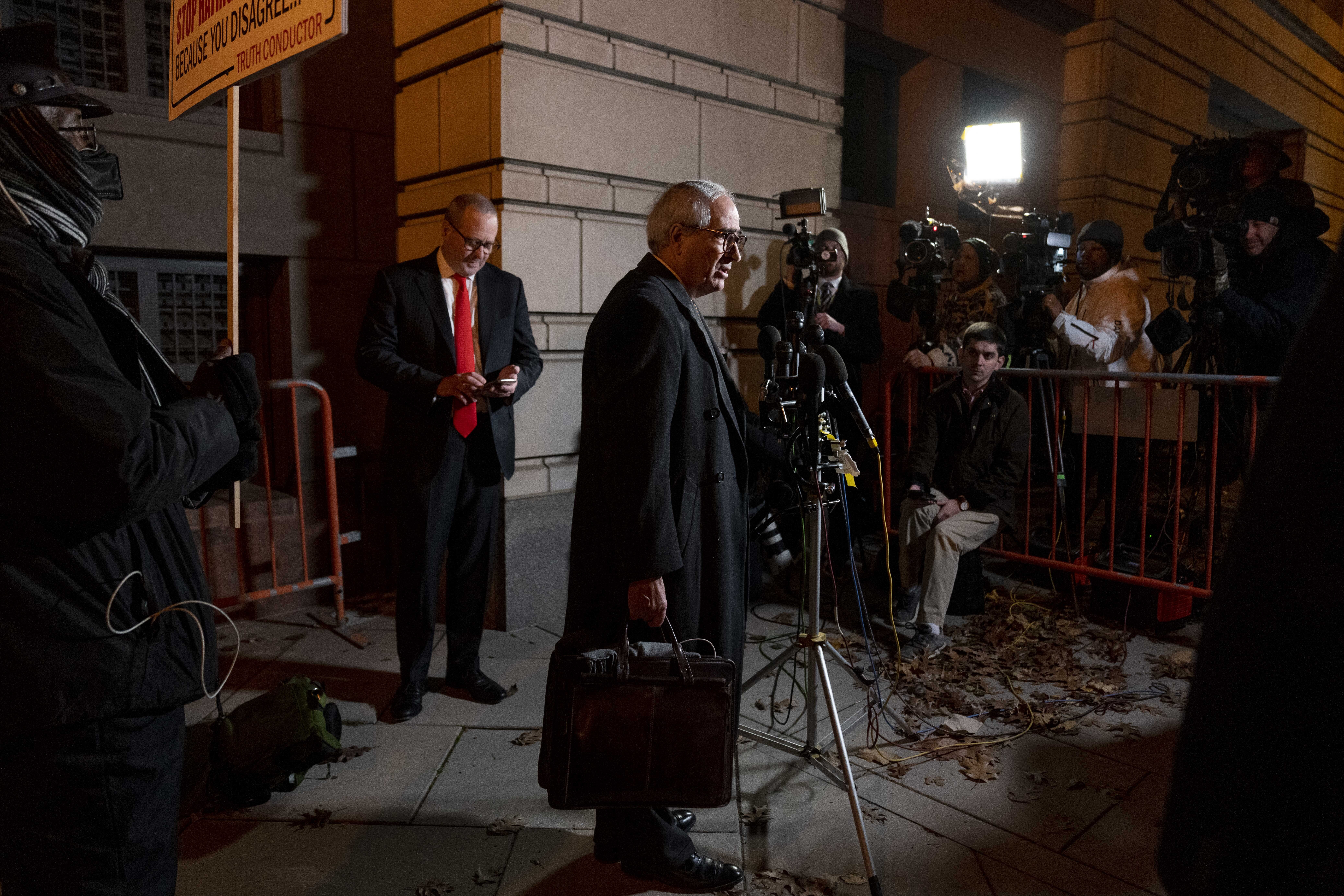 Attorneys for Oath Keepers leader Stewart Rhodes, James Lee Bright, center left, and Edward Tarpley, left, speak to members of the media outside the Federal Courthouse following a verdict in the Rhodes trial in Washington, Tuesday, Nov. 29, 2022. Rhodes was convicted of seditious conspiracy for a violent plot to overturn Democrat Joe Biden's presidential win, handing the Justice Department a major victory in its massive prosecution of the Jan. 6, 2021, insurrection. (AP Photo/Andrew Harnik) 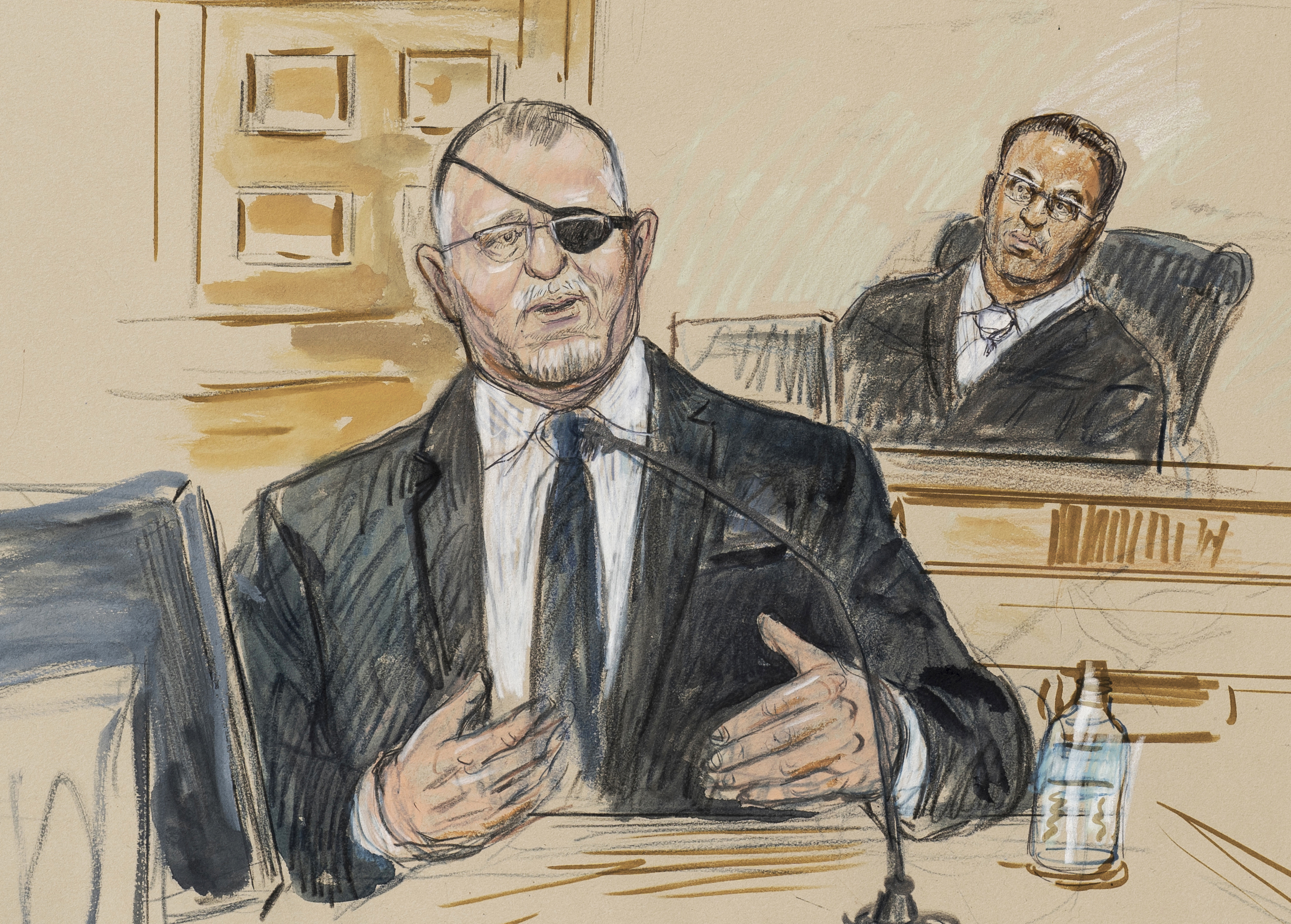 FILE - This artist sketch depicts the trial of Oath Keepers leader Stewart Rhodes, left, as he testifies before U.S. District Judge Amit Mehta on charges of seditious conspiracy in the Jan. 6, 2021, attack on the U.S. Capitol, in Washington, Nov. 7, 2022. Rhodes was convicted of seditious conspiracy on Nov. 29. (Dana Verkouteren via AP, File) 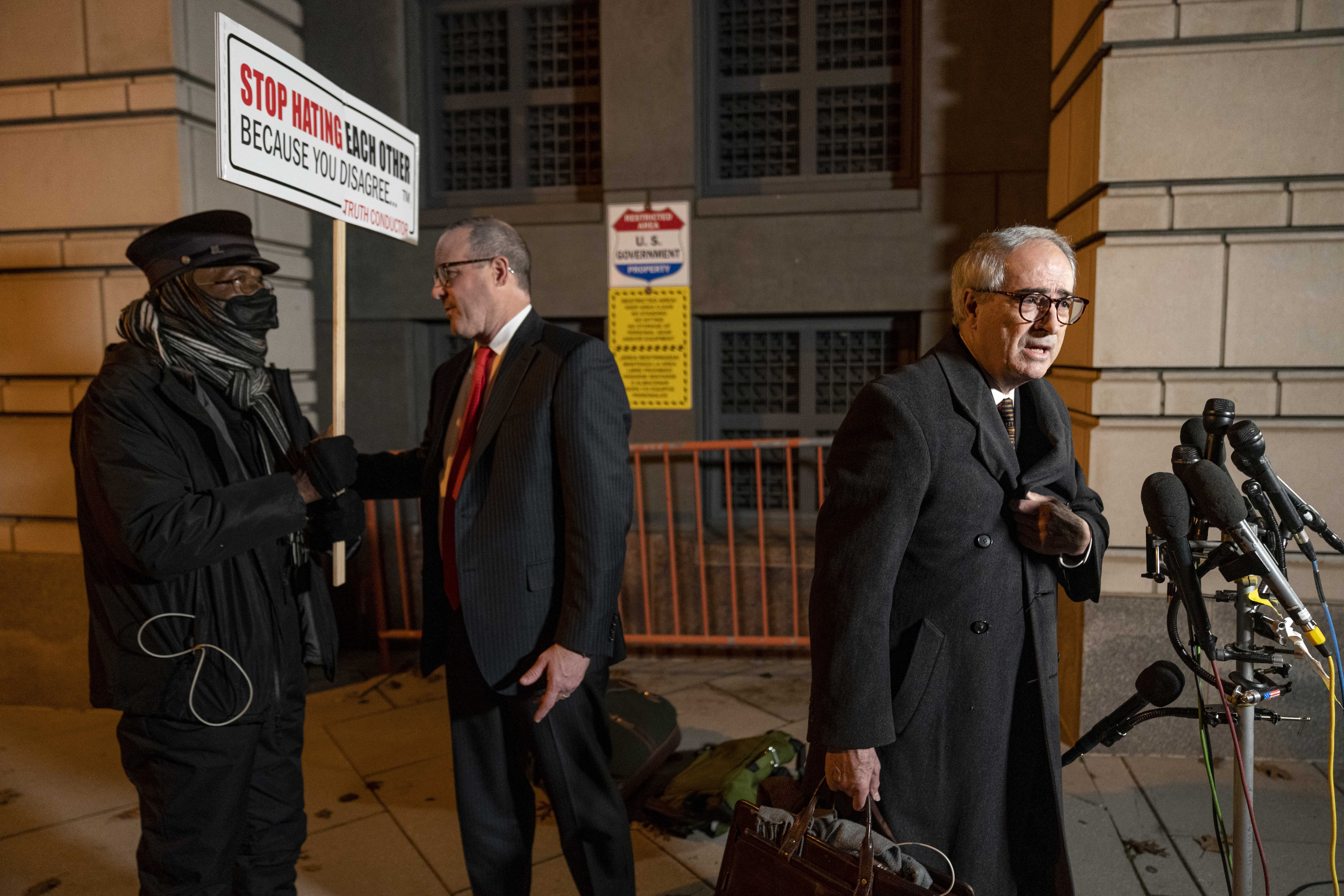 A man holding a sign that reads "Stop Hating Each Other Because You Disagree" refuses to move from behind The attorneys for Oath Keepers leader Stewart Rhodes Edward Tarpley, right, and James Lee Bright, center, as they speak to members of the media outside the Federal Courthouse following a verdict in the Stewart Rhodes trial in Washington, Tuesday, Nov. 29, 2022. Rhodes was convicted of seditious conspiracy for a violent plot to overturn Democrat Joe Biden's presidential win, handing the Justice Department a major victory in its massive prosecution of the Jan. 6, 2021, insurrection. (AP Photo/Andrew Harnik)