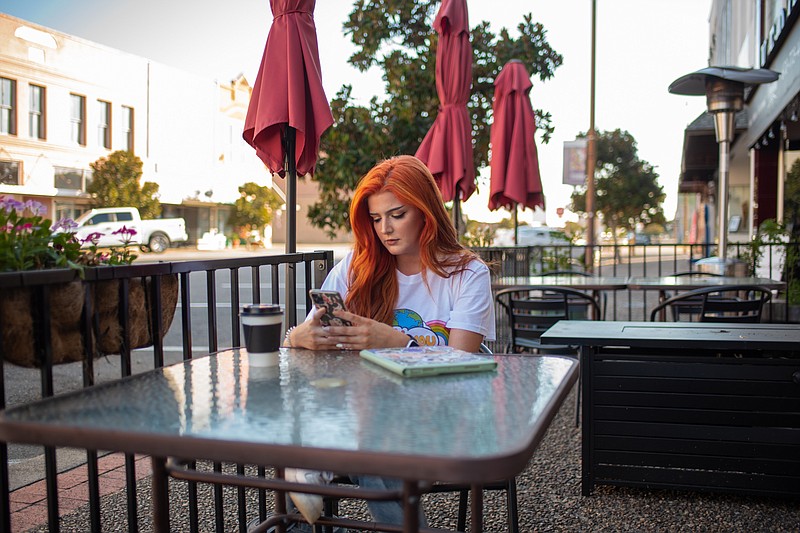 Tessas McCloy posts to her Facebook page on Thursday while at the outdoor seating area of Verona Restaurant in Downtown Texarkana, Arkansas. McCloy is a new content creator and is paid by Meta for successful posts she's makes to Facebook. (Staff photo by Erin DeBlanc)

Texarkana has its own paid Meta digital creators who are building deeper connections with individuals in their communities and giving followers a glimpse into their everyday lives.

Tessa McCloy joined Facebook in February 2007. In July, she opted to participate in the Meta content creator program and has grown her audience to approximately 4,936 Facebook friends and more than 5,600 followers.

"One day at work, I was just getting on Facebook to scroll through my news feed, and a little box popped up saying, 'We've noticed you've been getting a lot of interactions. Do you want to learn more about getting paid for your content?'" McCloy said. "Initially, I was kind of skeptical, because I didn't feel like I really was getting many interactions, but figured why not."

Content creators are paid by Meta for unique interactions on Facebook through a status, picture, video, shared link and other forms of original content. Interactions are defined as liking, commenting, clicking on the plus more button and sharing an original post from a creator's page.

"It only counts if you posted it personally, though, so anytime you share someone else's posts, it doesn't count," McCloy said.

In order for McCloy and other creators to get paid for their content creation, they have to earn a minimum of $100 for total monthly engagement.

"When I first started, I assumed it would take me months to get there," she said.

McCloy began the creator program with Meta close to her son's seventh birthday, so there was an abundance of content she was able to produce. Within a week she had made $24 for her posts.

Even her friend requests have seen a boost.

"The most I've gotten in a day was over 1,000 requests," McCloy said, adding that slow days bring about 50 requests.

With a flood of new Facebook friends since starting as a content creator, McCloy has been able to consistently and rapidly grow her reach and engagement for the content she produces.

"If you're ever wondering who is getting paid to post, when you click on their page the first section in their About Me section will say Digital Creator," McCloy said.

"I would say about 90% of my content is me advertising or trying to find resources for UV," he said.

"It has been nice connecting to the community online," Foltz said. "When we share our stories, we help others who may be going through similar things. I think it's nice that we have a place where we can all connect, especially with our busy lives."

McCloy said her favorite posts on Facebook are the ones where she inquires about little details in people's lives, such as asking followers to share photos of their pets or their opinions on a specific subject.

"I am immensely curious and love getting to learn new things about those around me," she said, adding that being a content creator has helped her to get out of her comfort zone and engage with other people she ordinarily would not have had the opportunity to meet.

"Seeing so many people relate to your content is very validating," McCloy said. "I've definitely made a few friends from it."

That does not mean that producing content is never stressful.

"I had to turn off notifications for my Facebook and Messenger, because it's always going off. I'm the type of person who has to check every single notification, so when it first started I was always on my phone," said McCloy, who works full time as a LifeNet dispatcher and is in EMT school at Texarkana College.

"I don't always have the time to commit to it," she said. "That being said, I am able to schedule my posts days in advance so that I can set my phone aside and focus on other things."

After a few new adjustments, McCloy has enjoyed the balance of working as a creator when she can and getting to know things about people that she never knew before.

"I've learned what people fear, what makes them happy, their favorite animals, colors, movies," McCloy said. "I also get to see inside their lives, their talents, families and best friends. The world is full of so many beautiful people and personalities."