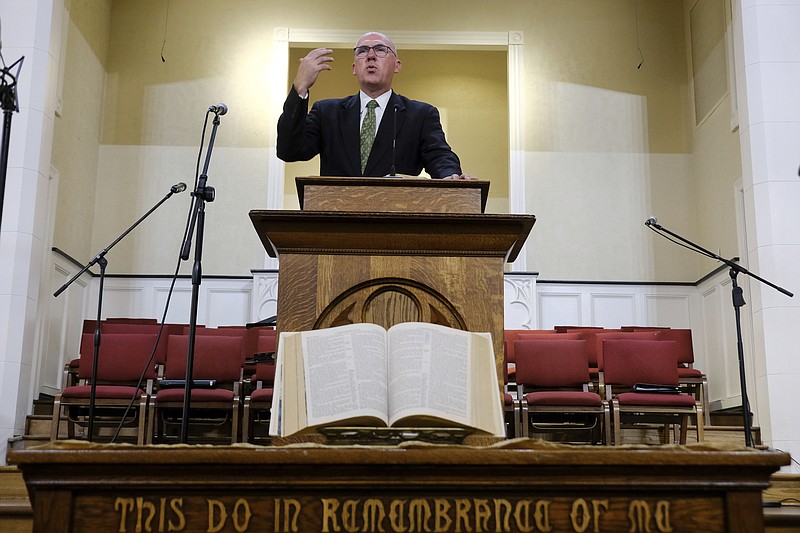 Pastor Bart Barber, president of the Southern Baptist Convention, preaches from the pulpit Sunday, Sept. 25, 2022, at First Baptist Church of Farmersville, Texas. For nearly a quarter-century, Barber enjoyed relative obscurity as a pastor in this town of 3,600, about 50 miles northeast of Dallas. That changed in June as delegates to the Southern Baptist Convention’s annual meeting in California chose Barber to lead the nation’s largest Protestant denomination at a time of major crisis. (AP Photo/Audrey Jackson)

FARMERSVILLE, Texas -- A sweating Bart Barber trekked across a pasture in search of Bully Graham, the would-be patriarch of the rural pastor's fledgling cattle herd.

With the temperature in the mid-90s, the 52-year-old Texan found the bull -- whose nickname reflects his owner's affection for the late Rev. Billy Graham -- and 11 heifers cooling under a canopy of trees.

"Hey, baby girl," Barber said as he patted a favorite cow he dubbed Lottie Moon after the namesake of his denomination's international missions offering.

For nearly a quarter-century, Barber enjoyed relative obscurity as a minister in this town 50 miles northeast of Dallas. That changed in June as delegates to the Southern Baptist Convention's annual meeting in Anaheim, California, chose Barber to lead the nation's largest Protestant denomination at a time of major crisis.

The previous month a scathing, 288-page investigative report hit the denomination's 13.7 million members. It laid out the findings of an independent probe detailing how Southern Baptist leaders stonewalled and denigrated survivors of clergy sex abuse over two decades while seeking to protect their own reputations.

In August, SBC leaders revealed that the Department of Justice was investigating several of its major entities, giving few details but indicating that the inquiry concerned the sex abuse allegations.

Barber's background as a trusted, small-town preacher -- not to mention his folksy sense of humor -- helps explain why fellow Baptists picked him.

"In this moment where I think there's a lot of widespread distrust of these big institutions, I think a lot of people find it refreshing that the one leading us is an everyday pastor," said Daniel Darling, director of the Land Center for Cultural Engagement at Southwestern Baptist Theological Seminary in Fort Worth, Texas.

A staunch theological conservative, Barber touts biblical inerrancy, opposes women serving as pastors and supports abortion bans. In running for SBC president, he expressed a desire to be a peacemaker and a unifier.

The SBC faces multiple challenges. Rank-and-file Baptists have demonstrated a strong commitment to implementing sex abuse reforms, but the final outcome remains unclear. The denomination also has a problem with falling membership, which has slid 16% from its 2006 peak.

Nathan Finn, a church historian and provost of North Greenville University in South Carolina, agreed that Barber's small-town appeal is a big part of why Baptists turned to him.

"Though he is a well-educated church historian and an expert on SBC history and polity, Bart is not an elitist," Finn said via email. "He gives the impression that he would rather be working on his farm than hobnobbing with denominational leaders."

After recently appointing an abuse task force that will make recommendations at next year's annual meeting in New Orleans, Barber said identifying solutions to the problem is his top priority.

Barber grew up in a Southern Baptist family in Lake City, Arkansas. Baptized just before his sixth birthday, he felt God calling him to ministry at age 11 and preached his first sermon at 15.

His late father, Jim, ran the home office for an Arkansas congressman, a Democrat named Bill Alexander. His stay-at-home mother, Carolyn, now 77, taught him to read by the time he entered kindergarten.

Often his dad would bring politicians by the house, he recalled, and his mom would make chicken pot pie or smothered steak with mashed potatoes and gravy.

"Here we were in very small-town Arkansas -- not a lot of money, not a lot of fame or anything like that -- and a gubernatorial candidate would stop by the house," Barber said.

He attended Baptist-affiliated Baylor University in Waco, Texas, where he met his future wife, Tracy, in a campus ministry. They have two children: Jim, 19, and Sarah, 16.

He also earned a master's in divinity and a doctorate in church history from Southwestern Baptist Theological Seminary. He pastored in Mill Creek, Oklahoma, and Royse City, Texas, before moving to Farmersville in 1999.

"He has the heart of a pastor. He is someone who really cares about folks," Tracy Barber said of her husband of 30 years. "The people in our church are our family."

Steve Speir, 74, is a 42-year member of First Baptist Church of Farmersville, which averages Sunday attendance of about 320. His wife, Linda, plays the church organ.

Barber is "very organized," Speir said. "He won't keep anything hidden. Our entire church has full disclosure on all financial matters."

Another longtime member, Donna Armstrong, 75, said: "We never doubt whether he's biblically based or loves the Lord."

On a recent Sunday, Barber got up at 4:30 a.m., attended a deacons meeting at 7 and preached at 8:30 and 11. After a nap, he drove to Dallas and flew to Nashville, Tennessee, for meetings at the Southern Baptist Convention headquarters.

"It is stressful. It is time-consuming. I do enjoy it," Barber said of his new job.

Back home later in the week, he rose before the sun on Saturday to help his daughter load a 1,000-pound heifer named Iris into a cattle trailer. They drove a half-hour to a livestock show.

There, Barber greeted special-needs children who came to see the animals, used clippers to help Sarah shave Iris and periodically shoveled manure into a garbage can.

He also enjoyed a friendly chat with rancher Joni Brewer about her miniature Hereford cows. Brewer attends a Southern Baptist church, but she had no clue about Barber's role with the SBC.

"I live out in the country," she said, "so you don't always see all of those things."

But James Callagher, who knows Barber through 4-H Club activities, described his friend as perfect for the job.

"The thing that sticks out to me is just authenticity," said Callagher, who is Catholic. "He lives his faith, and as Christians we have a lot of common ground."

In addition to such in-person contacts, Barber maintains an active Twitter presence. Just in the last week, he posted pictures of his cows, debated biblical qualifications for church leaders and shared SBC plans for Hurricane Ian relief.

Barber and his family live in a church-owned parsonage, but last year they bought 107 acres of land where they're raising their Santa Gertrudis beef cattle.

In a recent sermon, Barber joked that a boyhood job chopping cotton and hoeing soybeans was what inspired him to go into ministry. Asked on the drive back from the livestock show if he's now enjoying life as a farm owner, Barber smiled.

"Not only that, but I'm surviving everything else because of how I'm enjoying it," he said. "It's a great source of tranquility for me." 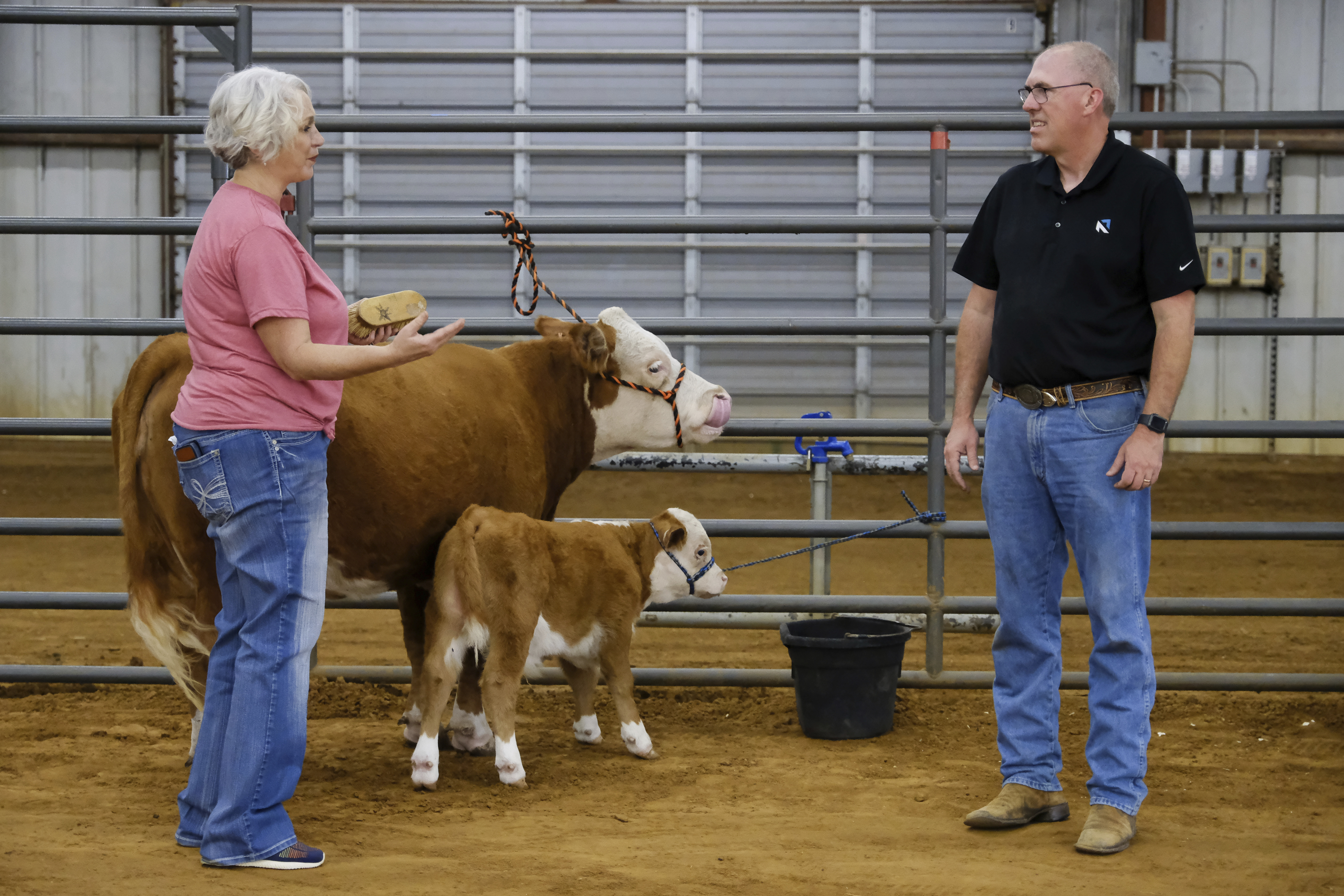 Joni Brewer talks to Bart Barber while preparing her miniature Hereford cow and calf for the Celebrate the Possibilities Livestock Show 2022 hosted by local chapters of the 4-H Club and National FFA Organization on Saturday, Sept. 24, 2022, in McKinney, Texas. Barber’s background as a trusted, small-town preacher — not to mention his folksy sense of humor and self-deprecating style — helps explain why fellow Baptists picked him as their new leader. (AP Photo/Audrey Jackson)