Nobel win for Swede who unlocked secrets of Neanderthal DNA 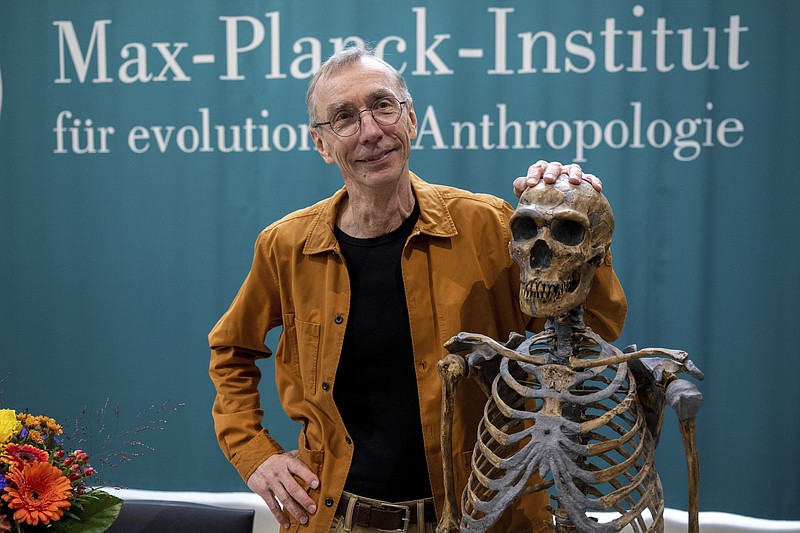 Swedish scientist Svante Paabo stands by a replica of a Neanderthal skeleton at the Max Planck Institute for Evolutionary Anthropology on Monday, Oct. 3, 2022, in Leipzig, Germany. Paabo was awarded the 2022 Nobel Prize in Physiology or Medicine for his discoveries on human evolution. (Hendrik Schmidt/dpa via AP)

LEIPZIG, Germany -- Swedish scientist Svante Paabo won the Nobel Prize in medicine Monday for discoveries in human evolution that unlocked secrets of Neanderthal DNA that helped us understand what makes humans unique and provided key insights into our immune system, including our vulnerability to severe COVID-19.

Techniques that Paabo spearheaded allowed researchers to compare the genome of modern humans and that of other hominins -- the Denisovans as well as Neanderthals.

"Just as you do an archeological excavation to find out about the past, we sort of make excavations in the human genome," he said at a news conference held by Max Planck Institute for Evolutionary Anthropology in Leipzig.

While Neanderthal bones were first discovered in the mid-19th century, only by understanding their DNA -- often referred to as the code of life -- have scientists been able to fully understand the links between species.

This included the time when modern humans and Neanderthals diverged as a species, around 800,000 years ago.

"Paabo and his team also surprisingly found that gene flow had occurred from Neanderthals to Homo sapiens, demonstrating that they had children together during periods of co-existence," said Anna Wedell, chair of the Nobel Committee.

This transfer of genes between hominin species affects how the immune system of modern humans reacts to infections, such as the coronavirus. People outside Africa have 1-2% of Neanderthal genes. Neanderthals were never in Africa, so there's no known direct contribution to people in sub-Saharan Africa.

Paabo and his team managed to extract DNA from a tiny finger bone found in a cave in Siberia, leading to the recognition of a new species of ancient humans they called Denisovans.

Wedell called it "a sensational discovery" that showed Neanderthals and Denisovans were sister groups that split from each other around 600,000 years ago. Denisovan genes have been found in up to 6% of modern humans in Asia and Southeast Asia, indicating interbreeding occurred there too.

"By mixing with them after migrating out of Africa, Homo sapiens picked up sequences that improved their chances to survive in their new environments," Wedell said. For example, Tibetans share a gene with Denisovans that helps them adapt to high altitude.

Paabo said he was surprised to learn of his win, and at first thought it was an elaborate prank by colleagues or a call about his summer home.

"So I was just gulping down the last cup of tea to go and pick up my daughter at her nanny where she has had an overnight stay, and then I got this call from Sweden," he said in an interview on the Nobel Prizes homepage. "I of course thought it had something to do with our little summer house in Sweden. I thought, 'Oh the lawn mower's broken down or something.'"

He also mused about what would have happened if Neanderthals had survived another 40,000 years.

"Would we see even worse racism against Neanderthals, because they were really in some sense different from us? Or would we actually see our place in the living world quite in a different way when we would have other forms of humans there that are very like us but still different," he said.

Paabo, 67, performed his prizewinning studies at the University of Munich and at the Max Planck Institute.

After the news conference, colleagues threw Paabo into a pool of water during the celebrations. Pääbo took it with humor, splashing his feet a little and laughed.

Scientists in the field lauded the Nobel Committee's choice.

David Reich, a geneticist at Harvard Medical School, said he was thrilled, fearing the field of ancient DNA might "fall between the cracks."

By recognizing that DNA can be preserved for tens of thousands of years -- and developing ways to extract it -- Paabo and his team created a completely new way to answer questions about our past, Reich said.

"It's totally reconfigured our understanding of human variation and human history," said Reich, who is paid by the Howard Hughes Medical Institute, which also supports The Associated Press' Health and Science Department.

Dr. Eric Green, director of the National Human Genome Research Institute at the U.S. National Institutes of Health, called it "a great day for genomics," a relatively young field first named in 1987.

The Human Genome project, which ran from 1990-2003, "got us the first sequence of the human genome, and we've improved that sequence ever since," Green said.

When you sequence DNA from an ancient fossil, you only have "vanishingly small amounts," Green said. Among Paabo's innovations was figuring out methods for extracting and preserving these tiny amounts. He was then able to lay pieces of the Neanderthal genome sequence against the human sequencing of the Human Genome Project.

Paabo's team published the first draft of a Neanderthal genome in 2009, and sequenced more than 60% of the full genome from a small sample of bone, after contending with decay and contamination from bacteria.

"We should always be proud of the fact that we sequenced our genome. But the idea that we can go back in time and sequence the genome that doesn't live anymore and something that's a direct relative of humans is truly remarkable," Green said.

Paabo said they discovered during the pandemic that "the greatest risk factor to become severely ill and even die when you're infected with the virus has come over to modern people from Neanderthals. So we and others are now intensely studying the Neanderthal version versus the protective modern version to try to understand what the functional difference would be."

Paabo's father, Sune Bergstrom, won the Nobel prize in medicine in 1982, the eighth time the son or daughter of a laureate also won a Nobel Prize. In his book "Neanderthal Man: In Search of Lost Genomes," Paabo described himself as Bergstrom's "secret extramarital son" -- something he also mentioned briefly at the news conference.

Nobel Prize announcements continue Tuesday with the physics prize, chemistry on Wednesday and literature on Thursday. The Nobel Peace Prize will be announced Friday and the economics award on Oct. 10.

Last year's medicine recipients were David Julius and Ardem Patapoutian for their discoveries into how the human body perceives temperature and touch.

The prizes carry a cash award of 10 million Swedish kronor (nearly $900,000) and will be handed out on Dec. 10. The money comes from a bequest left by the prize's creator, Swedish inventor Alfred Nobel, who died in 1895.