Before Blue-eyed Blonde became Beautiful Bride, she and her fabulous, forever friend – Mustang Cindy we shall call her – loved to run all over town in a Mustang convertible. Think Thelma and Louise.

Alas, time always brings change. Grandchildren joined the mob, persuading Cindy to not only slow her Mustang down but to put her feet on the ground for a more sedate but roomier Ford Explorer. The first of those rugrats is now in high school and if Granny was inclined to ask their views on seven-passenger SUVs, the response would be brief.

My advice, rarely requested, would be to dump the oversized station wagon in favor of something teens don't mind being seen in while being dropped off at volleyball practice, something like the "all-new" 2024 Mustang. It's due in showrooms in April-ish, but order banks are open now.

This will be the seventh generation 'Tang, and my hunch is it will be the last gas-powered version. It might be nice to drive one of these for a few years and then tuck it into a hermetically sealed container.

Ford's switch to electric sports cars won't be immediate. Ford's EV manufacturing complex near Memphis, BlueOval City, should open in 2026-ish. Manufacturers are spending heavily to develop next-generation – read lighter and more powerful – batteries and motors. That technology bolted into a lovely and lightweight coupe might be a home run. Insiders are thinking 2010-ish.

Yes, yes, Ford already has the well-received all-electric Mustang Mach-E, but the only thing it has in common with a traditional Mustang is the name. It's nearly as large as the Cindy's Explorer, even though it is head-snapping fast – 60 mph comes in 5.2 seconds – and is quickly establishing a reputation as the most trouble-free EV on the market.

Ford built 27,722 Mach-Es in the first eight months of 2022 and sold more than that. You want one, you wait. In the same span, by the way, Ford sold 33,144 gas-powered Mustangs, according to data gathered by The Detroit Bureau.com.

Not so much new as better

Quote marks went around "all-new" because while 85 percent of the new Mustang's parts are new, they are minor changes to those in the current model.

This is good because it allows the company to make money and customers to own reliable cars. Ford, which has the highest warranty costs in the industry, is following Toyota's lead by taking existing modules and incrementally improving them. This approach allows engineers to address known defects and to deploy advancements in technology and materials.

Mazda has a name for this process, SkyActive, in which engineers make a boatload of subtle systemic changes to electrical, mechanical, suspension, and chassis systems, and the net effects are striking.

It also makes enormous sense economically. R&D costs on a new vehicle can run $5 billion or more. Coming up with something "new" without redesigning the wheel, retooling the factories, and retraining the workers makes for more attractive earnings margins. Considering Ford sells more pickups in a month than it sells Mustangs in a year, careful grooming of the existing product into a 21st-century car is the only strategy that makes sense.

Thus, the new Mustang bears a striking resemblance to the old one. The design adds modern chiseled looks to its heritage-inspired design, though the roof angles a bit higher above the doors, which makes it easier to enter when wearing a helmet. Make no mistake track-ready variations will be in the mix at rollout.

A low horizontal brow across the front emphasizes width, while the upper grille design shape is reminiscent of the generation-one design in which I passed my first driving test. Tri-Bar LED headlamps continue Mustang's classic lighting signature. The rear overhang is shorter, which recalls the first Mustangs' proportion. The rear is wider and chiseled, giving the car a sprinter's stance.

And, oh yes, Cindy, a convertible is in the product folder. A simple, one-touch activation with a single-handle center latch opens and closes a fully lined and insulated fabric roof. Perfect for a mid-winter run to the beach, or Florida.

Sit in the driver's seat, and the new Mustang feels new. A fighter jet-inspired cockpit comes to life in two flowing and curved displays that can be quickly customized to show information the driver wants or needs.

A 12.4-inch digital instrument cluster can be customized to display different animated designs and new drive-mode-dependent visuals. Driver's can even dial up a cluster that looks like traditional analog dials.

A 13.2-inch center stack sits behind a pane of glass that angles toward the driver. Based on the same Unreal Engine 3D creation tool used in video games, the car's setup presents real-time graphical renderings. Settings, for everything from music to interior ambient lighting, can be adjusted by simply swiping the graphic to rotate the car virtually in a true gamified style.

The car is loaded with tech goodies, from wireless charging to extended voice commands. It also comes with a full complement of driver-assist features, with Ford Co-Pilot360™, which have been shown to dramatically reduce accidents and injuries.

The new Mustangs will be powered by a pair of proven Ford engines, a 2.3-Liter turbocharged four-cylinder, and a naturally aspirated 5.0-Liter Coyote V8. Both are made more powerful by new advanced engine technologies.

Both also come with a key-fob-controlled Remote Rev because, doggone it, a Mustang ought to sound like a Mustang.

The current 2.4-L puts out around 310 horsepower, and the Coyote V-8 about 460. Ford won't commit to power ratings for the new motors but hints at sharp increases. For the record, we've had a lot of fun thrashing the 4-banger around a track and still managed to get around 29 mpg on the highway headed home. The V-8 is not as fuel efficient, but for long-term ownership, breathing naturally rather than through a turbocharger is a good thing.

A 10-speed transmission is standard, but a six-speed manual is available on GT models. I'm a purist who loves shifting his gears, but I can't out-shift Ford's automatic. The folks at the Blue Oval have been working with this thing for five years and have it nicely dialed in for every application I've tested, from Raptors on Forest Service Roads to Mustangs through mountain passes. 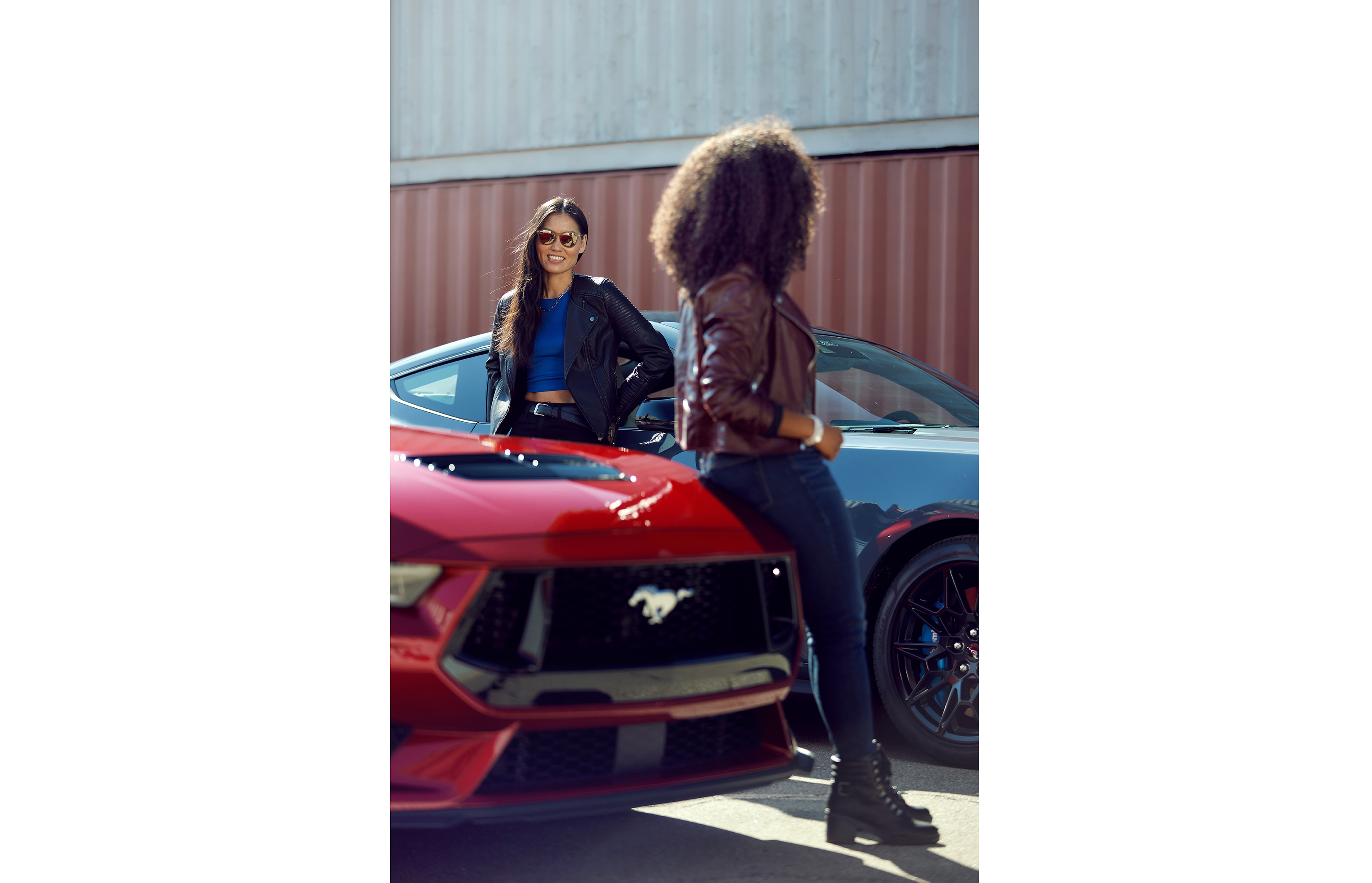