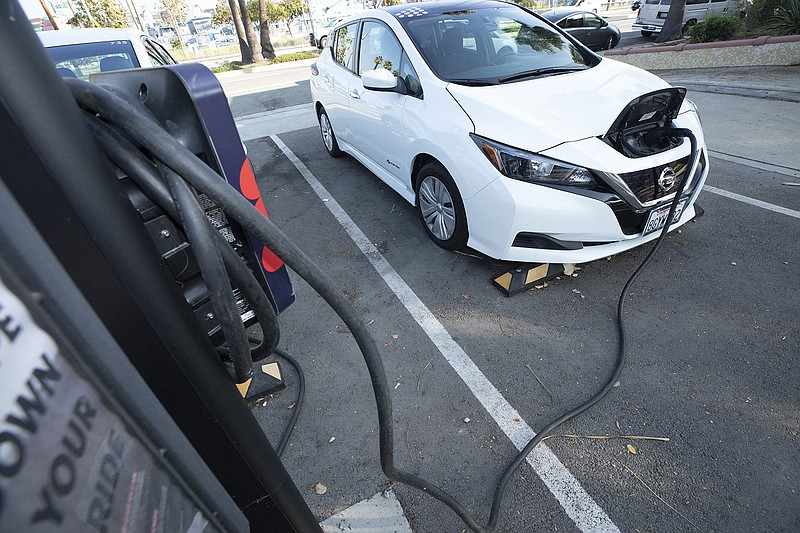 An electric car charges up in San Pedro, California, Thursday, Dec. 2, 2021. Under a new proposal from the California Air Resources Board, more than a third of new passenger cars and trucks sold in California in 2025 would have to be zero-emission vehicles. (Myung J. Chun/Los Angeles Times/TNS)

WASHINGTON -- The Biden administration is asking for a waiver of "Buy American" rules for federally-funded electric vehicle chargers to more rapidly roll out the infrastructure needed to scale up EV adoption.

Domestic content rules say 100% of steel, iron, and manufactured goods made mostly of steel and iron in federal highway projects must be made in the United States.

But only a handful companies can build fast EV chargers that would meet the requirements, according to a filing submitted Wednesday by the Federal Highway Administration.

The agency argued that requiring companies to stick to the rules would significantly slow charger deployment as officials prepare to dole out $5 billion for chargers over the next five years under the bipartisan infrastructure law.

"Immediately applying all applicable domestic content preferences for these projects would be inconsistent with the public interest," the agency wrote. "It is likely to delay immediate implementation of (the funding) for EV chargers, which are a key strategy for reducing greenhouse gas emissions."

The request illustrates the tension between the administration's interests in rapidly decarbonizing the economy and reshoring manufacturing.

President Joe Biden has long promised to create millions of high-paying jobs by advancing clean energy and other climate-related goals. But supply chains for critical components of green technology -- from the minerals in batteries to the microchips in cars and electronics -- are not always reliably based in the U.S. or with allies.

The infrastructure law sought to create a national network of EV chargers along highways to decrease "range anxiety," in which consumers stick with gas cars because they're worried they won't be able to drive long distances in an EV. Auto experts say it is one of the top barriers to EV adoption.

The law requires most of that funding to go to DC Fast chargers, which most closely mimic the experience of stopping at a gas station by charging an EV to 80% in around 30 minutes.

Thirteen companies told FHWA they could build chargers that fit the requirements, but only three -- ChargePoint, FreeWire Technologies Inc. and Rhombus -- said they could build fast chargers. Industry experts said demand for chargers is already outpacing supply, and funding for the national charging network will only exacerbate that.

Instead, FHWA, an agency within the Department of Transportation, proposed weakened Buy American requirements that would ramp up over time.

Under the proposal, all chargers installed in 2022 would qualify for a full waiver of domestic sourcing requirements. For the first half of 2023, only chargers with final assembly in the U.S. would qualify. In the second half of 2023, the only qualifying chargers would have at least 25% U.S.-made components making up the total cost. By January 2024, that threshold would rise to 55%.

This approach would "provide a strong incentive" for companies to quickly shift to domestic manufacturing, according to the agency's filing. "We seek to maximize the use of American made products and materials while also ensuring successful and timely delivery of these critical EV infrastructure projects."

Lack of reliable and easy-to-access charging is one of the top obstacles to buying an EV, said Mike Ramsey, a transportation and mobility analyst for Gartner Inc.

"It is important that the chargers are secured now," he said via email. "Longer term, it would be good for America to source more of its vital equipment either in the U.S. or with close trading partners, however."

Federal law only allows a waiver of Buy American rules when applying them would be inconsistent with the public interest or when there is not sufficient quantity or quality of the product available in the U.S.

These sorts of requirements often have "short-term unintended consequences and this is one of them," said Ramsey. "I expect a waiver to be granted because while the administration is seeking to create industrial policy, supply chains can't be created overnight."

FHWA is seeking comments on the proposed rules through Sept. 30.