COMMENTARY | Robots are key to winning the productivity war 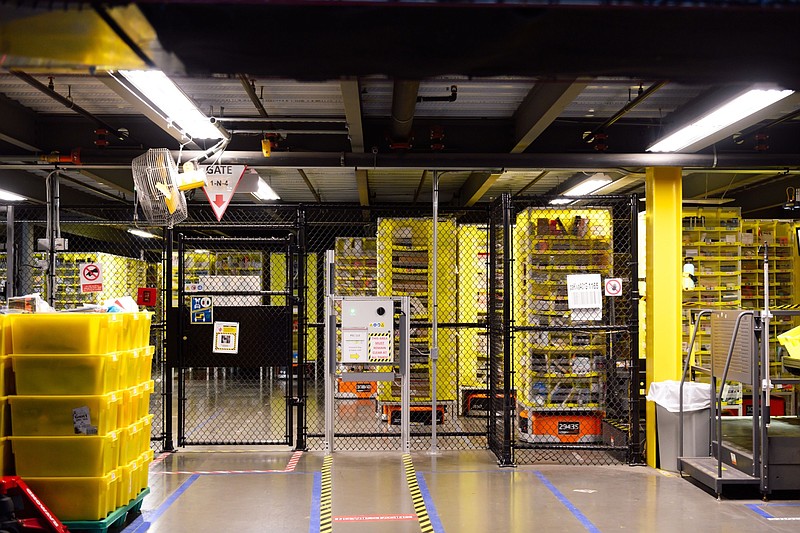 Warehouse robots at the Amazon.com BFI4 fulfillment center in Kent, Washington, on Aug. 5, 2021. MUST CREDIT: Bloomberg photo by Chona Kasinger.

For those who believe that the surge of interest in warehouse automation and robotics was just a pandemic fling that will fade as the labor market loosens, meet Malcolm Wilson.

He's the chief executive officer of GXO Logistics Inc., which operates about 900 warehouses, mostly in the U.S. and Europe for customers including Nike and Nestle. The Greenwich, Connecticut-based company, which cobbles together different types of robots tailored to a client's needs, signed up a record $475 million of new business in the second quarter and has a pipeline of automated logistics projects that extend into 2024.

Even though GXO is one of the most advanced warehouse operators, the trend of adopting automation is only getting started. About a third of GXO's warehouses are automated, double the percentage of about five years ago. GXO expects to have 60% to 70% of its warehouses operating mostly with machines in the next five years, he said. The warehousing industry as a whole is only about 5% automated, he said in a phone interview.

That will change, and it's a transformation that is picking up speed. In the U.S., orders for industrial robots rose to a record 40,000 last year from 31,000 in 2020 and 30,000 in 2019. If anything, the U.S. lags behind on robot adoption. In the latest worldwide data from the International Federation of Robotics, Asia's installations of 266,000 robots in 2020 topped those in the Americas by more than sixfold. For robot density, which measures the number of these machines for every 10,000 workers, the U.S. is seventh, trailing manufacturing powerhouses such as South Korea, Japan and Germany.

The pandemic and the lingering labor shortage that came with it will accelerate this adoption of automation, which should be viewed as beneficial for the economy, for companies and even for workers. It bolsters productivity, which allows salaries to rise without adding to inflation.

This latest wave of U.S. warehouse and factory automation is unique because it comes at a time of near full employment, which helps allay some of the fears that the robots are coming to take everyone's job. This rapid rise of robot demand hasn't put thousands of workers on the street. Manufacturing employment increased by 271,000 in the first six months of this year, and the unemployment rate has dropped to 3.5%, matching the pre-pandemic level in 2019 that was the lowest since the late 1960s.

There will still be warehouse jobs for people for a long time to come. In some of GXO's operations, such as performing sub-assembly work for Boeing, the volume isn't large enough to justify the automation. Workers will always be needed to tend to the machines and do the tasks that involve solving problems. And although the end-of-arm tools for robots have advanced rapidly, nothing comes close to the dexterity of the human hand - and won't for decades.

Still, that doesn't mean there won't be some labor force disruption. About 6.2 million people work as hand laborers and material movers, the U.S. Bureau of Labor Statistics category that most closely matches warehouse work. They make just less than $15 an hour, and even with automation jobs in the industry are expected to increase 7% from 2020 to 2030, which is as fast as average, the bureau says.

Companies were forced to think during the pandemic about which work can be done remotely and which must be done in person, McKinsey & Co. said in a study last year. Automation will accelerate for the U.S. food service and customer service sectors and cause those jobs to decline by 4.3 million, the report said.

Jobs, though, will expand for health-care providers, technicians and managers, the study notes. That will require people to raise their skill levels for these new positions as the lower-wage work is eliminated. "More than half of displaced low-wage workers may need to shift to occupations in higher wage brackets and requiring different skills to remain employed," the study said.

On the warehouse floor, some of the most tedious jobs, such as packing items in a box or walking miles each day to fetch goods off a shelf, can be performed by an array of different robots. Companies gain efficiencies from automation and often can reduce the size of their warehouse operations because goods are processed and moved through more quickly. And with robots, warehouses are becoming safer as ailments from lifting and repetitive motion are reduced, Wilson said. GXO has a better track record for retaining workers at the automated facilities compared with those that aren't.

Frontline employees' attitudes toward robots shifted as well during the pandemic, especially in warehouses and factories where labor shortages were acute and workers were being asked to pull extra shifts to keep up despite the risks of catching Covid-19. During the pandemic, the machines weren't replacing humans so much as coming to the rescue. That's because the machines are the most cost effective for mind-numbingly repetitive tasks or jobs where heavy lifting can wear out someone's back in a hurry. That's the low-hanging fruit for automation. Technology has also enabled companies to insert robots safely alongside humans, who are increasingly viewing them more as assistants than something menacingly dangerous and isolated behind a cage, as most robots were more than a decade ago.

This current robotics revolution couldn't have happened earlier because the technology wasn't ready. Just in the last decade, the industry began to make robots that stop their action when approached by a worker, thereby liberating many of these machines from their cages that keep humans away from the powerful steel arms that move at deadly speeds. Those large robots isolated from humans are still the case in heavy manufacturing such as auto factories, where big robots can easily whirl around a half-made vehicle.A little more than five years ago, autonomous mobile robots arrived on the scene in a big way and revolutionized warehouses. Now, trays and bins are brought to people instead of the other way around. With cameras that allow machines to "see" and end-of-arm tools that can now grab almost any item, robots are able to pick and pack specific items. Machine-learning software helps them improve on these abilities and share that knowledge instantly with other robots with just a software update.

Throughout history, machines have eased the physical burdens of labor and have increased the worker productivity that allows wages to rise without sparking inflation. It's a bit counterintuitive, but these machines have also paved the way for increased overall employment, although automation certainly can directly eliminate specific jobs. Think of the steam shovel that replaced dozens of workers with hand tools. Hoover Dam wouldn't have been possible to build with just shovels and picks for digging and wheelbarrows for pouring concrete. That said, it's crucial that workers participate in the productivity gains through higher wages and that displaced ones are given new opportunities. The robot revolution is coming, though, and industry will be better for it.

This column does not necessarily reflect the opinion of the editorial board or Bloomberg LP and its owners. Thomas Black is a Bloomberg Opinion columnist covering logistics and manufacturing.