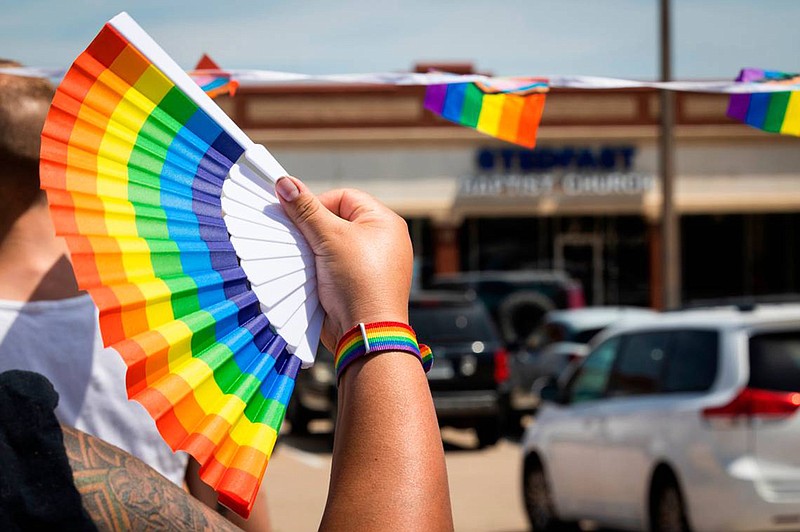 A No Hate in Texas protester holds up a fan while protesting Stedfast Baptist Church in July 2022 in Watauga, Texas. (Yffy Yossifor/Fort Worth Star-Telegram/TNS)

DALLAS -- A Texas church that has repeatedly called for the execution of gay people will not be evicted from its building.

Stedfast Baptist Church in Watauga reached an agreement with its landlord ahead of an eviction hearing scheduled for Wednesday morning in Tarrant County.

Stedfast has spurred numerous protests and complaints after its leaders promoted violence against gay people.

The congregation moved to a strip mall in Watauga this year after it was evicted from its home in Hurst in February for violating the terms of its lease, which prohibits violence and threats.

Even then, Stedfast refused to back down. In June, pastor Dillon Awes said gay people should be executed.

Head pastor Jonathan Shelley has defended the church's position, saying it is only following the Bible's teachings.

Stedfast, which is classified as a hate group by the Southern Poverty Law Center, has made news for its anti-gay rhetoric in the past.

In 2016, its former pastor Donnie Romero praised the 2016 shooting at a gay nightclub in Orlando and condemned the victims.

Three years later, Romero was ousted after admitting he had slept with prostitutes, gambled and smoked marijuana.