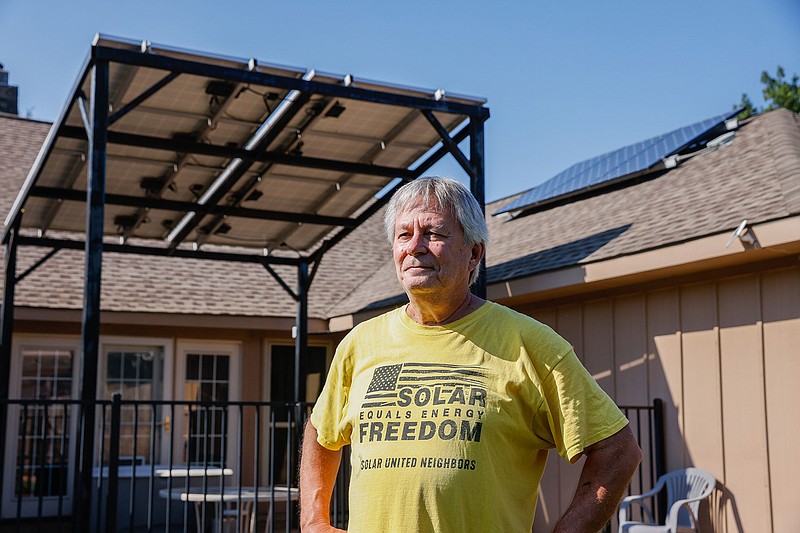 Larry Howe, co-founder of Plano Solar Advocates, installed solar panels on his roof and over his backyard porch. He said the panels provide about 60% of his yearly electricity. (Lola Gomez/Dallas Morning News/TNS)

A decade ago, Larry Howe was drawn to solar energy and became an early adopter. He put solar panels on the roof of his Plano, Texas, home in 2012 and, a few years later, added solar panels above his backyard patio to provide shade and power.

"We use the most air conditioning in the summer when the sun is shining," he said. "So I thought: 'Why not take advantage of generating some of that electricity right when I need it?'"

Similar ideas have won over millions of homeowners across the country.

More growth lies ahead. Last month, Congress approved a climate law that increases the tax credit on rooftop solar to 30% and remains in place for a decade. Texas' residential solar capacity will grow five-fold by 2027, in part because of the tax break, the solar energy association said.

Many homeowners choose solar because of concerns about climate change and extreme weather. They want to reduce their carbon footprint and embrace clean energy.

Others want to cut their electric bills, and solar's cost-benefit proposition has never been better. Electricity rates surged in the past year while the cost of solar panels has fallen sharply over the past decade. That combination shortens the payback period from investing in solar.

Texans have additional reasons to consider solar. After a 2021 winter storm shut down the grid for days and killed hundreds, some want to become more self-reliant and lighten the load on the grid.

When Howe first added solar panels, he knew just about every house that had them in his neighborhood.

"Now, every time I drive around Plano, I think: 'I don't remember that one,'" he said. "They've become almost commonplace, and that's a great thing."

Howe, who co-founded the volunteer group Plano Solar Advocates, has been tracking the number of rooftop installations statewide since 2014. He includes businesses, such as big-box stores, but residential homes account for the vast majority.

Texas had over 160,000 rooftop solar projects in the fourth quarter of last year -- more than double the number in 2019, according to data from Howe and the Texas Solar Energy Society.

Utility-scale solar, created by power providers in Texas' deregulated market, accounts for the vast majority of solar generation here. Texas ranks low among states for the share of solar from residential, a metric that shows much room for growth.

The average value of solar panel shipments -- a proxy for price used by the government -- dropped nearly 83% from 2010 to 2021. That included an 11% decline last year despite supply chain constraints and higher material costs, the agency said.

Howe said he spent about $10,000 in out-of-pocket costs for his system, which totals 4.5 kilowatts. It generates about 60% of his electricity use annually and saves him roughly $100 a month on his electric bill.

In general, he said, homeowners can recoup their upfront solar investments in about 10 years. His payback period will be closer to 12 to 14 years because the cost was higher a decade ago and electricity rates were lower.

Howe helped create early solar co-ops that brought together local residents and leveraged their buying power for rooftop projects, and that approach continues. On Tuesday, the 2022 version of the Plano solar co-op was launched with the help of the nonprofit Solar United Neighbors.

"A lot of our work is to bring people together around their shared interests in learning about solar and the costs of installation," said Hanna Mitchell, director of the group's Texas program. "The co-ops are a large portion of that."

By Wednesday, 30 people had signed on to learn more about solar panels and discounts from bulk buying. The goal is to attract 150 members by the end of November.

The co-op's webpage is at solarunitedneighbors.org/plano, and information sessions are offered on Sept. 22 and Sept. 29.

Members will exchange information and evaluate vendors, eventually selecting a contractor to do installations for the group. In Plano, the average solar panel array is 8 kilowatts, capable of generating about 12,000 kilowatt hours of electricity a year, Mitchell said.

The average cost is about $20,000, including the co-op discount and before the federal tax credit. Co-op members typically get a discount of 10% to 20%, Mitchell said, and they're under no obligation to buy panels or use the selected vendor.

"It's a great way to inform yourself about solar, and the vendors have to be really transparent," said Raul Lozano, a Plano homeowner since 2015. "And you're probably going to get the best deal."

Lozano was a member of last year's Plano solar co-op, and he bought a 17-kilowatt system, much larger than average, for his 2,700-square-foot house. He said he paid about $32,000 before the tax credit, and has been generating about 88% of his electricity in 2022.

"It's over-performing," Lozano said. "In some months, I wasn't paying anything."

That isn't necessarily ideal because the value of excess generation is limited in Texas. The state does not require net metering, which pays homeowners the full cost of electricity when they pump excess power into the grid.

Most states, along with some large municipal utilities in Texas, have net metering policies that reward bigger generators.

While Lozano expects to recover his costs in about eight years, he said he can't take full advantage of his system's size.

"Whatever extra I produce is probably going to my neighbor's home and the retailer is charging them," Lozano said. "But I'm not getting paid."

That leads to some unorthodox approaches to energy use. During the day, when demand is highest and Texas grid operators sometimes ask residents to cut back on power, both Lozano and Howe recharge their electric vehicles and run washers, dryers and dishwashers.

That's because they may be generating more solar power than they're using. And if they wait to charge the EVs at night, they must pay a higher retail rate.

At least 38 states have mandatory net metering rules, according to the Solar Energy Industries Association. Net metering strengthens the financial case for adding panels, but Mitchell said Texas lawmakers don't like the idea.

"There's more support for letting the market take care of it," she said.