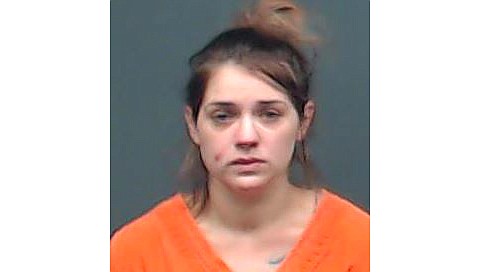 "How did we get here?" Crisp asked the jury during her opening statements. "How did it get this far? She is an actress, an actress of the highest order. The lies and fraud go on and on; the layers of fraud are staggering. You are going to have to understand the fraud to understand what happened on Oct. 9.

"This started months and months ahead of time until it passed the point of no return and it ended up in homicide."

The trial is being held in the 202 District Court in New Boston with Judge John Tidwell presiding.

In speaking to the jury, Crisp said the crime is unprecedented in the county but "overwhelming evidence" would show Hancock was killed by Parker.

"Never before in the history of Bowie County, have we had a pregnant citizen brutally killed and her baby taken in a crude C-section, never until Taylor Parker. It's a crime generally referred to as fetal abduction, and we have never had one here before," Crisp said.

The prosecutor said the jury would hear how Parker carried out a fake pregnancy for 10 months and the steps she would take to keep the lie going. One hoax involved calling in a bomb threat to the Titus County hospital so her scheduled induction would not take place, Crisp alleged.

Crisp said the perception is that Parker killed Hancock because she wanted a baby.

"That's not so. Taylor Parker didn't want anymore children. She killed Reagan and ripped her baby out to keep her boyfriend," said Crisp, alleging that Parker had ordered a fake belly off the internet, faked ultrasounds and even chosen a name for the child -- Clancy Gail.

After the killing, Crisp said, Parker "stuffed Reagan's placenta down her pants to make it look like she had given birth on side of road."

Crisp told the jury they would see and hear disturbing reports of the crime scene, which was left "looking like a slaughter house."

Hancock's mother, Jessie Brooks, discovered her daughter's body after Hancock's husband could not reach her that morning.

"He said he had a bad feeling and asked her to check on Reagan," Crisp said.

"When Reagan was rolled over, she was cut from hip to hip, and the baby had been pulled out," the prosecutor said.

Hancock's 3-year-old daughter reportedly was hiding in her bedroom when family arrived at the house.

In opening statements for the defense, Harrelson asked the jury for its full attention and to weigh all of the evidence.

"It's a complicated case, factually and emotionally," he said.

"The law is the lens and filter you must view these facts through. Sometimes its not black and white but a shade of gray.

Dr. Chris Mason, an obstetrician and gynecologist in Mount Pleasant, Texas testified that Parker gave birth to two children, a daughter in 2010 and a son in 2103. She requested a sterilization after the birth of her second child. He also testified she later had an ectopic pregnancy

"Any kind of permanent sterilization has a failure risk," he said.

During surgery after her ectopic pregnancy in 2014, doctors found Parker also had a benign cyst and scarring from endometriosis. She underwent a hysterectomy at that time, Mason testified.

Defense attorney Cobb questioned Mason on whether a pregnancy after a sterilization would be something a patient found traumatic or something that would cause depression or an extreme reaction.

Mason said some patients are upset but he is not a psychiatrist and could not comment on depression.

Hunter Parker said Taylor talked to him about hiring a surrogate and that money would come from her inheritance. At one time, he testified, someone was supposed to bring them the money, but it supposedly was stolen by EMTs after the man had a car accident.

Hunter Parker said when Taylor Parker was confronted about lying, she would become angry and "would bury herself in more lies."

Harrelson and Cobb questioned if Hunter Parker told anyone he knew Taylor Parker could not bear children after she started telling people she and boyfriend were having a baby together.

Hunter Parker told the defense he never spoke to the boyfriend personally but that he spoke to the brother about how Taylor Parker could not be pregnant.

Mackenzie Bright, whose husband Cody Bright was friends with Hunter Parker, became close friends with Taylor Parker. She testified she believed Parker when she told her she had miscarried twins. Bright was also pregnant at the time.

Parker also told Bright she had Stage 4 uterine cancer and that was why she had a hysterectomy.

"She told me she was eaten up with cancer," Bright testified under questioning by Crisp.

"She could make everything so believable. She played to my weakness," Bright said. "She knew I had trouble conceiving and would believe a miscarriage story."

Bright also testified that Parker had discussed the possibility of Bright serving as her surrogate after Bright's daughter was born. Parker offered to pay her $100,000 allegedly inherited from her grandfather, Bright testified.

Abby Bell, Mackenzie Bright's sister-in-law, also testified that Parker talked to her about being a surrogate. Bell said when she saw photos of Parker's alleged pregnancy in 2020, she knew Parker could not be pregnant.

"She was a liar and was manipulating people to think she was pregnant," Bell said under questioning by Crisp.

She said the longer she knew Parker, the more the lies seemed to escalate.

Bell said she commented on the photo asking Parker how many weeks pregnant she was, even though she knew Parker could not be pregnant. She also testified that a message she sent Parker two days before Reagan Hancock's death was never returned.

The defense questioned both Bright and Bell on how long they knew of the alleged pregnancy hoax.

Under questioning by the prosecution, MiCayla Curtis said Parker told her she had a hysterectomy due to cancer that was discovered when she had a stillborn baby. Parker later said she was pregnant with twins and that it was a medical miracle that doctors would study, Curtis testified.

Curtis also testified that while Parker told coworkers she was five to six weeks pregnant, the ultrasound photo showed babies that were between 11 and 12 weeks.

A Texas state trooper pulled Parker over in DeKalb, Texas, not far from the Oklahoma border, just after 9:30 a.m. the morning of Oct. 9, 2020, according to a probable cause affidavit. Parker allegedly was performing CPR on the infant girl in her lap and the umbilical cord appeared to be coming from her pants.

An ambulance took Parker and the baby to McCurtain Memorial Hospital in Idabel, Oklahoma, where the baby was pronounced dead and doctors determined Parker had not given birth.