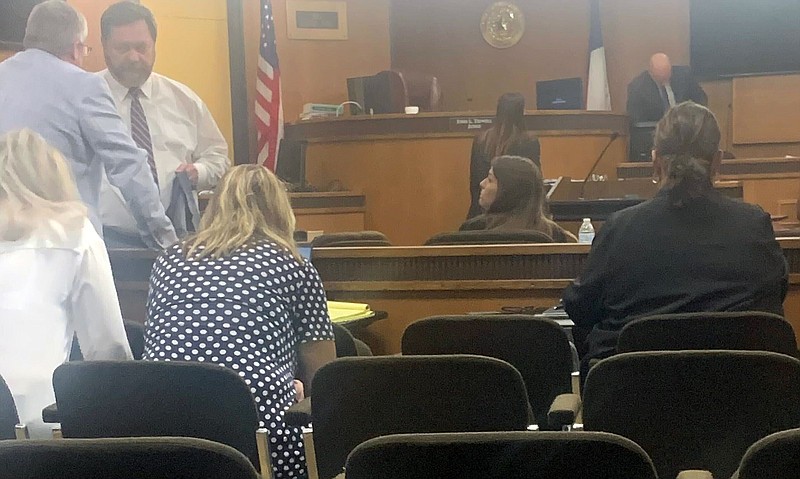 Taylor Parker, center, listens to her attorney Jeff Harrelson, third from left, during a break in her capital murder trial Tuesday, Sept. 13, 2022, at the Bowie County Courthouse in New Boston, Texas. Parker is charged with capital murder and could face the death penalty in the Oct. 9, 2020, killing of expectant mother Reagan Simmons Hancock of New Boston and the taking of her unborn child, who also died. Parker has pleaded not guilty. (Staff photo by Lori Dunn)

In the second day of testimony in Parker's trial, Special Agent Dustin Estes testified one video that Parker watched on the morning of Oct. 9, 2020, was on the physical exam of a 35-week late pre-term infant. Hancock was 35 weeks pregnant when she died and her baby taken from her womb, according to investigators.

The trial is being held in the 202nd District Court in New Boston with Judge John Tidwell presiding.

Another video Parker watched on the morning of Oct. 9, 2020, was about an infant's development at 35 weeks gestation, according to investigators.

"She watched all these videos, clicked on all these links, and they were all at 35 weeks," Assistant Bowie County Prosecutor Kelley Crisp said.

Parker conducted numerous Google searches related to pregnancy between the dates of May 25 and Oct. 9, 2020, Estes testified.

Harrelson questioned Estes on how he knew Parker's intentions watching the videos.

"You can see somebody looked them up, but you don't know why. You can have a theory," Harrelson said.

On Aug. 23, 2020, Parker allegedly conducted an online search for how to adopt a newborn baby, Estes testified.

Sept. 16, 2020, was a "significant date" based on the type of searches Parker conducted, Estes said. Crisp questioned Estes about the significance of these searches to investigators.

"She searched for places where pregnant women might be," Estes said. "Consignment shops, maternity stores and OBGYN clinics," Estes testified. He also testified that on those dates, searches focused on videos about performing Cesarean sections and vaginal birth deliveries. Some of the videos were on how to deliver and inspect placentae.

Parker's Google activity between Oct. 7 and 9 included a search for Hancock's address on Austin Street in New Boston, Estes testified.

Crisp asked Estes what his opinion was based on Parker's online search history.

"My opinion is Taylor Parker faked her pregnancy. ... She planned and carried out the murder of Reagan," Estes said.

Harrelson questioned Estes about how people often only put positive things on social media. He also questioned him on ways to access Facebook Messenger and the reasons the search feature is used.

"Just because someone searched for someone on Facebook, it does not mean there are nefarious means, does it?" he asked.

Estes replied that based on the evidence, he did believe that was the reason Parker searched for Hancock.

Social media posts from Aug. 25 were of a maternity shoot for Parker, according to investigators.

Searches from July 2020 included Parker's viewing and purchase of a fake pregnant stomach from the website fakeababy.com.

A social media post from July asked for prayers for Parker and baby "Clancy Gail" because she had medical appointments and scans that day.

Gerald Brown, a digital forensics investigator with the Texas Rangers division of the Texas DPS, testified Tuesday about the three cellphones and a laptop computer allegedly belonging to Parker that he extracted data from. Assistant District Attorney Lauren Richards questioned Brown.

Brown testified that Parker used "spoof" phone numbers with the names of her grandmother and her aunt to create text threads of fake conversations.

Many of the "conversations" involved Parker talking about her problems with her boyfriend's family.

"The conversations on both end are like a diary," Richards said.

Brown also testified about a "burner phone" allegedly used by Parker that went into service on Oct. 8. Calls were made on the morning of Oct. 9 to the McCurtain Hospital in Idabel, Oklahoma. Reagan Hancock also received calls and texts from the burner phone between 7:22 a.m. and 7:52 a.m. on Oct. 9, Brown testified.

Sgt. Cody Sartor with the Texas Office of the Attorney General testified as an expert witness. From 2015 to July of this year, Sartor worked for the Cass County Sheriff's Office as an investigator and is trained in phone extraction.

A Texas state trooper pulled Parker over in DeKalb, Texas, not far from the Oklahoma border, just after 9:30 a.m. the morning of Oct. 9, 2020, according to a probable cause affidavit. Parker allegedly was performing CPR on the infant girl in her lap, and the umbilical cord appeared to be coming from her pants.

An ambulance took Parker and the baby to McCurtain Memorial Hospital in Idabel, where the baby was pronounced dead and doctors determined Parker had not given birth.

Testimony continues at 9 a.m. Wednesday at the Bowie County Courthouse.