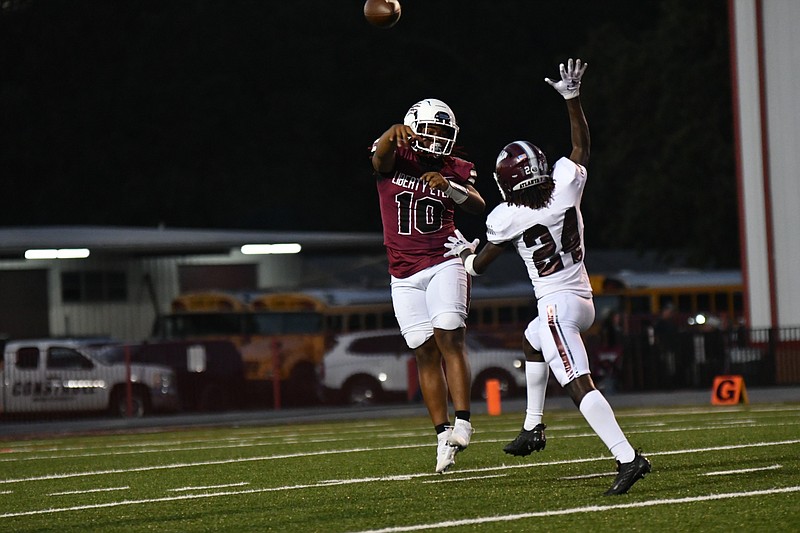 After falling behind Atlanta on their first possession, L-E rallied and then held on to defeat the Rabbits, 16-14, at Harris Field Friday evening.

The Leopards remain undefeated at 4-0, while Atlanta falls to 3-1 on the season.

This was the 19th meeting between the schools with L-E holding a 14-5 advantage.

Atlanta got a big break on the opening kickoff when L-E fumbled and the Rabbits took over at the Leopards' 30-yard line.

Six plays later, Stacy Darty scored on a 3-yard run and the extra point made it 7-0.

L-E then marched downfield from its 44-yard line to the Rabbits 7.

Three straight penalties pushed the Leopards back to the 25.

On third down, Jaydin Hampton's pass was intercepted on the 1-yard line by Dimoree Limbrick.

Near the end of the first half, Atlanta took over at its 6-yard line. Instead of just trying to run out the clock with two runs, Peyton Harrison fell down in the end zone for a two-point safety.

After the safety, L-E took over in the final minute at the Rabbits' 47-yard line, and quickly scored on a 16-yard pass from Hampton to Dequane Prevo with just two seconds left for an 8-7 lead at halftime.

It didn't take long for the Leopards to score in the second half when W.T. Jones intercepted a pass and went 25 yards for the score. Greg London ran for the two-point conversion and a 16-7 advantage.

Early in the fourth quarter, Atlanta drove down to the Leopards' 4-yard line, but an 11-yard loss pushed them back to the 15.

A screen pass from Harrison to Kameron Dickerson resulted in a 66-yard scoring play to bring the score to 16-14 with 3:53 left in the game.

L-E again fumbled a kickoff, and Atlanta returned the miscue to the 15-yard line.

The L-E defense held, and another Atlanta field attempt failed, and L-E held on for the victory.

Liberty-Eylau relied on short passes for most of the game with Hampton completing 17 of 26 passes for 105 yards.

Greg London was the leading rusher for L-E with 58 yards on 12 attempts.

With the help of the 66-yard touchdown toss, Harrison completed five passes for 106 yards. 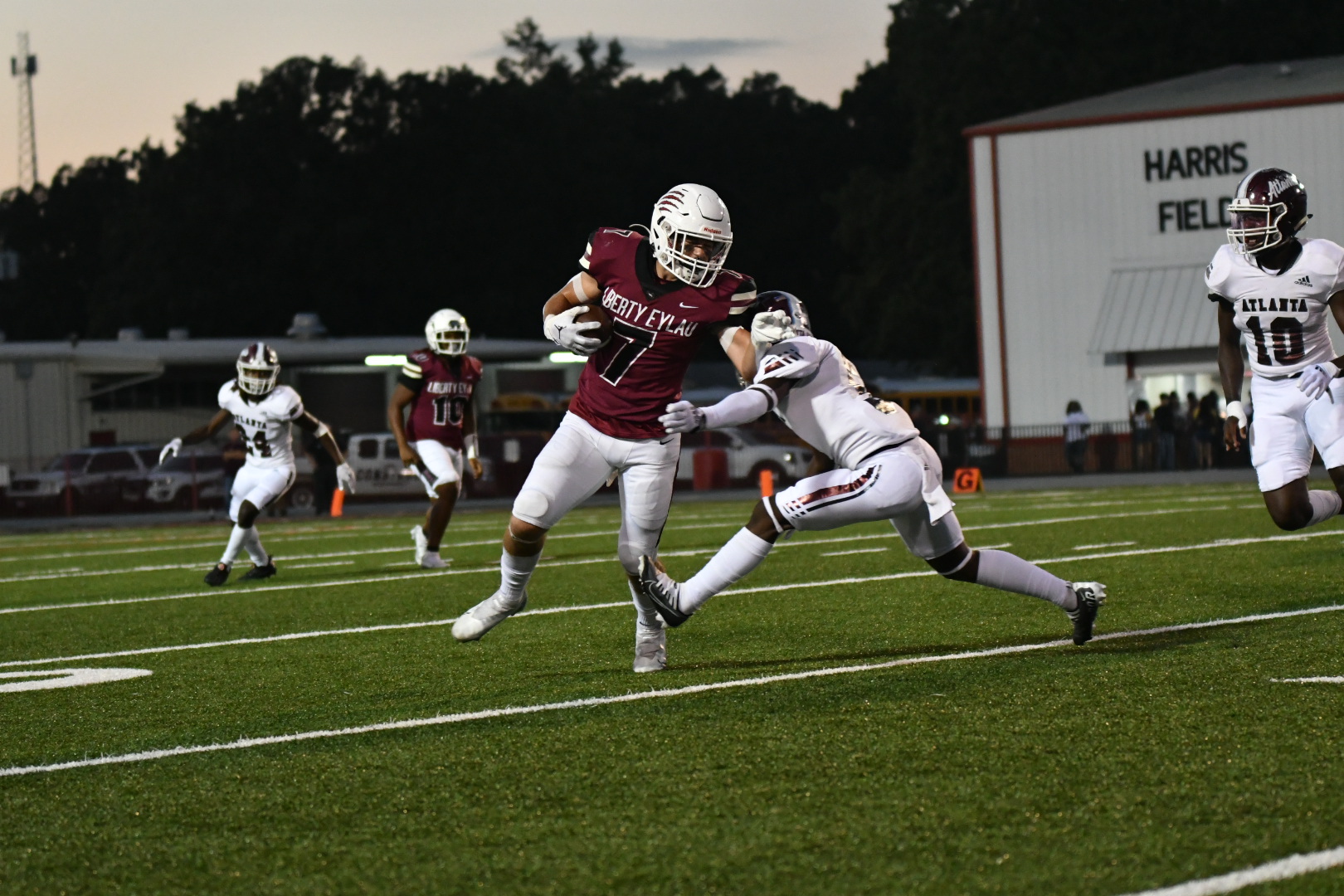 Liberty-Eylau fullback W.T. Jones attempts to get around an Atlanta defender on Friday, Sept. 17, 2022, at Harris Field in Texarkana, Texas. (Photo by Kevin Sutton) 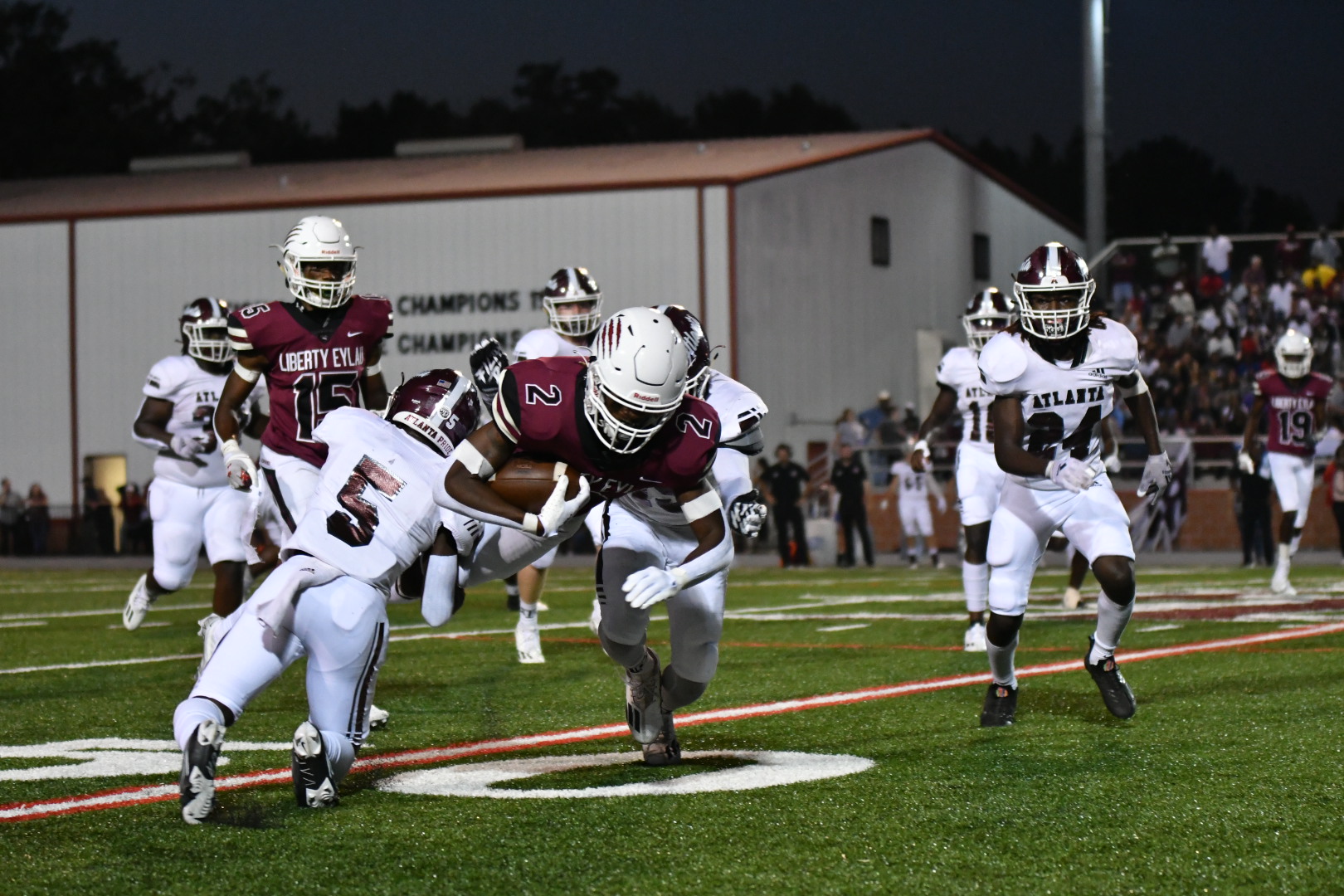