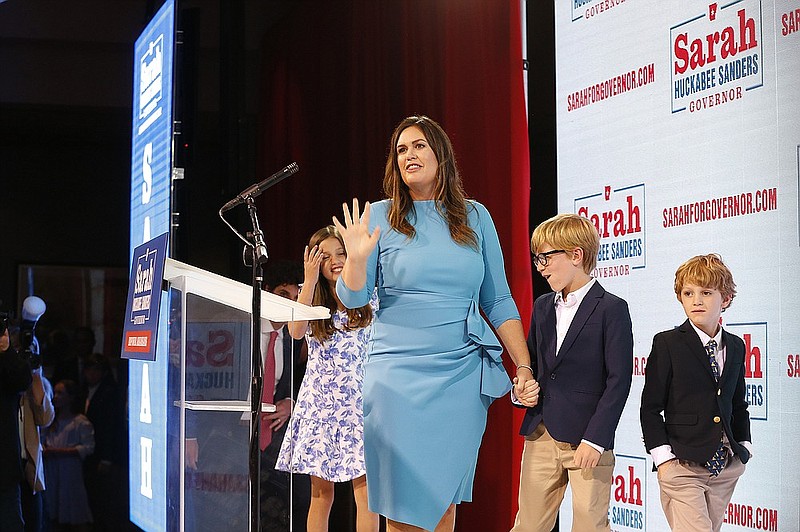 Gubernatorial candidate Sarah Huckabee Sanders takes the stage with family as she is greeted by supporters as she enters the room to accept the Republican nomination for governor on Tuesday, May 24, 2022, at the Embassy Suites Little Rock. (Arkansas Democrat-Gazette/Thomas Metthe)

Sanders announced she underwent the surgery after a biopsy earlier this month revealed that she had thyroid cancer.

"Today, I underwent a successful surgery to remove my thyroid and surrounding lymph nodes and by the grace of God I am now cancer-free," Sanders said in a statement released by her campaign. "I want to thank the Arkansas doctors and nurses for their world-class care, as well as my family and friends for their love, prayers, and support."

Sanders said she looked forward to returning to the campaign trail soon.

Sanders, who served as former President Donald Trump's spokeswoman until 2019, is running against Democratic nominee Chris Jones. She is the daughter of former Gov. Mike Huckabee.

A doctor for Sanders said in a statement that he expected her to be back on her feet within the next 24 hours. Dr. John R. Sims said Sanders will need adjuvant treatment with radioactive iodine and continued long follow up care.

"I think it's fair to say she's now cancer free, and I don't anticipate any of this slowing her down," Sims said.