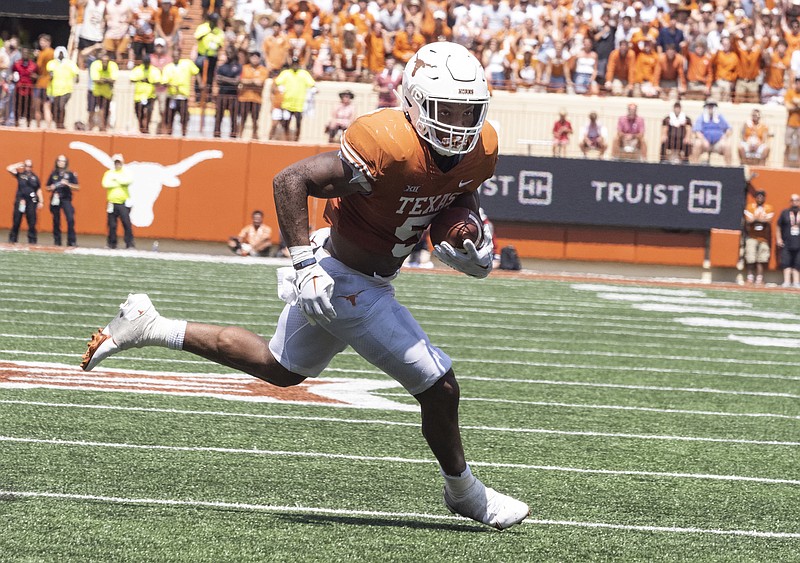 "To quote my old boss, 'We gotta be careful of the rat poison of people telling us how good we are," Sarkisian said.

That may be easier said than done for a Texas (1-1) program being lauded nationally for a tough loss to then-No. 1 Alabama, but is now facing a rising UTSA (1-1) team out for the biggest win in program history. Last season's C-USA champions are led by head coach Jeff Traylor, a former Texas assistant.

Texas was unranked and disrespected after last season's 5-7 finish. Yet the Longhorns (1-1) quickly jumped to No. 21 after last week's 20-19 loss to Alabama. Sticking close to 'Bama as three-touchdown underdogs created a lot of buzz that once-powerful Texas may indeed be on the rise again.

Hence, the warnings about "rat poison" scattered around campus.

"A week ago, everyone told us how bad we were, now this week everyone wants to tells us how good we are," Sarkisian said. "We have to be careful to quiet the noise outside of our building."

In 2016, Texas followed two straight losing seasons with a pulsating, national television win over Notre Dame. The "Texas is back!" game became a punchline as the Longhorns finished 5-7 and coach Charlie Strong was fired.

In 2018, Texas won 10 games and whipped Georgia in the Sugar Bowl as quarterback Sam Ehlinger declared in postgame, "We're baaa-aack!" Texas finished third in the Big 12 the next two seasons and coach Tom Herman was fired.

And just last season, Sarkisian's Longhorns were blowing out Oklahoma 28-7 after one quarter. Those 15-minutes of near perfect football had everyone's attention. Texas still lost to start a five-game losing skid, the program's longest in 65 years.

The Longhorns have plenty to worry about, mainly at quarterback. Starter Quinn Ewers injured his clavicle in the first quarter against Alabama and returned to the sideline with his left arm in a sling. Backup Hudson Card finished the game but was visibly limping in the second half. Freshman Charles Wright could get the call.

Sarkisian refused to say this week who would start, although Ewers would seem the least likely option.

The college football landscape saw some big upsets last week. UTSA figures it could pull off another big one.

UTSA didn't start playing football until 2011. The game Saturday will be the 135th in program history. It will be No. 1,349 for Texas. Traylor knows the bounce his team could get from a win.

"I think last weekend was good for all of college football and it gives the Roadrunners hope," Traylor said. "We can play with people."

Sarkisian sparred with reporters this week when pressed on who would start, but he did call the injuries to Ewers and Card "significant."

"You guys can keep poking the bear on what I do at QB. At the end of the day, I'm not going to give you game-planning decisions on how we practice," Sarkisian said.

Ewers likely won't play. If Card limps onto the field, his mobility could be severely limited and his throwing motion could be off if he can't plant his feet. Wright has got some mop-up snaps in a rout of Texas Tech last season but has never been a factor in the quarterback discussion, even when the job was open. Also, Texas could play a lot of Wildcat formation with running back Roschon Johnson taking direct snaps. He's a former quarterback.

UTSA has no questions at quarterback. Frank Harris is averaging 348 yards per game with six touchdowns against just one interception. He'll test a Texas defense that bottled up Alabama's Heisman Trophy winner Bryce Young for most of the game. Roadrunners wide receivers Zakhari Franklin and Joshua Cephus are both averaging more than 110 yards per game.

New Texas Kicker Bert Auburn proved steady under pressure. He was 4-of-5 on field goal attempts against Alabama, including three in the second half. His miss at the end of the first half came after the kick was partially blocked. Punter Daniel Trejo averaged 46 yards and consistently flipped field position.

Auburn was kicking all those field goals because Texas struggled to punch the ball into the end zone. Three drives ended inside the Alabama 10-yard line and another on the 15. "The value of those points are so important, which we kind of learned the hard way. One-for-five in the red area, quite frankly that's the difference in the game," Sarkisian said.

If Texas must rely heavily on its run game, tailback Bijan Robinson could have a big day. Robinson scored Texas' only touchdown against Alabama but otherwise struggled behind a young offensive line. He averaged just 2.7 yards over 21 carries.