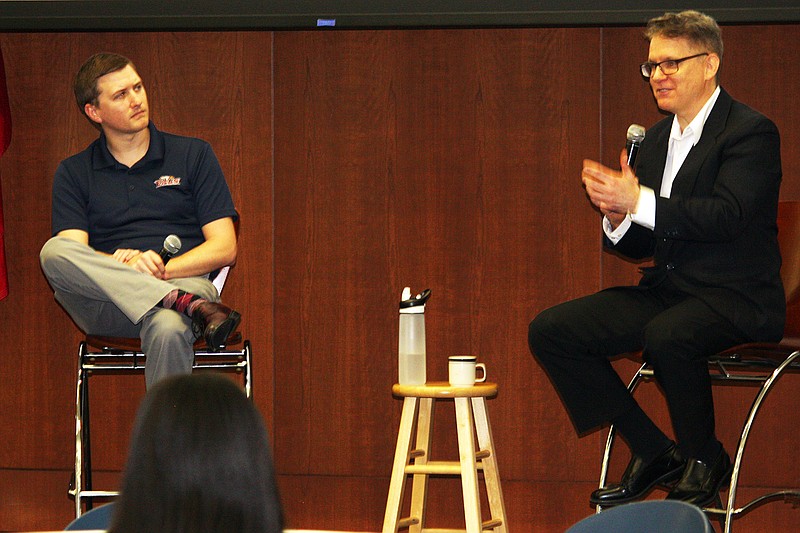 The event was in partnership with the law-oriented greek organization Phi Delta Phi and TAMU-T’s Program for Learning and Community Engagement. Attendees got a free pocket Constitution and pizza.

“We hold this in celebration of Constitution Day, which is a national holiday. It’s officially on Sept. 17, but that’s falling on a weekend so we did it today,” Bugh said.

Student Justin LeGrand asked questions of the lecturers, mainly pertaining to term limits on senators and other government representatives.

“I came because I wanted to learn more about the constitution. I learned that I like the way it laid out the foundation of our country. I also wanted to get a pocket Constitution,” LeGrand said.

According to TAMU-T, Bugh has written about constitutional law and the Supreme Court in peer-reviewed publications. Mintun specializes in international relations and conflict and recently gave an on-campus talk about the Russo-Ukrainian conflict.

The professors spoke of the three branches of government: legislative, judicial and executive; how the Supreme Court justices are appointed and approved to their positions; term limits for senators; and the approaches that the Constitution took in regard to pirates in the 1700s.

Texarkana transplant James Robinson contributed questions to the lecture and said that he wanted to get a better understanding of the U.S. government.

“I’ve always been infatuated with it. I thought it would be highly informative to listen to a new perspective,” Robinson said.