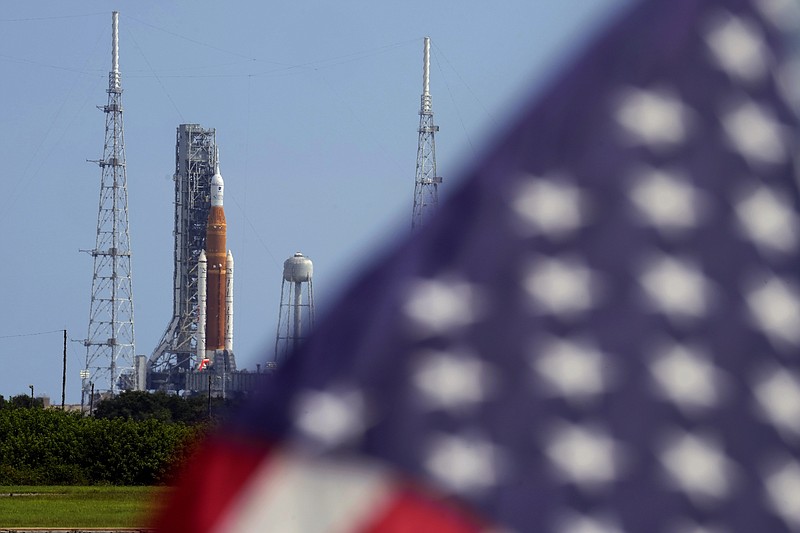 An American flag flies in the breeze as NASA's new moon rocket sits on Launch Pad 39-B after being scrubbed at the Kennedy Space Center on Sept. 3, 2022, in Cape Canaveral, Fla. It’s not just rocket fuel propelling America’s first moonshot after a half-century lull. Rivalry with China’s space program is helping drive NASA’s effort to get back into space in a big way. That's as both nations push to put people back on the moon and establish the first lunar bases. (AP Photo/Chris O'Meara, File)

WASHINGTON -- It's not just rocket fuel propelling America's first moonshot after a half-century lull. Strategic rivalry with China's ambitious space program is helping drive NASA's effort to get back into space in a bigger way, as both nations push to put people back on the moon and establish the first lunar bases.

American intelligence, military and political leaders make clear they see a host of strategic challenges to the U.S. in China's space program, in an echo of the U.S.-Soviet rivalry that prompted the 1960s' race to the moon. That's as China is quickly matching U.S. civil and military space accomplishments and notching new ones of its own.

On the military side, the U.S. and China trade accusations of weaponizing space. Senior U.S. defense officials warn that China and Russia are building capabilities to take out the satellite systems that underpin U.S. intelligence, military communications and early warning networks.

There's also a civilian side to the space race. The U.S. is wary of China taking the lead in space exploration and commercial exploitation, and pioneering the technological and scientific advances that would put China ahead in power in space and in prestige down on Earth.

"In a decade, the United States has gone from the unquestioned leader in space to merely one of two peers in a competition," Sen. Jim Inhofe, an Oklahoma Republican, declared this week at a Senate Armed Services hearing. "Everything our military does relies on space."

At another hearing last year, NASA administrator Bill Nelson brandished an image transmitted by a Chinese rover that had just plunked down on Mars. "The Chinese government ... they're going to be landing humans on the moon" soon, he said. "That should tell us something about our need to get off our duff."

China likewise aims to send astronauts to the moon this decade, as well as establish a robotic research station there. Both the U.S. and China intend to establish bases for intermittent crews on the moon's south pole after that.

Russia has aligned with China's moon program, while 21 nations have joined a U.S.-initiated effort meant to bring guidelines and order to the civil exploration and development of space.

The parallel efforts come 50 years after U.S. astronauts last pulled shut the doors on an Apollo module and blasted away from the moon, in December 1972.

Some space policy experts bat down talk of a new space race, seeing big differences from John F. Kennedy's Cold War drive to outdo the Soviet Union's Sputnik and be the first to get people on the moon. This time, both the U.S. and China see moon programs as a stepping stone in phased programs toward exploring, settling and potentially exploiting the resources and other untapped economic and strategic opportunities offered by the moon, Mars and space at large.

Beyond the gains in technology, science and jobs that accompany space programs, Artemis promoters point to the potential of mining minerals and frozen water on the moon, or using the moon as a base to go prospecting on asteroids -- the Trump administration in particular emphasized the mining prospects. There's potential in tourism and other commercial efforts.

And in a world where China and Russia are collaborating to try to surpass the U.S. in space, and where some point to private space efforts led by U.S. billionaires as rendering costly NASA rocket launches unnecessary, the U.S. would regret leaving the glory and strategic advantages from developing the moon and space solely to the likes of Chinese President Xi Jinping and Tesla magnate Elon Musk, Artemis proponents say.

The moon programs signal that "space is going to be an arena of competition on the prestige front, demonstrating advanced technical expertise and know-how, and then also on the military front as well," said Aaron Bateman, a professor of history and international affairs at George Washington University and a member of the Space Policy Institute.

"People who are supportive of Artemis and people who see it as a tool of competition, they want the United States to be at the table in shaping the future of exploration on other celestial bodies," Bateman said.

There's no shortage of such warnings as the Artemis program moves toward lift-off. "Beijing is working to match or exceed U.S. capabilities in space to gain the military, economic, and prestige benefits that Washington has accrued from space leadership," the U.S. intelligence community warned this year in its annual threat assessment.

A Pentagon-commissioned study group contended last month that "China appears to be on track to surpass the U.S. as the dominant space power by 2045." It called that part of a Chinese plan to promote authoritarianism and communism down here on Earth.

It's sparked occasional heated words between Chinese and U.S. officials.

Flying on the mightiest rocket ever built by NASA, Artemis 1 aims for a five-week demo flight that would put test dummies into lunar orbit.

If all goes well with that, U.S. astronauts could fly around the moon in 2024 and land on it in 2025, culminating a program that will have cost $93 billion over more than a decade of work.

NASA intends that a woman and a person of color will be on the first U.S. crew touching foot on the moon again.

Lessons learned in getting back to the moon will aid in the next step in crewed flights, to Mars, the space agency says.

China's ambitious space program, meanwhile, is a generation behind that of the United States. But its secretive, military-linked program is developing fast and creating distinctive missions that could put Beijing on the leading edge of space flight.

Already, China has that rover on Mars, joining U.S. ones already there. China carved out a first with its landing on the far side of the moon.

A 1967 U.N. space treaty meant to start shaping the guardrails for space exploration bans anyone from claiming sovereignty over a celestial body, putting a military base on it, or putting weapons of mass destruction into space.

"I don't think it's at all by coincidence or happenstance that it is now in this period of what people are claiming is renewed great-power competition that the United States is actually investing the resources to go back," said Bateman, the scholar on space and national security. "Time will tell if this turns into a sustained program."

Does rivalry with the Chinese "ensure greater sustained interest in our space program? Sure," Coons said. "But I don't think that's necessarily a competition that leads to conflict.

"I think it can be a competition -- like the Olympics -- that simply means that each team and each side is going to push higher and faster. And as a result, humanity is likely to benefit," he said. 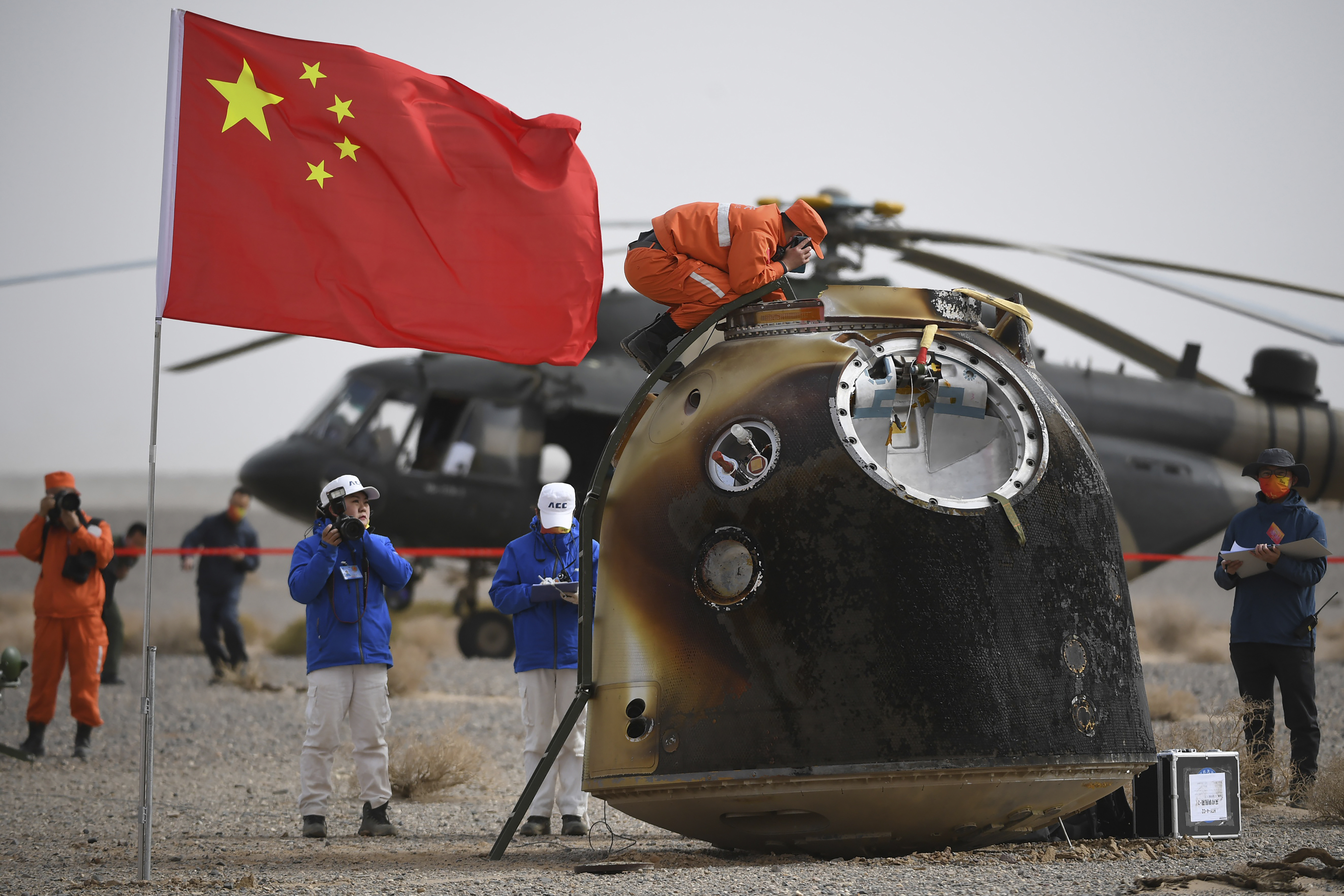 In this photo released by China's Xinhua News Agency, the return capsule of the Shenzhou-13 manned space mission is seen after landing at the Dongfeng landing site April 16, 2022, in northern China's Inner Mongolia Autonomous Region. Three Chinese astronauts returned to Earth after six months aboard China's newest space station in the longest crewed mission to date for its ambitious space program. It’s not just rocket fuel propelling America’s first moonshot after a half-century lull. Rivalry with China’s space program is helping drive NASA’s effort to get back into space in a big way. That's as both nations push to put people back on the moon and establish the first lunar bases. (Peng Yuan/Xinhua via AP, File)