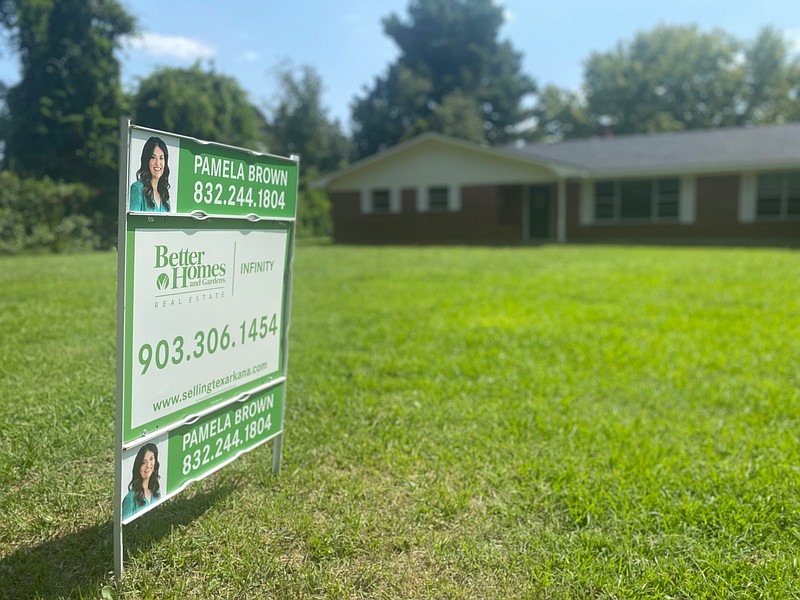 A house listed for sale is pictured on Thursday, Sept. 15, 2022, on Moores Lane in Texarkana, Texas. (Staff photo by Andrew Bell)

TEXARKANA -- Officials from the Texarkana Chamber of Commerce say they don't expect rising mortgage interest rates to have much of a negative impact on the Texarkana housing market.

Average long-term U.S. mortgage interest rates have hit 6% for the first time since the housing crash of 2008.

Mortgage buyer Freddie Mac reported Thursday that the 30-year rate rose to 6.02% from 5.89% last week. The long-term average rate has more than doubled since a year ago and is the highest it's been since November 2008, just after the housing market collapse triggered the Great Recession. One year ago, the rate stood at 2.86%.

Denis Washington, interim president of the Texarkana Chamber of Commerce, said he doesn't think the recent increase will change much for Texarkana homebuyers.

"I really don't think it's going to impact us much," Washington said. "I grew up in an era when interest rates went as high as 21%. I know we've been spoiled the last five or six years with low interest rates, but 6% is really not a bad rate."

Washington, a retired commercial banker, said he would recommend first-time homebuyers to consider a 30-year mortgage over a 15-year one to offset the increase in monthly payments the interest rates would cause.

"So many times, what I would tell first-time homebuyers is to look at doing a 30-year mortgage rather than a 15-year mortgage," he said.

"There's kind of a buffer there. And whether you're paying $900 a month or $1,200 a month, it's still affordable. At the same time, you take away the possibility of having to deal with a landlord that's lax in taking care of maintenance issues."

Camille Powell, program manager of workforce development at the chamber, said the Texarkana housing market is still affordable despite the uptick in rates.

Powell shared that she and her husband recently purchased their first home in Texarkana and the current mortgage rates weren't much of a deterrent for them.

"We got our rate locked in when we pre-qualified for our loan, so we knew exactly how much our rate was going to be. We scaled the amount we were willing to spend on a house down to compensate for the interest rate being at the higher end," she said.

Local experts would agree with Powell and Washington, as of late.

In August, Century 21's Jared Horton told the Texarkana Gazette that housing inventory has increased from where it was earlier this year, causing prices to go down a bit. This has helped offset the rising interest rates, he says.

"Yes, interest rates have gone up, but house prices have leveled off and maybe come down a little bit. The market is shifting right now," Horton said.

A study released by the Texas A&M Real Estate Research Center last month also showed that the Texarkana region ranks highly in overall housing affordability. According to the Texas Housing Affordability Index, Texarkana ranked eighth out of 45 areas in Texas listed on a THAI graph, with an index of just under 1.75.

Washington said he believes the Texarkana housing market is meeting the needs of its citizens, overall.

"It's obviously supply and demand that drives it. But I don't think there's a surplus out there, and I don't think we're underserved either," he said.

Powell said she believes Texarkana has a good variety of homes to select from.

"When my husband and I were looking at houses, I think we noticed that there's a good mixture of larger and smaller homes in Texarkana."