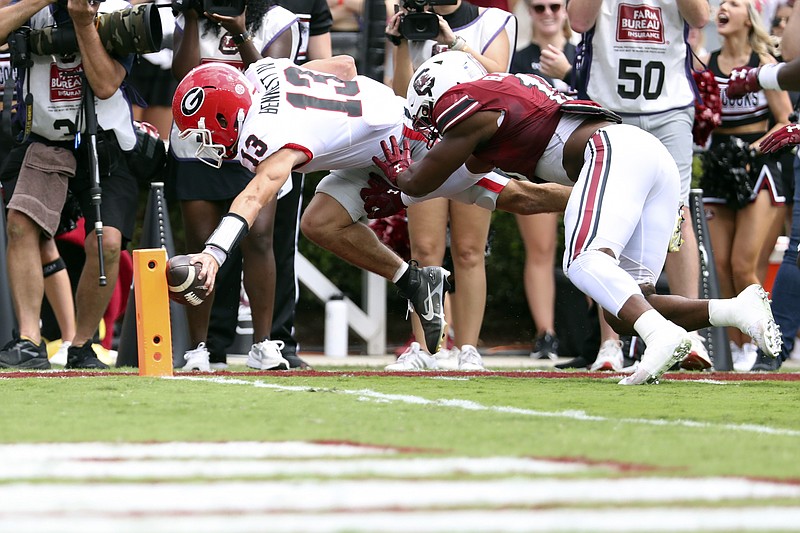 Georgia quarterback Stetson Bennett (13) is pushed out at the one-yard line by South Carolina linebacker Brad Johnson (19) during the first half of an NCAA college football game on Saturday, Sept. 17, 2022 in Columbia, S.C. (AP Photo/Artie Walker Jr.)

COLUMBIA, S.C. -- Georgia coach Kirby Smart and his No. 1 Bulldogs are sending messages to anyone who thought they were going to drop off after a national championship.

The latest statement came Saturday in a 48-7 victory over South Carolina (1-2, 0-2) in their Southeastern Conference opener, where the Gamecocks needed a touchdown with 53 seconds to go to avoid becoming the fifth shutout victim of the Bulldogs (3-0) in their past 14 games.

Meanwhile, the Georgia offense gained 547 yards, scoring on eight of its first nine possessions and was averaging nearly 10 yards a play before the backups came in and took their foot off the gas in the fourth quarter.

Even though 15 players left for the NFL after winning Georgia's first national title since 1980, there still is still plenty of talent and an attitude that winning a championship leaves behind, coach Kirby Smart said.

Stetson Bennett went 16 for 23 for 284 yards and two touchdowns and ran for another score. Just like the Bulldogs' 49-3 victory over Oregon and 33-0 win over Samford, Bennett didn't take a snap in the fourth quarter. He reminded his teammates that it won't stay this easy.

The Bulldogs' defensive line overwhelmed South Carolina's front. A defender was in quarterback Spencer Rattler's face almost every time he dropped back more than three steps. The Oklahoma transfer got off just three deep balls, with two of them intercepted. He didn't play in the fourth quarter and was 13 of 25 for 118 yards.

The 41-point victory was Georgia's biggest against the Gamecocks in their 75 meetings. It was South Carolina's worst loss since a 56-6 defeat to Florida in 2008.

TUSCALOOSA, Ala. -- Bryce Young passed for three touchdowns and rushed for a fourth, Will Anderson Jr. scored on an interception return and No. 2 Alabama rolled to a 63-7 victory over Louisiana-Monroe.

The Crimson Tide scored on offense, defense and special teams in the first six minutes and raced to a 28-0 first-quarter lead.

It was a whirlwind start against the 49.5-point underdog Warhawks a week after a much closer-than-expected win over Texas cost Alabama the No. 1 ranking. Young did throw his first two interceptions of the season.

LEXINGTON, Ky. -- Will Levis accounted for three touchdowns, Kavosiey Smoke ran for a score and No. 9 Kentucky shook off a slow start to shut out Youngstown State 31-0 on Saturday.

Ranked in the top 10 ranking for the first time since October 2007, the Wildcats followed up last week's SEC win at Florida by physically dominating the FCS Penguins.

ATLANTA -- No. 20 Ole Miss shrugged off its uncertainty at quarterback by running right through Georgia Tech to improve to 3-0 on the season.

Zach Evans and Quinshon Judkins led the way as the Rebels rushed for 316 yards in a 42-0 pummeling. Jaxson Dart returned as the starting quarterback, but it didn't really matter who was taking the snaps.

AUBURN, Ala. -- Nicholas Singleton and Kaytron Allen combined for 176 rushing yards and four touchdowns as No. 22 Penn State cruised to a 41-12 win at Auburn.

The Nittany Lions' freshman running backs were instrumental in the red zone.

Penn State scored touchdowns on each of its first four trips inside the 20-yard line.

Tigers star running back Tank Bigsby rushed for only 39 yards.

Penn State led by one point late in the second quarter before Allen scored his first of two touchdowns.

Quarterback Brady Cook and Dominic Lovett connected on a 79-yard touchdown pass in the first half that helped Missouri build a 17-3 halftime lead. Lovett posted career highs with seven catches for 132 yards and two scores.

The Wildcats scored their only touchdown thanks to a Missouri turnover.

On first down from the Tigers 9-yard line in the third quarter, David Oke stripped the ball from Cook and Alexander Duke recovered the ball in the end zone, pulling the Wildcats within 24-10.

Swann, making his third appearance and first career start, engineered a comeback from a two-touchdown deficit as the Commodores scored 24 unanswered points in the second half. He completed 18 of 28 passes for 255 yards and the four scores.

Northern Illinois suffered its second straight loss as starting quarterback Rocky Lombardi left the game in the second quarter with an unspecified injury.

Swann rallied the Commodores with three of his touchdown passes, the first a 21-yarder to Ray Davis on a fourth-down play.