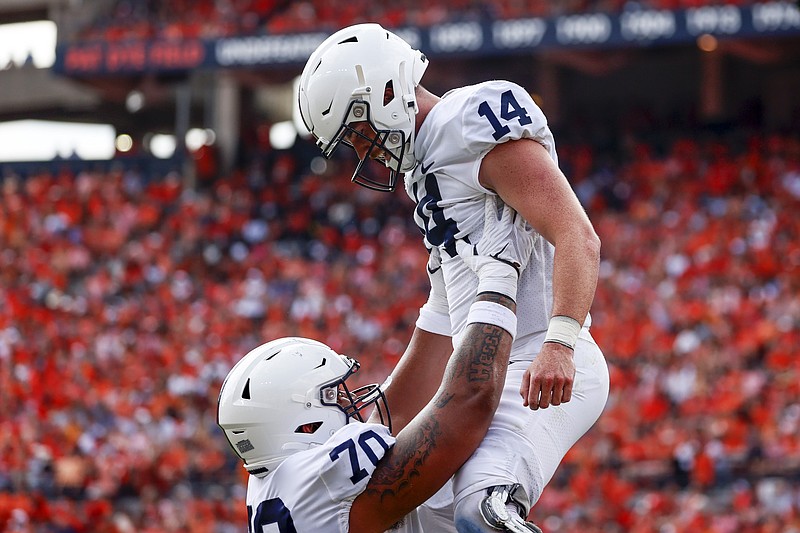 Penn State offensive lineman Juice Scruggs (70) celebrates with Penn State quarterback Sean Clifford (14) after he scored a touchdown against Auburn during the first half of an NCAA college football game, Saturday, Sept. 17, 2022, in Auburn, Ala. (AP Photo/Butch Dill)

Being a good, but definitely not great, quarterback can be a rough ride in college football.

This is the life that Penn State's Sean Clifford and Oregon's Bo Nix have led, and on Saturday, the veteran quarterbacks proved their worth.

Clifford, in his sixth year with Penn State, deftly guided the 22nd-ranked Nittany Lions through hostile territory and to one of their most impressive nonconference victories in years. Clifford took a lick early from Auburn, popped back up and sent Tigers fans home early from Jordan-Hare Stadium. Clifford was 14 for 19 for 178 yards, a rushing touchdown and nary a turnover.

The future at Penn State is five-star freshman Drew Allar. The future looks bright and some Nittany Lions fan are in a rush to get there. But for now, Clifford's the man for Penn State coach James Franklin, who appears to have surrounded the 24-year-old with the best set of weapons the team has had in in several years.

Freshman running backs Nick Singleton and Kaytron Allen (who combined 174 yards and four touchdowns) have resuscitated a Penn State running game that has been dormant for two years.

"The ability to be more balanced and take pressure off the passing game has been really important for us," Franklin said.

Add some talented pass-catchers, and Clifford can be both game-manager and playmaker.

The record says Penn State is in the same place it was last year after three games: 3-0, with a close road win to open the Big Ten season and victory against Auburn. An injury to Clifford halfway through the Iowa game last year sent Penn State into a spiral. This team feels different.

Meanwhile, Auburn went through two quarterbacks who combined for four giveaways that buried the Tigers. Who knew how much Auburn would miss Nix?

The five-star recruit who started most of the Tigers' games the last three seasons had plenty of highs and lows on The Plains, a mix of the memorable and regrettable.

He jumped into the portal after last season and landed at Oregon. Good choice.

Two weeks removed from being embarrassed by top-ranked Georgia, the 25th-ranked Ducks looked very much like the Pac-12 contender they were expected to be in a decisive victory against BYU.

Nix threw two touchdown passes and ran for three scores against the Cougars. The last Oregon quarterback to do that: Heisman winner Marcus Mariota in 2014.

"One of my past coaches told me that pressure is a privilege, and so I've really taken that to heart, and there's nothing more true in my opinion," Nix said. "When you have a lot of pressure it means that people believe in you, people believe you can do it, or you wouldn't have pressure at all."

The Ducks were so badly outclassed by Georgia in Atlanta on Labor Day weekend it was tempting to wonder whether new coach Dan Lanning and his staff might be in over their heads. And there were plenty of Ducks fans wondering if Nix was really the best they could do a quarterback with former blue-chipper Ty Thompson on the bench.

Neither Clifford nor Nix are going to be players the draftniks debate after the season. And there will likely be moments this season when their fans still long for the next big thing.

But they were more than good enough Saturday.

Now that Nebraska has moved on from Scott Frost, the question is who's the next coach to be fired.

Auburn's Bryan Harsin has seemed like a short-timer since last winter, when Auburn decided to fish for a reason to fire him after just one season. The coup didn't work, but it has been apparent that Harsin has little support.

If there was a path to surprisingly successful season that saved Harsin's job, that's probably gone now. Auburn next dives into Southeastern Conference play: Can Harsin survive back-to-back road games against No. 1 Georgia and No. 20 Mississippi in mid-October?

Collins is in Year 4 of a rebuild that figured to be tricky after the Yellow Jackets ran the option under Paul Johnson, but has completely failed to launch.

Georgia Tech is probably not the type of school that's going to pull the plug this early. At this rate, though, it's going to be tough to play out this season. Georgia Tech has UCF next week, No. 23 Pitt after that.

Appalachian State is the team of the year. Must-see TV. This week: The Mountaineer Miracle ... The first game for Nebraska post-Frost could not have gone much worse. No. 6 Oklahoma scored more points in Lincoln than it ever has in a rivalry that dates back more than a century. ... After 179 minutes of football this season, No. 1 Georgia permitted its first touchdown. Brock Bowers and the Bulldogs crushed South Carolina and have looked terrifying through three weeks. ... No idea just how good No. 4 Michigan is after the Wolverines outscored Colorado State, Hawaii and UConn 166-17. Maybe Maryland can give Michigan something close to a game next week. ... The first FCS team to beat a Power Five opponent this season is Southern Illinois. The Salukis came in 0-2 and dropped Northwestern, which has lost two straight since beating Nebraska in Ireland. ... A week after the Sun Belt registered three Power Five road wins, South Alabama and Old Dominion had two more on their sights. But UCLA and Virginia both kicked walk-off field goals to avoid the upsets. ... March Madness in September: Kansas, Duke, Syracuse and Indiana are all 3-0. The Blue Devils and Jayhawks play in Lawrence, Kansas, next week.

Follow Ralph D. Russo at https://twitter.com/ralphDrussoAP and listen at http://www.appodcasts.com 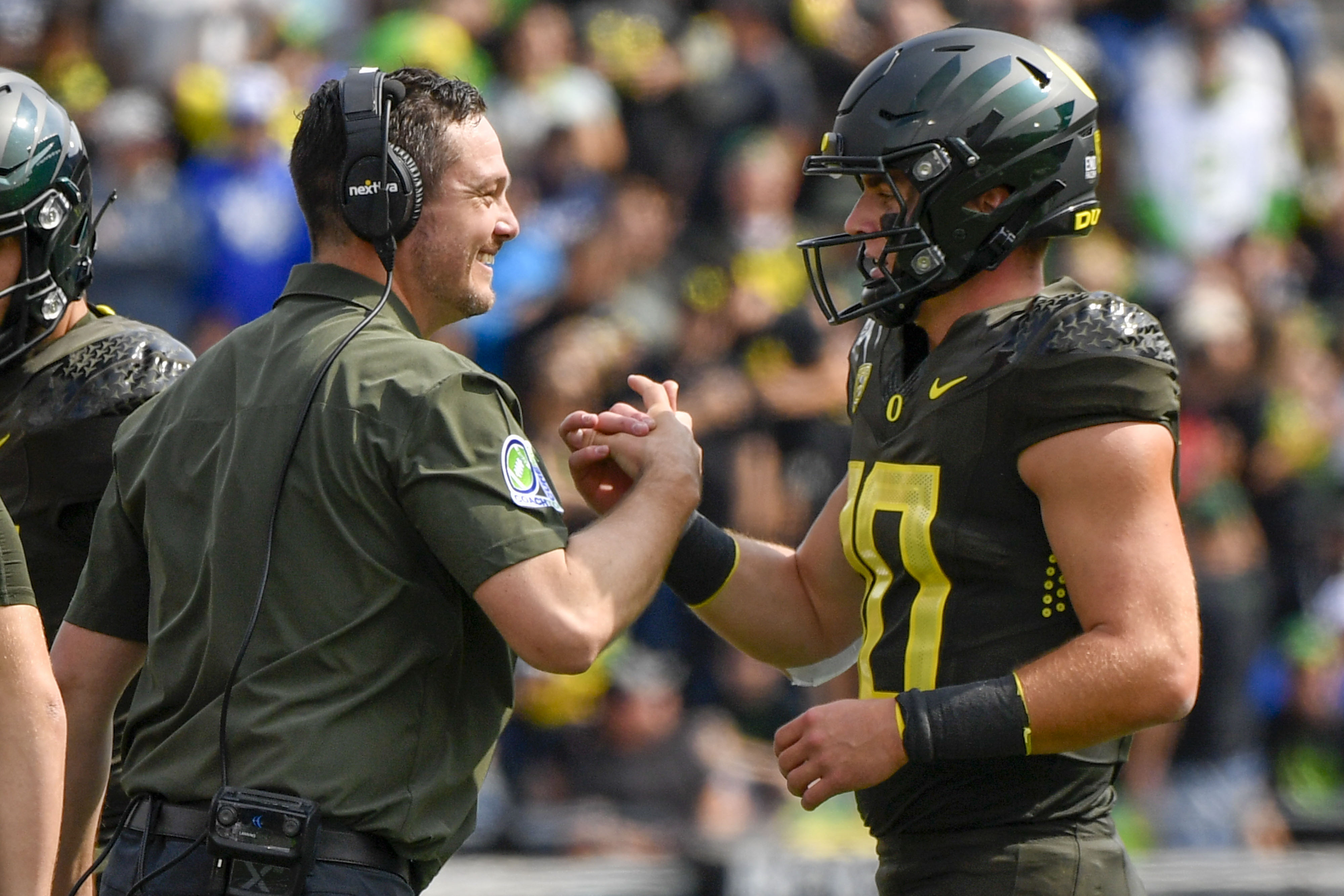 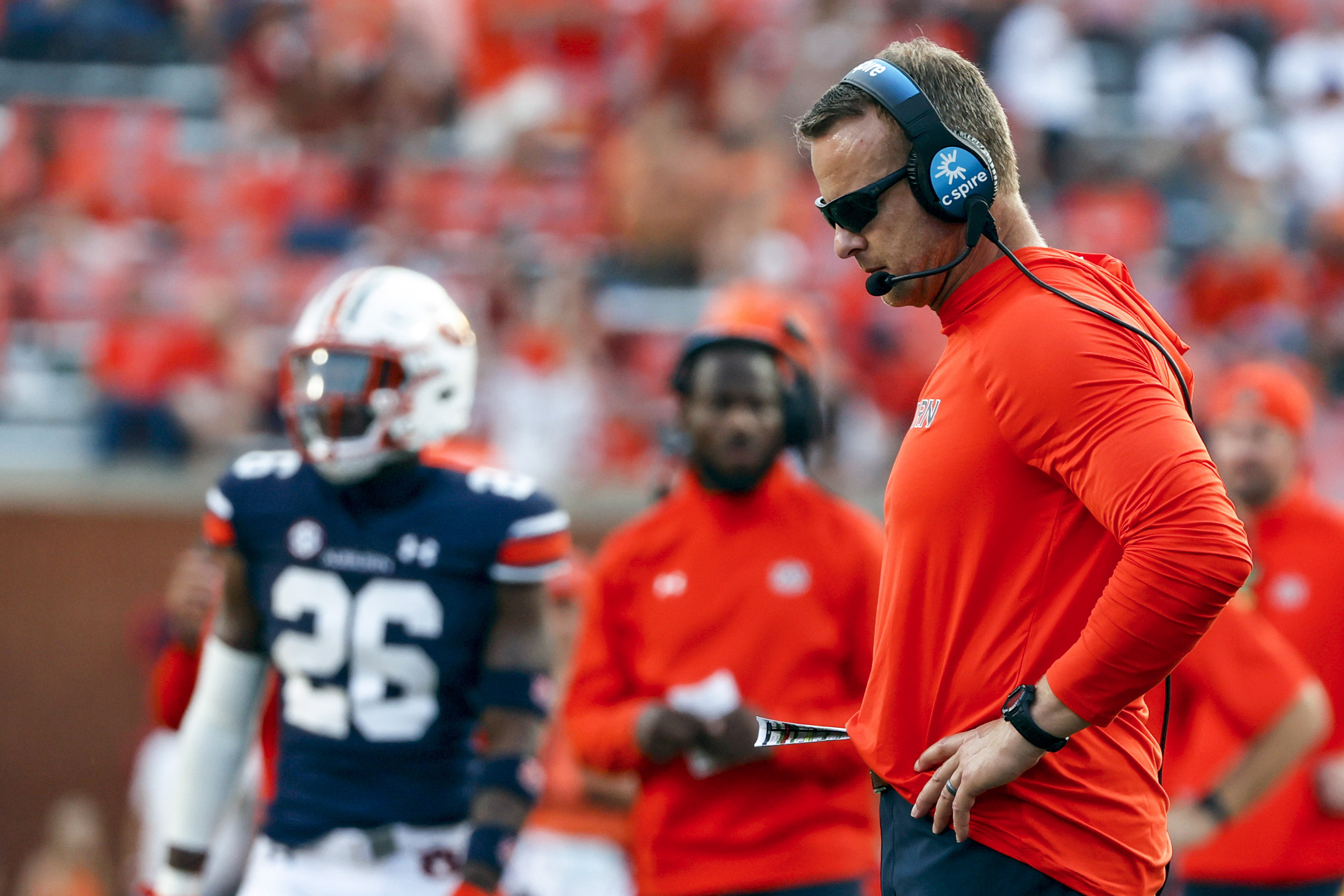 Auburn head coach Bryan Harsin reacts after a turnover during the second half of an NCAA college football game against Penn State, Saturday, Sept. 17, 2022, in Auburn, Ala. (AP Photo/Butch Dill)