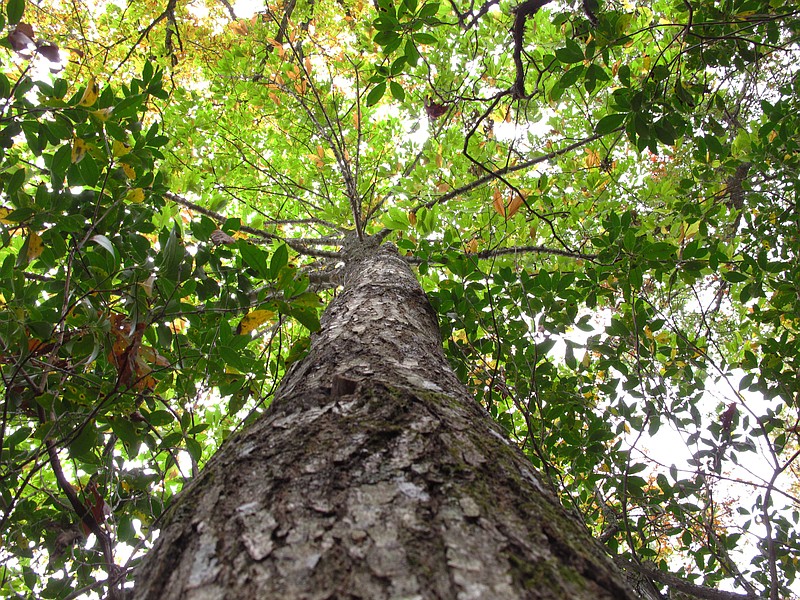 An American chestnut tree on Traylor Renfro's mountaintop retreat is seen Wednesday, Oct. 10, 2012, in Grassy Creek, N.C. After the species was devastated by an Asian blight in the early 20th century, a single American chestnut tree in Centreville has been deemed a “precious resource” by the Delaware Nature Society. Jim White, a senior fellow at the Delaware Nature Society, said the tree discovered at Coverdale Farm Preserve is the largest and oldest he’s seen in his 50-year career. (AP Photo/Allen Breed, File)

CENTREVILLE, Del. -- After the species was devastated by an Asian blight in the early 20th century, a single American chestnut tree in Centreville has been deemed a "precious resource" by the Delaware Nature Society.

Jim White, a senior fellow at the Delaware Nature Society, said the tree discovered at Coverdale Farm Preserve is the largest and oldest he's seen in his 50-year career.

"For people who are interested in trees, that's kind of a holy grail-type thing, to see a big American chestnut," he said. "I've never seen anything that size anywhere, and very few people have."

The tree is estimated to be about 50 years old and 70 feet tall, with a circumference of at least 35 inches, White said.

"That size is what's uncommon," said Sara Fitzsimmons, chief conservation officer at the American Chestnut Foundation. "Eighty percent of the remaining trees are an inch in diameter or less."

"Chestnuts roasting on an open fire," as Nat King Cole once sang, was once a common winter scene in Delaware and throughout the eastern United States. Humans, mammals, birds and insects alike dined on the hearty brown nuts, which were plentiful prior to the 20th century, according to the foundation.

There used to be about 4 billion American chestnut trees in eastern U.S. forests, until chestnut blight (Cryphonectria parasitica) arrived in New York via infected plants and spread rapidly, nearly wiping out the majestic trees.

The giant chestnut trees that used to dominate forests are all but gone; however, the fungus doesn't affect the roots of the trees. The centuries-old root systems sprout new trees over and over, just for them to die young due to the blight. The species is considered "functionally extinct."

"They have no ecological function in a landscape or ecosystem," Fitzsimmons said.

So the Delaware Nature Society staff was understandably ecstatic when, in 2019, hunter Bret Lanan noticed what he suspected was a mature American chestnut at Coverdale Farm Preserve, a Nature Society property.

State Botanist Bill McAvoy confirmed the tree was indeed an American chestnut, but its purity was still in question. It was likely the tree was cross-pollinated with a Chinese chestnut, a common ornamental plant that isn't as susceptible to the blight, according to White.

Only DNA testing could confirm the tree's purity, so Eric Kelley, an arborist from the nearby Mt. Cuba Center, climbed the tree and collected pollen samples.

The staff had a long wait ahead of them. The volunteer scientists tasked with testing the DNA were already busy researchers, and then the pandemic struck, White said.

It wasn't until recently that the Delaware Nature Society finally got its answer: The tree is indeed 100% American chestnut.

It's already been used in one Virginia Tech study on genetic variation within the species, according to Fitzsimmons. By surveying the genetics of nearly 400 trees, graduate student Alexander Sandercock and his colleagues hope to use the information to help develop conservation and breeding strategies.

In addition, the Delaware Nature Society plans to collect its seeds this fall, and the Mt. Cuba Center, another plant-focused nonprofit, has agreed to plant them.

"They were one of the most dominant forest trees in North America at one time, and we need all the help with trees we can get right now," White said. "Trees are so important to biodiversity, to mitigating climate change. ... Bringing the American chestnut back would be a big coup."

HOW 'CITIZEN SCIENTISTS' CAN HELP

While it's not common to find a mature American chestnut tree, it does happen, Fitzsimmons said. Because most people don't know what a mature tree looks like anymore, they can go unnoticed for years.

American chestnut tree leaves and nuts. The leaves are toothed and matte, as opposed to shiny.

"The American chestnut has been lost from the consciousness of most people for decades," Fitzsimmons said.

The American Chestnut Foundation has a staff of 20, according to Fitzsimmons. They rely heavily on "citizen scientists" to both find mature trees and plant new ones, such as is being done at Coverdale Farm Preserve and Mt. Cuba.

"Even if people just want to go out on a hike and find some trees," she said, "You can help us."

The foundation offers tips on how to identify an American chestnut, and if you think you've found one, you can send in leaf and twig samples for identification.