Movies were better in a theater. A theater filled with people.

Such was the case before the Internet. Before HBO. Before people holed up in their living rooms and away from their neighbors and friends.

Listen to the podcast here.

A time when pay-per-view meant you bought a ticket to watch a movie. You also grabbed a large Coke and a bucket of popcorn bigger than your head so you could share with your sister.

Movies were better in a theater because that was the only place you could see them.

Williams Theater was the movie theater In Ashdown, Arkansas. A smaller theater, but just the right number of seats for a town of 3,000 people.

My father ran the projector at Williams in the early and mid-50s. He often talked of how the pay the job generated provided the necessary dollars to put gas in his Model A coupe, which got him to work and took he and his friends places.

Dad talked often of the light the projector generated by what were essentially rod welders inside a chamber directly behind the lens.

The heat and smoke that were produced were significant, and I'm sure unhealthy, but necessary for the audience below to see Rebel Without A Cause, The Blob, and other now-classic films.

If you had two bits, you could live like a king at Williams Theater. It was more than enough to take in a first-run movie on a Friday night, or a newsreel, cartoons, and a double feature on a Saturday.

After buying a ticket, you still had money for that soda and popcorn, or a box of Dots and a dill pickle the size of a Buick.

A dozen or so years after my father worked there, he'd take my mom, sister and me to Williams Theater for an evening out.

My father took two things very seriously in his movie selections: funny and fighting. Comedies and World War II movies. We saw a lot of those.

In 1969 he took us to see Support Your Local Sheriff with James Garner. This was before The Rockford Files lit up 1970s TV screens and after Maverick made Oklahoma's Garner a star.

The film was cleverly written and highlighted Garner's ability to shine through his, I-don't-wanna-fight-but-I'll-still-win approach that always endeared him to both men and women.

My father laughed loudly all the way through that movie. My mom and the other ladies in the theater swooned.

John Wayne died in nine films if my count is correct. But the movie that is The Duke's best-remembered death scene was released in 1972.

And we saw it at Williams Theater.

When I was old enough to go to the movies without my parents, mom would drop my sister and me off there. We each had a quarter and could spend it how we pleased.

My sister spent all of her money. I often pocketed what remained after purchasing a ticket. A habit that seems to be the beginning of my frugality.

Williams Theater had a concave ceiling that was lit by multi-colored dim neon lights that went all the way around the walls.

To the right of the screen was a clock. The rim of the clock was black and the neon lit the face. It allowed you to keep track of time so that you knew when you had to have your date home.

I met my first real girlfriend at Williams Theater. She was introduced to me by a mutual friend as we all sat at the back of the theater watching a movie I can't recall. I was too occupied with holding her hand to pay attention to the screen.

In high school, I dated a different young lady, one whose grandfather had bought the theater. Since she helped him there on Friday nights, I spent a lot of time there.

Everyone spent a lot of time there.

Williams Theater was like many small town movie houses. It provided a place to go for a shared experience at a reasonable price.

Many great films were seen first hand, many hands were held first hand, and many of my memories I have to hand to Williams Theater.

John's latest book, Puns for Groan People, and his books, Write of Passage: A Southerner's View of Then and Now Vol. 1 and Vol. 2, are available on his website – TheCountryWriter.com, where you can also send him a message and hear his weekly podcast. 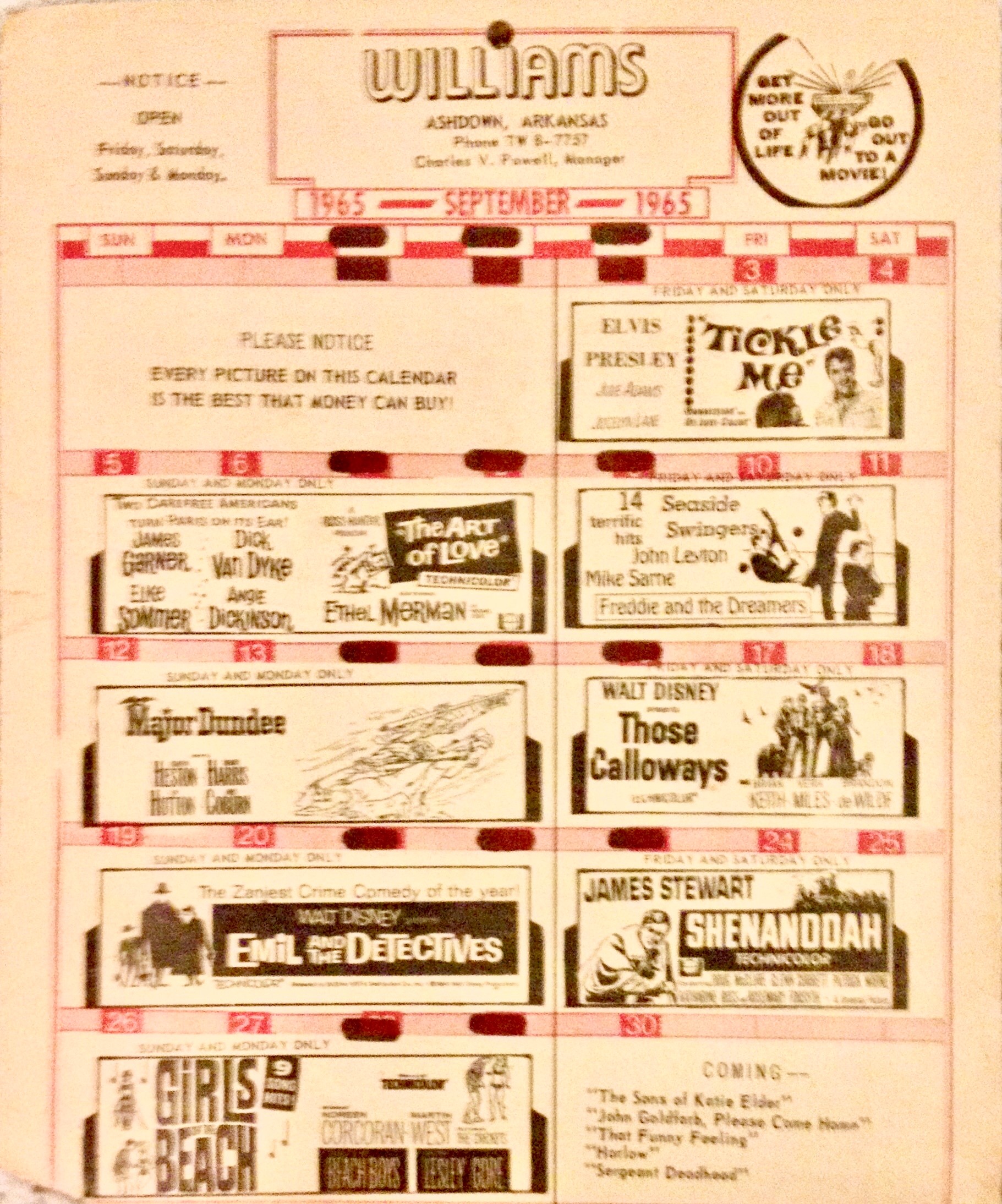 Columnist John Moore grew up watching movies at Williams Theater, which published a monthly list of films you could see. (Photo by John Moore)