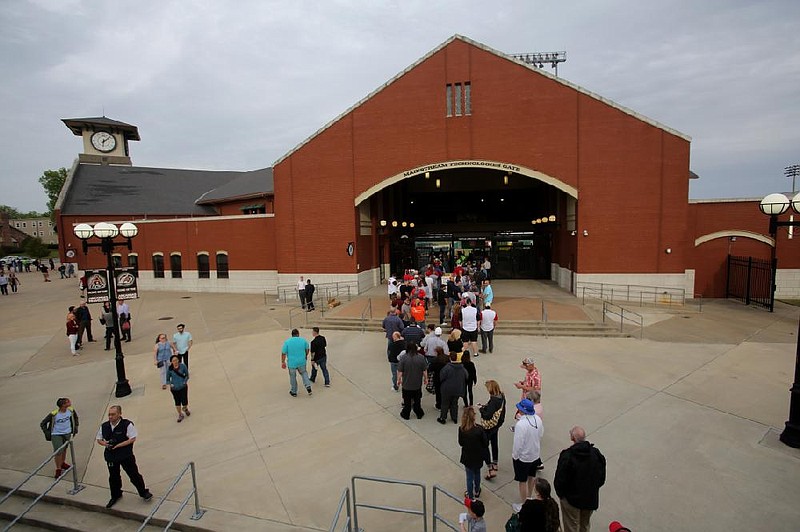 An Arkansas LGBTQ rights group canceled its participation in a Pride Night event at Dickey-Stephens Park on Thursday, saying the Arkansas Travelers baseball team would not allow a drag queen to throw out a ceremonial first pitch.

Central Arkansas Pride, the LGBTQ rights group, expressed hope that it and the Travelers can "work together" another time.

"In our agreement with the Arkansas Travelers, we were offered to allow a member of the LGBTQ+ community to throw the first pitch," the group said on Facebook. "This is something that we have done in the past to have representation at the game. A local drag queen from our community stepped up and wanted to have that honor. We presented this option to The Travs which was rejected.

"A solution was offered that would allow us to pick someone else but we would not be able to allow a drag queen to throw the first pitch. We felt that given this information that we could not proceed forward with the event as planned. Our goal is to promote diversity and visibility with Out Days events and we felt we needed to stay true to that mission. We hope that we can find ways to work together in the future and we also hope that you all understand why we came to this decision."

The Arkansas Travelers, which is affiliated with the Seattle Mariners and which plays its games at Dickey-Stephens Park in North Little Rock, did not address the question of whether the baseball team prohibited a drag queen from participating in the first-pitch ceremony.

The team, which said it has hosted Pride events in the past, hopes to work with Central Arkansas Pride again.

"The Arkansas Travelers have and always will be a place for ALL fans. We work with a number of 501c3 non-profits at Dickey-Stephens Park including hosting a Pride Night event in 2019 with Central Arkansas Pride. Although we have enjoyed working with them in preparation for an event in 2022, we respect and understand their decision to cancel their event this season. We will continue to create a safe and welcoming environment for all fans entering Dickey-Stephens Park and look forward to working with Central Arkansas Pride in the future."

Pride Nights at minor league ballparks have been growing over the years, according to Minor League Baseball, an organization of teams that include the Arkansas Travelers. Nineteen teams scheduled Pride Nights in 2017. The number increased to 41 teams in 2018. In 2019, Minor League Baseball announced the official launch of "MiLB Pride," with 65 teams across the nation taking part.

The endeavor was part of Minor League Baseball's Diversity and Inclusion initiative, which began in 2008 and which has included programs such as Copa de la Diversion and Women in Baseball.

As recently as Sept. 2, the Worcester, Mass., AAA affiliate of the Boston Red Sox held a Pride Night at its ballpark, where drag queens performed before the game, according to news accounts, and two drag queens threw ceremonial first pitches just before the game began, the team said. It was part of that city's annual, week-long Pride Worcester Festival.