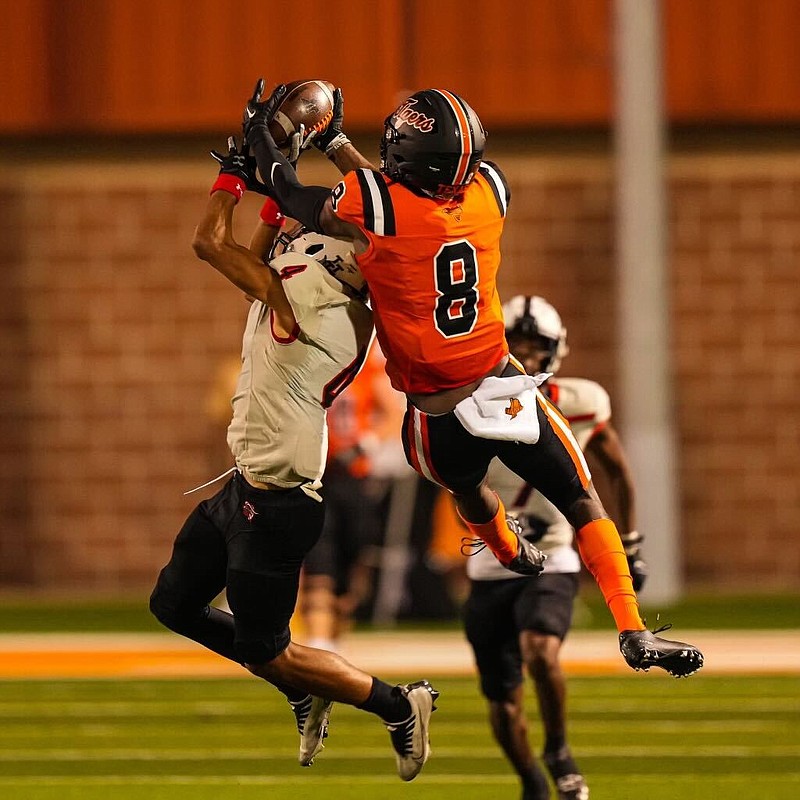 Texas High's Xavier Dangerfield uses his 6-2, 195-pound frame to go up and snag a catch against a Tyler Legacy defender on Friday, Sept. 17, 2022, at Tiger Stadium in Grim Park in Texarkana, Texas. The fifth-ranked Tigers extended their win streak to three in a row after defeating Class 6A Tyler Legacy, 27-3. (Photo courtesy of Texarkana Gameday)

For Texarkana teams, it couldn't have gotten much better.

Pleasant Grove piled on 622 yards of offense in its 63-28 shellacking of Frisco Memorial, fifth-ranked Texas High handled its business rather easily against Class 6A's Tyler Legacy with a 27-3 rout, and Liberty-Eylau -- the city's only remaining unbeaten team -- survived Atlanta to become 4-0 for the first time since 2010.

Arkansas High had a bye and will play this week in Magnolia.

In Southwest Arkansas, Prescott scored 36 points in the first quarter en route to a 63-20 victory over Class 5A opponent Hope. The win marked the program's 26th straight regular season victory. Genoa Central (3-0) is off to its best start ever in program history after defeating Cutter-Morning Star, 48-16.

Pleasant Grove puts on a 'clinic'

Junior QB Ahkhari Johnson led the way for Pleasant Grove on Friday night, throwing for 181 yards and two touchdowns on 11-of-16 passing, and scored two more times on the ground where he rushed for 31 yards on nine attempts.

Jaylen Boardley did what Jaylen Boardley normally does and finished with 196 all-purpose yards, rushing for 69 yards on six carries, hauling in four receptions for 77 yards and a score, and even returned a kickoff 50 yards.

On defense, Kaden McFadden made his presence known for the Hawks. He finished the night with seven tackles -- one for a loss -- pressured the Frisco QB and forced a fumble.

As Matt Fry said in his article Friday night, Pleasant Grove turned a stadium built to showcase soccer into an American football clinic.

Although it was the 19th overall meeting between Liberty-Eylau and Atlanta, this one hit a little different.

With their 14-12 victory, the Leopards not only held onto their swagger as Texarkana's only unbeaten team, but they also begin the season 4-0 for the first time since 2010.

"These kids are fighters and will rise to any challenge," Liberty-Eylau coach Dewaski Davis told the Gazette. "The kids have worked hard to be where they are now and we have a chance to be pretty good."

Despite the close contest, QB Jaydin Hampton still managed to hit the century mark against the pesky Rabbits defense, connecting on 17 of 26 passes for 105 yards. Greg London led the Leopards on the ground with 58 yards on 12 attempts.

The Leopards now hold a 14-5 record against Atlanta.

"We just need to get some timing down and have some new faces in new places," Davis said. "But we are feeling good. We still have one more tune-up game to get prepared for district play."

Liberty-Eylau (4-0) will look to keep its unbeaten record alive when it travels to Sulphur Springs (3-1) on Friday. Kickoff is scheduled for 7:30 p.m.

After suffering a season-opening loss, No. 5 Texas High has been all business.

And that included Friday night's 27-3 victory over Class 6A opponent Tyler Legacy.

Javari Johnson was a guaranteed first down every time he touched the ball, rushing for 126 yards on just eight attempts -- more than 15 yards per rush -- and found paydirt twice. Fellow sophomore David Potter threw for 177 yards on nine completions and two scores.

Brandon Hall and Tadarian Ball each received one of those touchdown passes.

Texas High (3-1) will host district foe Hallsville (3-1) next for Homecoming. Kickoff is scheduled for 7 p.m.

Nashville's Perrin too much for Charleston

Every time Charleston would mount a challenge, Nashville would answer. That is because the Tigers had no answers trying to stop Scrappers quarterback Sloan Perrin.

The senior ran and passed for three touchdowns in leading Nashville to a 27-19 win over Charleston on Friday night at Alumni Field.

"Give Charleston credit because they just kept battling," Nashville Coach Mike Volarvich said. "They have a great program here. I was proud of the way we battled also. I thought we were resilient tonight. There were times we could have folded, but we didn't.

Sophomore defensive back Skylar Gibson had two interceptions, the last one with 1:29 left, to help the Scrappers (3-1) hold off the Tigers (2-1).

Perrin finished the game with 138 yards rushing on 25 carries with 2 touchdowns while passing for 136 along and another score.

Genoa Central, which is riding its best start in program history at 3-0, flexed its offensive strength against Cutter-Morning Star on Friday night.

Waiting for the finishing touches on stadium renovations, the Eagles hosted Genoa Central in a home game on paper at Fountain Lake's Allen Tillery Field.

Genoa Central's Harrison Wilson busted through the line for a 50-yard touchdown to set the 48-16 final with 1:34 left to go in the game. He finished with 192 rushing yards and one touchdown.

"It felt good," Genoa Central Coach Chris Hudson said. "All week long we talked about how we had to match their physicality. They are big. They are rangy, and they are long. Their defensive line caused us problems. They did a good job getting penetration."

With the momentum of a devastating first-quarter performance, Prescott (3-0) dismantled Hope (0-3).

Hope's Kaleo White scored on an 82-yard kickoff return for a touchdown.

In the second quarter, Ravion Dickens padded Prescott's lead with touchdown runs of 1 yard and 52 yards.

Hope's lone score in the second quarter came on a 2-yard touchdown pass from Tyler Patterson to Kaleo Anderson.

Poole had Prescott's only scoring play in the third quarter on a 17-yard touchdown run.

Hope scored its only touchdown in the second half on a 5-yard pass from Patterson to Tamorrian Lindsey.

Quarterback Trip Baysinger found Hays and Carter Harris for two quick scores in the first quarter to give the Hornets an early 14-0 lead. Baysinger finished with 279 yards and three touchdowns on 16-of-22 passing.

In the second quarter, Baysinger again found Harris for a 19-yard touchdown. Hooks also had three rushing touchdowns in the quarter, with Walls scoring from 28 yards out, Baysinger running for a 10-yard score, and Dontravious Coulter's 3-yard rush, to give them a 36-0 lead at halftime.

Hooks' final score came in the fourth quarter on Coulter's second score of the game.

Redwater scored 14 points in the first quarter and it would be all it needed the rest of the way in a 14-7 win over host New Diana.

The Dragons got on the board first after Nick Farrar took a hand off 49 yards. Farrar finished with a game-high 85 yards rushing.

New Diana, however, tied it up shortly after returning an interception to knot the score at 7-all.

Marquez Jones then took a 100-yard kickoff return to the house for the final score of the game.

A tale of two halves in Paul Pewitt's loss

Payton Green rushed for 169 yards on 19 carries but it wasn't quite enough as Paul Pewitt lost a barn-burner to Troup, 60-58, on Friday night.

The game went into halftime tied, 14-14, but both teams came out with vengeance in the second half and scored 20 apiece in the third quarter and Troup outscoring the Brahmas, 26-22, in the fourth.

The Brahma defense forced four fumbles and recovered two. Kasi Watson returned an interception 37 yards for a score in the third quarter.

James Byrd, Issac Hodges and Jasen Cato each had long runs for Paul Pewitt in the second half. Byrd found the end zone on a 46-yard run, Hodges sprinted in on a 57-yarder, and Cato found paydirt on a 38-yard rush. 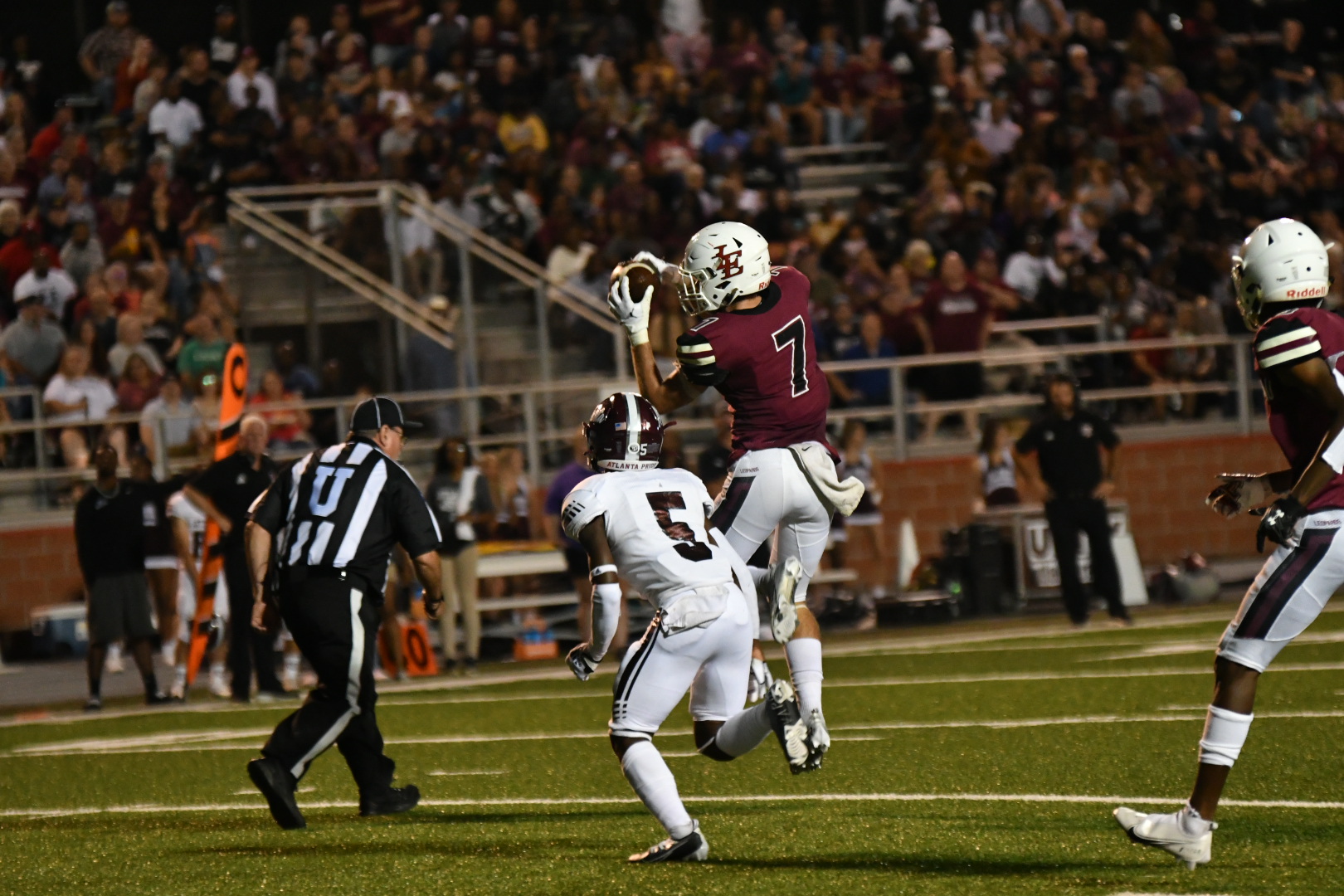 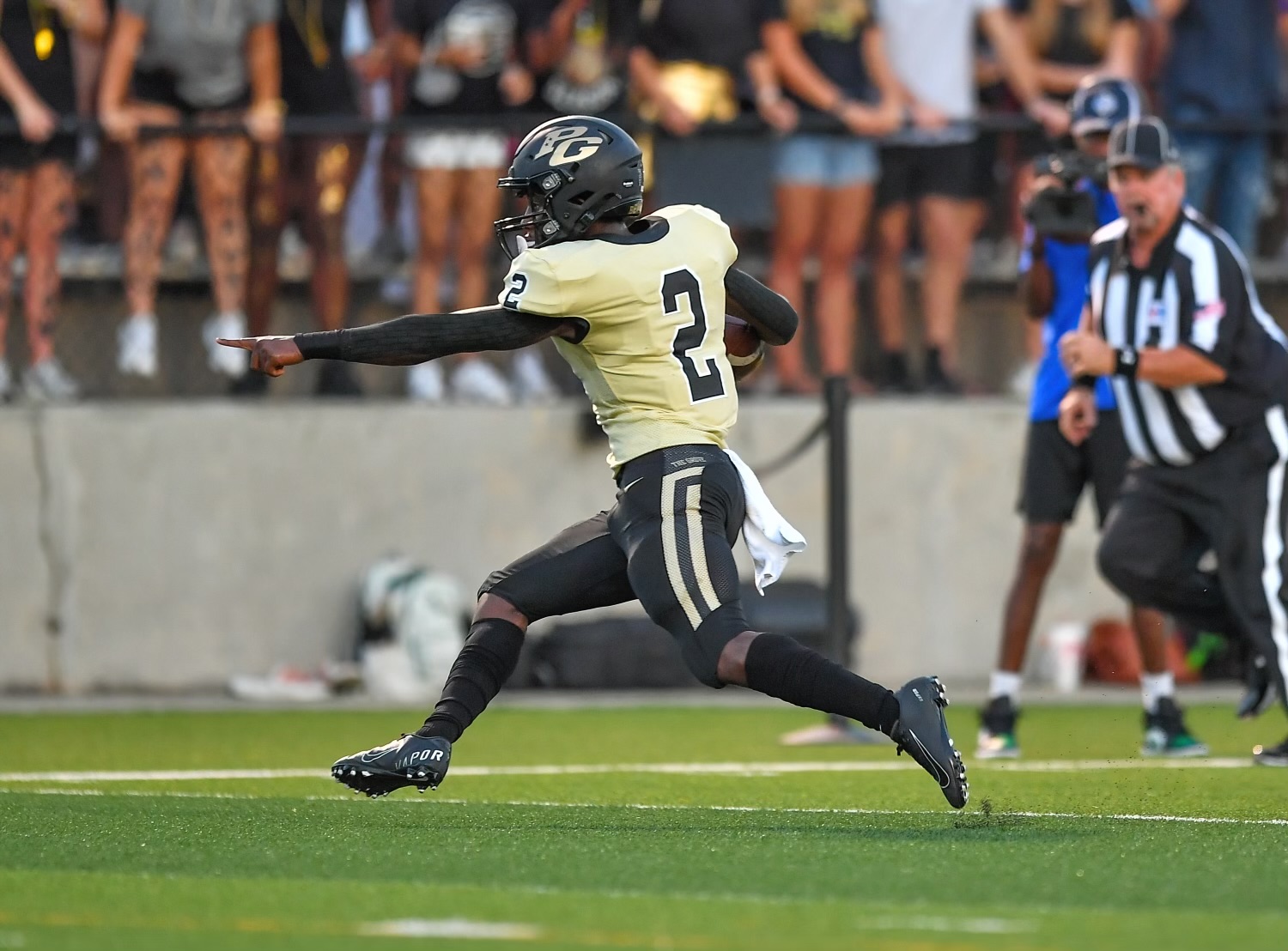 Pleasant Grove starting quarterback and cornerback Ahkhari Johnson directs traffic during a run against Nashville in Week 1 of last season. Johnson had four total touchdowns for the Hawks on Friday night against Frisco Memorial. (Photo courtesy of Texarkana Gameday)