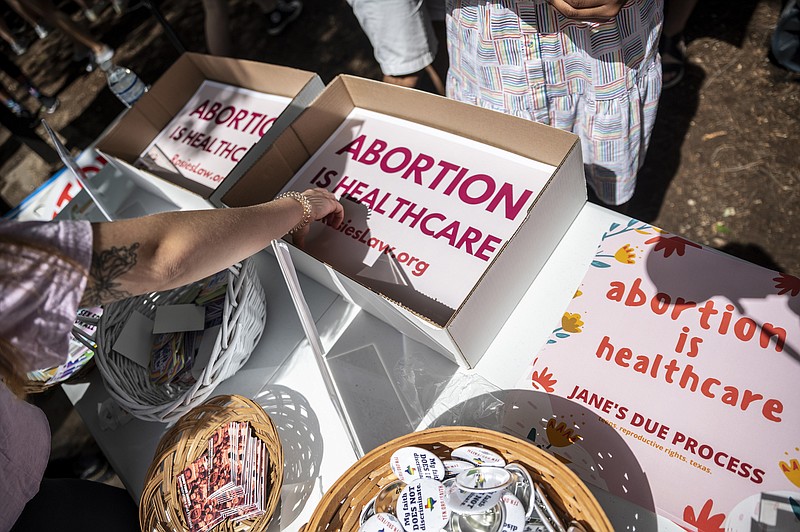 Attendees grab signs at a protest outside the Texas state Capitol on May 29, 2021, in Austin. (Sergio Flores/Getty Images/TNS)

WASHINGTON -- More Texans said they support the U.S. Supreme Court decision to overturn Roe v. Wade, according to a new poll that shows a 7-point jump from August.

The 1,268 Texans surveyed Sept. 6-13 were split at 46% over the court's ruling, according to a new Dallas Morning News/University of Texas at Tyler poll released Monday. The number of respondents reporting abortion should be illegal also rose 5 points to 49%, almost even with the number of people who believe abortion should be legal.

The poll results illustrate how divided Texans are on the subject of abortion. Nationally, Democrats hope the issue will have a significant impact on midterm results. Kansas, a traditionally conservative state, voted to protect abortion access in August and had a larger than expected voter turnout.

But without a referendum on the ballot, Texas activists would need Democrats to win the governor's office, the House and the Senate, an unlikely prospect in a state where a Democrat hasn't won a statewide office since 1994.

In fact, political scientists said voters' slight rightward tilt on abortion may have been a factor in helping Republican Gov. Greg Abbott make a 2-point gain on Democrat Beto O'Rourke in the high-stakes race for Texas governor.

The gap between voters who approve or disapprove of the Supreme Court decision to overturn Roe has been wider in national polls. In a September poll from The New York Times/Siena College, 29% of respondents expressed some level of support for the decision while 62% disapproved. The same percentage of national respondents said abortion should be always or mostly legal.

On Aug. 25, a trigger ban on abortions went into effect in Texas. While abortion was already effectively banned under Senate Bill 8 and laws on the books before the 1973 Roe decision, the new law increases penalties to the possibility of life in prison and a $100,000 fine.

The only exception to the trigger law is when the procedure is needed to save the patient's life. But voters in The Morning News/UT Tyler poll have overwhelmingly supported exceptions for rape or incest, including 77% of Republicans.

Ryan Samuels, a Republican from Collin County, said he approved of the decision to overturn Roe because it allows states to determine abortion laws, but he disagrees with how far Texas has taken its ban.

For example, Samuels said he supports exceptions for rape and incest. Though emergency contraception is available for victims, he said people may not have immediate access or knowledge of the pill.

Gov. Greg Abbott recently drew criticism for saying victims "can access health care immediately," and that calling police to report rape or incest will "ensure that the rapist will be arrested and prosecuted."

Still, going into the midterms Samuels said he is likely to support Abbott and other Republicans.

"If you take all the factors ... I think abortion by the Republicans could be done better, however, they win all the other (factors)," Samuels said, naming the economy, border security and education.

Leslie Hicks, a self-described conservative Democrat from McLennan County, said she disapproves of the Supreme Court decision and feels it is a step back for women.

"It is simply, mainly men, making the decision of how I should live my life," Hicks said. "It is not the government's job to make those decisions."

She said abortion will have a strong influence on how she votes in the November midterm elections, and she will likely vote for Democratic candidates.

Respondents in The Morning News/UT Tyler poll demonstrated confusion over the parameters of the existing Texas laws. Only 35% responded "completely true" when asked if a doctor could perform an abortion if a patient's life is threatened, while 36% said they didn't know and 29% said it was false.

In a different question, 23% of respondents said the Texas ban allows exceptions for rape and incest, which is not true; 36% said they did not know.