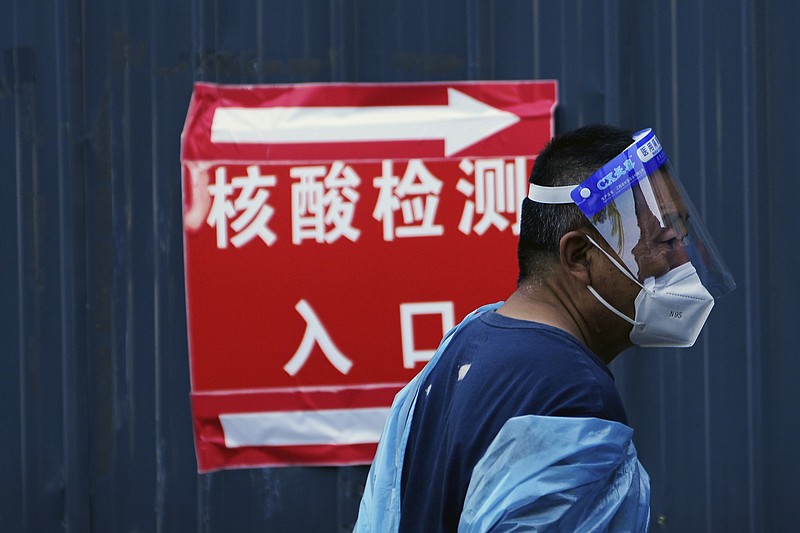 TAIPEI, Taiwan -- A nighttime bus crash that killed 27 people in southwest China this week has set off a storm of anger online over the harshness of the country's strict COVID-19 policies.

The initial police report did not say who the passengers were and where they were going, but it later emerged they were headed to a quarantine location outside their city of Guiyang, the capital of Guizhou province.

The bus with 47 people on board crashed about 2:40 a.m. Sunday. City officials announced many hours later that the passengers were under "medical observation," confirming reports they were being taken to quarantine.

Following public anger, Guiyang fired three officials in charge of Yunyan district, where the residents had been picked up, the provincial government said Monday. Guiyang's deputy mayor apologized at a news conference, bowing and observing a moment of silence.

Online, many wondered at the logic behind transporting people outside of Guiyang, accusing the government of moving them so that the city would no longer report any new cases.

"Will this ever end? On the top searches (on social media), there's all sorts of pandemic prevention situations every day, creating unnecessary panic and making people jittery," one person wrote. "Is there scientific validity to hauling people to quarantine, one car after another?"

Guiyang officials had announced the city would achieve "societal zero-COVID" by Monday, one day after the crash.

The phrase means new infections are found only among people already under surveillance -- such as those in a centralized quarantine facility or who are close contacts of existing patients -- so the virus is no longer spreading in the community.

China has managed the pandemic through a series of measures known as "clearing to zero," or "zero COVID," maintained through strict lockdowns and mass testing.

The approach saved lives before vaccines were widely available, as people refrained from public gatherings and wore masks regularly. However, as other countries have opened up and loosened some of the most onerous restrictions, China has held steadfast to its zero-COVID strategy.

While China has cut down its quarantine time for overseas arrivals and said it would start issuing student visas, the policy remains strict at home. Officials are concerned about the potential death toll and the impact any loosening would have on the country's stretched medical system.

Zero COVID also has become a political issue, and at one point was celebrated by many Chinese as signifying the superiority of their country over the U.S., which has had more than a million COVID deaths.

Chinese President Xi Jinping has cited China's approach as a "major strategic success" and evidence of the "significant advantages" of its political system over Western liberal democracies.

Yet, even as other countries open up, the humanitarian costs to China's pandemic approach has grown.

Earlier this year in Shanghai, desperate residents complained of being unable to get medicines or even groceries during the city's two-month lockdown, while some died in hospitals from lack of medical care as the city restricted movement. Last week, residents in the western region of Xinjiang said they went hungry under a more than 40-day lockdown.

According to FreeWeibo, a website that tracks censored posts on the popular social media platform, three of top 10 searches on Weibo related to the bus accident.

Many fixated on images of the bus shared by social media users. One photo showed the bus after it had been retrieved from the accident site. Its roof was crushed and portions missing. Another photo allegedly showed the driver decked out in a full white protective suit.

Users online questioned how a driver could see properly when his face was covered up, and why he was driving so late at night. Many comments were censored but some that expressed discontent with the current approach to the pandemic did remain up.

"I hope that the price of this pain can push for change faster, but if it's possible, I don't want to pay such a high price for such change," said the comment with the most likes on an online report about the accident by state broadcaster CCTV. "Condolences."

On Tuesday, Guizhou reported 41 new COVID-19 cases in the entire province. The province has been on high alert in the past few weeks after discovering one case at the end of August. It has locked down its capital city, using the euphemistic "quiet period" to describe the move, which means people are not allowed to leave their homes. 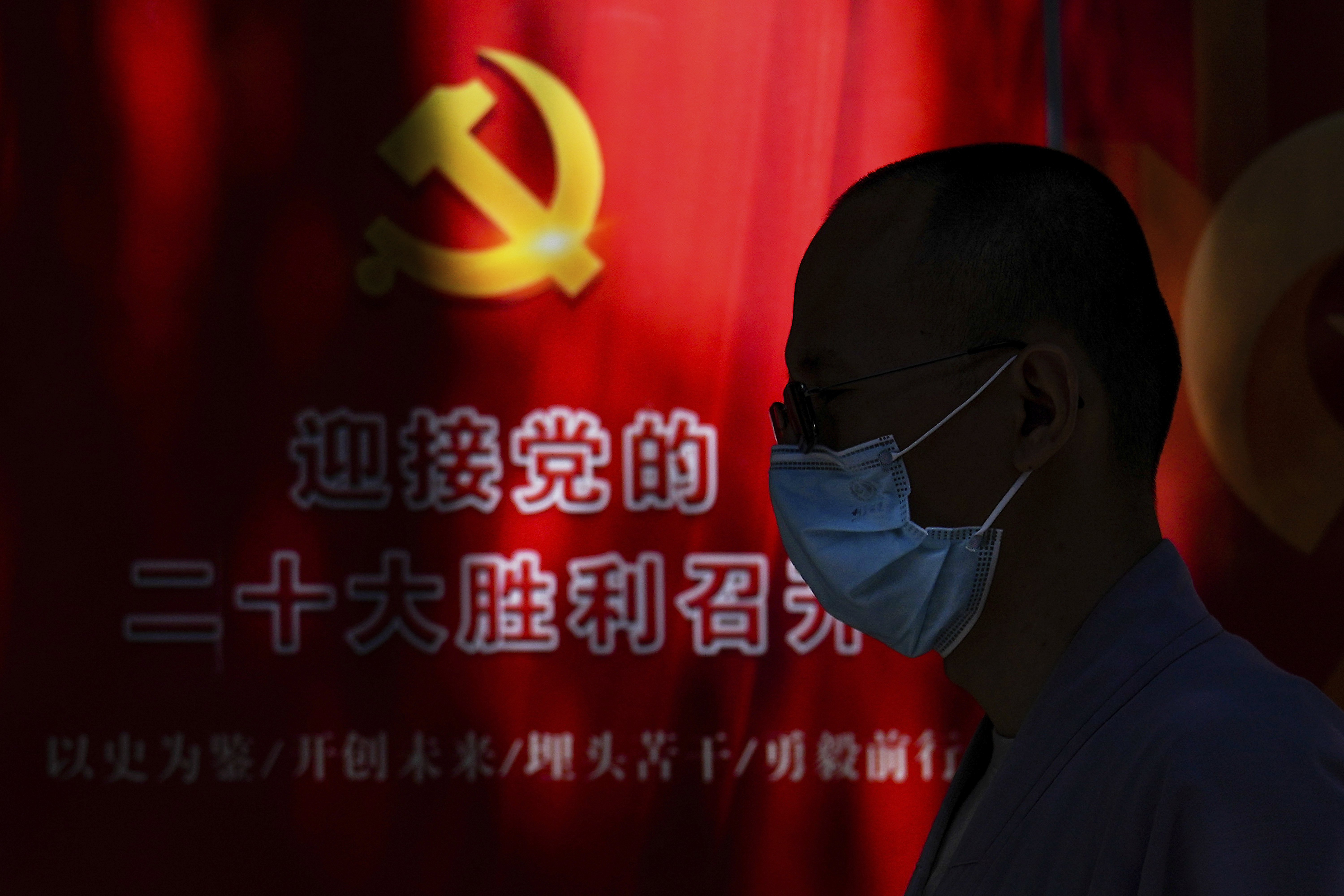 A man wearing a face mask walks by a propaganda poster welcoming the 20th party congress, along a street in Beijing, Tuesday, Sept. 20, 2022. (AP Photo/Andy Wong) 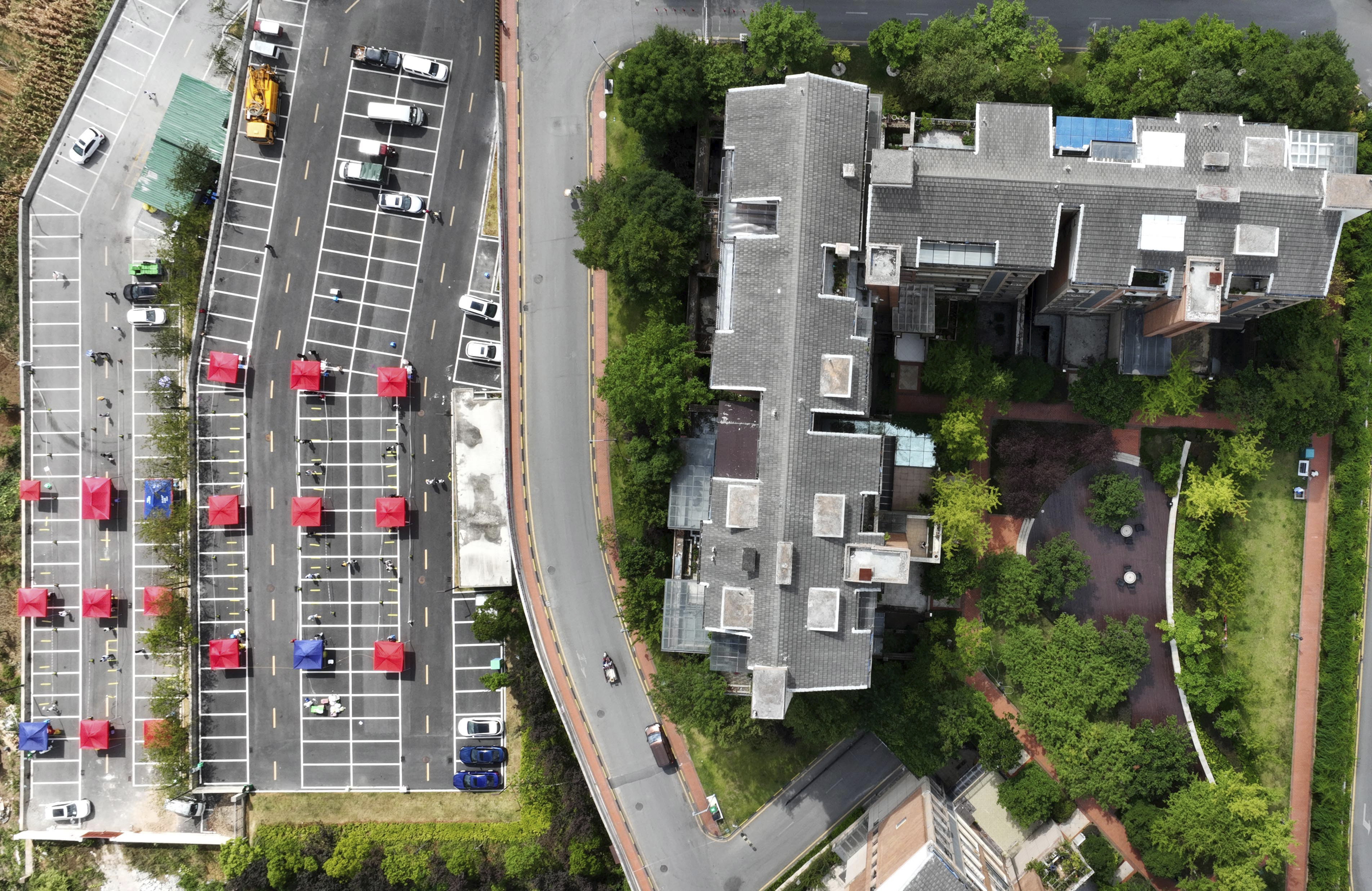 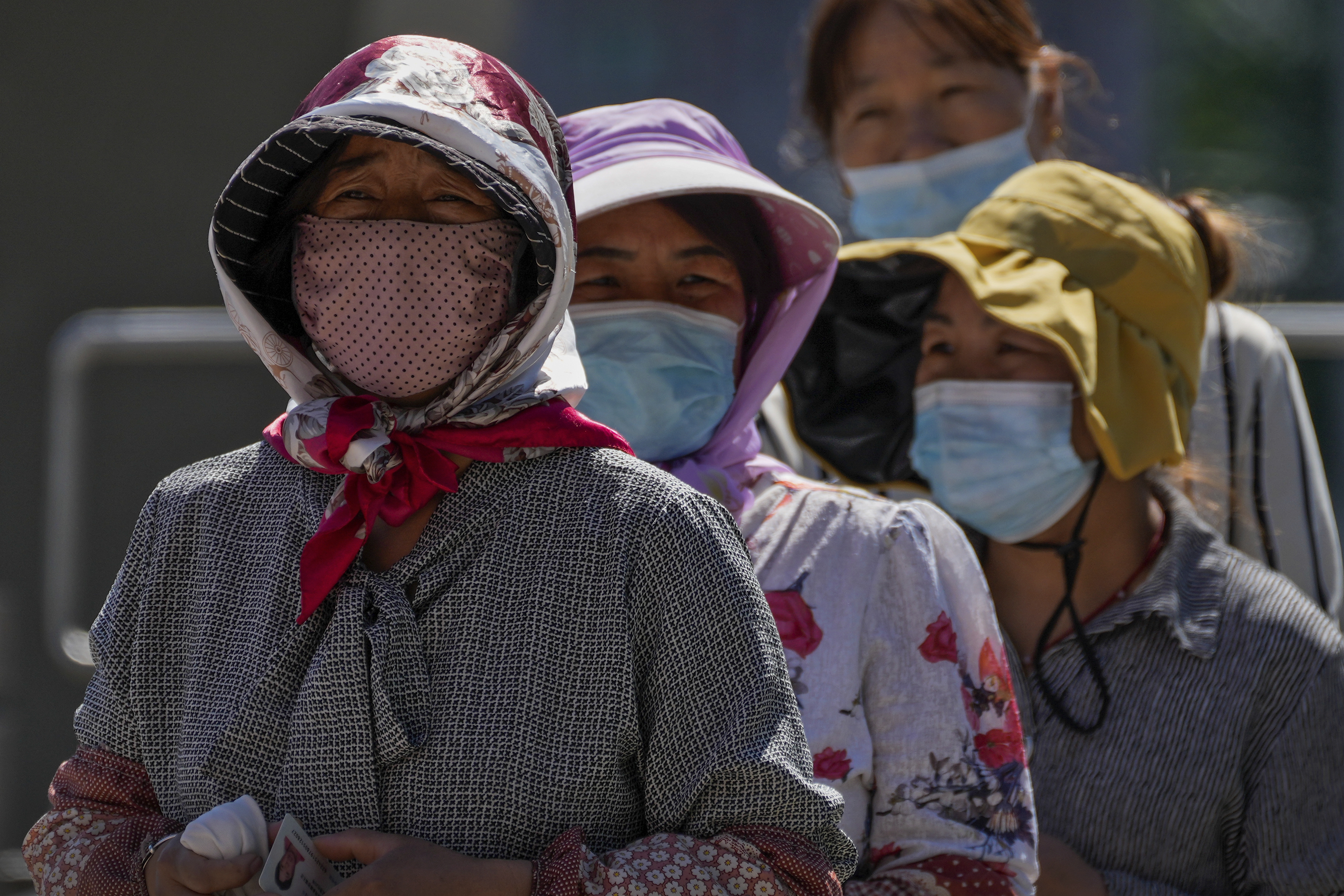 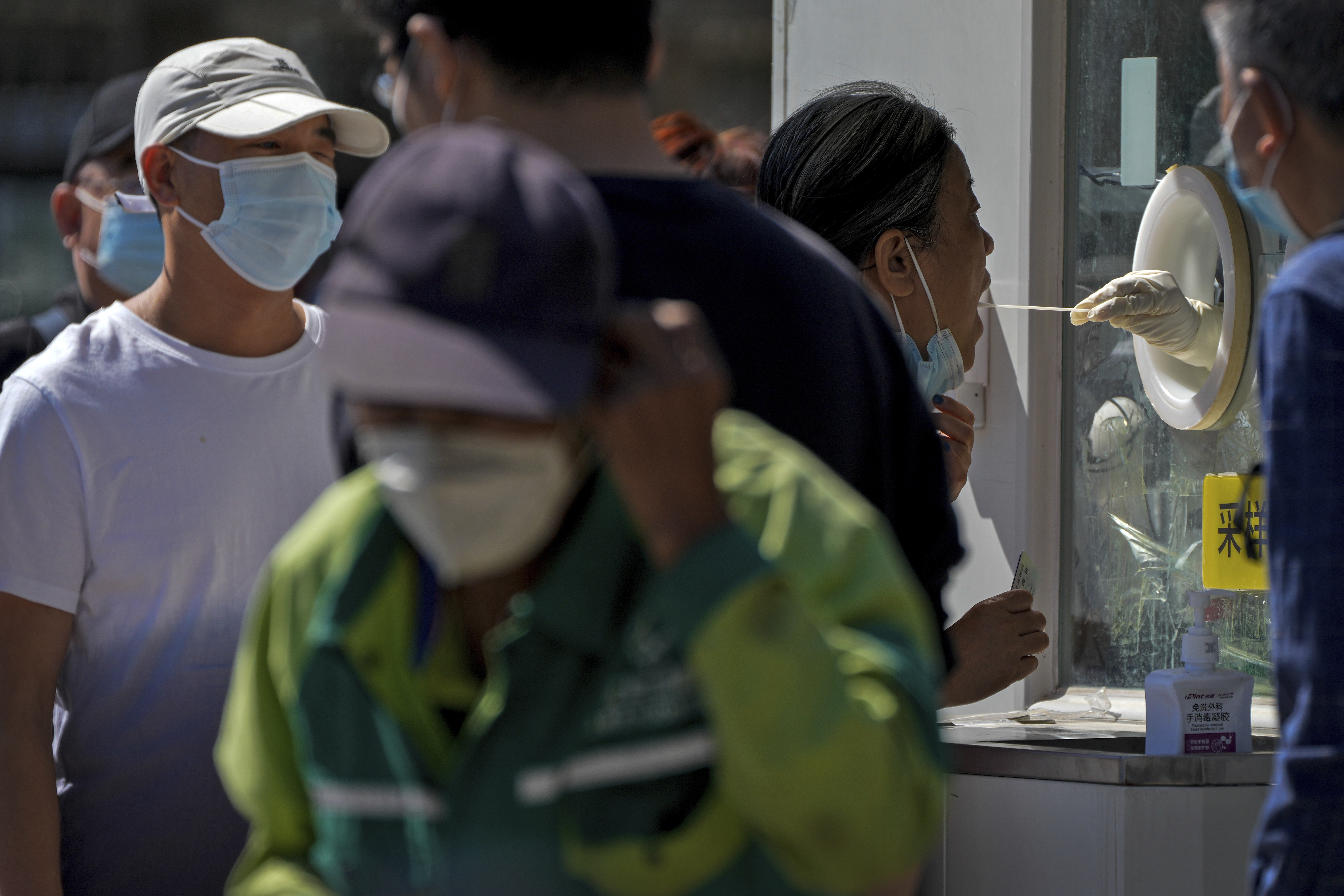