Puff pastry, peeled garlic and other kitchen shortcuts to love 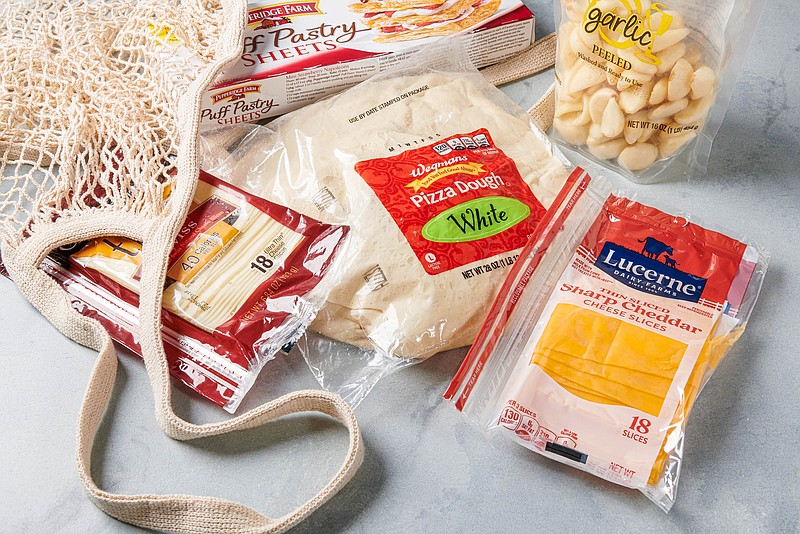 Puff pastry, peeled garlic and other kitchen shortcuts we love. MUST CREDIT: Photo by Rey Lopez for The Washington Post.

A few weeks ago, I wrote about store-bought shortcuts that I think aren't as good as what you can do at home - times when just a little extra effort and time can make a difference. Now I'm taking the flip side, sharing recommendations from me and my colleagues for items where, as Ina Garten is famous for opining, store-bought is fine.

Sliced cheese. Store-bought shredded cheese is often coated with anti-caking ingredients that can prevent you from getting smooth and creamy results in certain dishes. That's not the case with sliced cheese, which often employs paper in between slices to prevent them from sticking to each other. You can buy sliced cheese, including cheddar, provolone, low-moisture mozzarella and Swiss, in packages or from the deli counter, where you can choose your desired thickness. I especially appreciate ultrathin slices, which I'd never achieve at home. I like to pile them into sandwiches or drape them on top of warm sausage sandwiches.

Puff pastry dough. Most of us don't have the time to make puff pastry from scratch, and not everyone is confident enough to do it either (me, it's me). So frozen puff pastry is one of the best shortcuts out there. If you can, go for a butter-based product such as Dufour, though the version made with vegetable-based fat by Pepperidge Farm was pretty good, too. For an easier way to dinner, use puff pastry as the crust for a quiche or savory tart. It's also ideal for whipping up small dessert tarts or cinnamon rolls.

Pizza dough. Pizza night typically depends on a bit of advance planning to account for making the dough and letting it rise. Impulse pizza often involves pulling out a store-bought frozen pie or ordering in. Instead, aim for an in-between solution by picking up some dough at the grocery store or your local pizza shop. You should be able to keep it in the fridge for about five days. Just give yourself an hour or so to let it come to room temperature before shaping and baking.

Peeled garlic cloves. "I think I will never buy a head of garlic again," says our multiplatform editor Jim Webster. He first bought the peeled cloves after a few garlic-intense recipe tests and was converted to their convenience and essentially identical flavor to cloves from a head. Cook's Country says you don't want to keep them in the fridge beyond two weeks, so plan to freeze excess. Keep in mind that frozen cloves won't be quite as potent - you can always use more than a recipe calls for to compensate.

Peeled and chopped butternut squash. These winter squash are gnarly enough to break down even if you have a great knife. If you don't, or if you have mobility limitations that make cutting one up even more challenging, prepped butternut squash can be a game changer and timesaver. Even better, you can find it fresh in the produce section or on the frozen foods aisle. Put to good use in soups, quiche, chili, risotto and more.

Concentrated broth bases. "I do not have the bandwidth/freezer space for homemade stock," says Voraciously staff writer Emily Heil. Instead, she turns to products such as Better Than Bouillon, which offers concentrated bases in a variety of flavors that you can dilute with hot or boiling water for broth on demand (or add to a recipe along with the appropriate amount of liquid). The chicken and vegetable versions both earned high rankings in taste tests from America's Test Kitchen, above other carton options. The base has an extremely long shelf life - two years from the date of manufacture - and you can make as small or big of a batch of broth as you need, to avoid having to store partially open cartons that you inevitably forget about (guilty).