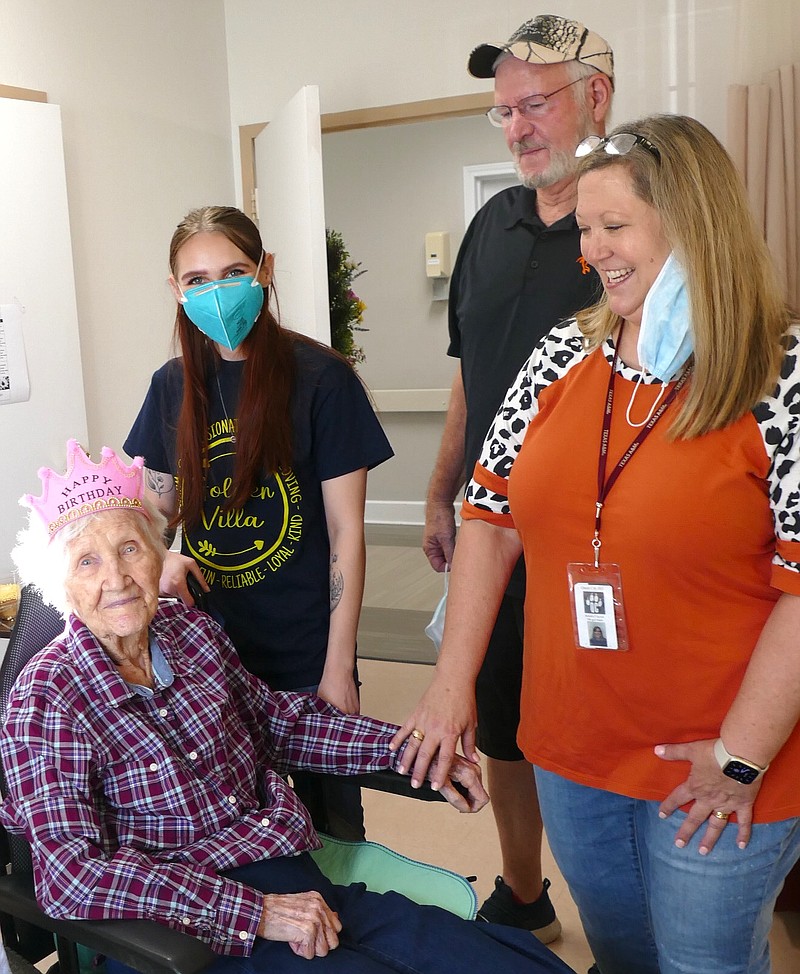 Katie Evalee Clayton, wearing her birthday party hat, was 104 last Tuesday, Sept. 13. Happy to be with her on the occasion are, from left, Golden Villa employee Summer McBride and son Gary Clayton and his wife Kendra. (photo by Neil Abeles)

Queen City's Katie Evalee Clayton turned 104 recently and has set some kind of record. She has five sons who still mind her.

The five boys came to her birthday party Sept. 13 in her new surroundings at the Golden Villa Nursing Home. They were all in agreement about one thing.

No one was surprised when mom met them with clear blue eyes, lightly coiffed silver hair, a reasonate voice and plenty of charm. This was after she'd taken two recent falls, straining some muscles and having cracked a bone.

So tough? Here are four reasons to say so, starting with growing up. This was when Katie would have all the boys all day long since her late husband Maurice was off to his defense plant job before daylight and home again after dark.

n First reason. "She took us to church every Sunday morning, Sunday afternoon and Wednesday evening. That's every," the boys said.

n Second. Gary remembers as a child one day out in the field Katie stepped on a nail that went through her foot.

"I couldn't. Too scared. So, she did herself, put a rag around it and stayed out in the field," he said.

n Third. She refused every dentist's offer of novocaine. "Just drill," she might have said.

n Fourth. Even after falling at 104, she's sitting up straight in her chair with freshly ironed clothes and an interest in everything going on. She looks more comfortable than her well-wishers.

"I'm four," she insisted when asked her age. She holds up four fingers in case you don't catch her drift.

"After the 100th, she started all over," said daughter-in-law Kendra Clayton, Gary's wife. "So she's four today."

Amid all the cake, balloons, flowers and visitors, Katie wants to know who everyone is. Several are behind their COVID masks.

"Who are you?" Katie asks quickly and just as quickly knows you. She has more than 30 grand- and great-grandchildren. Even the boys can't recall all the names.

One reason all the sons turned out so well is because of the breakfasts Katie gave them for so many years.

"We didn't have a lot, and I remember we couldn't have candy and cookies and things," Gary continued. "But every afternoon, we'd come home and mother would have sweet potatoes, one for each of us, baked in the oven so we could have something sweet."

Such stories and memories abound about Katie. Most were mentioned only in passing on this day because Katie's hearing is not so good. But one could bet the boys and all the other relatives were careful in what they said. They were being tended to by Katie Evalee Clayton, who is four plus one hundred, and she's not to be overlooked. Not when she has five sons who know how really tough she is. 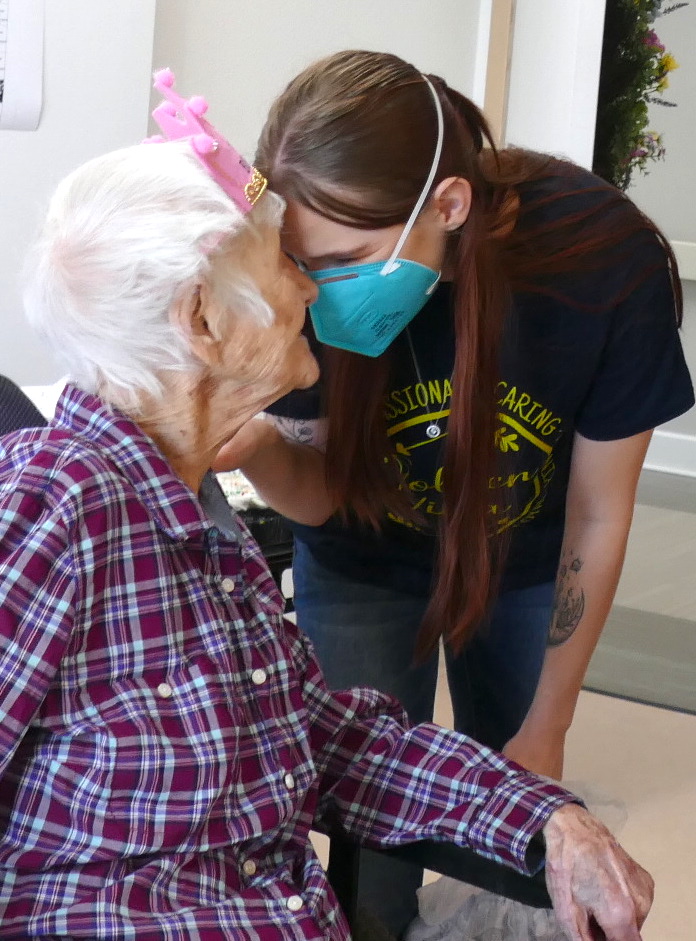 Those who care for Katie Evalee Clayton, now 104, get a kiss every now and then, as well the chance to give one. That’s caregiver Summer McBride, who is happy to oblige. (photo by Neil Abeles)