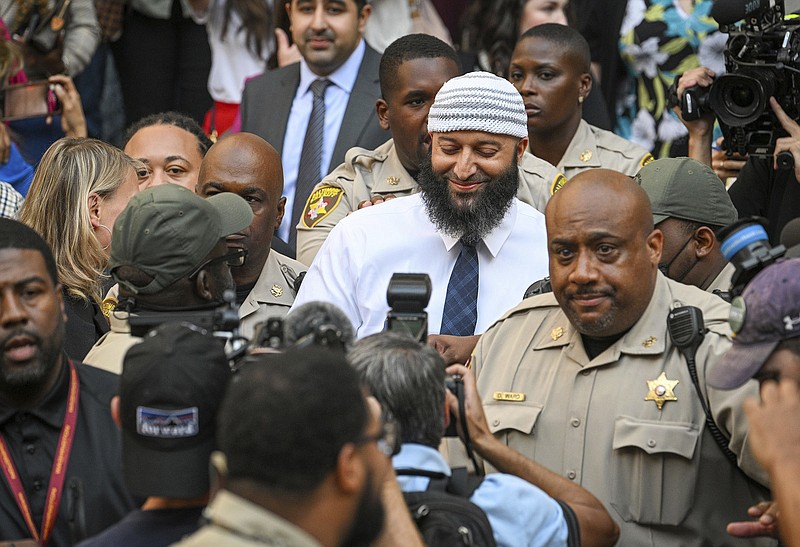 The creator of a true-crime podcast that helped free a Maryland man imprisoned for two decades said Tuesday that she feels a mix of emotions over how long it took authorities to act on evidence that's long been available.

The judge's order to release Adnan Syed and vacate his murder conviction Monday came after the local prosecutor started a unit to review sentencing and a new Maryland law relating to juvenile sentencing provided a mechanism for reexamining the case, all after the "Serial" podcast in 2014 turned the details of the case into an obsession for countless amateur sleuths.

Baltimore State's Attorney Marilyn Mosby immediately applauded the judge's decision as a victory for justice, but Syed's win came as a bittersweet reminder to those who had been aware of the gaps in the case for years. In a new episode of "Serial" released Tuesday, host Sarah Koenig noted that most or all of the evidence cited in prosecutors' motion to overturn the conviction was available since 1999.

"Yesterday, there was a lot of talk about fairness, but most of what the state put in that motion to vacate, all the actual evidence, was either known or knowable to cops and prosecutors back in 1999," Koenig said. "So even on a day when the government publicly recognizes its own mistakes, it's hard to feel cheered about a triumph of fairness. Because we've built a system that takes more than 20 years to self-correct. And that's just this one case."

Koenig argued that the case against Syed involved "just about every chronic problem" in the system, including unreliable witness testimony and evidence that was never shared with Syed's defense team.

On Monday, Circuit Court Judge Melissa Phinn in Baltimore ordered Syed's release after overturning his conviction for the 1999 murder of high school student Hae Min Lee, Syed's ex-girlfriend. Syed, 41, has always maintained his innocence but in 2019 the state's highest court had rejected his appeal for a new trial.

At the behest of prosecutors who said they had recently uncovered new evidence, Phinn ruled that the state violated its legal obligation to share evidence that could have bolstered Syed's defense. The judge said the state must decide whether to seek a new trial date or dismiss the case within 30 days.

Mosby, who entered office in 2015, filed a motion last week to vacate Syed's conviction, a filing that Koenig described as a "firework" coming from the same office that asked a jury to convict Syed years ago.

In the "Serial" episode posted Tuesday, Koenig broke down prosecutors' motion and described how some evidence they cited was featured in the podcast, while other evidence -- including the evidence of other possible suspects -- became public more recently.

Key to Monday's outcome was evidence uncovered by a unit that Mosby's office launched to reexamine cases in which juvenile defendants were given life sentences. That worked in tandem with a 2021 Maryland law that enables someone convicted as a juvenile to seek a reduced sentence after serving at least 20 years. Syed was 17 when Lee was killed.

Prosecutor Becky Feldman led the unit and found notes written by one of her predecessors describing two phone calls in which people gave them information before Syed's trial about someone with a motive to harm Lee. That information wasn't given to the defense at the time, according prosecutors, an omission that Phinn said violated Syed's rights.

Koenig noted that she knew who these two new potential suspects were -- and so did detectives who investigated Syed two decades ago -- but declined to name them because they haven't been charged.

Other supporting evidence on the unreliability of a key witness and questions about cellphone data was previously featured on "Serial," Koenig said.

"If you've listened to our show you probably remember all of this," Koenig said.

Koenig said the show delved into questions about cellphone data that prosecutors used to bolster the witness's testimony. But she acknowledged that expert analysis used by prosecutors to arrive at their current motion wasn't fully explored on the show.

"We didn't get to the bottom of this incoming call problem back when we were reporting this story," she said.

In the years since "Serial" chronicled Syed's case and transformed the true-crime genre, a number of breakthroughs have come in other cases examined by like-minded podcasters.

In Sydney, Australia, last month, a 74-year-old man was convicted of killing his wife in 1982, charges brought after police launched a renewed investigation based on a circumstantial case made against him in the popular podcast "The Teacher's Pet."

A lengthy murder trial is also underway in Salinas, California, against a man for the death of Kirstin Smart, a freshman who vanished from California Polytechnic State University in San Luis Obispo in 1996. The sheriff has said the "Your Own Backyard" podcast helped produce new information and prompted witnesses to speak with detectives.

And the podcast "In the Dark" obtained a recorded recantation from a jailhouse informant that, together with an analysis of racial bias by a Mississippi prosecutor in jury selection, preceded the U.S. Supreme Court's 2019 decision to overturn the murder conviction and death sentence of Curtis Flowers. Flowers, a Black man, had been convicted in the shooting death of four people in a furniture store in 1996. Mississippi prosecutors later dropped charges against him. 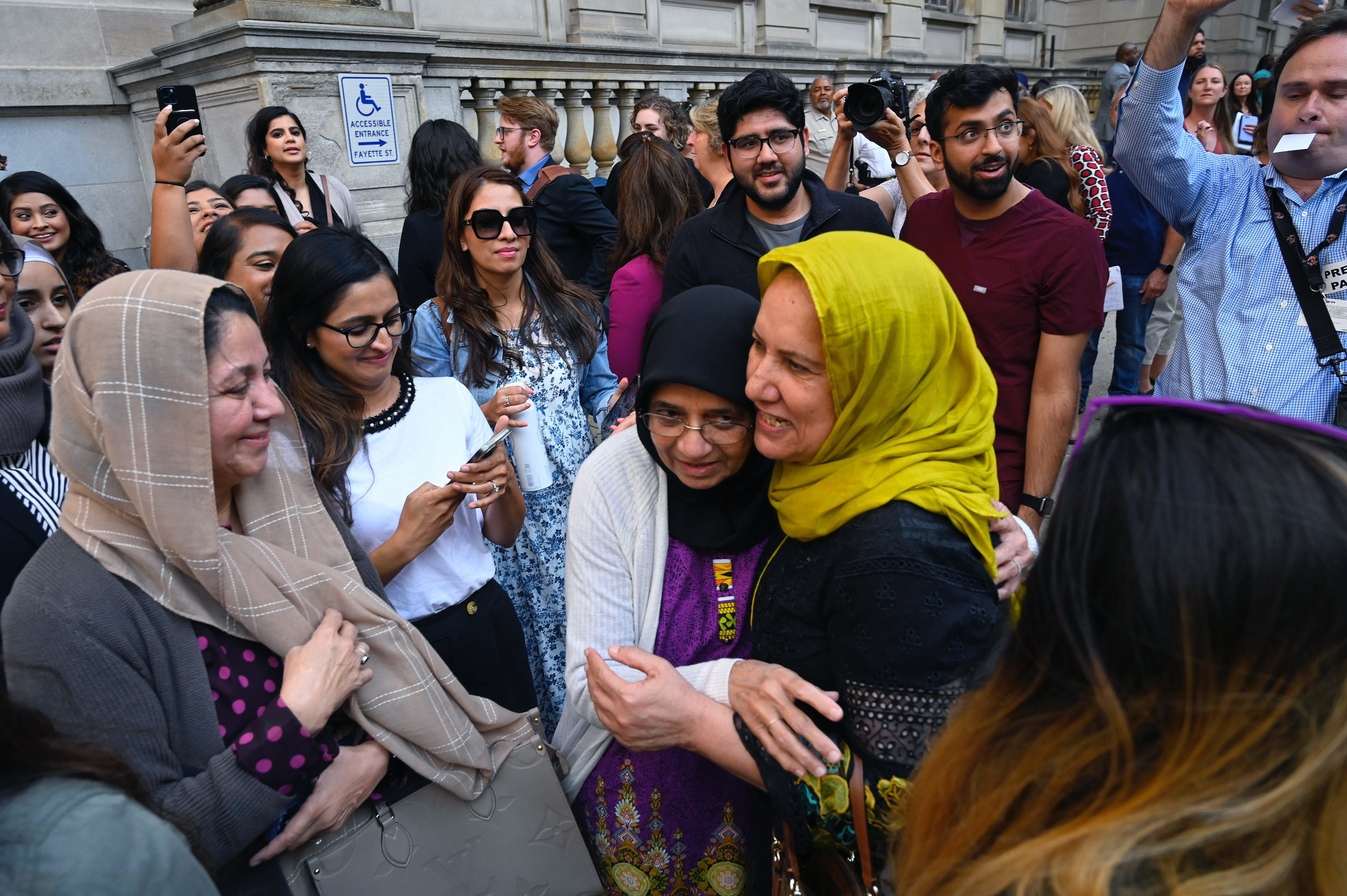 Adnan Syed's mother, Shamim Syed, center right, celebrates with friends outside of the courthouse after a Baltimore judge ordered the release of her son after overturning his conviction, Monday, Sept. 19, 2022, in Baltimore. (Kenneth K. Lam /The Baltimore Sun via AP) 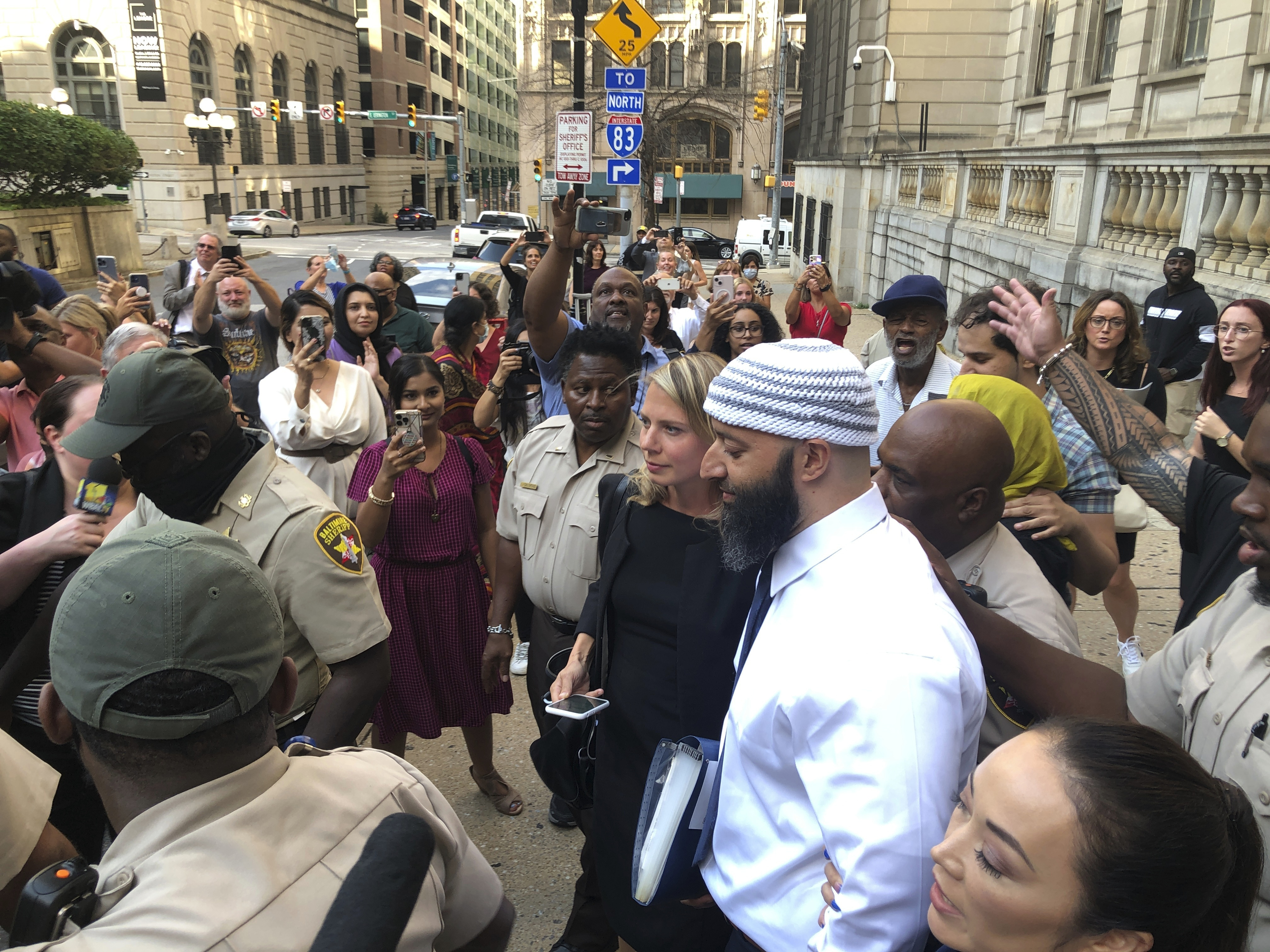 Adnan Syed, center, leaves the Cummings Courthouse, Monday, Sept. 19, 2022, in Baltimore. A judge has ordered the release of Syed after overturning his conviction for a 1999 murder that was chronicled in the hit podcast “Serial.” (AP Photo/Brian Witte) 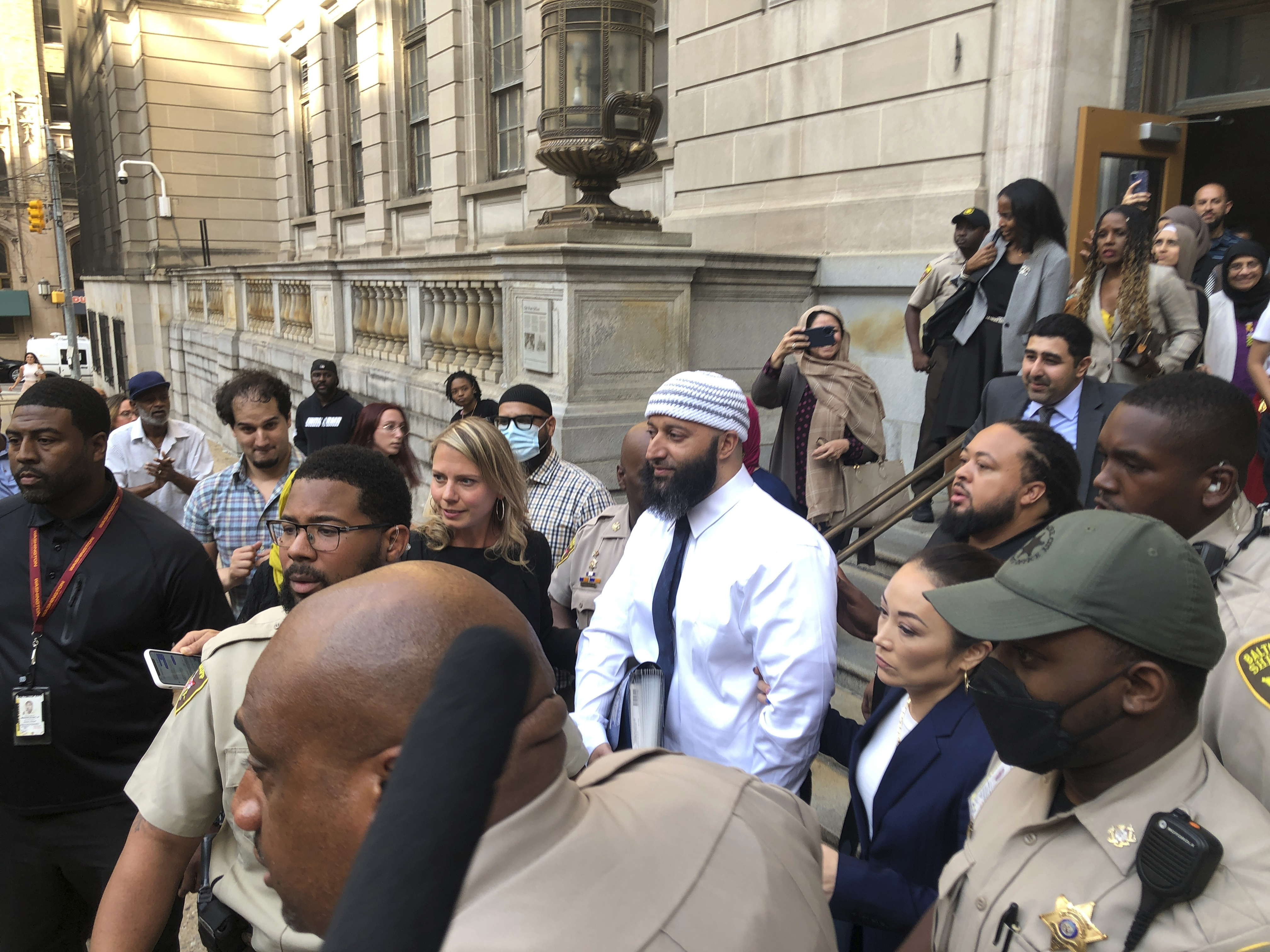 Adnan Syed, center, leaves the Elijah E. Cummings Courthouse, Monday, Sept. 19, 2022, in Baltimore. A judge has ordered the release of Syed after overturning his conviction for a 1999 murder that was chronicled in the hit podcast “Serial.” (AP Photo/Brian Witte) 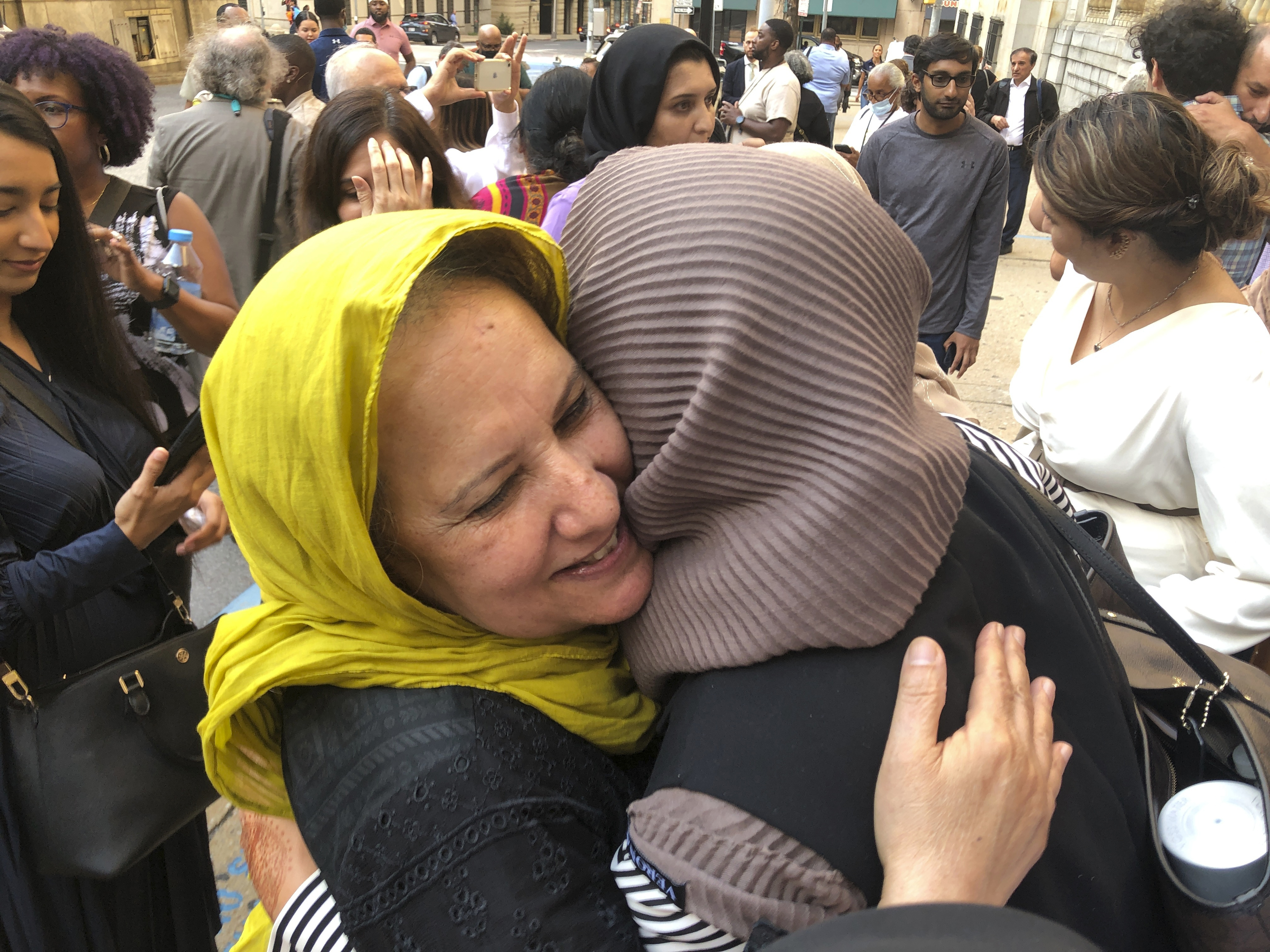 Shamim Syed, Adnan Syed's mother, left, celebrates with others outside the Cummings Courthouse, Monday, Sept. 19, 2022, in Baltimore. A judge has ordered the release of Adnan Syed after overturning his conviction for a 1999 murder that was chronicled in the hit podcast “Serial.” (AP Photo/Brian Witte) 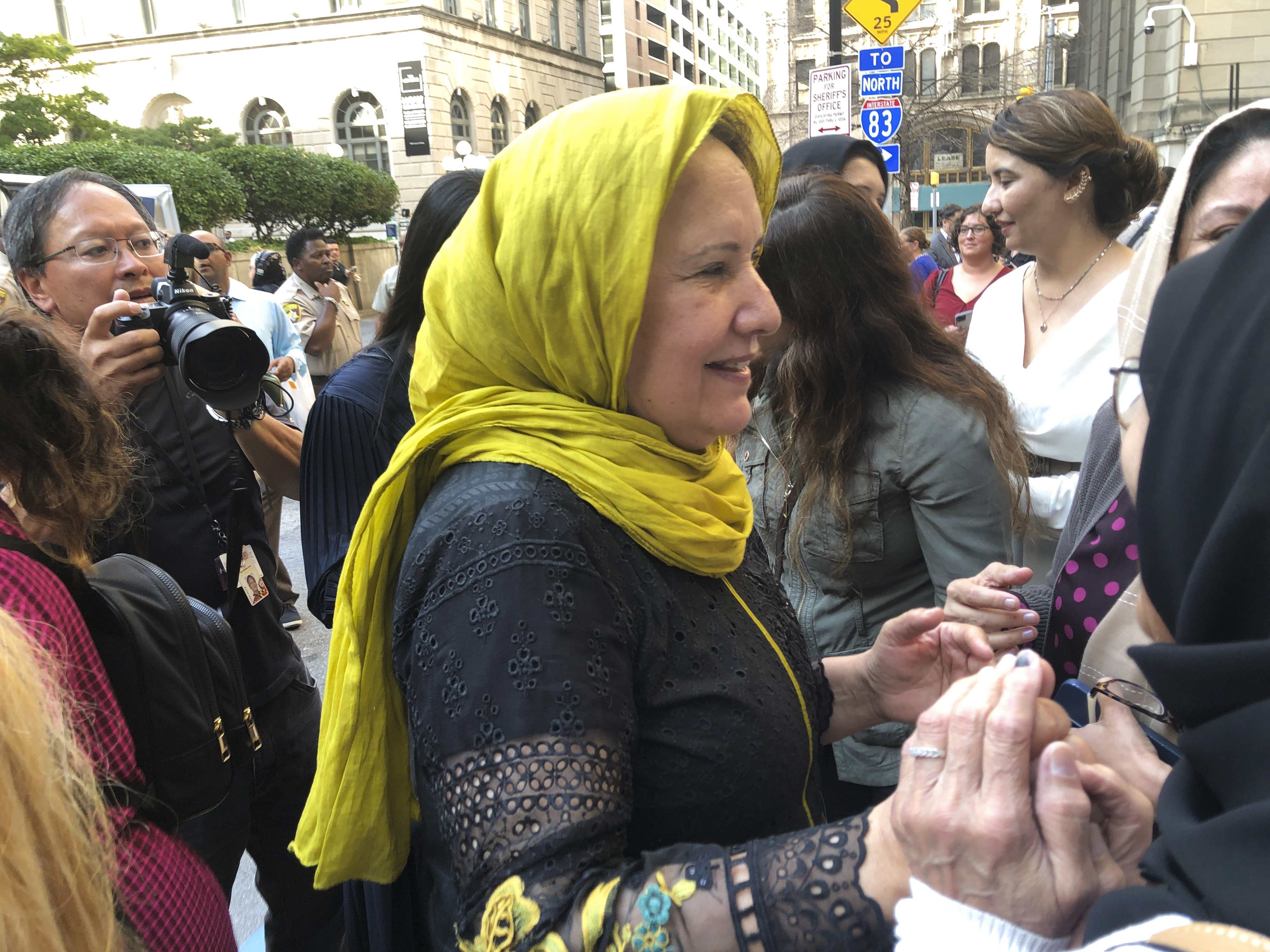 Shamim Syed, Adnan Syed's mother, celebrates with others outside the Cummings Courthouse, Monday, Sept. 19, 2022, in Baltimore. A judge has ordered the release of Adnan Syed after overturning his conviction for a 1999 murder that was chronicled in the hit podcast “Serial.” (AP Photo/Brian Witte) 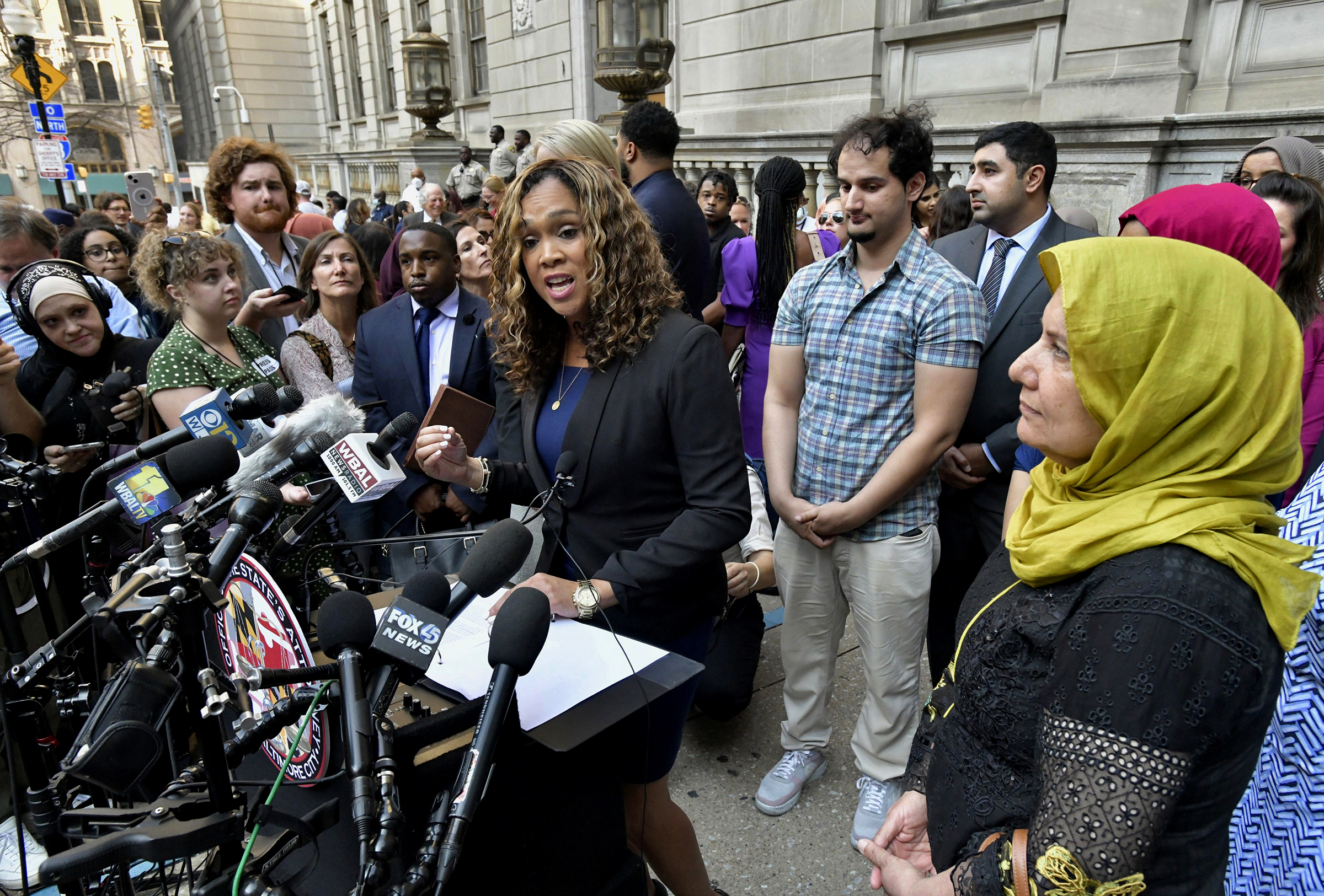 State’s Attorney Marilyn Mosby discusses the release of Adnan Syed after his conviction was overturned, as Syed's mother, Shamim Syed, right, looks on with another son, standing behind Mosby, Monday, Sept. 19, 2022, in Baltimore. (Amy Davis/The Baltimore Sun via AP) 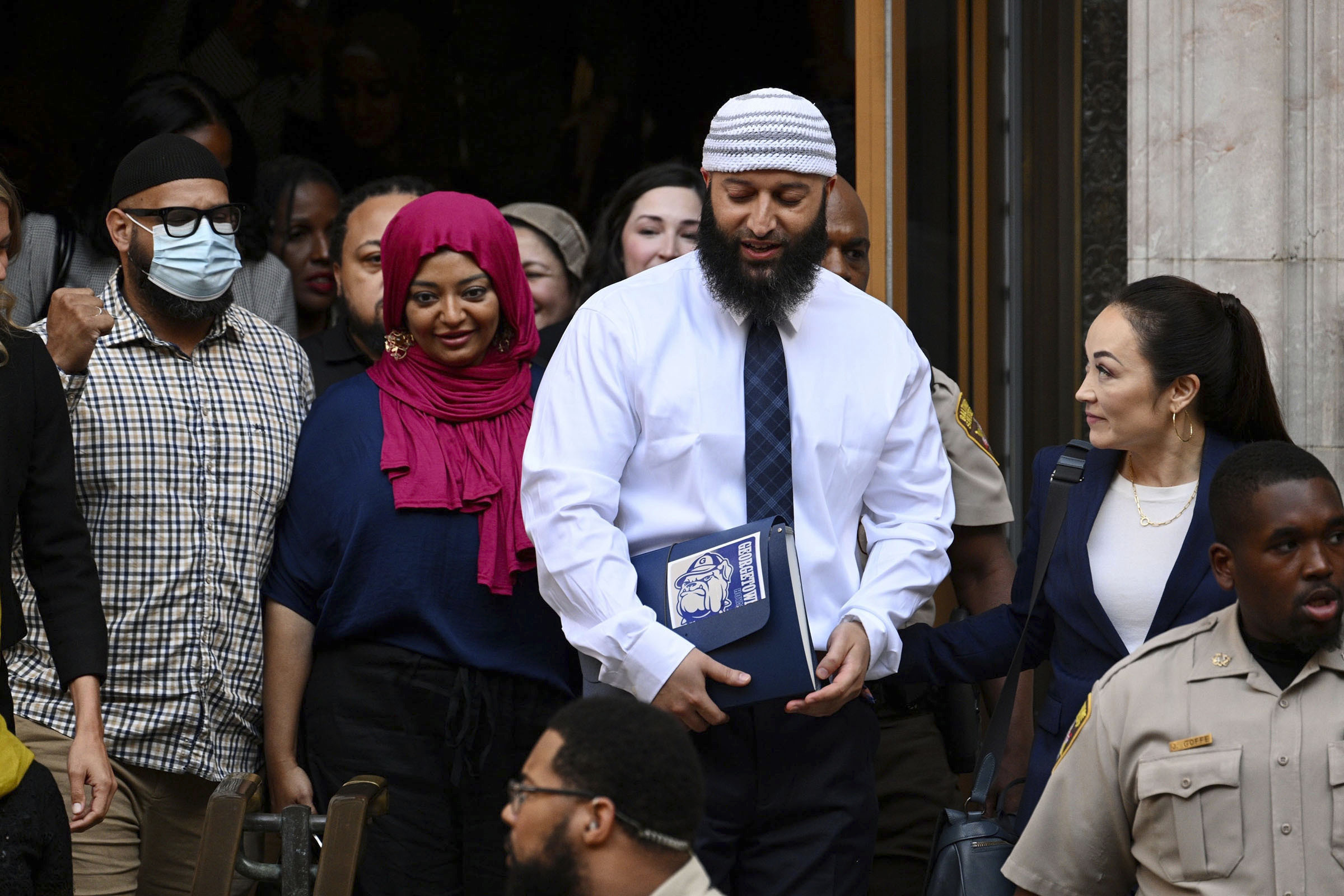 Adnan Syed, center right, leaves the courthouse after the hearing, Monday, Sept. 19, 2022, in Baltimore. A Baltimore judge on Monday ordered the release of Syed after overturning his conviction for the 1999 murder of high school student Hae Min Lee — a case that was chronicled in the hit podcast “Serial,” a true-crime series that transfixed listeners and revolutionized the genre. (Jerry Jackson/The Baltimore Sun via AP)