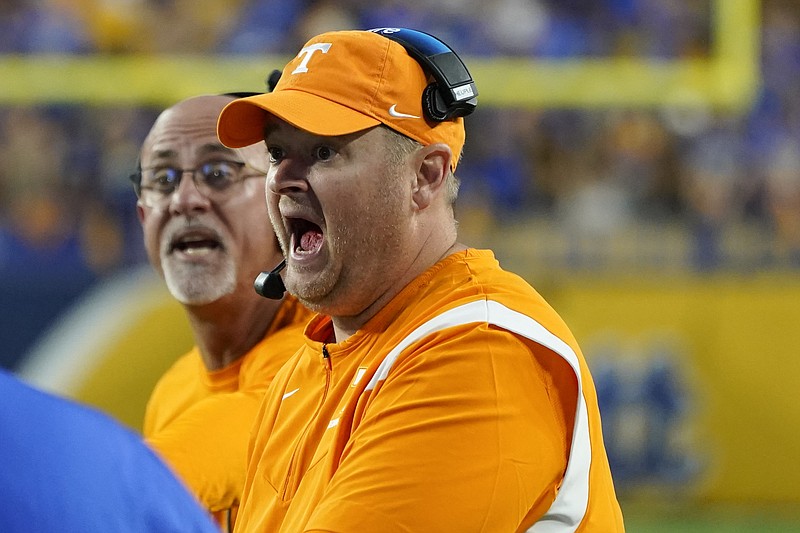 Tennessee head coach Josh Heupel yells to an official after Pittsburgh wide receiver Jared Wayne (5) made a catch along the sideline that was ruled a catch during overtime of an NCAA college football game, Saturday, Sept. 10, 2022, in Pittsburgh. After review, the catch call was overturned. Tennessee won 34-27 in overtime. (AP Photo/Keith Srakocic)

If you want to break through at the top level of college football, it's essential to have skilled players, an established culture and time to get both.

Still, year after year, fans, boosters and administrators expect their team to celebrate a title, no matter how young the program is -- even in the rugged Southeastern Conference.

While No. 1 Georgia and No. 2 Alabama look like the clear favorites for the SEC title game, a group including No. 8 Kentucky, No. 10 Arkansas, No. 11 Tennessee and No. 16 Ole Miss have undefeated records and big goals.

"I think that's one of the things that helped create buy-in with our players," said Tennessee coach Josh Heupel, in his second season, "We have never set a ceiling on what we could or could not do."

And he's not the only one in the SEC.

Ole Miss and coach Lane Kiffin have used rushing and defense to start 3-0. The Rebels are second in the league with 243 yards rushing a game and fourth in yards allowed behind Alabama, Georgia and Kentucky.

The undefeated Razorbacks, who face No. 23 Texas A&M (2-1) on Saturday night, have taken on the tough-minded style of coach Sam Pittman, the former offensive line coach at Tennessee, Arkansas and Georgia before his hiring after the 2019 season.

Tennessee is the conference's top offensive team with more than 553 yards and 52 points a game.

The secret to moving up in the SEC? "Just playing our brand of football," Arkansas receiver Matt Landers said.

Ex-Florida and South Carolina coach Steve Spurrier agrees. It's important to have the top players, he said, but just as essential to have an established culture his teams can rely on each week and season after season.

Plus, "you've got to give guys you hire a little bit of time," said Spurrier, who led Florida to a national championship and six SEC titles and South Carolina to its only East Division title in 2010.

That's the path Kentucky has taken with Mark Stoops, who in his 10th season has surpassed Bear Bryant as the school's leader in coaching victories.

Stoops' team broke through to go 10-3 in 2018, his sixth season, yet trailed off to 8-5 and 5-6 the next two years, a drop that may have led some schools to clean house. The Wildcats, though, rebounded last year at 10-3 and are focused on bigger things this fall.

Part of Stoops success comes from patience among fans and school administrators, Spurrier said. Stoops said another is a focus on keeping young players engaged so they'll stick around and developed into playmakers instead of transferring.

"We get caught up with winning, which is ultimately most important," Stoops said. "But we can't forget about development and bringing those guys along."

Stoops' tenure is rare on many SEC campuses. Nine of the 14 league schools have changed coaches the past three seasons.

Danielson said that while other Power Five leagues might have two or three teams expecting titles, there are six or seven SEC schools who could change coaches "if they're not NCAA potential playoff teams."

In the current four-team College Football Playoff format, that makes it difficult for all but the very best teams in the SEC to compete for a national title. That will change, Danielson believes, when the CFP moves to 12 teams, as announced earlier this year.

Winning 10 games will likely be good enough to get additional SEC teams into at-large berths in the expanded playoffs, Danielson said.

Beamer was disappointed with the Bulldogs loss. But in the aftermath, the recruits and their families who attended raved about the stadium's atmosphere.

"That's all they could talk about, thankfully, and not the results on the field," he said with smile.

Nothing outpaces having NFL-caliber talent on your sidelines. Texas A&M, Alabama and defending national champion Georgia were 1-2-3 in this past season's recruiting cycle, according to 247sports.com.

There are seven SEC teams among the top 16 in 247sports' 2023 recruiting ranking s with Alabama leading the way. For programs at the back of the pack, like the Gamecocks, Missouri and Vanderbilt, that's the way up.

"I do think if you're not getting three to five top-three round NFL draft picks like LSU, Alabama and Georgia are getting, you have to be somewhat more unique," Danielson said.

Arkansas coach Sam Pittman talks to his team during a time out against Missouri State during the first half of an NCAA college football game Saturday, Sept. 17, 2022, in Fayetteville, Ark. (AP Photo/Michael Woods)

Kentucky head coach Mark Stoops talks with an official during the first half of an NCAA college football game against Youngstown State in Lexington, Ky., Saturday, Sept. 17, 2022. (AP Photo/Michael Clubb) 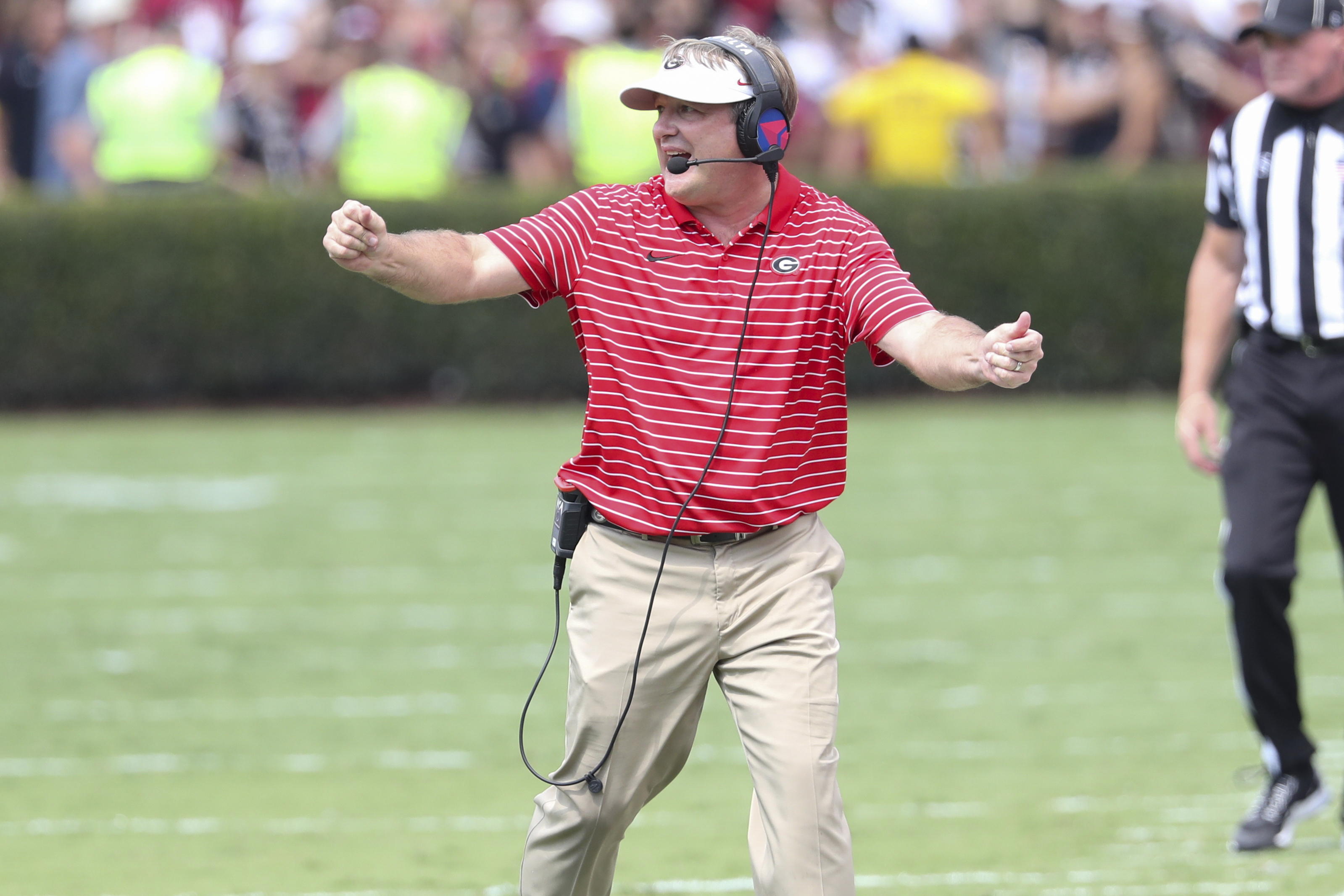 Georgia head coach Kirby Smart is happy about a first down conversion during the first half of an NCAA college football game against South Carolina on Saturday, Sept. 17, 2022, in Columbia, S.C. (AP Photo/Artie Walker Jr.)