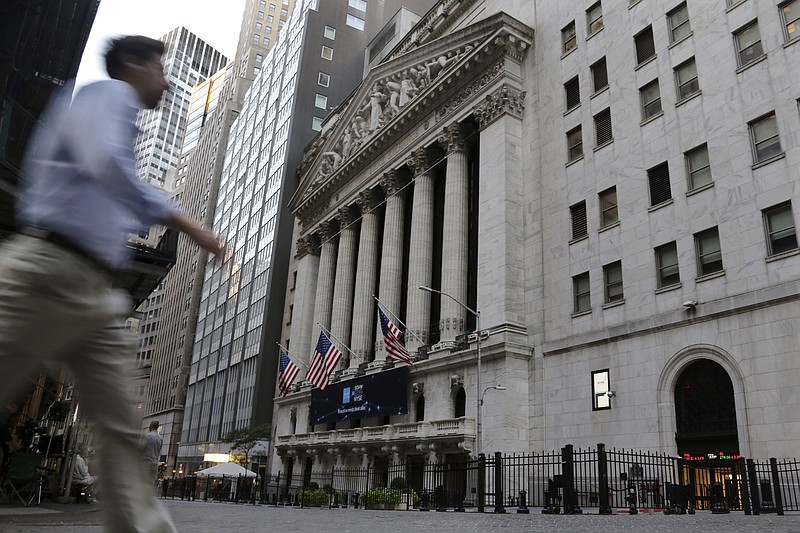 A man walks past the New York Stock Exchange, Wednesday, Sept. 21, 2022, in New York. Stocks are off to a modestly higher start on Wall Street ahead of a widely expected interest rate increase by the Federal Reserve. The S&amp;P 500 was up half a percent in the early going Wednesday, as was the Dow Jones Industrial Average. (AP Photo/Peter Morgan)

Stocks closed lower Wednesday after the Federal Reserve made another big interest rate hike and sharply increased its outlook for how high it expects to raise rates in coming months.

Short-term Treasury yields pushed further into multiyear highs after the central bank raised its benchmark rate by three-quarters of a point. The Fed also said it now expects that rate to be a full percentage point higher by the end of the year than it had predicted in June.

"We have got to get inflation behind us," Fed Chair Jerome Powell said during a press conference. "I wish there were a painless way to do that. There isn't."

The S&P 500 fell 1.7% to its lowest level since mid-July after wavering between gains and losses as traders considered the impact of the Fed's update on interest rates, which have widespread effects on markets and the economy.

The Dow Jones Industrial Average also fell 1.7% after flipping between gains and losses. The Nasdaq composite lost 1.8%. The major indexes are on pace for their fifth weekly loss in six weeks.

The Fed is raising rates to fight the worst inflation in 40 years. The worry is that the Fed may cause a recession by slowing the economy too much.

"Ultimately, the policy appears to be appropriate given the economic backdrop, but investors should prepare for rough seas ahead as aggressive Fed policy usually leaves a path of destruction in the wake behind," said Charlie Ripley, senior investment strategist at Allianz Investment Management.

The broader market has been lurching between gains and losses throughout the week ahead of the latest update on interest rates from the Fed.

More than 90% of the stocks in the S&P 500 fell, with retailers, banks and technology companies among the heaviest weights on the benchmark index. Amazon dropped 3%, Bank of America shed 3% and Apple fell 2%.

The Fed has been raising rates aggressively to try and tame high prices on everything from food to clothing.

During his press conference, Powell stressed his resolve to lift rates high enough to slow the economy and drive inflation back toward the central bank's 2% goal. Powell said the Fed has just started to get to that level with this most recent increase.

The central bank's latest rate hike lifted its benchmark rate, which affects many consumer and business loans, to a range of 3% to 3.25%, the highest level in 14 years, and up from zero at the start of the year.

"The Fed is pivoting, but not in the direction that many hoped for," said Willie Delwiche, investment strategist at All Star Charts. "Not only are they indicating that rates will be higher for longer but they expect to persist even as the economy slows more dramatically remains weaker longer than they were expecting as recently as June."

The Fed's goal is to slow economic growth and cool inflation, but Wall Street is worried that it could hit the brakes too hard on an already slowing economy and cause a recession. Those concerns have been reinforced by reports showing that inflation remains stubbornly high and statements from Fed officials they will keep raising rates until they are sure inflation is coming under control.

Central banks worldwide are also dealing with inflation. The Bank of Japan began a two-day monetary policy meeting Wednesday, although analysts expect the central bank to stick to its easy monetary policy. Rate decisions from Norway, Switzerland and the Bank of England are next. Sweden surprised economists this week with a full-point hike.

Global tensions remain high as Russia's invasion of Ukraine continues. Russian-controlled regions of eastern and southern Ukraine have announced plans to start voting this week to become part of Russia. The war has killed thousands of people, driven up food prices worldwide and caused energy costs to soar.

Gasoline prices, which helped fuel inflation for months, have been generally falling. But, the average price for a gallon of gas went up for the first time in more than three months, rising to to $3.681 from $3.674, according to motor club AAA. 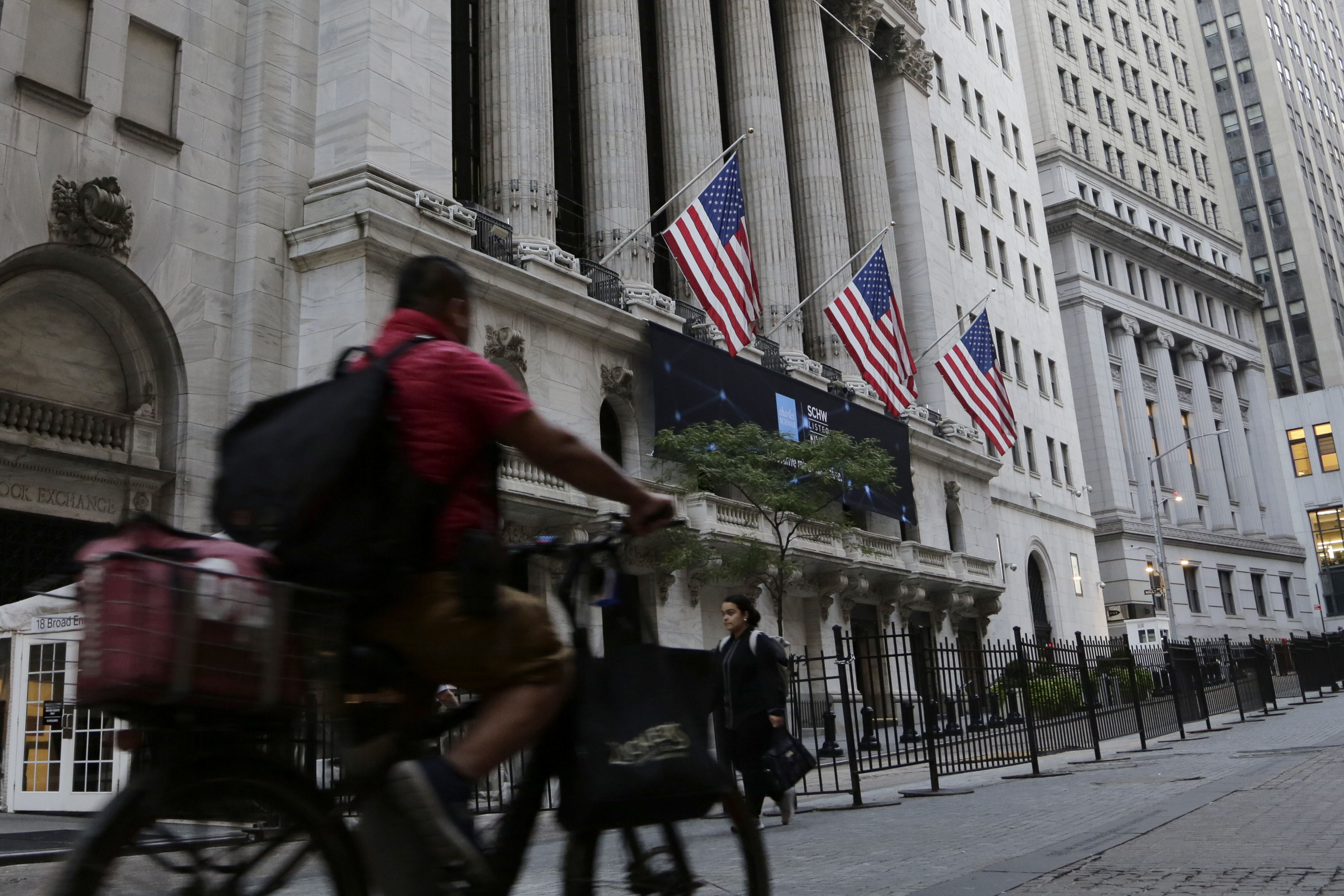 A man bikes past the New York Stock Exchange, Wednesday, Sept. 21, 2022, in New York. Stocks are off to a modestly higher start on Wall Street ahead of a widely expected interest rate increase by the Federal Reserve. The S&P 500 was up half a percent in the early going Wednesday, as was the Dow Jones Industrial Average. (AP Photo/Peter Morgan) 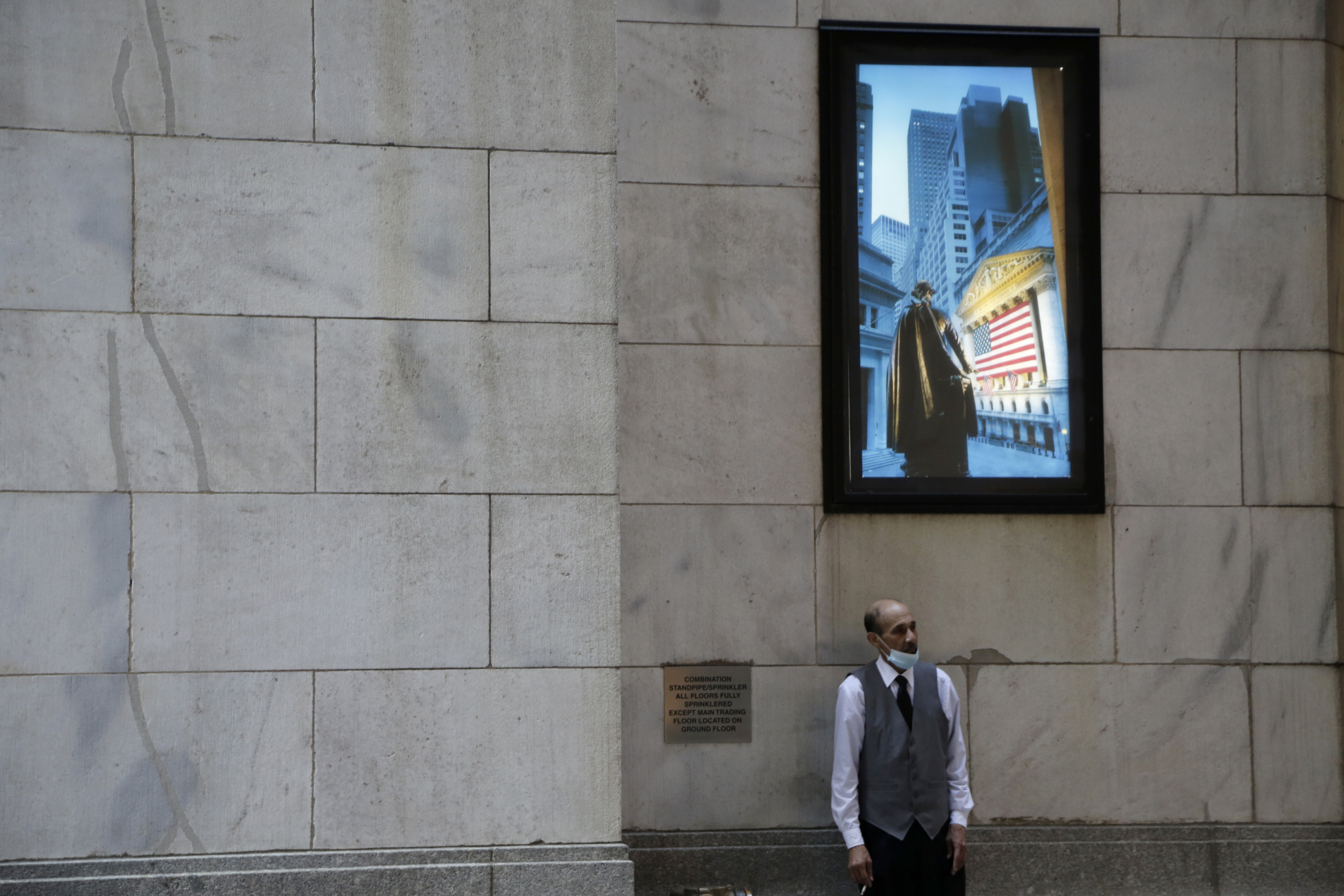 A man pauses outside the New York Stock Exchange, Wednesday, Sept. 21, 2022, in New York. Stocks are off to a modestly higher start on Wall Street ahead of a widely expected interest rate increase by the Federal Reserve. The S&P 500 was up half a percent in the early going Wednesday, as was the Dow Jones Industrial Average. (AP Photo/Peter Morgan)