WITH POLL | U.S. Department of Ed: 365,600 Arkansans can receive break on student loans under Biden plan 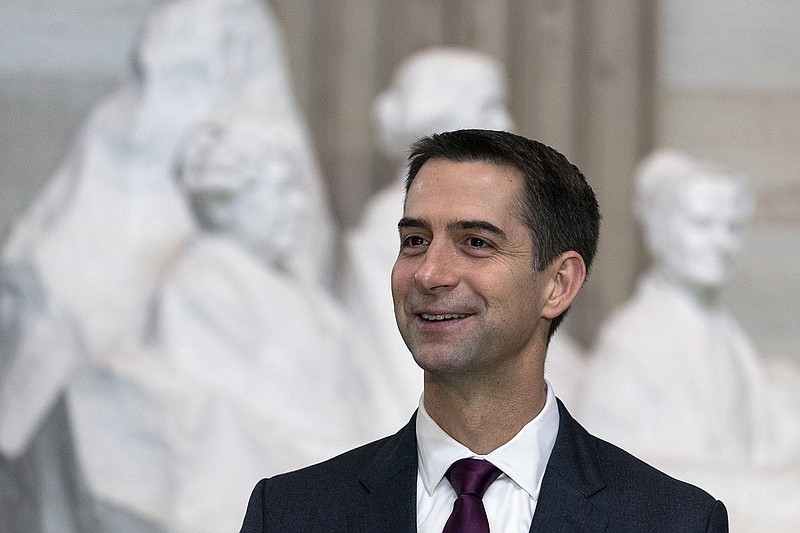 U.S. Sen. Tom Cotton, seen in July in Washington, announced on Tuesday, Sept. 20, 2022, proposed legislation that would require colleges to become guarantors of up to 50% of future federal student loans and fine colleges 25% of the value of future defaulted loans. (AP/Pool/Alex Brandon)

More than 350,000 Arkansans can receive at least some student loan debt forgiveness under a plan announced last month by President Joe Biden, according to state-by-state data released by the U.S. Department of Education and White House on Tuesday.

On the same day as the update, U.S. Sen. Tom Cotton, R-Ark., announced proposed legislation that would require colleges to become guarantors of up to 50% of future federal student loans and fine colleges 25% of the value of future defaulted loans.

Cotton is among the critics of Biden's plan for student-loan forgiveness, which the president announced Aug. 24.

Pell Grants are typically awarded by the U.S. Department of Education to undergraduates with exceptional financial needs and which usually doesn't need to be repaid. Individuals who earn less than $125,000 annually are eligible, and, nationwide, nearly 90% of relief funds will go to those earning less than $75,000 per year.

That 365,600 figure "looks reasonable," said Tony Williams, director of the Arkansas Student Loan Authority, a division of the Arkansas Department of Commerce. "It's hard to say exactly what is accurate, but that number looks good."

Nationally, more than 43 million people have federal student loan debt in the U.S., with the average debt roughly $37,000 per borrower, according to the Education Data Initiative, a group that provides research and resources on higher education in the United States. The outstanding federal loan balance is about $1.6 trillion in the U.S.

"Overall, there's over $13 billion in student debt in Arkansas," with borrowers carrying an average of $33,000 in student loan debt, Williams said last month. "Students borrow about $600 million in federal loans in Arkansas annually."

For the 3,845 graduates of the University of Arkansas, Fayetteville's class of 2021, 1,750 students, or 46%, used federal loans, with an average borrowed amount of $20,961, according to the university. UA is by far the state's largest school, with estimated fall enrollment this year of nearly 31,000.

Since Biden announced his plan last month, "we've been receiving a higher volume of calls than normal asking about loan forgiveness, but we have limited information we can share," Williams said. "We have a pretty good understanding of what the plan will entail, but we don't know all the details, so we're asking people to be patient."

The U.S. Department of Education said Tuesday it will release "in the coming weeks" additional details on how individuals across the country can benefit from the Administration's student debt relief plan, pointing to a website -- StudentAid.gov/debtrelief -- that would have more information.

As many as 8 million borrowers may be eligible to receive relief automatically because relevant income data is already available to the U.S. Department of Education.

Others will have to apply, and the application page should be online early next month, according to the U.S. Department of Education. To be notified when the application is open, the federal agency asked people to sign up online at https://www.ed.gov/subscriptions.

Once a borrower completes the application, they can expect relief within four-six weeks, and borrowers are encouraged to apply by Nov. 15 in order to receive relief before the current payment pause expires at the end of this year, according to the U.S. Department of Education. However, the U.S. Department of Education said it will continue to process applications as they are received, even after the pause expires on Dec. 31.

Borrowers who have elected to continue making payments during the current pause can also apply for refunds, according to the U.S. Department of Education. Borrowers can get a refund without even applying if their payments brought their loan balance below the maximum debt relief amount -- $10,000 for all borrowers, $20,000 for Pell Grant recipients -- and they can verify their balances through their studentaid.gov account.

Those who have debts above those thresholds, as well as those who completely paid off their debts during the pause, can apply for refunds by calling their specific loan providers and are encouraged to do so by Dec. 31, according to the Department of Education. Student aid account dashboards have that information for those unsure of their loan providers.

The bill would force any university -- excluding religious and medical colleges -- charging over $20,000 a year for undergraduate tuition to gradually eliminate 50% of their administrative staff to qualify for future student loans, according to a news release from the senator's office.

The bill would penalize universities up to 25% of a borrower's loan for every one of their students who defaults on student loans, place a luxury tax of 20% on annual undergraduate tuition fees above $40,000 -- again, excluding religious and medical colleges -- with the funds raised being used for workforce training, and require universities to "implement admission and hiring policies that protect political and ideological diversity on campus," among other stipulations.

"America does have a student loan problem, but it's not the problem Joe Biden wants you to believe it is. The real issue with student debt today is that the cost of college tuition has skyrocketed, yet the value of a college diploma has plummeted," Cotton said in a statement.

"What's worse is the federal government created this problem by writing blank checks to colleges, with little effort to control the cost or quality of higher education. My Student Loan Reform Act of 2022 would end this academic Gilded Age, reduce the cost of tuition, and give colleges a much-needed reality check."

The full text of the bill can be found online at https://bit.ly/3UrYhDV.

"We have not yet had time to fully review [Cotton's] proposed bill," but the University of Arkansas System "takes pride and great care in keeping tuition rates as affordable and accessible as possible to everyone," said Nate Hinkel, director of communications for the UA System.

"[We] have not yet had time to review the specifics or consider any potential unintended impacts" of the bill, said Mark Rushing, associate vice chancellor, university relations, at UA-Fayetteville.