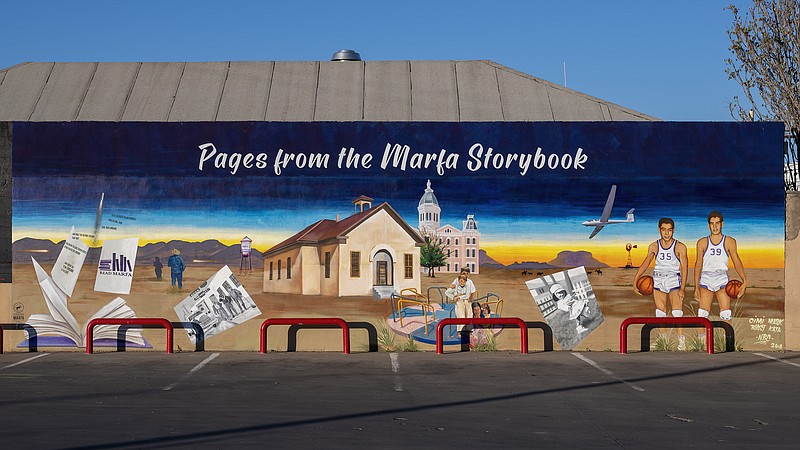 "Pages from the Marfa Storybook," a mural commissioned by the Blackwell School Alliance for the community in Marfa, Texas. (David Pillow/Dreamstime/TNS)

Once signed by President Joe Biden, the act is intended to preserve and honor the history of the half-acre site in West Texas, advocates say, where generations of Hispanic children received a segregated education from their white peers.

Mario Rivera, a Blackwell School alumnus and founding board member of the Blackwell School Alliance, said in a press release the site speaks to a segregation experience "that was common in schools and many aspects of daily life in Texas and other border areas, yet is now forgotten."

The Blackwell School Alliance along with the National Parks Conservation Association advocated for the status for years.

Built in 1909, the Blackwell School was established to teach elementary Mexican American students in a town where the majority of the population was Hispanic, according to the Blackwell School website. Often called "Mexican schools," the system of segregating Hispanic children in schools was common across Texas during the time period.

The students were told to speak only English while on campus. According to a story on the Blackwell School's website, Spanish words written on slips of paper were buried on the grounds in a mock funeral ceremony during school.

"They were told to bury their native language and leave it behind. They were threatened with punishments if they disobeyed," said Theresa Pierno, chief executive of the NPCA, in the press release.

The school was underfunded, using secondhand books and furniture from the white school across town, and corporal punishment was common for speaking Spanish, according to the NPCA.

The school closed in 1965 when Marfa Schools integrated. The building was vacant until the Blackwell School Alliance worked to open it as a historic site and museum in 2006. Once part a larger campus, the original adobe three-room structure is all that remains today.

Pierno said site could be one of the first national park sites "to honor Latino history."

The bill was introduced in 2020 by former Texas Reps. Will Hurd, a San Antonio Republican, and Filemón Vela, a Brownsville Democrat, and was supported by Rep. Tony Gonzales, a San Antonio Republican; Sen. John Cornyn, R-Texas; and Sen. Alex Padilla, D-Calif. Congress' vote comes during Hispanic Heritage Month, celebrated from Sept. 15 through Oct. 15.

Rivera said the site commemorates racial justice advances and the lives and achievements of its students, while also remembering injustice experienced there.

"The lessons taught here can help us understand discrimination and racism," he said in the press release. "And better equip us to fight back against those forces in the present."