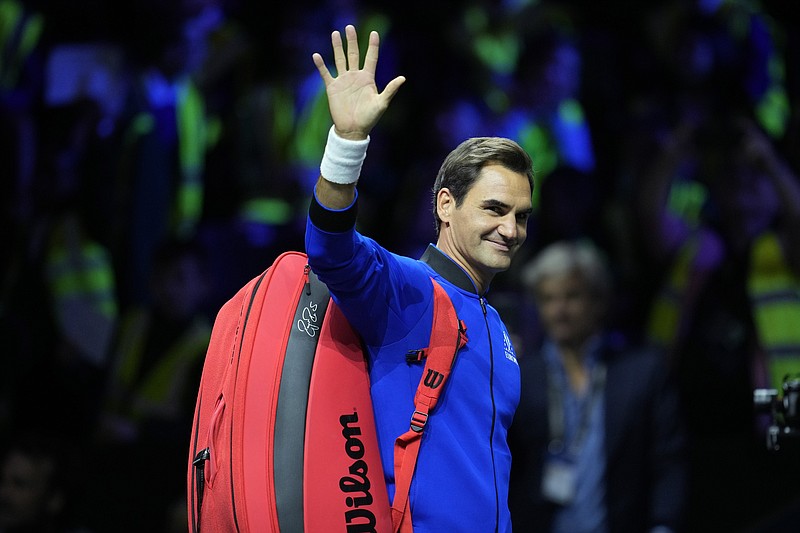 Switzerland's Roger Federer, waves during a training session ahead of the Laver Cup tennis tournament at the O2 in London, Thursday, Sept. 22, 2022. (AP Photo/Kin Cheung)

LONDON (AP) -- Roger Federer was paying attention right along with everybody else when Serena Williams played what is expected to be her last match three weeks ago at the U.S. Open.

"Not surprised. Just very similar to me, in many ways. We were expecting it to come at some point," Federer told The Associated Press. "You don't ever want players like Serena to ever retire. ... I just thought, 'What a great career.'"

He recognizes that their back-to-back exits after about a quarter-century each in tennis -- he is 41 and leaves with 20 Grand Slam titles and she turns 41 on Monday and has 23 major singles championships -- will spur some fans to move on from the sport.

Federer insists, though, that plenty will stick around.

"I mean, look, it's going to leave some fans with not the same taste for the game. We might lose some, because they say, 'OK, well that chapter for me closes, and I'll move on to another sport or another athlete,'" Federer said in an interview Wednesday at the Laver Cup, where the final match of his stellar career will be in doubles alongside rival Rafael Nadal for Team Europe on Friday night.

"And some will stay with the game forever, because tennis is just a sport (that), once you're in it, you're normally in it. That's why I don't believe a lot of people will leave," he continued. "But they will not maybe wake up at 3 in the morning anymore for the Australian Open. Or they might not use their vacation time to go travel to a place. Maybe they say for a few years, 'OK, let me go with a friend of mine and do a good adventure trip somewhere,' until they find their way back in."

He and Williams -- along with Nadal, a 36-year-old who has a men's-record 22 Slam titles, and Novak Djokovic, a 35-year-old with 21 titles -- helped create a golden era in the sport, drawing new viewers and inspiring new players.

"Serena and Roger probably have more fans than anybody in tennis," said Taylor Fritz, a 24-year-old Californian who is the highest-ranked American man at No. 12 and a part of Team World in London. "It's tough to replace two people as iconic as them, but I still think there is a lot of exciting times ahead."

Still, what happens after they leave?

"These two players are irreplaceable. I don't think there is any question about that," said John McEnroe, who won seven major trophies from 1979 to 1984. He added this caveat: "The sport goes on, no matter what, and we have witnessed that in every sport over time."

Which is why Federer is among those optimistic about the future.

"I'm a big believer, always, that tennis is bigger than anybody," he said, "and it will always create new superstars."

Federer thinks highlight-reel shots that make their way around on social media can help. So can the telling of each new top player's "captivating story."

McEnroe mentioned the sport's need to do better marketing of fresh faces.

Someone Federer believes could fit the "superstar" category is Carlos Alcaraz, the 19-year-old from Spain who won the U.S. Open and became the youngest man at No. 1 in the history of the ATP computerized rankings, which date to 1973.

Federer watched -- on TV -- some of Alcaraz's epic quarterfinal in Flushing Meadows against Jannik Sinner, a 21-year-old from Italy. It lasted 5 hours, 15 minutes, ending at 2:50 a.m. in New York -- that's 8:50 a.m. in Federer's home country of Switzerland, so the father of two sets of twins missed the fifth set, he explained, "because I had to bring the kids to school."

He came away impressed by both players.

"Super movers. Great ball-strikers, forehand and backhand," Federer said. "And I always said it: The best movers are the best players. We've seen it with Novak, we've seen it with Rafa, we've seen it with myself, Lleyton (Hewitt). You name it. ... And because you cover the court so, so well, you end up giving yourself more time and less stress."

Alcaraz's all-court ability has been likened, albeit in a it's-far-too-early-to-put-their-names-in-the-same-sentence sort of way, to that of Federer.

Federer did not dismiss the comparison.

"He has great power with his forehand. And that sets up everything for him. In this sense, when you can do that, like I did, you can then decide, 'Shall I drop shot? Shall I hit it big? Shall I hit it big again? Or should I actually go for the angle? Or should I come in?'" explained Federer, whose first Grand Slam title came at 21. "My problem when I was younger -- and I don't think I was nearly as good as him at his age -- is, for me, it was so hard which decision to take. He seems to have more clarity. He's stronger mentally. He's worked harder. You can see his body; if you look at our two bodies, we were different guys. He's got a lot that is already going in a really good direction. Then it's just a matter of powering through, plowing through." 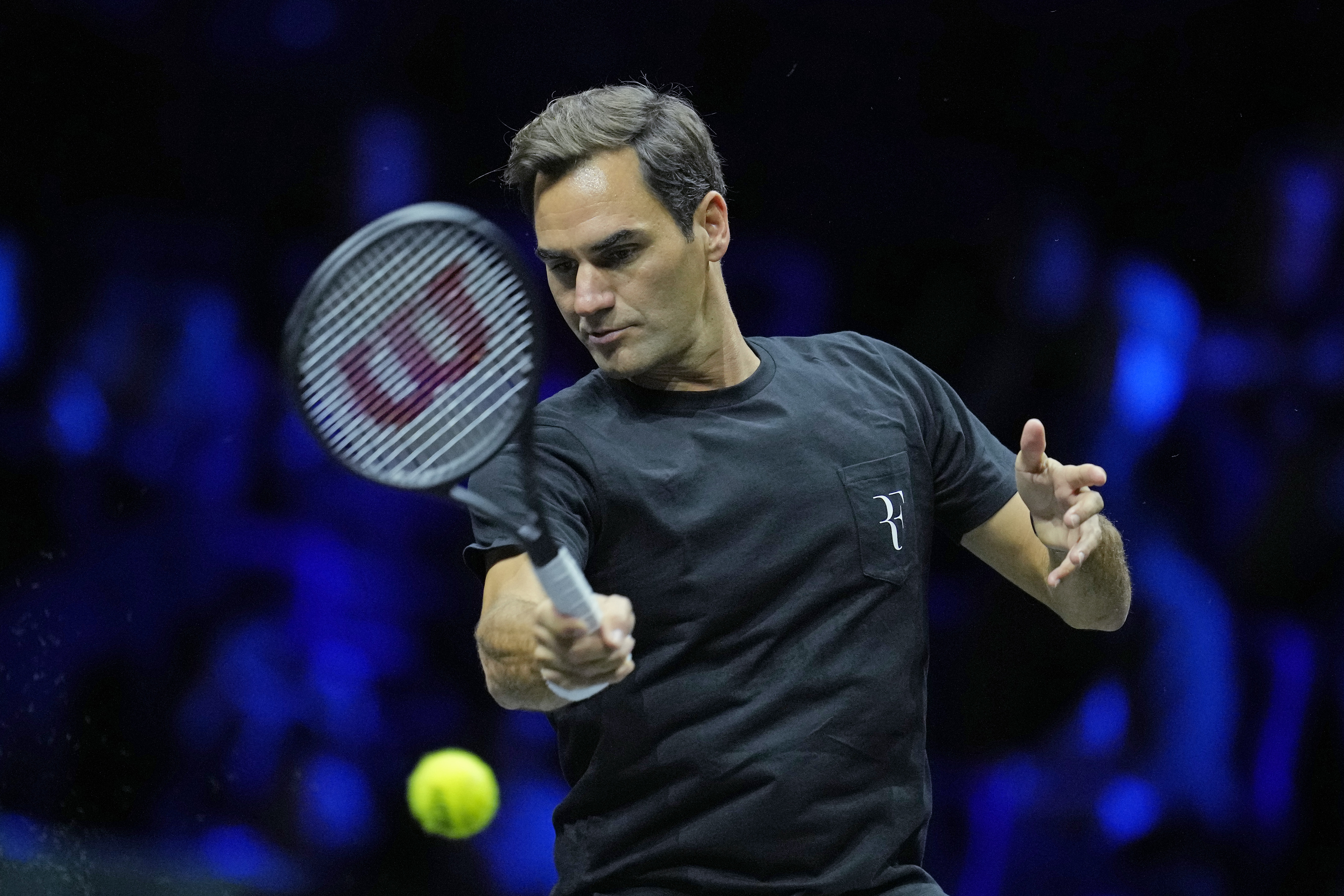 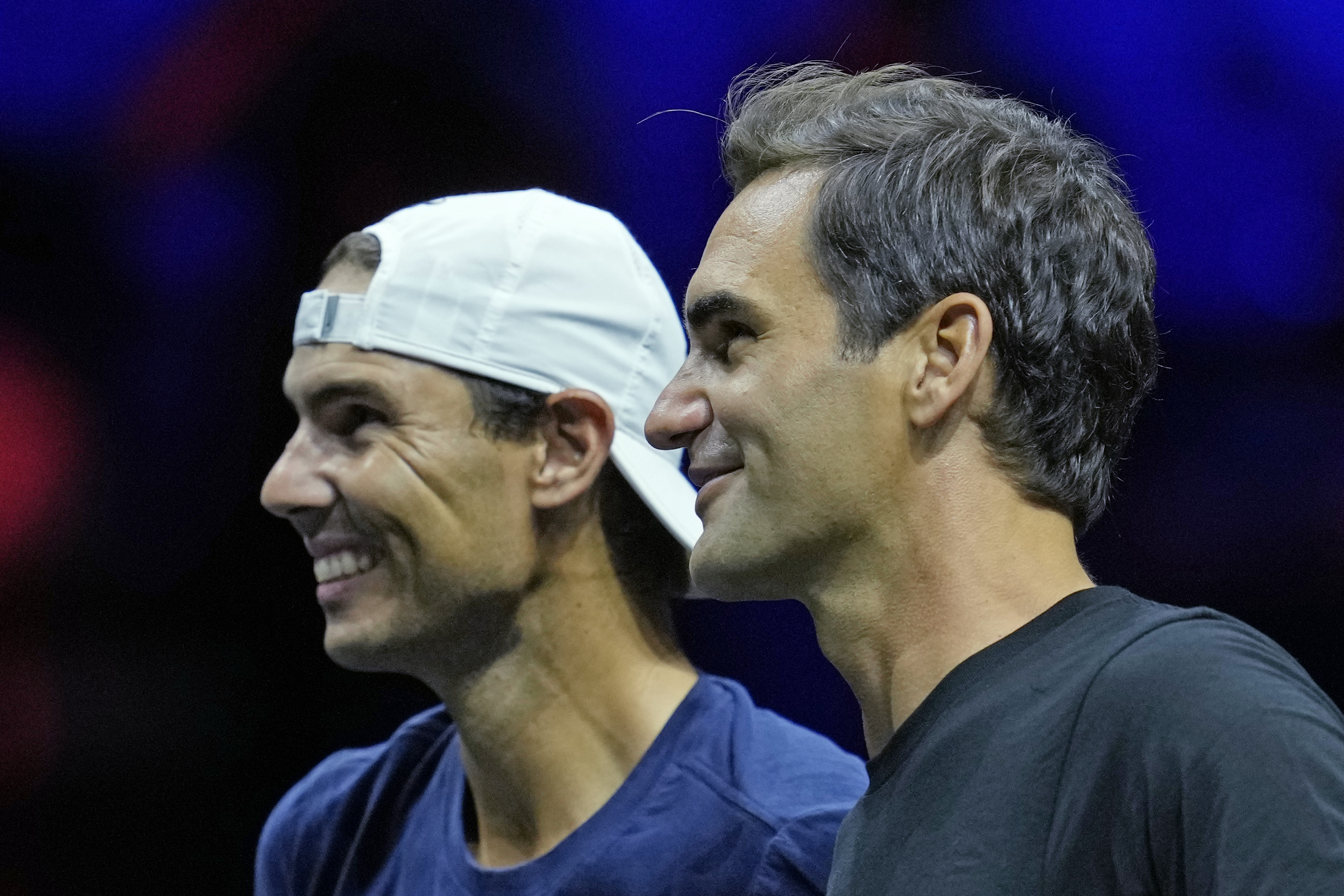 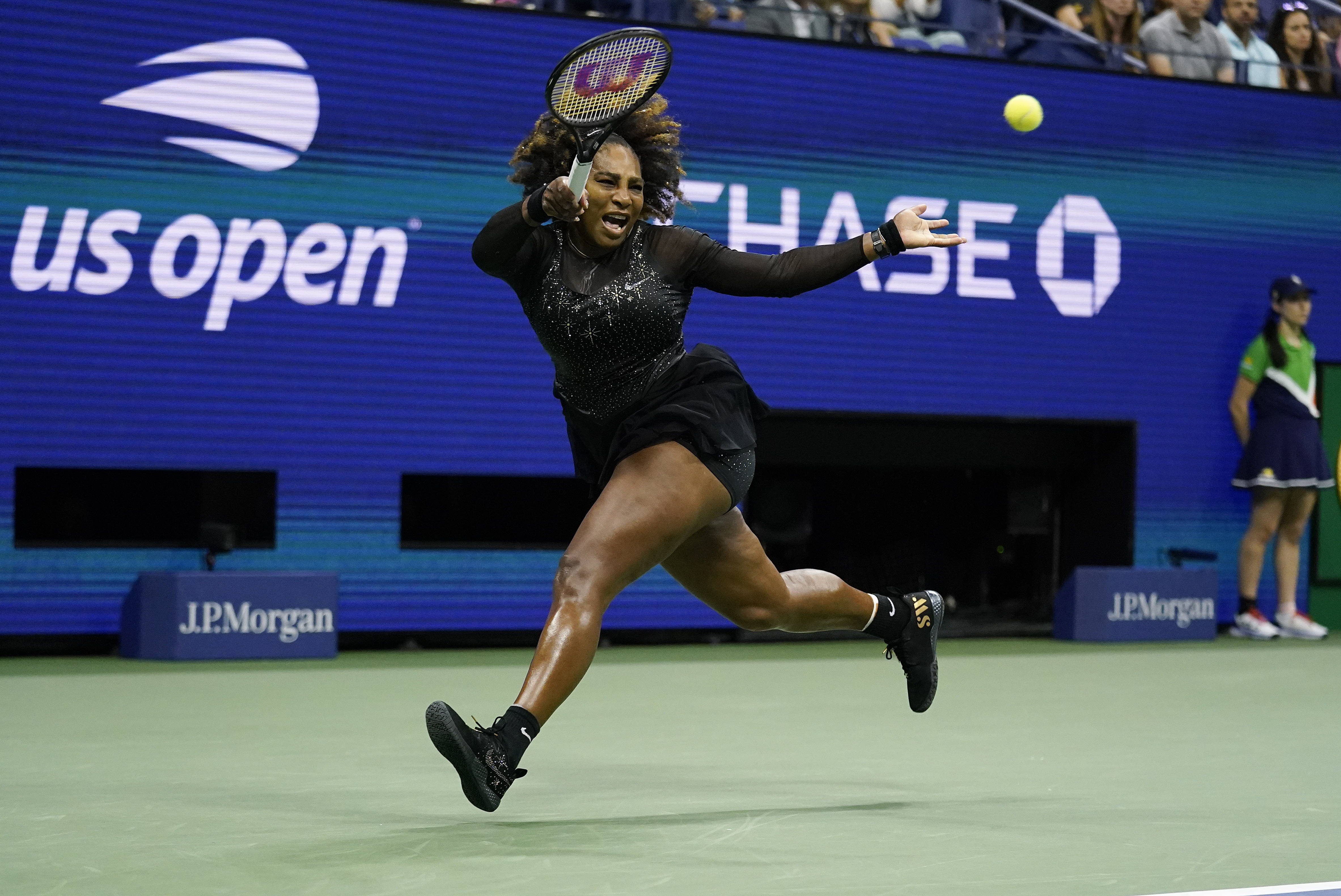 FILE - Serena Williams, of the United States, returns a shot to Ajla Tomljanovic, of Australia, during the third round of the U.S. Open tennis championships, Friday, Sept. 2, 2022, in New York. It could have been just one night, but Williams' exit from tennis turned into a boon for ESPN. Williams' third-round defeat at the hands of Ajla Tomljanovic had the largest audience of any tennis match in ESPN's 43-year history, beating the 3.9 million who watched the 2012 Wimbledon men's final between Roger Federer and Andy Murray. (AP Photo/Charles Krupa, File) 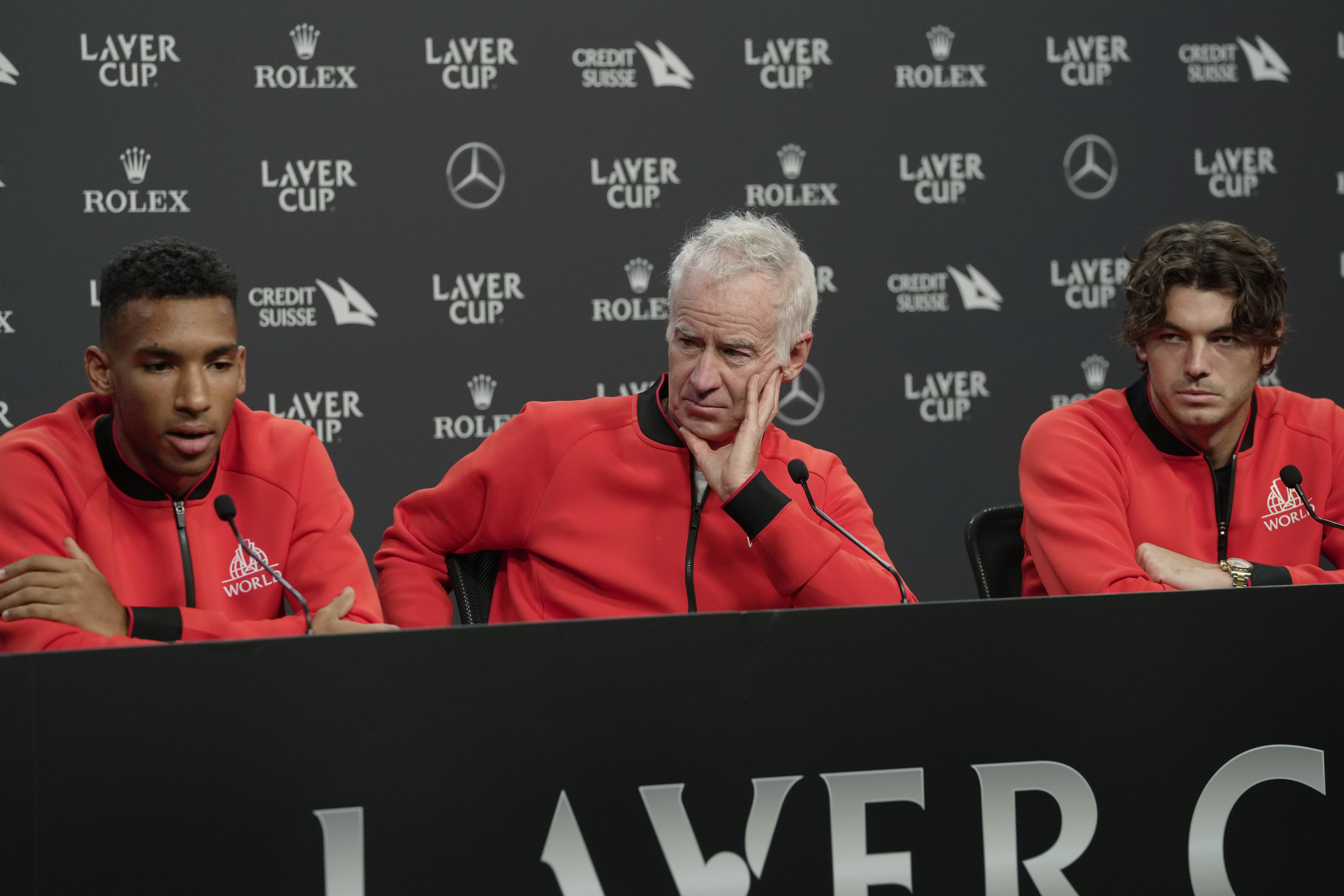 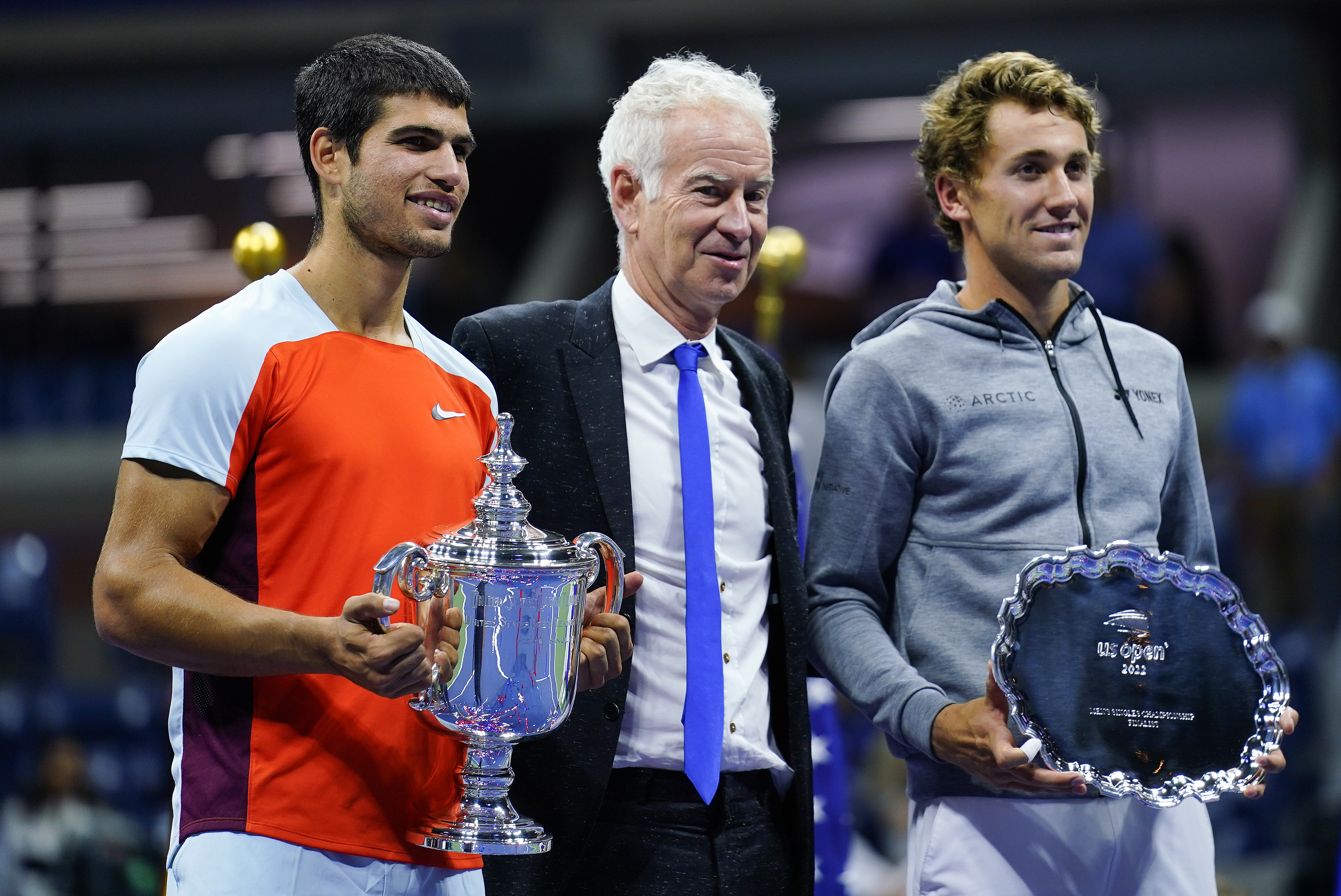 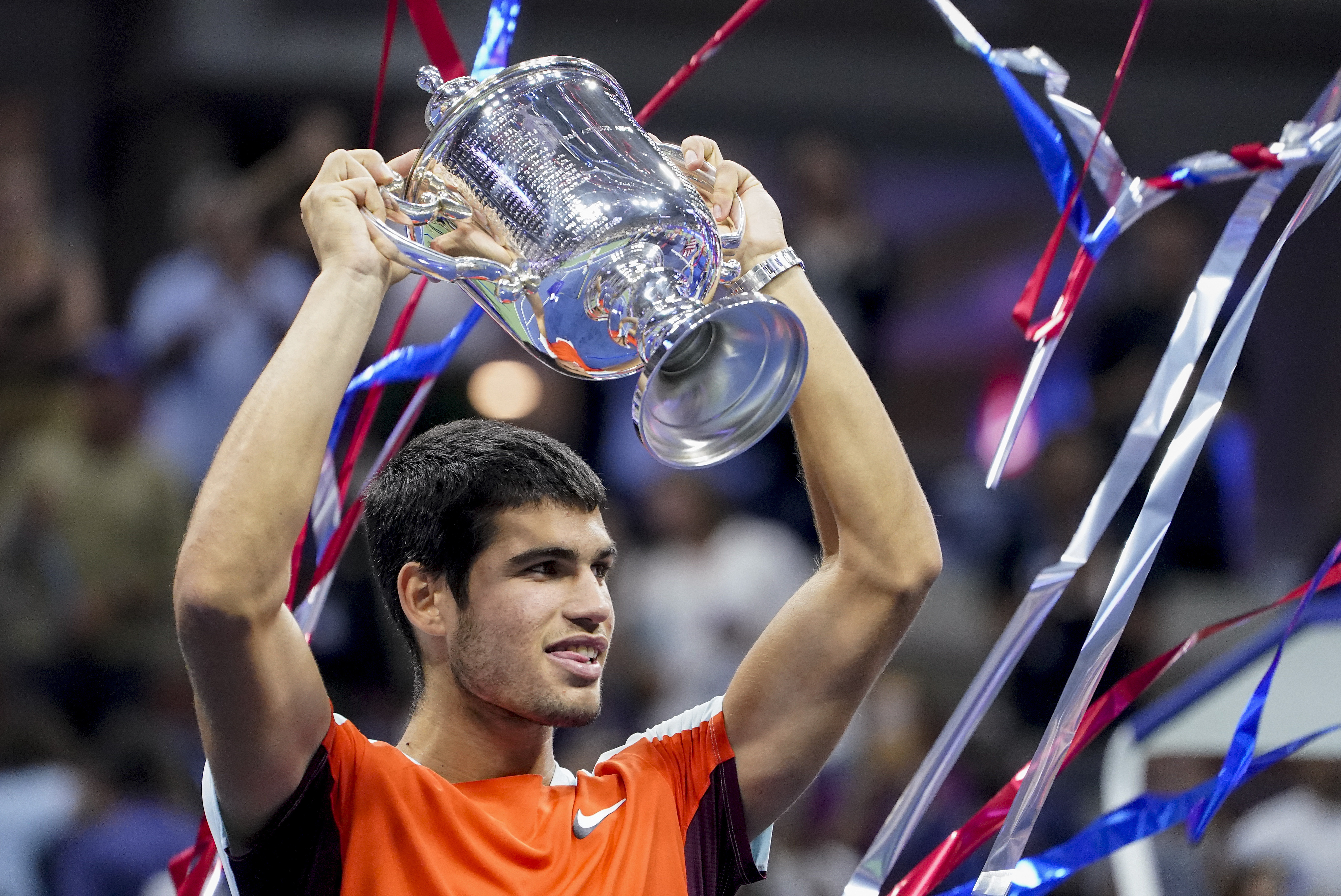