This week in 1973: Vice President Spiro Agnew stated that the worst of Watergate was over; West Point announced it was ending the tradition of giving the silent treatment to honor code violators; and a singer/musician from Knoxville, Tennessee, was enjoying the success of the first of his two hit records.

Red Kirk was born in 1925 in Knoxville, Tennessee. His family moved out in the country when he was 9 years old.

In the meantime, he had taught himself to play steel guitar but three years later be switched to playing a "straight guitar" – as he called it.

He served in the U.S. Army during World War II and after being discharged, played on WNOX Knoxville's Mid Day Merry-Go-Round and Tennessee Barn Dance. He spent three years as a member of Archie Campbell's touring show but his vocals, which sounded much like Eddy Arnold, led to a tour and work on radio and television in various markets including Dayton, Lexington and Louisville. He also played on WLS National Barn Dance in Chicago, the Big "D" Jamboree in Dallas and the Louisiana Hayride in Shreveport and made guest appearances on the Grand Ole Opry in Nashville. He made his first recordings for Mercury in 1949, along with session musicians that included Jerry Byrd (steel guitar) and Tommy Jackson (fiddle). He later recorded for ABC-Paramount Records, Starday, Dewitt and Great. A compilation of Mercury Records was later reissued on an album by a German label in 1988.

According to Red, getting his first recording contract was the easiest thing he ever did.

He said, "I had only been in the music business a couple of years when Hank Williams hit with "Lovesick Blues." I learned the song from Hank's record and began singing it in clubs where I was playing. Mercury Record A&R man Murray Nash heard me and came to me after the show and asked me if I'd like to record for Mercury Records. I asked him "Where do I sign?" and that's how it happened. Mercury Records wanted a cover of "Lovesick Blues" and I was it. 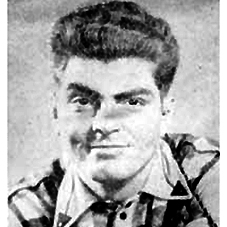 Print Headline: NOW THERE WAS A SONG | Getting a recording contract was a snap for this singer