Review: Is ‘Don’t Worry Darling’ worth all the drama? 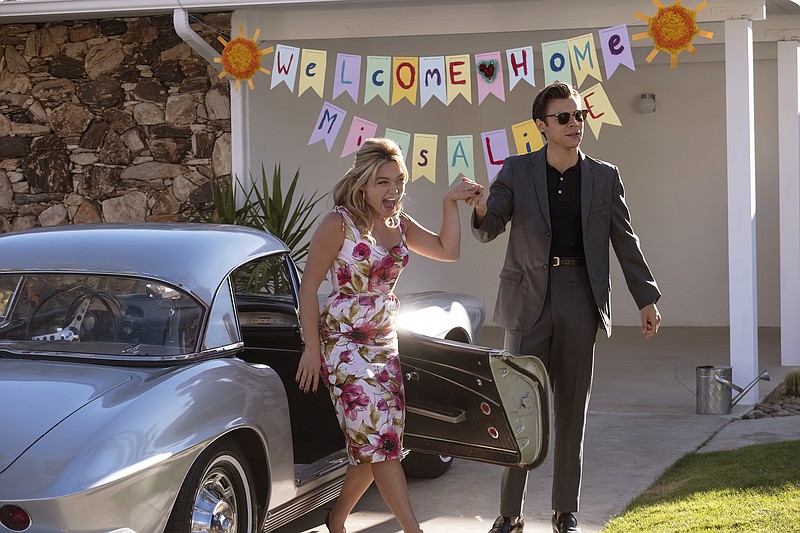 Somewhere around when TikTok videos were analyzing, with the intensity of the Zapruder film, whether spit flew at the Venice Film Festival premiere of Olivia Wilde's "Don't Worry Darling," it became clear that the melodrama of the movie's promotional tour had easily eclipsed the movie, itself.

The tabloid frenzy that engulfed "Don't Worry Darling" was so public, so out in the open that it quickly passed into something kind of exhausting. I would definitely rather re-watch "Don't Worry Darling" the movie than replay that media storm. But in some ways, the on-screen and off-screen dramas go hand-in-hand. Like that fraught Venice debut, Wilde's movie, set in a Palm Springs fantasy world, brings together beautiful faces in a sunny, fashionable locale with the possibility of sinister doings afoot.

"Don't Worry Darling," now in theaters, takes a kind of "Stepford Wives" or "Truman Show" concept and reorients it with a potent #MeToo lens. All the ingredients are here for a powerful dystopic drama: Wilde, an ascendant filmmaker coming off her terrific debut, the 2019 teen comedy "Booksmart"; Florence Pugh, one of the most electric young actors working in film today; Harry Style's pop presence; and some sensational mid-century modern production design thanks to Richard Neutra's Kaufmann Desert House.

Yet for all its promise, "Don't Worry Darling" at every twist and turn lacks the right balance of suspense. Wilde, working from a script by Katie Silberman, conjures a kind of '50s-style utopia in which the young married couple Alice (Pugh) and Jack Kramden (Styles) live on a picturesque cul-de-sac. Every morning the devoted housewives kiss their suit-clad husbands goodbye before they drive off to a mysterious dirt mountain in the desert to do whatever keeps this strange male fantasy humming.

At least since Shirley Jackson's "The Lottery," marrying routine and ritual with ominous cracks in a social facade has been a fine foundation for conspiratorial thrillers of all kinds, from "The Twilight Zone" to "Get Out." And though it's a compelling starting framework for "Don't Worry Darling," every little revelation is bluntly over-the-top, sapping the movie of any mystery. The town is named Victory and its only Black resident is a traumatized woman (KiKi Layne) who shouts "Why are we here?" before quickly being disappeared. No more subtle is the town's cult-like leader, Frank (Chris Pine, smoothly devious), preaching about keeping "chaos" at bay.

But it's still easy enough to go along with the film because, well, Pugh. If her devotion to the film has been uncertain during its release, Pugh's commitment to the role is far harder to question. It's often riveting following her increasingly paranoid psychology as Alice's growing suspicions cause her to doubt everything, maybe even her own seemingly perfect husband.

For a while, "Don't Worry Darling" seems to be an almost perfect Hollywood embodiment of the King Princess song, "1950." ("I like it when we play 1950.") Pugh and Styles have a glamorous chemistry together, even if their codified gender roles -- Alice greets him at the end of the day at the front door with a cocktail in hand -- are increasingly dubious. Style's performance, along with his in the upcoming "My Policeman, " hint at real possibility for him as a movie star of cryptic allure.

"Don't Worry Darling" is ultimately neither worthy of all the off-screen fuss nor quite the on-screen disappointment it's been made out to be. It's a promising but clunky thriller that feels to me like it's mistaken two acts for three, overly drawing out the portentous set-up and leaving off the story, after its big twist ending, just as it's getting interesting.

"Don't Worry Darling," a Warner Bros. release, is rated R by the Motion Picture Association of America for sexuality, violent content and language. Running time: 123 minutes. Two and a half stars out of four.

Print Headline: Review: Is ‘Don’t Worry Darling’ worth all the drama?