Sonny on other side: Big change for TCU-SMU rivalry in DFW 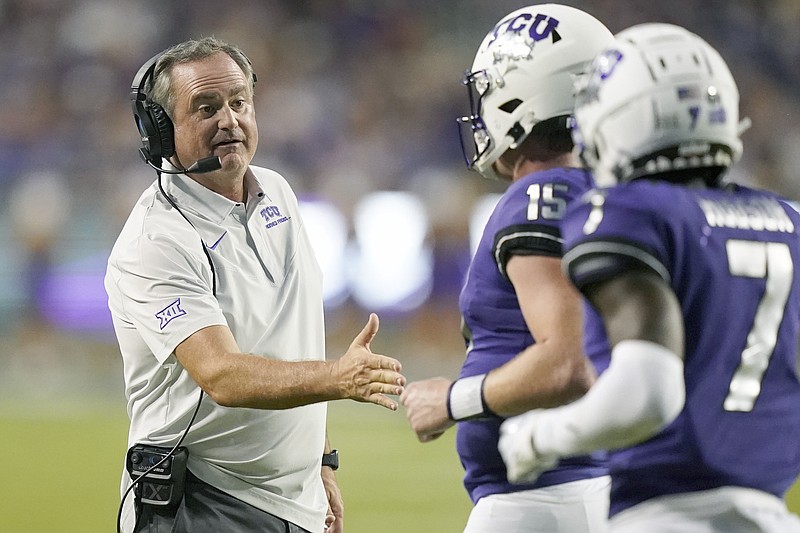 FILE - TCU coach Sonny Dykes, left, congratulates quarterback Max Duggan (15) after a touchdown during the first half of the team's NCAA college football game against Tarleton State in Fort Worth, Texas, Sept. 10, 2022. Dykes will be back in Dallas on Saturday, on the visiting sideline when TCU plays there for the first time since 2018. The game was sold out days in advance, a nod to the recent success in the series for SMU and the return of the former coach that home fans will certainly boo for leaving them at the end of last season. (AP Photo/LM Otero, File)

FORT WORTH, Texas -- Sonny Dykes is now on the other side of the SMU-TCU rivalry, a 100-game series reinvigorated by two wins he had with the Mustangs before moving to become coach of the Big 12 program on the opposite end of the Dallas-Fort Worth metroplex.

Those wins with Dykes in the last two meetings marked SMU's first back-to-back victories over the Horned Frogs since 1992-93, when the schools located just more than 40 miles apart were still together in the old Southwest Conference.

Dykes will be back in Dallas on Saturday, on the visiting sideline when the Horned Frogs (2-0) play there for the first time since 2018. The game was sold out days in advance, a nod to the recent success in the series for SMU (2-1) and the return of the former coach home fans almost certainly will boo for leaving them at the end of last season.

"That's the way it ought to be. Fans are cheering for their team this year, and what happened last year doesn't really matter," Dykes said. "If I bought a ticket to the game, I'd boo me, too."

SMU receiver Rashee Rice made headlines going into last year's DFW rivalry game when he said "no one comes to Texas for Fort Worth" and insinuated that TCU was afraid to play the Mustangs after the 2020 game scheduled for Dallas got canceled during the COVID-19 pandemic. Rice went to high school near Fort Worth, but TCU didn't offer him a scholarship.

Now the national leader with 163.7 yards receiving per game, Rice this week bypassed the chance for more trash talk. He instead said TCU has a "pretty good defense" and that he looked forward to playing against his old coaching staff.

New SMU coach Rhett Lashlee, the offensive coordinator for Dykes there in 2018-19, began this week by talking to his players about being passionate but not emotional.

Quarterback Tanner Mordecai got the message.

"The emotions will be high and all of that, but that stuff wears off throughout the game," said Mordecai, the former Oklahoma transfer already with 10 passing TDs after 39 last year for Dykes in his first season starting. "It's just going to be about competing and executing our game plan, and do what we're supposed to do."

The Mustangs had lost seven in a row against TCU, and 17 of 19 in the series, before those last two meetings. Now Dykes will try to get a win against so many of the players he recruited to help end the skid.

"A lot of those players chose to come to SMU because of a relationship, and the relationship is real," Dykes said. "And you care about them and you love them and you invest in them, and they invest in you. And there's a bond and a trust that develops."

Dykes likened his departure to players leaving in the transfer portal, when he was disappointed but understood if they thought it was doing to be beneficial for them.

Before last week's open date, the Frogs won their first two games to make Dykes the first new TCU coach since Dutch Meyer in 1934 to start 2-0.

There was a postgame scuffle following the Mustangs' 42-34 victory last year in the 100th meeting when SMU players, including Rice, unsuccessfully tried to plant one of their school flags on the midfield logo at TCU's stadium, where they had also won 41-38 in 2019. Dykes apologized in his postgame comments.

Several days later, then-TCU coach Gary Patterson was still upset and said Jerry Kill, then a special assistant in an off-field role, had sustained a concussion when he got knocked down in the fracas.

Patterson and TCU mutually agreed to part ways five weeks later with a 3-5 record in his 21st season as coach. The Frogs split their final four games with Kill as interim head coach before Dykes became only the second person to be head coach at both schools.

Dykes was 30-18 the last four seasons with the Mustangs. That was the most successful stretch for SMU since its return to play in 1989 after its program was the only one ever shut down by the NCAA's so-called death penalty.

"I think he needs to be appreciated for what he did here," Lashlee said. "I don't like playing friends, but at the end of the day, it's about the players, it's about SMU-TCU. It's not about Sonny, it's not about me." 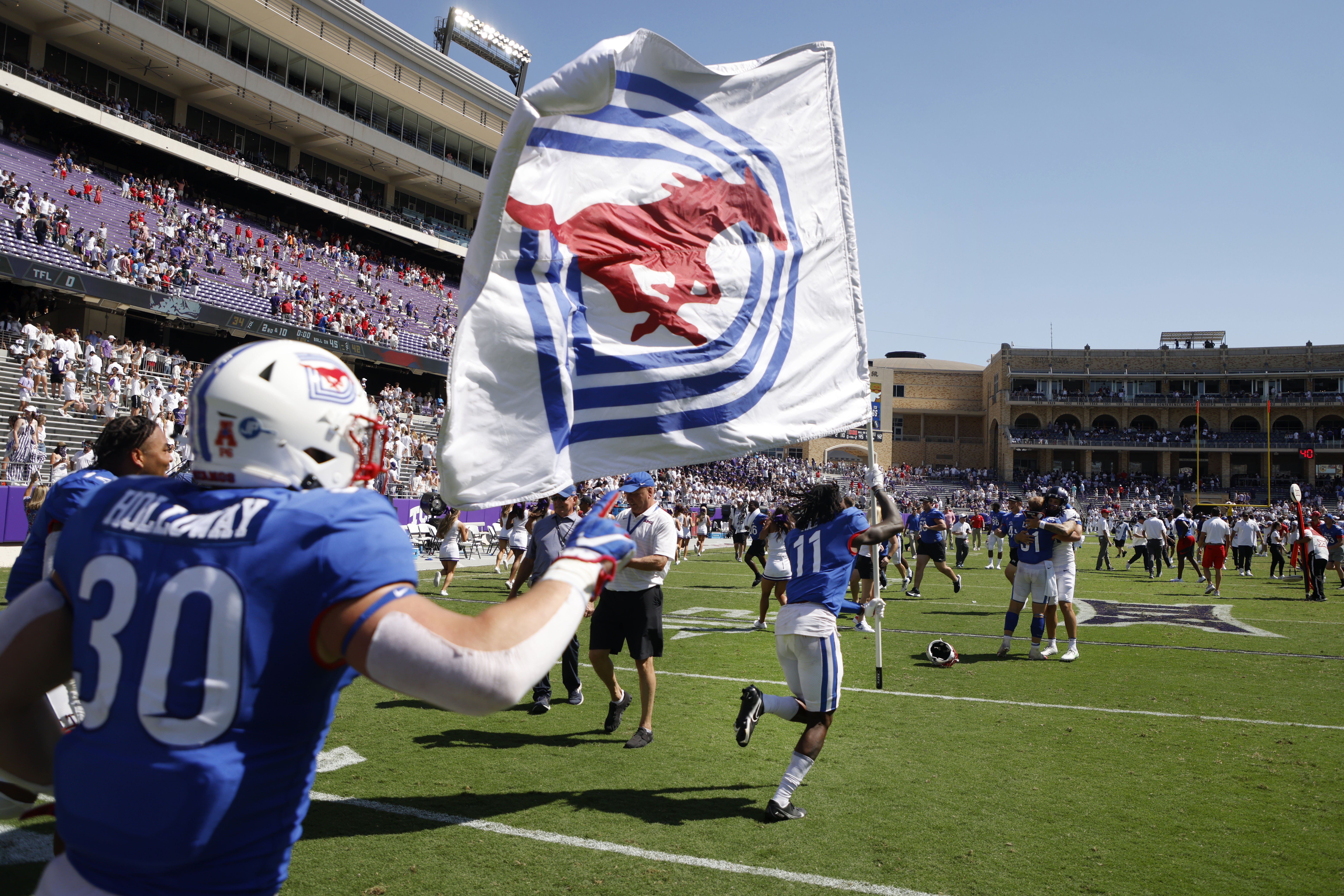 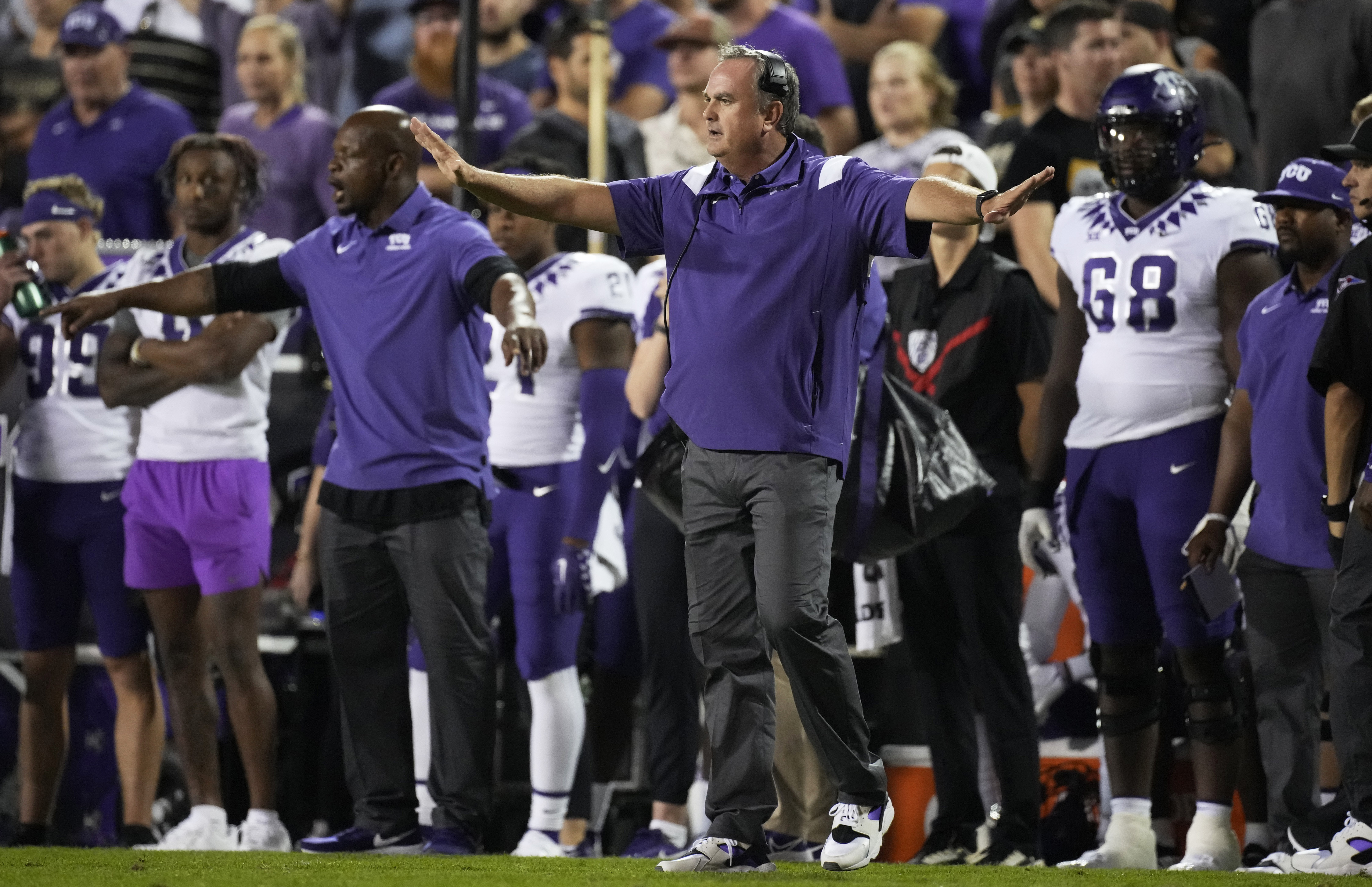 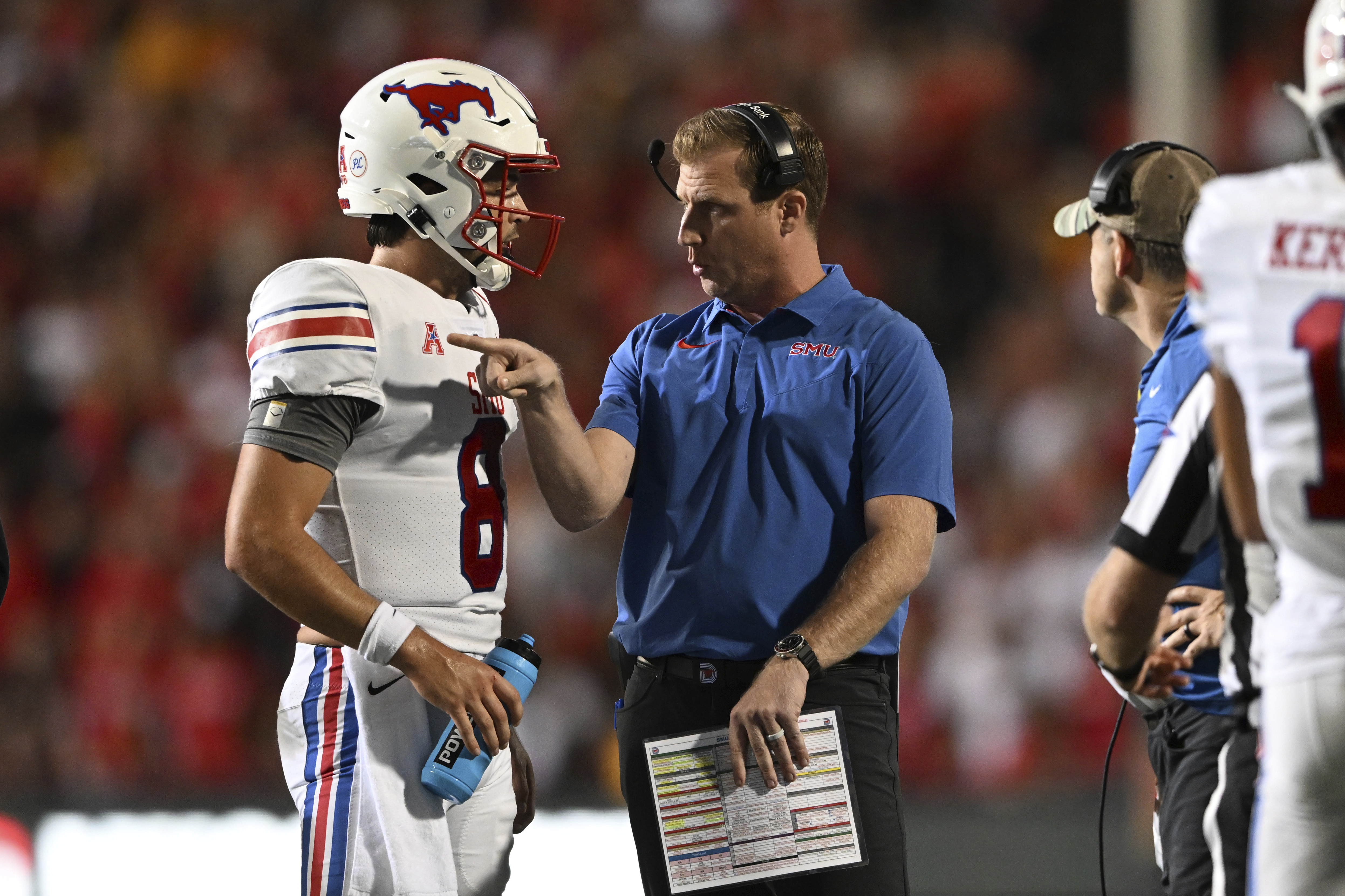 Print Headline: Sonny on other side: Big change for TCU-SMU rivalry in DFW