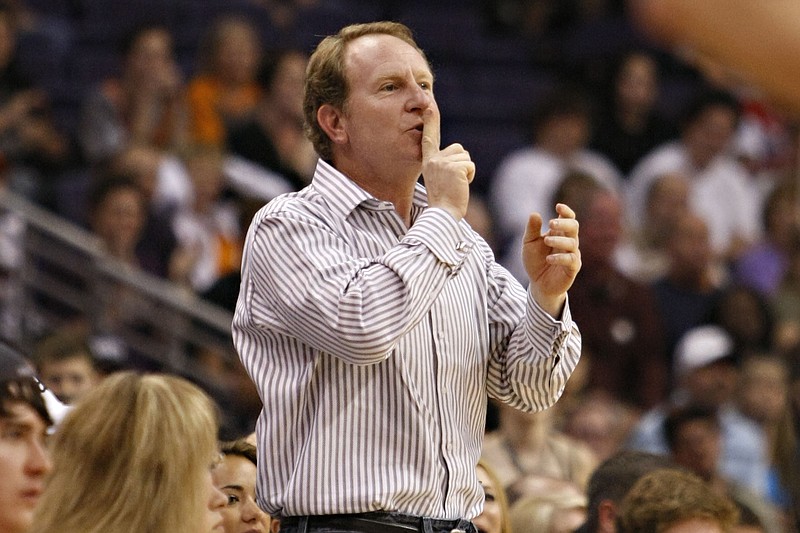 FILE - Phoenix Suns owner Robert Sarver gestures to Indiana Pacers' Danny Granger after Granger missed a shot during the second half of an NBA basketball game Saturday, March 6, 2010 in Phoenix. Robert Sarver says he has started the process of selling the Phoenix Suns and Phoenix Mercury, a move that comes only eight days after he was suspended by the NBA over workplace misconduct including racist speech and hostile behavior toward employees. Sarver made the announcement Wednesday, Sept. 21, 2022, saying selling “is the best course of action.” He has owned the teams since 2004. (AP Photo/Matt York, File)

Robert Sarver says he has started the process of selling the Phoenix Suns and Phoenix Mercury, a move that came barely a week after he was suspended by the NBA over workplace misconduct that included racist speech and hostile behavior toward employees.

The decision was quickly applauded by many -- among them, NBA Commissioner Adam Silver, the National Basketball Players Association and even Sarver's partners in the ownership group that operates the Suns and Mercury.

Sarver made the announcement Wednesday, saying selling "is the best course of action," although he initially hoped he would be able to keep control of the franchises -- pointing to his record that, he claims, paints a dramatically different picture of who he is and what he stands for.

"But in our current unforgiving climate, it has become painfully clear that that is no longer possible -- that whatever good I have done, or could still do, is outweighed by things I have said in the past," Sarver wrote in a statement. "For those reasons, I am beginning the process of seeking buyers for the Suns and Mercury."

"This is the right next step for the organization and community," Silver said.

Sarver bought the teams in July 2004 for about $400 million -- then a record price for an NBA franchise. He is not the lone owner of the Suns and Mercury, but the primary one. Suns Legacy Partners LLC, the ownership group, said its work to create a "culture of respect and integrity" would continue.

"As we've shared with our employees, we acknowledge the courage of the people who came forward in this process to tell their stories and apologize to those hurt," the partners said.

Assuming no other team is sold in the interim, it would be the first sale in the NBA since a group led by Qualtrics co-founder Ryan Smith bought the Utah Jazz in 2021 for about $1.7 billion.

It's not known if Sarver has established an asking price. Forbes recently estimated the value of the Suns at $1.8 billion. Any new owners would have to be vetted by the NBA, which is standard procedure.

An independent report that was commissioned by the NBA last November -- following an ESPN report into Sarver's workplace conduct -- took about 10 months to complete. That probe found Sarver "repeated or purported to repeat the N-word on at least five occasions spanning his tenure with the Suns," though added that the investigation "makes no finding that Sarver used this racially insensitive language with the intent to demean or denigrate."

The study also concluded that Sarver used demeaning language toward female employees, including telling a pregnant employee that she would not be able to do her job after becoming a mother; making off-color comments and jokes about sex and anatomy; and yelling and cursing at employees in ways that would be considered bullying "under workplace standards."

Once that report was completed, Silver suspended Sarver for one year and fined him $10 million -- the maximum allowed by league rule.

"Words that I deeply regret now overshadow nearly two decades of building organizations that brought people together -- and strengthened the Phoenix area -- through the unifying power of professional men's and women's basketball," Sarver wrote. "As a man of faith, I believe in atonement and the path to forgiveness. I expected that the commissioner's one-year suspension would provide the time for me to focus, make amends and remove my personal controversy from the teams that I and so many fans love."

Barely a week later, Sarver evidently realized that would not be possible.

His decision comes after a chorus of voices -- from players such as Suns guard Chris Paul and Los Angeles Lakers star LeBron James, to longtime team sponsors like PayPal, and even the National Basketball Players Association -- said the one-year suspension wasn't enough.

James weighed in again Wednesday, shortly after Sarver's statement went public: "I'm so proud to be a part of a league committed to progress!" he tweeted.

Added retired NBA player Etan Thomas, also in a tweet: "Sarver is cashing out so this is not really a punishment for him but definitely glad he will be gone."

NBPA President CJ McCollum said the union thanks Sarver "for making a swift decision that was in the best interest of our sports community."

Suns vice chairman Jahm Najafi called last week for Sarver to resign, saying there should be "zero tolerance" for lewd, misogynistic and racist conduct in any workplace. Najafi, in that same statement, also said he did not have designs on becoming the team's primary owner.

"I do not want to be a distraction to these two teams and the fine people who work so hard to bring the joy and excitement of basketball to fans around the world," Sarver wrote. "I want what's best for these two organizations, the players, the employees, the fans, the community, my fellow owners, the NBA and the WNBA. This is the best course of action for everyone."

Sarver, through his attorney, argued to the NBA during the investigative process that his record as an owner shows a "longstanding commitment to social and racial justice" and that it shows he's had a "commitment to diversity, equity, and inclusion." Among the examples Sarver cited was what he described as a league-best rate of 55% employment of minorities within the Suns' front office and how more than half of the team's coaches and general managers in his tenure -- including current coach Monty Williams and current GM James Jones -- are Black. 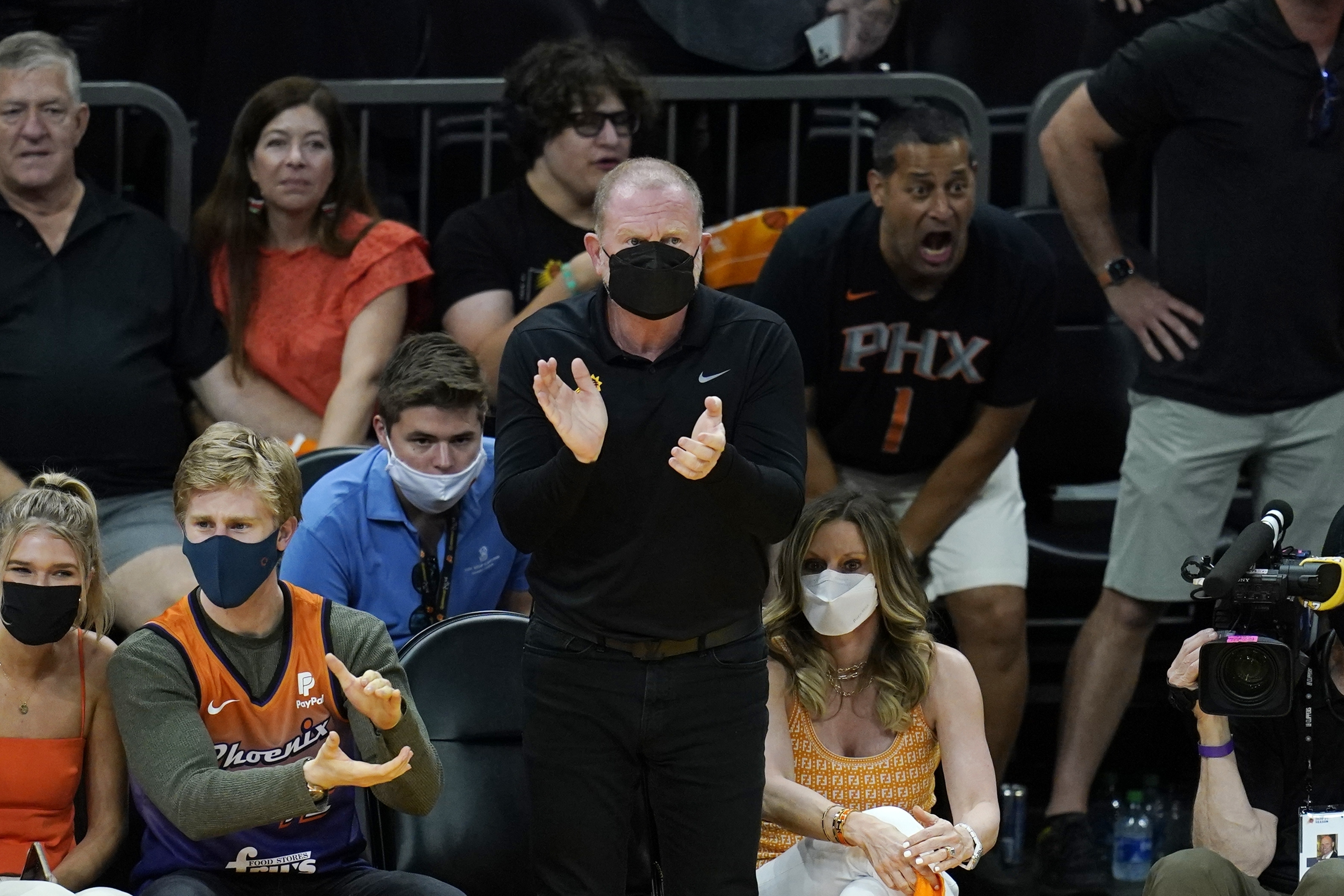 FILE - Phoenix Suns owner Robert Sarver applauds his team during the second half of Game 1 of the NBA basketball Western Conference finals against the Los Angeles Clippers, Sunday, June 20, 2021, in Phoenix. The Suns defeated the Clippers 120-114. Robert Sarver says he has started the process of selling the Phoenix Suns and Phoenix Mercury, a move that comes only eight days after he was suspended by the NBA over workplace misconduct including racist speech and hostile behavior toward employees. Sarver made the announcement Wednesday, Sept. 21, 2022, saying selling “is the best course of action.” He has owned the teams since 2004.(AP Photo/Ross D. Franklin, File)