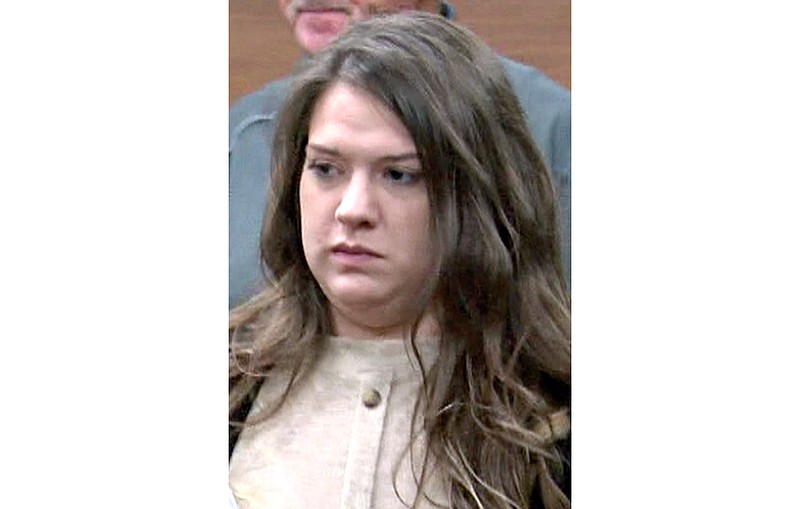 Connie Griffin, mother of Parker's boyfriend, Wade Griffin, testified on Monday and Tuesday about her son's relationship with Parker.

On Monday, Assistant District Attorney Kelley Crisp asked Connie Griffin what her perception of Wade and Parker's relationship was.

"She (Parker) seemed to want a close relationship. I could not tell if he wanted that or was standing back. There were some red flags. One was that she didn't have custody of her son," Connie Griffin testified.

Connie Griffin also testified Monday that Parker's arrest has been stressful for her entire family.

On Tuesday, Connie Griffin testified that she tried to expose Taylor Parker's alleged lies and fraud to her son Wade, and that in the aftermath of Reagan Hancock's murder she wished she had tried harder.

"I know, but you always have doubts," Connie Griffin said as she cried softly. "I thought it would end with a miscarriage because I knew she wasn't pregnant."

Harrelson questioned Connie Griffin on Tuesday morning about why she did not confront Parker at a gender reveal or any other time before Oct. 9 if she believed she was not pregnant.

"Miss Griffin is not on trial," Crisp said. "Your family had no idea what would happen to Reagan Hancock, did you? Did your mind go to her going into a woman's house and slashing her baby out of her?" Crisp asked.

On Wednesday, jurors heard the 911 call Reagan Hancock's mother Jessica made after discovering her daughter had been murdered. They also heard the 911 call Taylor Parker made where she claimed she was about to have her baby in the car on U.S. Highway 82 en route to Idabel.

Jurors also heard testimony from Texas Department of Public Safety Trooper Lee Shavers, who stopped Parker for speeding that morning and saw she had a newborn baby in medical distress on her lap.

"The driver was waving out the window. I could hear a female voice on a 911 call," Shavers said. "I asked her what's wrong and I could see on her lap a newborn baby, umbilical cord attached to the baby's navel. She told me she had just had a baby and was trying to get to the hospital in Idabel."

Jurors also heard testimony from a nurse who stopped to render aid to the infant and also cared for Parker.

Wednesday's testimony ended after Reagan Hancock's husband, Homer, took the stand and testified about the night before the murder and the morning of the murder when he could not reach Reagan on the phone.

On Thursday, the jury listened to Jessica Brooks as she recounted the horrifying sight of finding her slain daughter.

Reagan Hancock was face down on the living room floor in what a Bowie County investigator later testified was a "shocking crime scene."

"Her red hair was what stood out -- and her hair was blonde, about the color of yours," Brooks said softly under questioning from Assistant Bowie County District Attorney Kelley Crisp.

"I knew from all of the blood that she was gone," Brooks said. "I think I screamed because I didn't know what to do. I think I fell to my knees and then I called 911."

Chad Ford, who was a Bowie County Sheriff's Office investigator at the time of the killing, also testified Thursday. He was dispatched about 10:30 a.m. to the Hancock's house on Austin Street. He testified that in his extensive experience with crime scenes, the Hancock house was "probably the bloodiest crime scene I've ever been to."

Ford described the crime photos to Crisp as she showed them to the jury.

A paramedic with LifeNet also described responding to the house to determine if Reagan Hancock's unborn baby could possibly saved, only to learn the baby was gone.